Accessibility links
The Holy Life of the Intellect Canadian poet George Bowering says we experience the mind of another person when we enjoy poetry, jazz or love. He believes this vision of human intellect is the closest thing we have to the divine.

Listen
The Holy Life of the Intellect 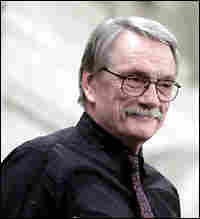 George Bowering is Canada's first poet laureate and the author of over 80 books. A native of British Columbia, he has worked as a professor, editor and writer. Bowering is a member of the Order of Canada, the country's highest civilian honor. Above, he stands to be recognized in the House of Commons in Ottawa in 2002. Jim Young/Reuters/Corbis hide caption

I believe that the human intellect is the closest thing we have to the divine. It is the way we can join one another in spirit.

Sometimes when you are listening to a great jazz musician performing a long solo, you are experiencing his mind, moment by moment, as it shifts and decides, as it adds and reminds. This happens whether the player is a saxophone player or a bass player or a pianist. You are in there, where that other mind is. His mind is coming through your ears and inside your mind.

The first time I heard Charlie Parker playing "Ornithology," I was delighted. I was about 11 years old. You are so much alone with your mind as a kid, so when you hear someone else's mind improvising, you feel an excitement you will never get from some music that just wants to keep a steady beat.

I got that delight again when I first heard great improvisatory poetry. When I read "The Desert Music" by William Carlos Williams, the book fell out of my hands and made a loud splat on the library's concrete floor. Later I would hear the poet Philip Whalen call this kind of poetry "a graph of the mind moving." Yes, it is.

It can happen with prose, too — sentences you hear in your head and know how they felt inside another's. I believe that if there is a god, this is what he wanted us to do. It is the holy life of the intellect.

If we can experience another's mind in our own, we know that love is possible. We understand why the great poet Shelley wrote a poem to what he called "Intellectual Beauty," and called it an invisible power that moves among the things and people of this Earth.

It descended on him when he was a youth looking for wisdom from the words of the dead. Intelligence literally means "choosing among." Shelley called it the spirit of delight. It is the gift of wit, which literally means the kind of seeing that makes you smile and clap your hands together. I believe that this provokes what the Greeks called agape, the Romans called caritas, and what we settled for as love. It's greater than hope and faith, according to St. Paul of Tarsus in an otherwise questionable letter to the Corinthians.

If you want to hear it happen rather than suffer any more of my apostolic prose, listen to the improvisation by John Coltrane in his immortal album called "A Love Supreme." There we are: A fine intellect, a tenor saxophone and a reach for perfect prayer.

This essay was produced by Anne Penman for the Canadian Broadcasting Corp. NPR's This I Believe is independently produced by Jay Allison and Dan Gediman with John Gregory and Viki Merrick.