Accessibility links
Prehistoric Whale Ate Other Whales For Breakfast Modern day sperm whales have tiny teeth and eat squid. But this ancient sea monster devoured other whales. Researchers have discovered the gigantic head and 15-inch-long teeth of this sperm whale ancestor. Named for the author of Moby-Dick, Leviathan melvillei lived about 13 million years ago. 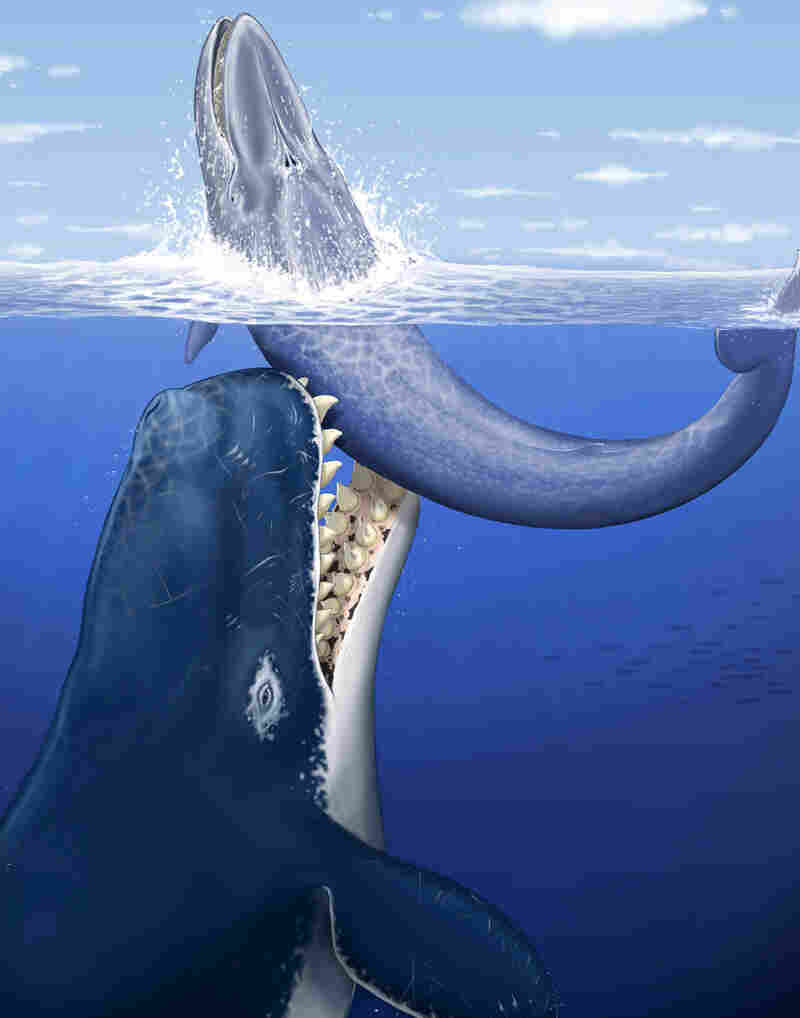 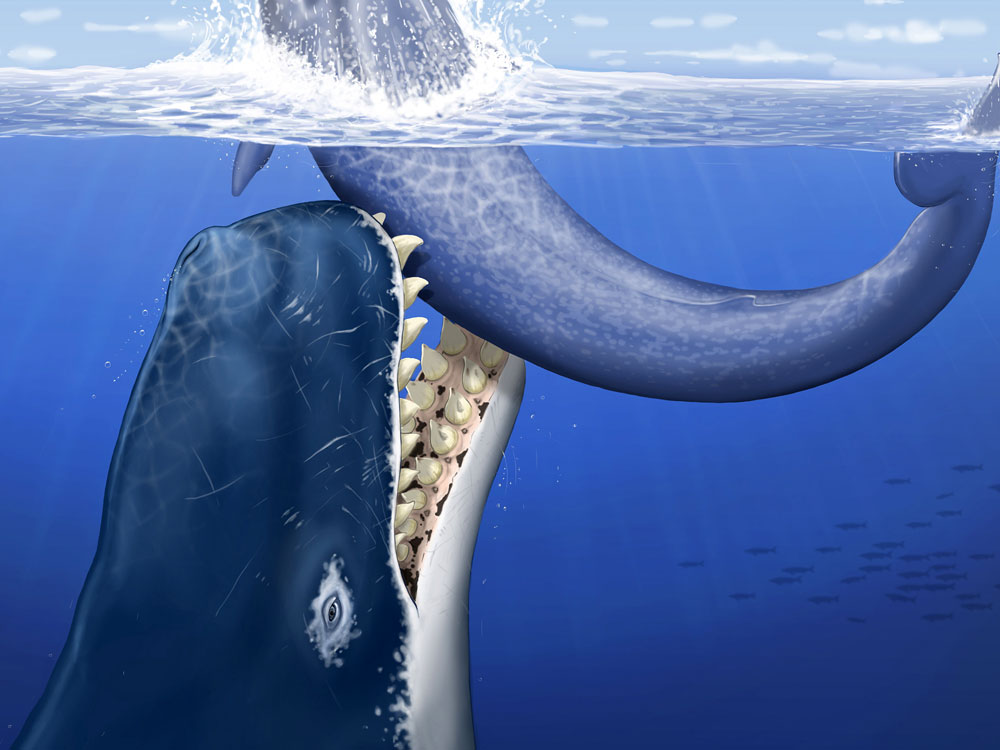 The Leviathan melvillei attacks a medium-size baleen whale in this artist's rendition.

Rarely do scientists get to publish a research paper that begins with the words "The Giant Bite." On Wednesday, fossil hunters from Europe did just that. They've discovered one of the biggest predators that ever lived: a whale -- one that devoured other whales and probably anything else it had an appetite for.

"I love the book," he says. "So, it was the reason why we selected that species name."

Lambert is with the Royal Belgian Institute of Natural Sciences, and you might call him a modern-day Ahab, though what he's after are the whitened bones of extinct whales. Two years ago in a Peruvian desert, his team found some from a sperm whale that lived and died some 12 to 13 million years ago -- when the desert was underwater.

An Animal To Sink Your Teeth Into

But this wasn't the kind of gentle giant we know nowadays. Our sperm whales have tiny teeth and feed by sucking squid into their capacious mouths. Most other whales don't have teeth at all. They filter-feed on plankton or shrimplike krill.

These are probably the largest teeth that I have ever seen.

But Leviathan had an astonishing set of choppers. "These are probably the largest teeth that I have ever seen," says Lambert. "The maximum length of some of the teeth is 36 centimeters."

That would be about 15 inches long -- and 4 to 5 inches wide at the base. "It looks like an elephant tusk," Lambert says of the whale's tooth. "It's really big."

The mouth was about 9 feet long and up to 7 feet wide. The upper and lower teeth interlocked when the mouth closed -- good for securing prey and ripping through flesh. And the skull suggests very powerful biting muscles, thus the "giant bite" in the title of the research paper, which appears in the journal Nature.

A Whale Of A Killer

At over 50 feet in length, Leviathan probably ate anything it wanted to, but other whales -- the toothless kind -- were probably its main prey.

Lambert says scientists had found big teeth like these before and suspected a toothy, predatory whale once existed, but skeletal evidence had been elusive. "We were just amazed by this specimen," he says. "It was a very exciting moment because we knew about the existence of very large sperm whales, but no skeleton had been found."

Now that it has -- at least the jaws and teeth -- it's clearer than ever that the ocean 13 million years ago was a hopping place, and Leviathan would not have been alone.

"You have the ancestors of the killer whales," Lambert says. "And we could imagine that there was some competition between the two groups."

And they would have been in competition with Megalodon, the biggest shark that ever lived.

Leviathan would have been the heavyweight in this crowd of top predators. No doubt he'll soon be terrorizing moviegoers at your local multiplex cinema. Steven Spielberg, are you on this?