Accessibility links
Rachel Robinson: Reflections Of A Trailblazer She helped field the slurs and death threats and felt the weight of history as her husband, Jackie Robinson, broke baseball’s color barrier in the 1940s. Now 87, Rachel Robinson tells NPR about her experience as a newlywed during spring training in Jacksonville, Fla., in 1946. 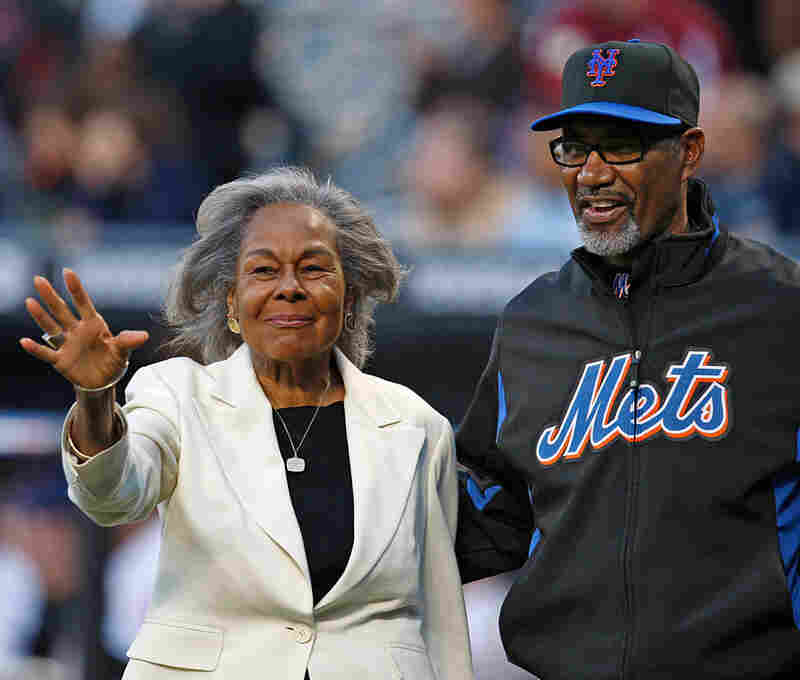 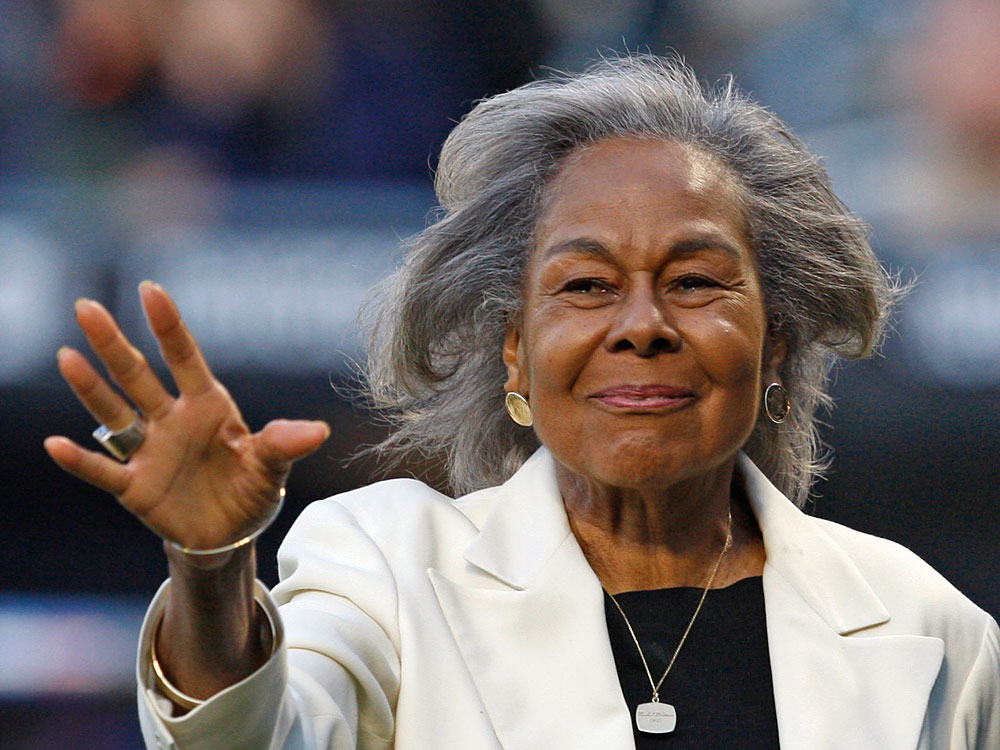 Jackie Robinson's widow, Rachel, who's a Mets and Dodgers fan, helped honor her late husband before a Mets baseball game against the Chicago Cubs in April. Mets manager Jerry Manuel is at right.

Baseball legend Jackie Robinson did not march into history by himself. His widow, Rachel Robinson, was often by his side as he broke baseball's color barrier.

Rachel, like Jackie, felt the weight of history -- the taunts, the death threats, the constant scrutiny -- but how she bore that burden hasn't been widely reported.

Rachel Robinson is in Washington, D.C., to receive honors at a congressional baseball game and to promote her work with the Jackie Robinson Foundation.

At 87, she is still active and willing to look back with laughter at some of the painful chapters of her life. One of them came in 1946, when she and her husband traveled as newlyweds to spring training in Daytona Beach, Fla., for the newly integrated Brooklyn Dodgers farm team.

"We were bumped from two planes, and white passengers were put on those planes," she tells NPR's Michele Norris. "We had to stay overnight in one city before we could catch a bus the rest of the trip to Daytona Beach. We came from California -- and I knew what discrimination was -- but it wasn't a legislated thing like it was in the South. When I got to Jacksonville, I just walked into the white ladies' restroom just to recover some of my dignity and my sense of myself because I was horrified by it."

She says she and her husband recognized the racism as soon as they arrived in Florida.

"When we got on the bus in Jacksonville, we just sat where there were empty seats. But the bus driver stopped the bus and told us to move to the back bench. And when we moved to the back bench, the back bench was filled. And what the black people had done to accommodate new people on the bus is to sit up and sit back. Everybody is on a little bit of the bench. So it was flagrant and it was right there in front of us so there was no way of missing it. And we knew that we were up against something very new."

When we got on the bus in Jacksonville, we just sat where there were empty seats. But the bus driver stopped the bus and told us to move to the back bench. ... So it was flagrant and it was right there in front of us so there was no way of missing it. And we knew that we were up against something very new.

Jackie's mother, Mallie, anticipated what the young couple might face.

"She gave us a box of fried chicken, and we were both looking at each other with cross-eyes, like, 'What do we do with fried chicken on the plane?' That fried chicken came in very handy. Once we found out that we couldn't go into the dining rooms, we decided that we would not eat until we got to our location. But the fried chicken was a gift and Mallie knew that."

When Jackie started training, Rachel says, the players were not very welcoming.

"There was no grand welcome," she says. "And it was gradual thing when they could see that Jack was going to be the kind of teammate that would help them win games. They came around."

Later on, when Jackie was in the majors and playing in Baltimore, that's when the "trouble started in the dugout," Rachel says. The players and coaches and managers were yelling at them.

"I just sat there kind of stunned that this could happen," she says. "And my only thought was to protect Jack. I mean the whole protective thing that women feel and I felt intensely with him. So all I could do was sit up taller -- it [was] a fantasy that my back could block some of that stuff that was coming at him out of the stands. And then to know that he was going to play so well they weren't going to be able to keep it up."

She says she protected him by being stoic and by being there. She also says she was seated with the other wives, but she didn't try to make friends with them.

"But gradually I would talk to one or two. When the team is winning, the wives are all excited and it makes it easier to be able to befriend each one," she says.

"I want to see more African-Americans involved," she says. "I want to see them in positions like managerial positions. It's been slow to happen, and in fact there's been some decline in the number of African-American players in the game. Major League Baseball has to really have the desire to make this happen. We'll see."