Accessibility links
Child Sex Abuse Case Brings Tough Laws To Delaware The state has enacted new laws to toughen oversight on medical practitioners. The Bradley Bills are named for Dr. Earl Bradley, a pediatrician charged with sexually abusing more than 100 patients in a Delaware beach town. The new rules require that a chaperon be present during exams and that doctors be fingerprinted. 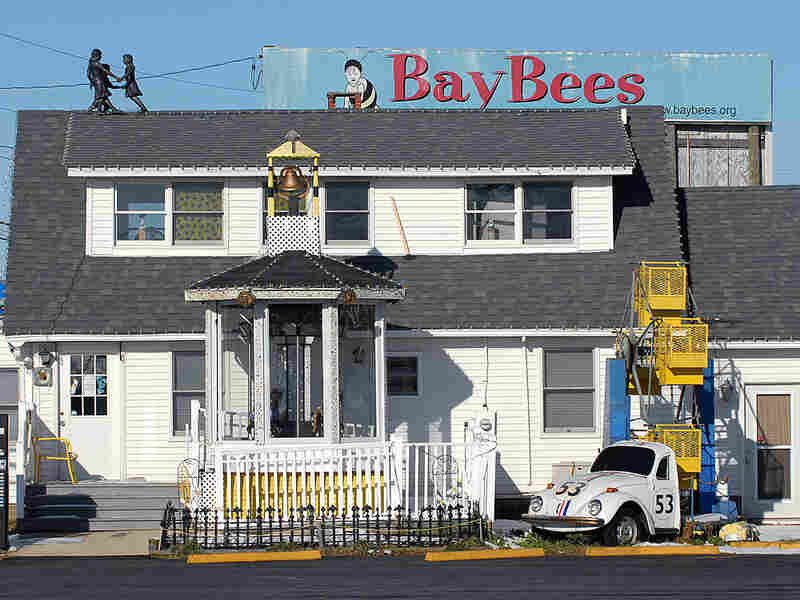 The "BayBees" children's pediatrics office of Dr. Earl Bradley is shown, above, weeks after Bradley was accused of molesting dozens of children at his practice, and, below, after workers removed the signs and attractions, which included a mini-Ferris wheel and carousel. AP hide caption 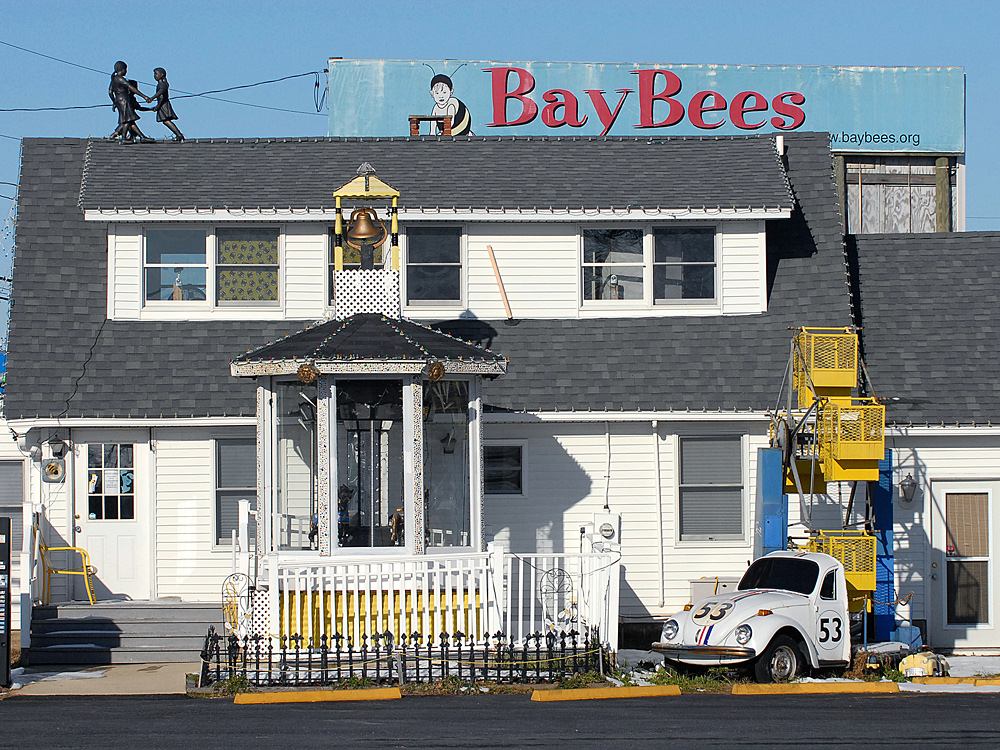 The "BayBees" children's pediatrics office of Dr. Earl Bradley is shown, above, weeks after Bradley was accused of molesting dozens of children at his practice, and, below, after workers removed the signs and attractions, which included a mini-Ferris wheel and carousel. 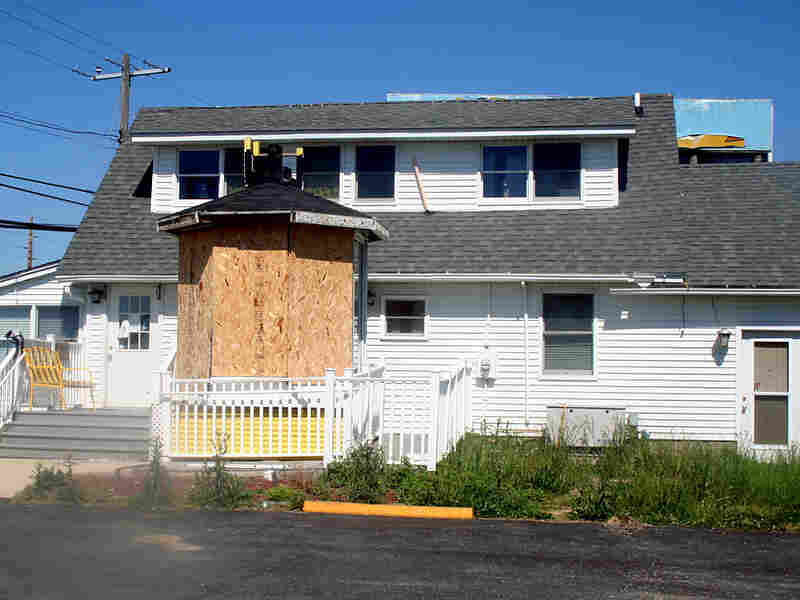 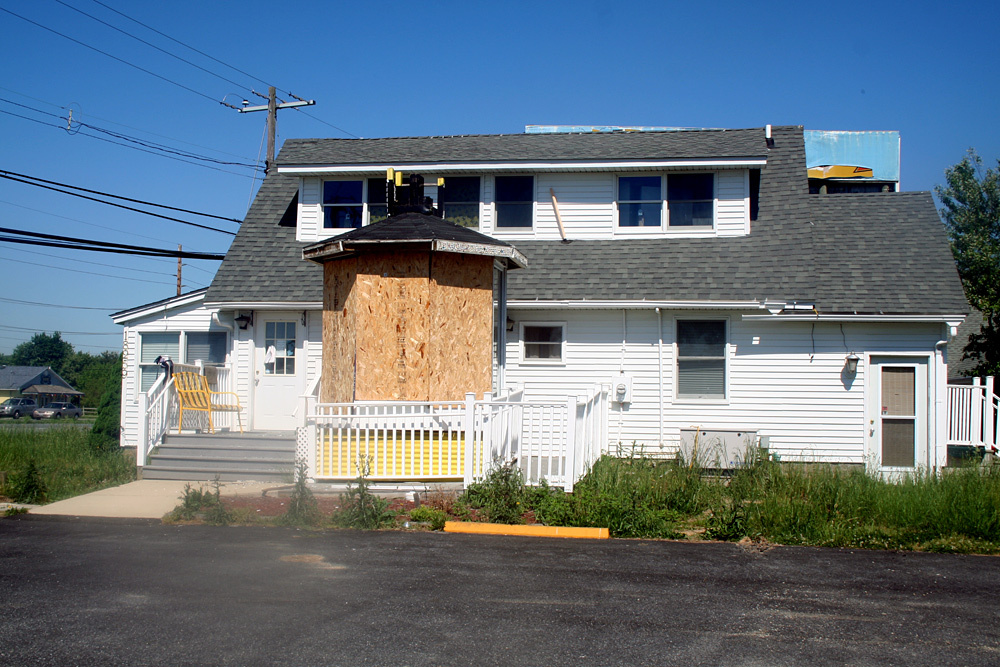 In Delaware, legislators have swiftly passed a package of bills that would toughen oversight of the state's medical practitioners and those who monitor them. The new laws were prompted by the case of a pediatrician who was charged with abusing patients as young as 3 months old.

The rules have been called the Bradley Bills, after Earl Bradley, the pediatrician currently behind bars on charges of abusing nearly 130 young girls and a boy. Bradley operated out of an office on the coastal highway in the beach town of Lewes.

He'd worked there for years before a complaint last year by one girl's mother prompted police to investigate.

"These are the right steps," says Gov. Jack Markell. "This is certainly nothing to celebrate, but I think it's a positive, that a bipartisan group of legislators came together to do the right thing."

When Markell signed the bills in Dover, he was flanked by Attorney General Beau Biden, whose office helped draft the legislation. Earlier this year, Markell ordered an independent investigation into how Bradley might have been able to operate for so long.

Linda Ammons, dean of the law school at Widener University, investigated for four months and issued her report in May.

"People weren't scrupulously following the law," Ammons says. "It says that if you think a physician is impaired or should not be practicing for a variety of reasons, there are certain actors who are supposed to report that to a certain entity -- so balls were dropped all along the way."

Ammons made 68 recommendations in her report, many of which made it into the final legislation. The bill was approved unanimously in both houses.

The changes include requiring that doctors be fingerprinted every 10 years, to help with background checks. Everyone applying for a medical license in Delaware will have to say whether they've been investigated in the past.

And every six months, the medical licensing board will check the criminal histories of every licensed doctor in the state. One of the red flags in the Bradley case that authorities might have used against him was that he'd been investigated when he practiced in Philadelphia -- more than a decade before he arrived in Delaware.

"We think the way the bill's written now will allow for appropriate protections and appropriate chaperon policy," says Wayne Smith of the Delaware Healthcare Association, which represents the state's seven medical centers.

Smith is talking about another change mandated by the law: Children may be physically examined by doctors only when a chaperon is present. Smith says hospitals are working out individual policies that will go into effect later this summer.

Much of the scrutiny into the Bradley case has focused on the local Lewes hospital, where Bradley served as an on-call pediatrician. The hospital is also being investigated for not following up on complaints against him. Smith says any action against the Beebe Medical Center will affect the whole town of Lewes.

"Beebe hospital is and will remain the lifeblood and the core of the Lewes community," Smith says.

And there is real concern that lawsuits will hurt the hospital's finances, something all of its employees rely on. And that is just another example of how the fallout in the Bradley case has affected everyone in this small town.