Accessibility links
'Airbender': A Kid Flick With Little To Lure Parents The Last Airbender is based on the cartoon Avatar: The Last Airbender. Kenneth Turan notes that one of Hollywood's truisms is, 'If you don't hook the parents, they'll never take the kids' -- and wonders if Airbender will prove that rule or break it. 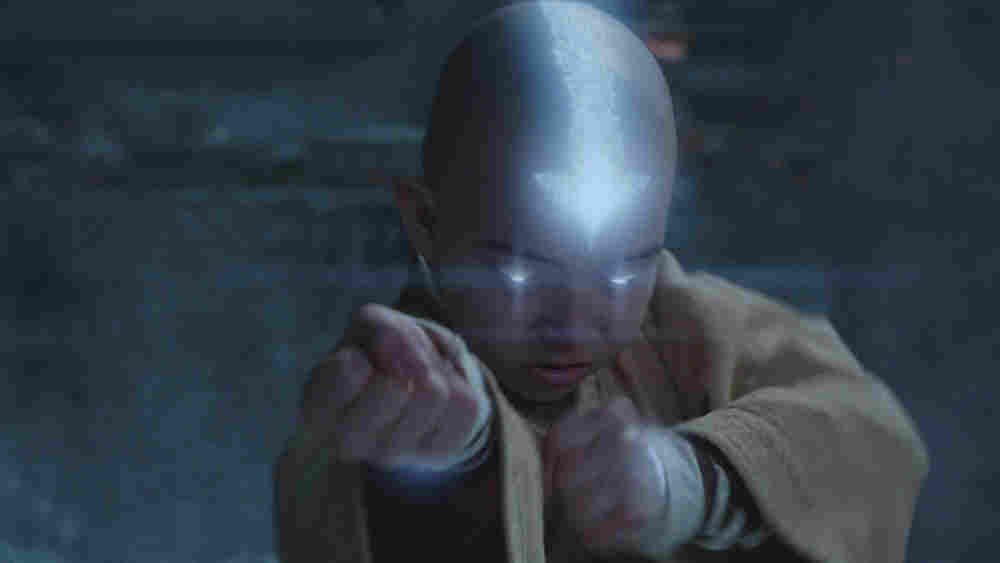 'Aang Through The Courtyard'

The best films for kids have always had something for adults in them. That was true when The Black Stallion came out 30 years ago, and when Toy Story 3 came out last month.

So one problem with The Last Airbender is that it's pegged almost exclusively to the small-fry state of mind that earned fans for the original Nickelodeon series.

Like that TV show, M. Night Shyamalan's film takes us to a self-contained mythic universe inhabited by four tribal peoples: the air nomads, the water tribe, the earth kingdom and the fire nation. Each group has chosen people called "benders" who can, yes, bend their particular element to their will.

A shaman called an avatar once kept the four tribes in harmony -- but he's been gone for 100 years, and war has broken out in his absence.

The film gets going when the young avatar, who's been trapped in an iceberg, is rescued by a brother and sister. As the avatar tries to recover his powers, the siblings try to protect him from the evil all around.

The Last Airbender retains the Asian feeling of the original shows, including liberal doses of martial arts, tai chi, Buddhist philosophy and Tibetan religion -- even though the three protagonists are played by white actors. The film's determinedly unsophisticated dialogue is pitched to resonate with parents of the New Age persuasion, with lines like "You must let anger go," "There is no love without sacrifice" and the ever-popular "Is there a spiritual place where I can meditate?"

Speaking of truisms, it is one of Hollywood's articles of faith that if you don't hook the parents, they'll never take the kids. Casting controversies aside, it will be interesting to see if The Last Airbender proves that rule or breaks it.