Accessibility links
Maywood, Calif., Outsources City Hall Operations Faced with skyrocketing insurance costs, rather than declare bankruptcy, Maywood, Calif., has decided to outsource its operations -- including its police force -- to neighboring cities. The arrangement begins July 1. Could such a consolidation of resources be the wave of the future for smaller cities across the country? 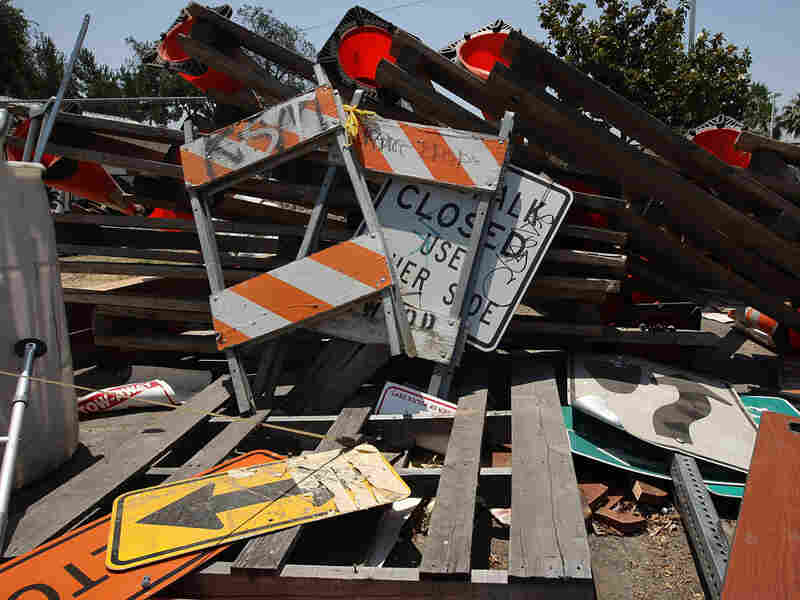 Road and construction signs lay in a pile in Maywood, Calif. The city hands over its municipal operations to a neighboring city on July 1. David McNew/Getty hide caption 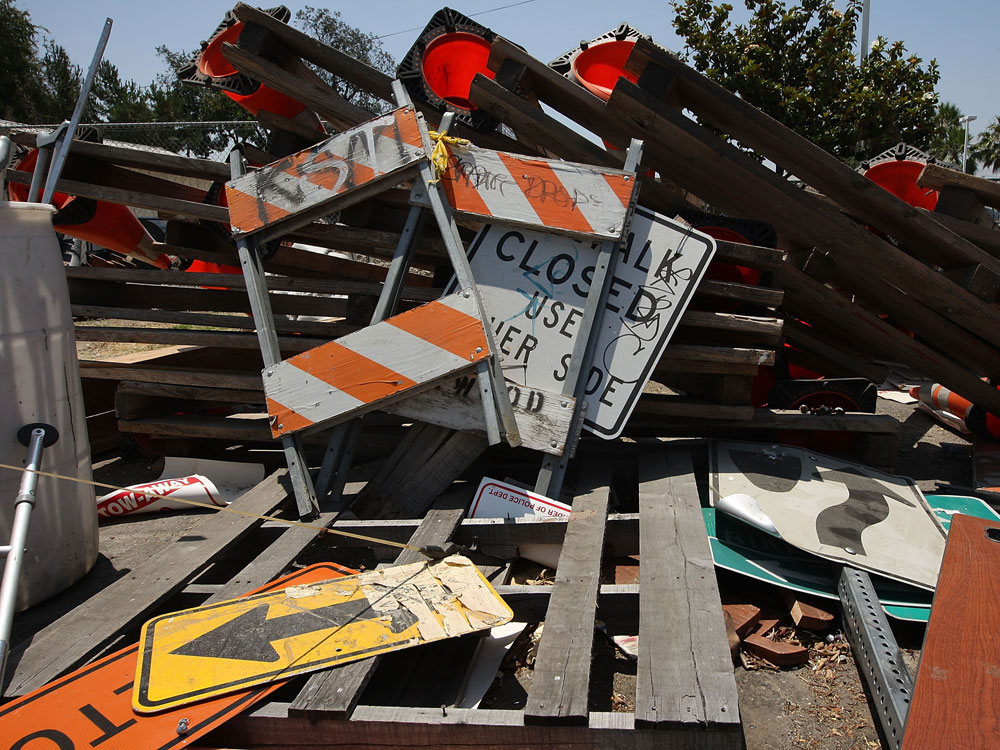 Road and construction signs lay in a pile in Maywood, Calif. The city hands over its municipal operations to a neighboring city on July 1.

Faced with skyrocketing insurance costs, rather than declare bankruptcy, the city of Maywood, Calif., has decided to outsource its operations -- including its police force -- to neighboring cities.

Maywood city leaders say, as of Thursday, they'll fire all of their employees and instead pay a fee to outsource municipal operations to the neighboring city of Bell and the Los Angeles County Sheriff's Department.

During a recent news conference, Maywood Mayor Ana Rosa Rizo said the contracts were "in the best interest of our residents and our community." She said contracting out operations from City Hall is the only way her hometown can continue.

Maywood is one of the smallest of the 88 cities that make up Los Angeles County. It's just a little more than 1 square mile and has 30,000 official residents -- 45,000 if you count the undocumented immigrants who live there. That makes it one of the most densely populated cities in the United States.

This working-class community isn't suffering -- at least not directly -- because of a decline in local property taxes.

What's plaguing the 86-year-old city is $12 million in lawsuits against its troubled police force. Allegations of assault and civil rights violations have led to the cancellation of the city's liability insurance and workers' compensation last month.

Councilman Felipe Aguirre says outsourcing will make Maywood less of a risk and allow it to get back on financial track.

Across the country, governments and agencies typically contract out for some services. Proponents say it's more efficient, and allows dollars to stretch further. 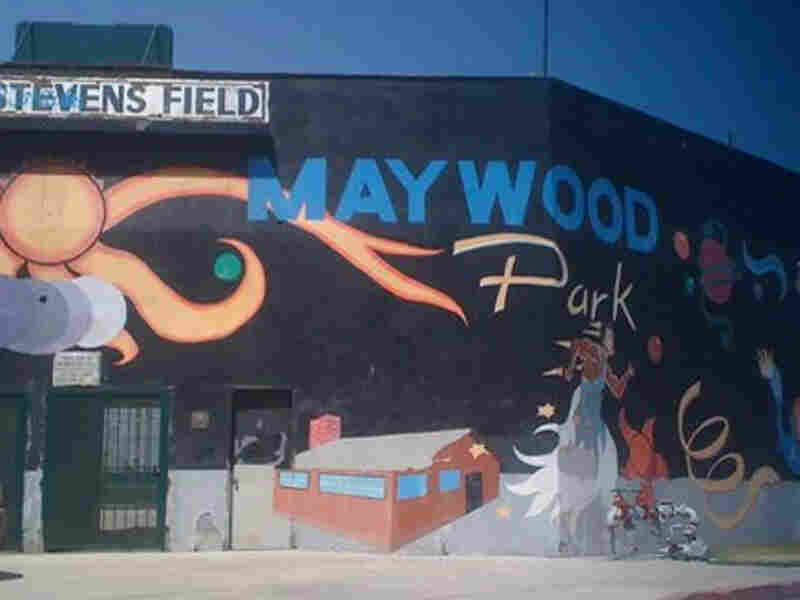 Maywood, Calif., Parks and Recreation programs will be handed over to a neighboring city, Bell. City officials say operations will be uninterrupted in the transfer of management. Lisa Napoli for NPR hide caption 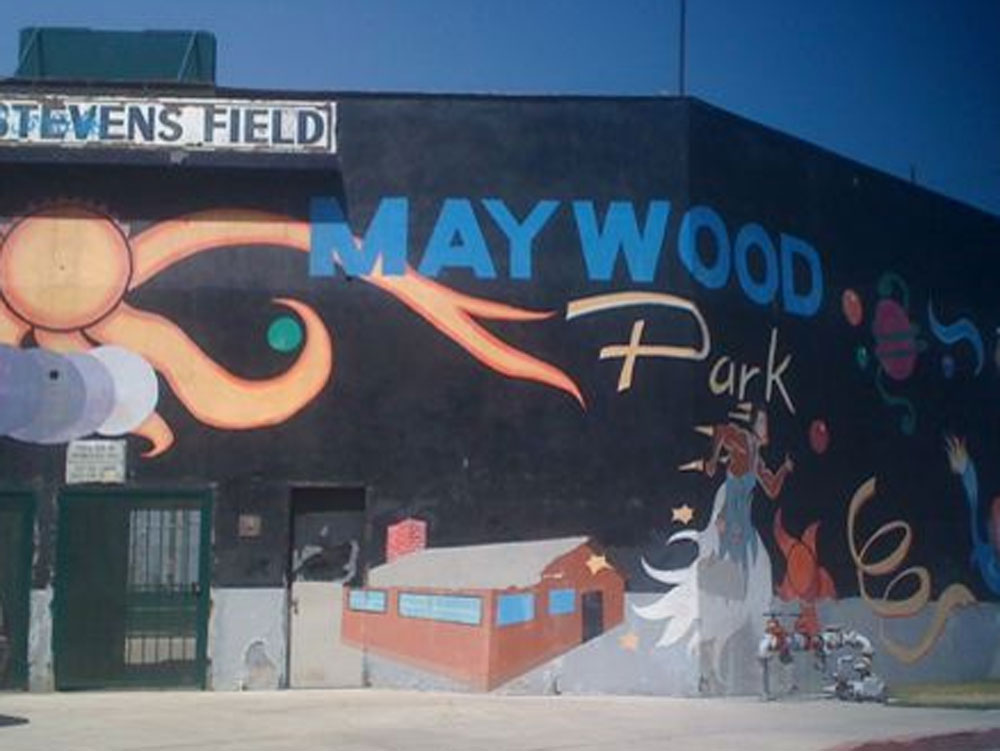 Maywood, Calif., Parks and Recreation programs will be handed over to a neighboring city, Bell. City officials say operations will be uninterrupted in the transfer of management.

But Sam Olivito of the California Contract Cities Association says he's never seen an extreme like Maywood. He says usually a city's decision to outsource for services is made over time, deliberately and in consensus with its citizens.

"Everyone that is in public service today -- public life or is a council person -- feels deeply saddened by what they had to go through. And it's a worry because it will drain our entire system if a lot of these things happen," Olivito says.

He says outsourcing key services can lower costs because the risk pool is greater.

But the downside is that each city's unique problems can wind up being overlooked.

Rizo says that doesn't seem to be a deterrent to other cities.

"Our city has already been asked for our documents of joint municipal services because this is the wave of the future. We're leading the way in this kind of regionalist way of looking at things and really pooling our resources to offer the best quality services for our community," Rizo says.

And for now, until it can sort out its finances, Maywood feels those services are best administered from outside its borders.