Accessibility links
Havana: Refined Cuban Fare in Homey Atmosphere Paladars are modest restaurants in Cuba run out of private homes or apartments. Foreign editor Loren Jenkins says no paladar on the island offers food as interesting and good as Havana's La Guarida — if you can find its out-of-the-way location. 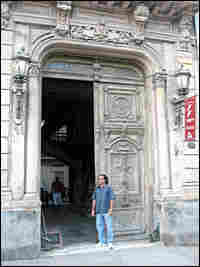 Paladars are modest restaurants operated out of private homes or apartments. La Guarida in Havana is housed in a shabby, out-of-the-way apartment. But the food is worth the trip, writes Loren Jenkins. hide caption 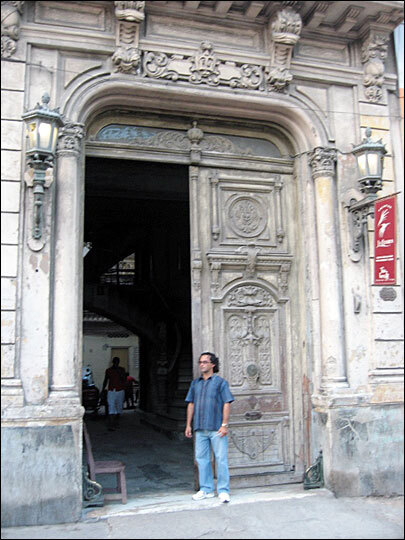 Paladars are modest restaurants operated out of private homes or apartments. La Guarida in Havana is housed in a shabby, out-of-the-way apartment. But the food is worth the trip, writes Loren Jenkins. 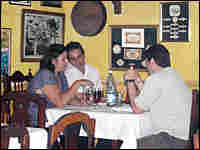 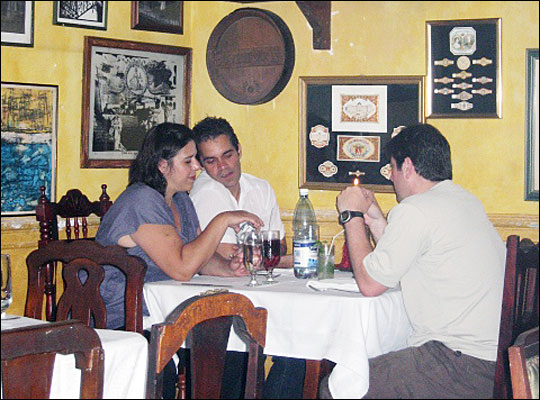 The walls of La Guarida's dining room are covered with paintings, drawings and photographs by Cuba's leading artists.

Cuba is not a place one visits particularly for its refined cuisine. Cuban fare is pretty basic: grilled pork or chicken, fresh fish and the proverbial rice and beans — moros y cristianos — with sides of fried bananas and yucca.

And for the first 36 years of the Cuban revolution, there were only state-run restaurants characterized by abysmal service and mediocre cooking.

But in 1995, the Castro government cautiously opened up the restaurant business to free enterprise, allowing small eateries to be run out of private homes or apartments. Called paladars, these modest restaurants — which by law are not supposed to serve more than 12 people at a time (though they routinely do) — have vastly improved the Cuban eating experience.

No paladar on the island offers as interesting and good food as Havana's La Guarida. Located in a shabby, out-of-the-way old apartment in central Havana, it still resembles the Third World film set it once was when the late Cuban director Tomas Gutierrez Alea set his 1994 film Fresa y Chocolate (Strawberry and Chocolate) there. La Guarida oozes with impoverished, Bohemian atmosphere.

Getting there is the first test. Most taxis have a hard time finding the restaurant. That's because it is located outside the commercial district, down a narrow side street lined with pre-revolution cars with fins and shiny, chrome hood ornaments.

Once you've found La Guarida, you'll pass through a giant, scarred door into an area where greasy motorbikes are parked, and mount a once-grand, curving staircase. On your way up, you'll pass a headless marble statue and what had been a second-floor ballroom (now strung with drying laundry), before reaching the third-floor apartment door that opens into the restaurant.

Old movie posters decorate the entryway, which leads to a tiny, crowded kitchen and three small rooms with dining tables and walls covered with paintings, drawings and photographs by Cuba's leading artists. The ambience is cozy, and the reception by owner Enrique Nunez and staff is warm and welcoming. It feels like the private home it once was.

And there are no disappointments in the food. The chef offers up an amuse bouche of zesty gazpacho. There is a finely diced, delectable Cuban ceviche. The red snapper sauteed in an orange sauce and medallions of succulent pork simmered with fresh mangoes are also highly recommended.

The wine list offers up a great selection of wines from Spain, Italy, France, Chile and Argentina, while the desserts range from coconut ice cream served over fresh pineapple to the house specialty, chocolate delight made with three milks.