Accessibility links
The Two Sides Of Jewel: 'Sweet And Wild' In the 1990s, the singer-songwriter's debut album helped usher in a new wave of female musicians and established her as a folk powerhouse. Over the next decade, Jewel's repertoire expanded to include pop and country music. Her latest album, Sweet and Wild, holds true to her newer sound but revisits her folk roots with a bonus disc of acoustic versions. 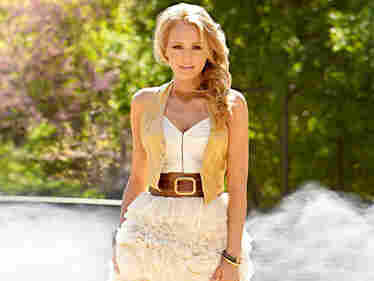 Jewel's debut album, Pieces of You, helped usher in a new wave of female singer-songwriters in the '90s. Her hit songs, including "Foolish Games," "Who Will Save Your Soul" and "You Were Meant for Me," established Jewel as a folk powerhouse. Over the next decade she expanded her repertoire to include pop and country music. Her new album, Sweet and Wild, embraces it all.

The deluxe edition of Sweet and Wild includes a bonus disc, entitled Sweet and Mild, containing stripped-down, acoustic versions of her new songs. Jewel tells Scott Simon, host of NPR's Weekend Edition Saturday, that she wanted to give listeners the opportunity to hear the songs as they were first written.

"I think when you hear the songs just as I wrote them, you can hear them as they are meant to be heard, in my opinion," she says. "They're really emotional. You can really connect with that before they have to get dressed up and told what market they're going to and what genre they're going to."

The daughter of two musicians, Jewel grew up in Alaska singing in bars and honky-tonks with her dad and brothers. She only picked up the guitar at age 16 to help support herself while she hitchhiked through Mexico.

From Hitchhiking To 12-Times Platinum

Jewel's journey yielded both stories and songs. One of them was the future hit "Who Will Save Your Soul," later included on her 1995 debut. Though Pieces of You went on to go 12-times platinum, it wasn't an immediate success.

"It failed at radio, and my label asked me to give up on it and go into the studio and record a second one, which I had started doing," she says. "But then Bob Dylan asked me to tour with him."

She quit the second album and hit the road. She says Dylan mentored her, critiquing her lyrics, giving her music to listen to and books to read. Next, she toured with Neil Young, who encouraged her to keep touring and supporting her album. She followed their advice, and 14 months after its debut, Pieces of You became a hit.

Her latest release, Sweet and Wild, takes its cues both from the stripped-down tradition of her debut and her more recent pop flavor.

For example, Jewel says she wrote "Fading" when she was 19 or 20, inspired by a moment of fear and doubt she experienced in a bathroom at Wal-Mart.

"I just had a very surreal moment of thinking, 'What am I doing here? I'm an Alaskan ranch girl. I used to be so healthy, and here I am so pale and anemic,' " she says. "[It] was really a questioning-myself moment."

Another song, "Satisfied," reflects on Jewel's views on balancing life and career. She says that in the midst of juggling acting with music, she realized she had to prioritize and spend time in a way that makes her happy. She stepped away from acting, quit touring parts of the world and even turned down work in order to spend time with the people she loves, including her husband, professional cowboy Ty Murray.

"I want my whole life to be a great work of art, not just my art," she says. "And that means paying attention to my entire life and trying to make sure my whole life is balanced."