Accessibility links
Monet The Gardener: Life, And Art, Grow At Giverny After he moved to the town that would be most associated with him, Monet worked hard to design the waterlily pond and gardens immortalized in his later paintings. In the last of three stories, Susan Stamberg visits Monet's home at Giverny, where he spent nearly half his life.

By the time painter Claude Monet moved to Giverny, 45 miles outside of Paris, he and his first wife, Camille, had already lived in Le Havre, Paris, Etretat, Argenteuil and Veutheil. In fact, the Monets moved around a lot -- sometimes at night to avoid angry landlords -- but it wasn't until the painter spotted the village of Giverny from a train in Normandy that he began to build himself a home.

"He looked out the window and saw this charming village. So he just got off the train," says Normandy tour guide Brigitte Mueller. "He walked until the first pub, sat down, had a big jug of cider and talked to the local people."

Monet learned that a local carpenter had recently inherited a farm that he didn't need. Monet rented it in 1883 and moved in with his future wife, Alice -- Camille had passed away in 1879 -- along with his two children and her six.

By the time Monet died in 1926, the 86-year-old painter had spent almost half his life in Giverny. 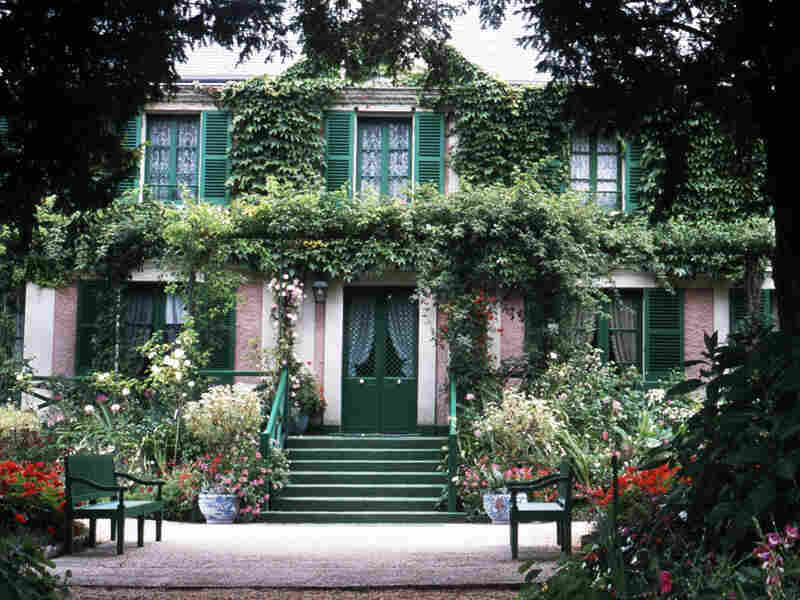 Claude Monet bought his house in Giverny seven years after he first started renting it. He worked hard to create the gardens, later featured in his paintings, around his home. Fondation Claude Monet hide caption 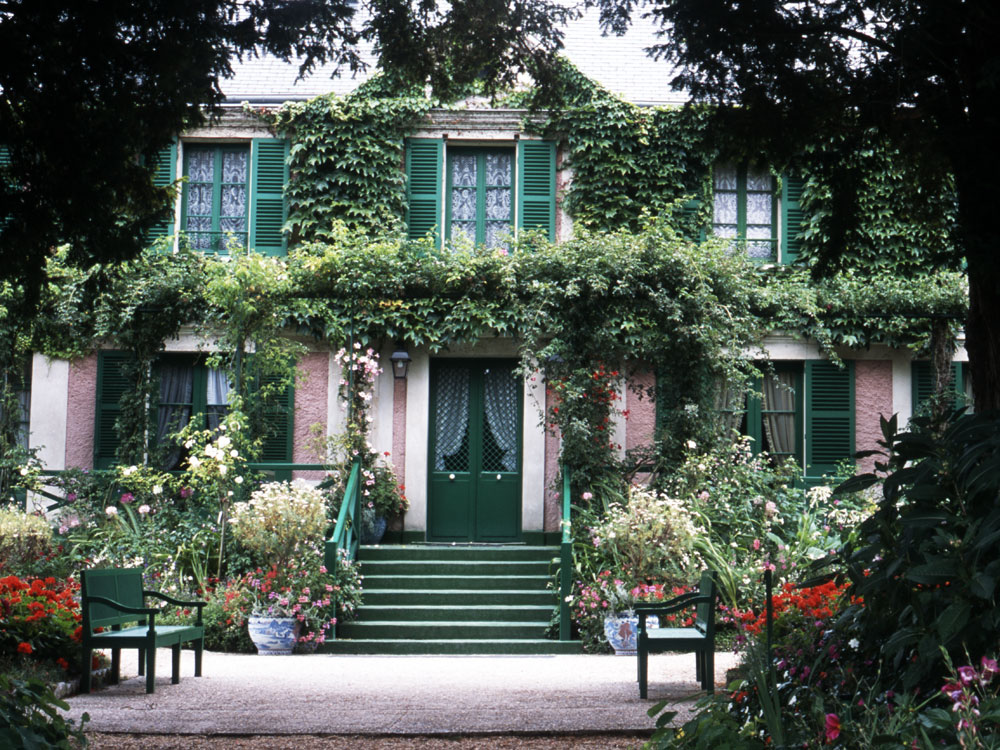 Claude Monet bought his house in Giverny seven years after he first started renting it. He worked hard to create the gardens, later featured in his paintings, around his home.

'All The Color And The Life'

Alice was pretty authoritarian by most accounts, but that didn't stop Monet from enjoying life's simple pleasures.

"He loves eating; he likes women; he loves smoking," says Lauren Eshobar of the Monet Foundation.

Monet was a big, hearty, disciplined Norman who loved his life in Giverny as much as he loved his work there. And when you see his house, you understand why. Its ivy-covered pink facade and bright green windows make for a striking combination. It was in that house -- which the painter bought in 1890 after his work started selling in America -- and in its carefully designed gardens that Monet devotedly and deliberately created works of art that today's visitors to Giverny can actually walk through.

With the help of his family and six gardeners, Monet planted, nurtured and composed his garden -- a world of flowers made up of yellow, pink and red roses arrayed on the ground and draping over metal arches; patches of bright red geraniums; pale purple lavender; deep purple pansies; irises; impatiens; peonies and more.

"It's almost like he's flicked his paintbrush and it just landed on the green," says visitor Nigel Whittaker of Birmingham, England. "It just looks like one of his paintings, and brings out all the color and the life."

The splendor of Monet's garden is available outside and inside the house.

"It's amazing; you can almost imagine Monet here in his garden," says visitor Sara Whitham of London. "His spirit is here." 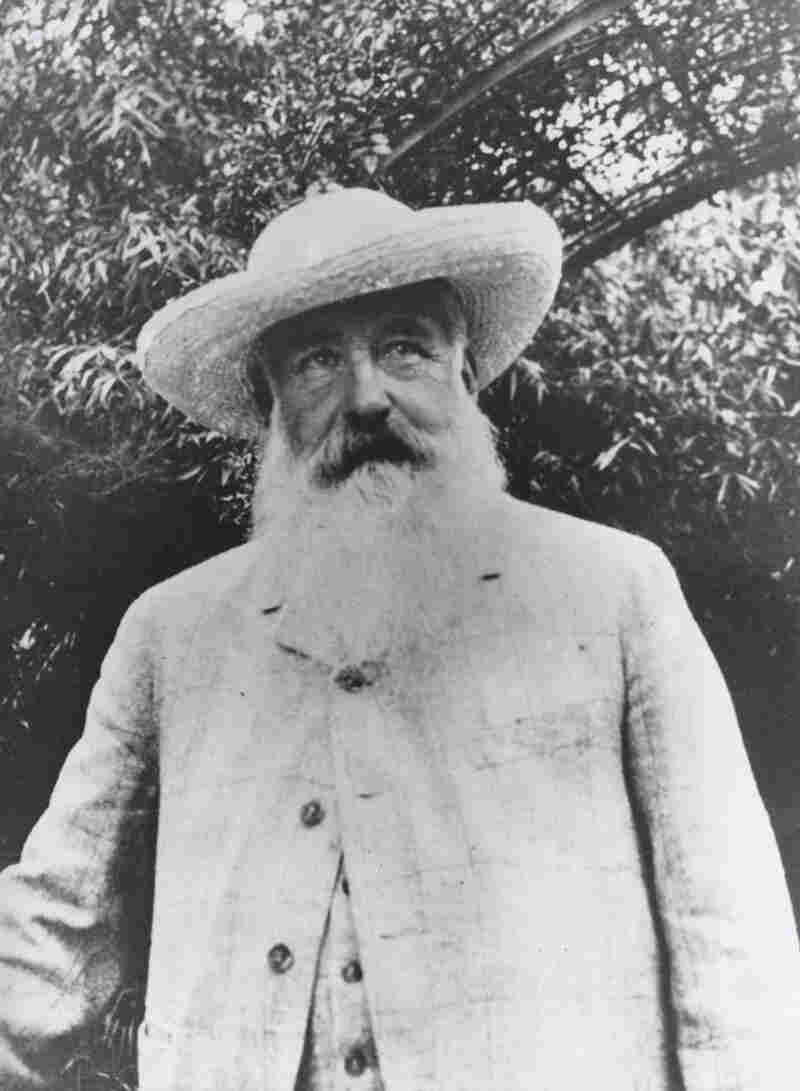 Monet loved his life at Giverny, and the town attracted tourists and other artists alike -- but Monet never allowed visitors to interrupt while he was painting. Sacha Guitry/Courtesy of Fondation Claude Monet hide caption

The Pond Of Monet's Inspiration

Before Giverny, Monet had painted what others had created: the cathedral at Rouen, haystacks and steam locomotives. But at Giverny, Monet made the subjects of his paintings. By placing the flower beds just so and shaping the paths in pleasing curves, Monet built his canvases first in flowers, then in paint.

He bought some adjacent land and put in a pond with small green footbridges, clumps of bamboo along the edges and willows that bend toward their watery reflections. He added lily pads -- floating circles of green, with spiky white and pink blossoms that open up when the water reaches 64 degrees Fahrenheit.

Monet loved the pond's reflections and the way light seemed to shift the space when moving over it. In his final years, he became obsessed with his patterned, abstract paintings of the lilies.

But according to Mueller, the pond of Monet's inspiration wasn't particularly easy to maintain.

"Monet had one gardener who was in charge of the pond, and his task was to fish out all the dry leaves and prevent the water rats from eating the waterlily bulbs," she says.

Monet himself took daring steps to realize his masterpieces.

"He needed water to have his pond," Mueller says, "so without any official permission, he brought one arm of the river through his garden."

The town tried to fine him when he tapped the Epte River, but his friend George Clemenceau -- a powerful journalist, politician and future French prime minister -- stepped in, and Monet got to have his pond.

Two centuries later, the canvases Monet created of his gardens are found in some of the world's major art museums, as well as in the new Museum of Impressionism in Giverny. Even today, they serve as reminders of the sweetness of the French countryside -- or "Douce France" in the words of the old Charles Trenet song -- painted so lovingly by Claude Monet.