Accessibility links
Innocence Rewarded: Bellini's 'La Sonnambula' A young woman's habit of sleepwalking leads to troublesome consequences. But Bellini's light-handed approach is the perfect complement to the inspired purity of his melodic style. 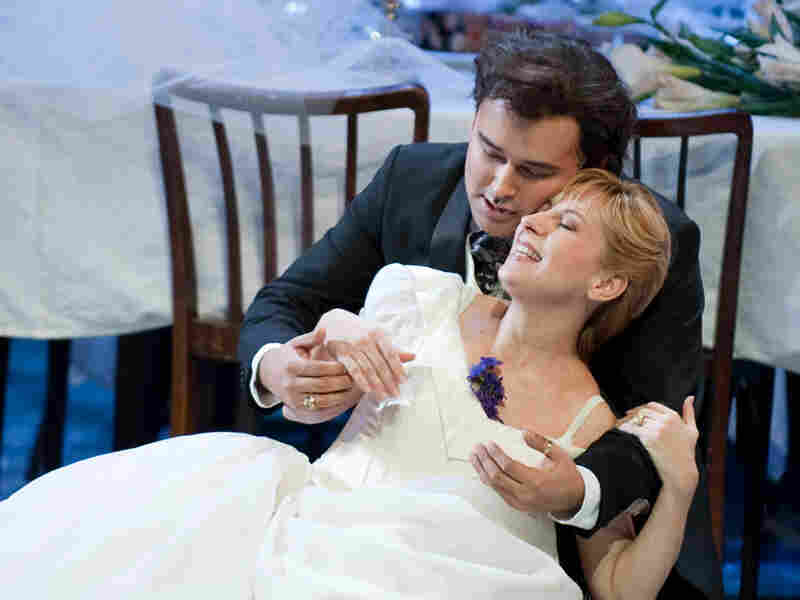 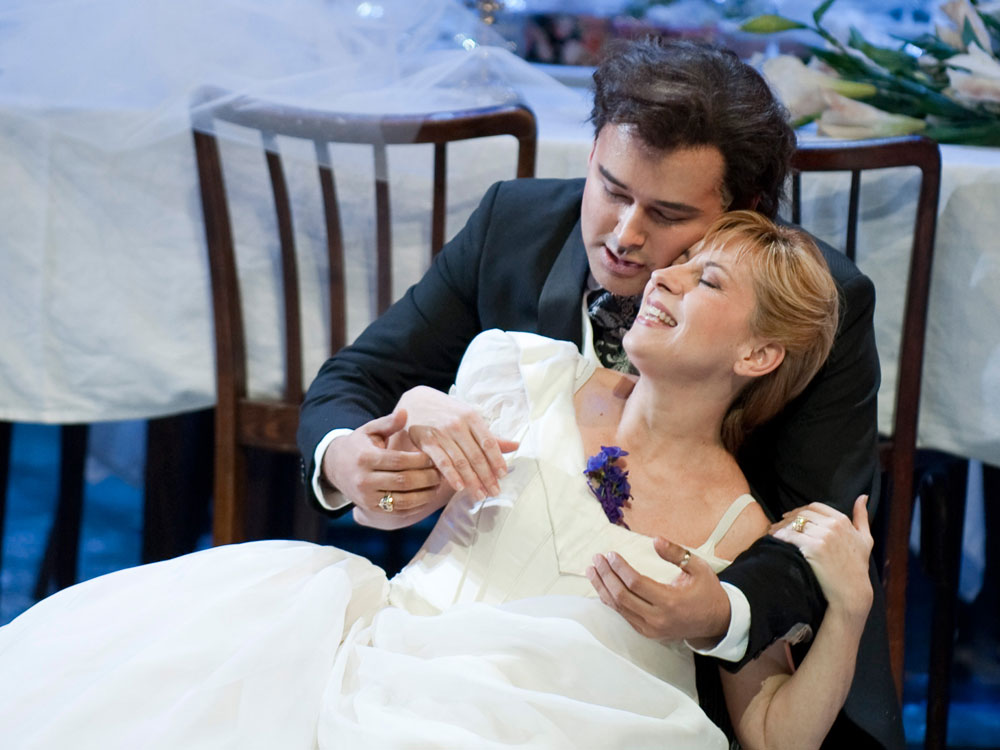 Vincenzo Bellini was only 33 years old when he died in 1835, and he had already become an operatic superstar. Still, judging from his operas, he doesn't seem to have been a happy-go-lucky kind of guy -- at least when it came to choosing his subject matter.

Until La Sonnambula, and after it as well, all of Bellini's mature works were designated as serious operas. They all featured betrayal, backstabbing, heartbreak and graphic death: throat-slitting, poison, immolation -- you name it.

In this emotional, last act aria, a sleepwalking Amina (soprano Natalie Dessay) sings about the wildflowers Elvino gave her as a pledge of his love, and can't believe they're already dying. Her sincerity convinces everyone, including Elvino, that she's innocent after all.

Elvino (tenor Javier Camarena) first gives Amina the flowers, along with a ring that had belonged to his mother, in this gentle, Act One love duet.

Bellini's first big hit was The Pirate, with a story of tragic love, blackmail, and murder. His next one was The Stranger, where a despondent lover stabs himself to death -- in the middle of his own wedding! Then there's Norma, Bellini's best known opera. Here, the title character is burned alive after falling for the wrong guy.

So when the lead character in Bellini's La Sonnambula is discovered in the wrong man's bed, it makes sense that she's probably headed for a similar, sad end. But, not this time. La Sonnambula is all about innocence. And even when that innocence seems false, it turns out to be a simple mistake -- understandably made, and easily corrected.

When Bellini wrote La Sonnambula, he was trying to get around some persnickety censors -- a sort of Italian "ratings council" -- who had just nixed his latest project. He'd been working on a setting of Ernani, a bloody, Victor Hugo story about death and betrayal.

So, when that one got canned just a couple of months before opening night, Bellini turned to a tale so innocuous that even its bad behavior is really nothing of the sort. Why was the young lady dozing in the wrong man's room? She'd been sleepwalking -- it could happen to anybody! In the hands of another composer, the whole thing might seem silly and simpleminded. But the innocence of its sentiment is the perfect complement to the inspired purity of Bellini's melodic style.

On World of Opera, Lisa Simeone presents La Sonnambula in a production starring soprano Natalie Dessay as Amina, the sleepwalker, from the Bastille Opera in Paris.

The Story of 'La Sonnambula' 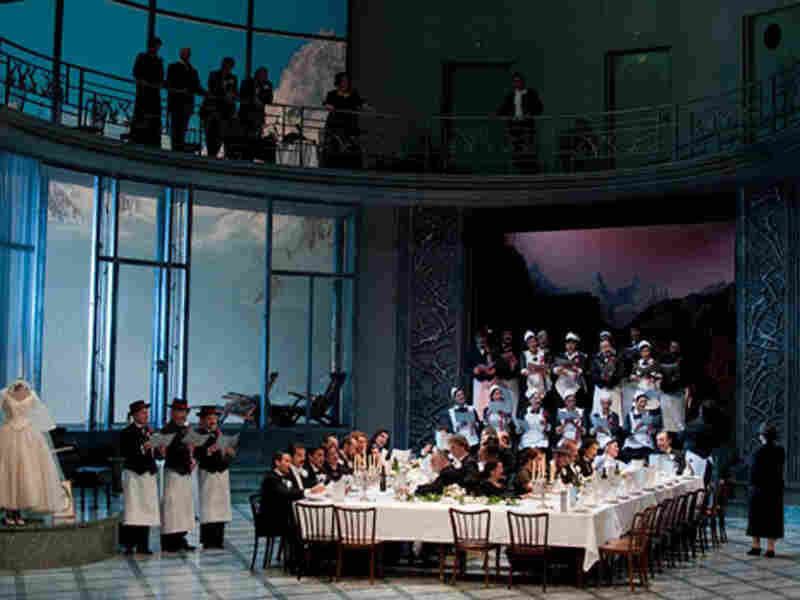 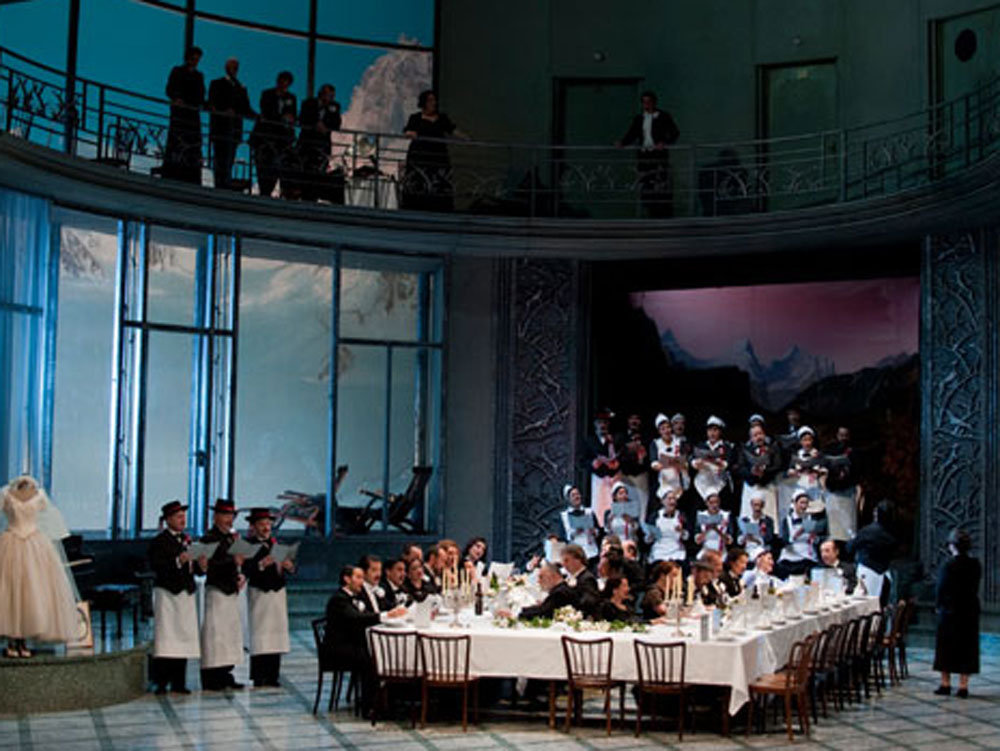 The opera takes place in a Swiss village early in the 19th century. ACT ONE opens in the village square where there's an inn, and the local mill, nestled in the background. A chorus of villagers is joyous, but the young woman Lisa, who owns the inn, is down in the dumps. Her former lover, Elvino, a successful farmer, is about to be engaged to someone else -- namely Amina, an orphan, brought up by Teresa, who runs the mill.

A man called Alessio rushes in and hugs an unenthusiastic Lisa. He's in love with her, but she pays him little attention. As the villagers arrive to celebrate Amina's engagement, she comes out of the mill with Teresa, and thanks them. Amina naively wishes Alessio and Lisa well, and Teresa notices Lisa's unfriendly reaction.

A notary enters, announcing the arrival of the groom, Elvino. With the notary as a witness, Elvino pledges everything he has to Amina, and she replies that all she has to offer in return is her heart. In their duet, Elvino gives Amina a ring that belonged to his mother, and a bouquet of wildflowers. They are now officially engaged.

The sound of coach wheels is heard, and a stranger enters; he's on his way to a nearby castle, but doesn't know exactly where it is. Lisa says he'll never make it by nightfall, and invites him to stay over at her inn. The villagers don't recognize him, but he remembers the mill and the countryside. He says that when he was young, he briefly lived in the castle he's looking for, and wonders what became of the count who owned it. The others tell him the count died long ago, and his heirs are missing. This stranger, Rodolfo, is quickly smitten by Amina, who reminds him of a youthful love.

It's now dusk and Teresa urges everyone to leave. She warns Rodolfo about a phantom, in white clothes, that haunts the area at night. Rodolfo is skeptical, but the villagers back up her story, describing the ghost to Rodolfo. He says a fervent good night to Amina, much to Elvino's indignation. Left alone, Elvino and Amina quarrel, and then make up, in a florid duet.

In the next scene, at the inn, Rodolfo is flirting with Lisa, who tells him that the local mayor has recognized him as the old count's legal heir, and thus the new lord of the castle. They're startled by a noise, and as Lisa hurriedly leaves, she drops her kerchief. Amina, dressed in white, comes in through the window; she's walking in her sleep, and Rodolfo realizes that she must be the "phantom" the villagers have been seeing.

In disjointed phrases Amina talks about her forthcoming marriage, Elvino's jealousy, and their quarrel. Rodolfo refrains from taking advantage of "this pure and innocent flower," and exits through the window, leaving Amina asleep in his room.

When the villagers arrive to welcome Rodolfo as castle's new lord, they're amused when they discover a girl in Rodolfo's bed. They're about to leave discreetly when Lisa walks in with Elvino and Teresa. Lisa triumphantly points to the sleeping girl, and everyone is shocked when they recognize Amina.

The commotion wakes Amina. She's confused, and says -- honestly -- that she has no idea how she wound up in Rodolfo's room. But the villagers denounce her, saying she's lying. Teresa, the only one who believes her, picks up the kerchief Lisa dropped earlier, mistaking it for Amina's, and puts it round Amina's neck. As the act ends, Elvino is convinced that Amina has betrayed him, and angrily calls off their wedding.

ACT TWO opens in a valley between the village and the local castle. The villagers are headed for the castle to put Amina's case to Count Rodolfo, while Amina seeks consolation from Teresa.

Meanwhile, Elvino is miserable, and treats Amina with anger. The villagers return, announcing that the Count has exonerated Amina. But that's not good enough for Elvino, who furiously snatches his ring from Amina, refusing to take her back.

In the next scene, in the village square, Lisa again brushes off Alessio's advances. With Amina in disgrace, she's now free to marry Elvino, who seems agreeable. He kisses her hand and leads her towards the church, while Rodolfo, arriving with the villagers, proclaims Amina's innocence.

In a quartet, the Count tries to explain to Elvino that Amina never betrayed him -- she really was sleep-walking. Meanwhile, Teresa is shocked to see that Elvino is about to marry Lisa, who helpfully points out that she was not the one who turned up in another man's room. But there's proof that she had been in Rodolfo's room! She left in a hurry when Amina turned up, dropping her kerchief in the process. And when Teresa produces that kerchief, Elvino realizes that Lisa has been lying.

Then, as everyone is in an uproar, a white figure appears on the roof of the mill. It's Amina, sleepwalking again. To the relief of the crowd, she descends without falling.

Still asleep, Amina begins to sing about Elvino and her grief over losing him. The beauty of her sentiment convinces everyone, including Elvino, that she is innocent after all. Elvino returns the engagement ring to Amina's finger, and she's gently awakened. She and Elvino are both overjoyed, and as the opera ends, the villagers hurry them off to the church to be married.