Accessibility links
Jobless Benefits End, Senate Exits, History Repeats And it's likely to happen again as Republicans and Democrats battle over the best way to balance helping the unemployed vs. adding to the fast-growing national debt. 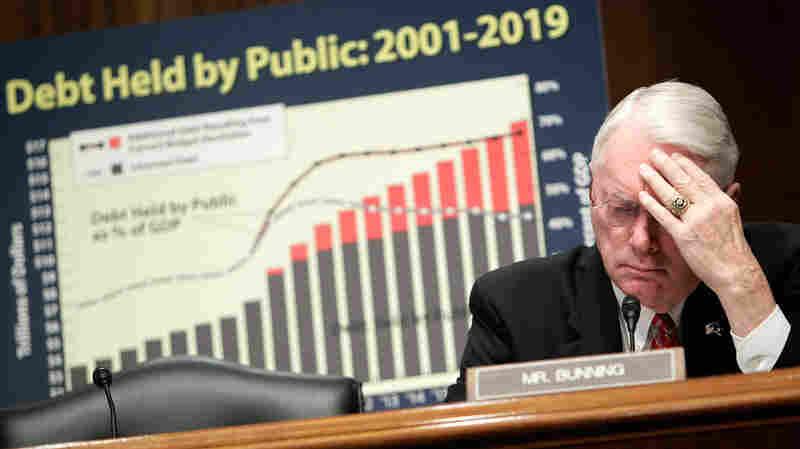 Kentucky Sen. Jim Bunning was one of the first Republicans to argue that jobless benefits can't be extended without finding a way to keep from adding to the national debt. Alex Wong/Getty Images hide caption 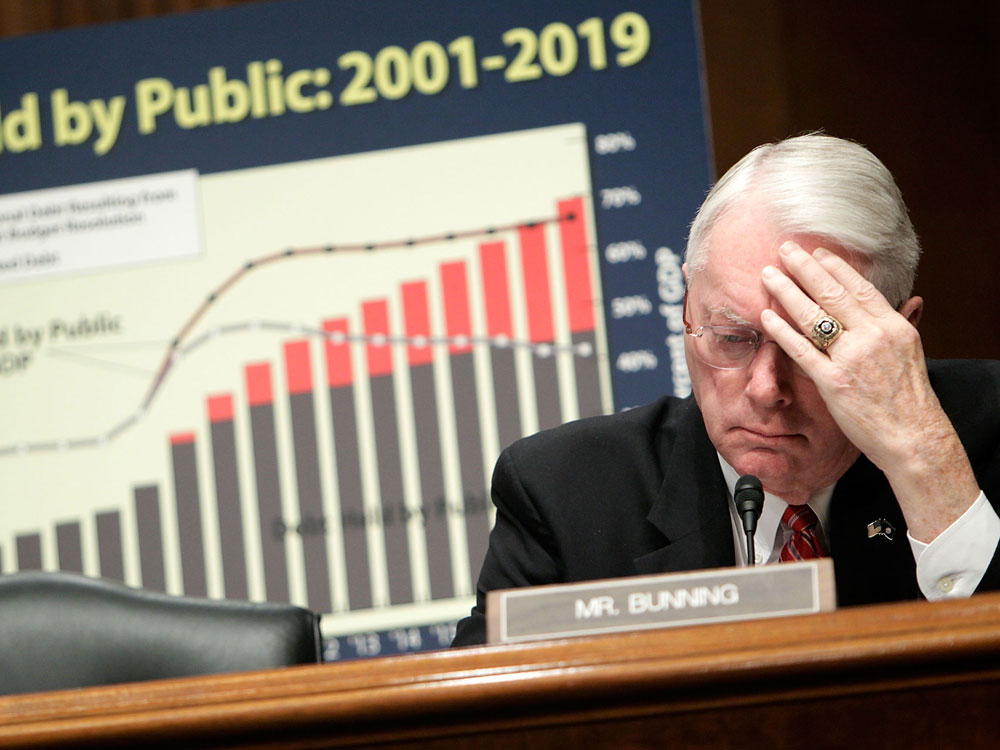 Kentucky Sen. Jim Bunning was one of the first Republicans to argue that jobless benefits can't be extended without finding a way to keep from adding to the national debt.

What is usually a "gimme" in congressional politics has turned into a hard sell. People who have seen their unemployment benefits expire will have to wait a while longer before seeing another check.

Unemployment benefits generally last 26 weeks, but they are inevitably extended during recessions. With the jobless rate hovering around 10 percent -- the Bureau of Labor Statistics said Friday morning that it stood at 9.5% in June, vs. 9.7% in May, and that total nonfarm payroll employment declined by 125,000 jobs last month -- Congress has already extended the benefits several times over the past two years, offering assistance for up to 99 weeks.

But such additional coverage expired June 4 and the Senate has since failed to renew it. The House approved an extension Thursday, but it appears the Senate will not pass its version until after the July 4 recess.

The likely result is that more than 2 million people will have lost their unemployment benefits by the end of next week.

Despite the delays, there's no real question that the unemployment benefits will eventually be extended, with benefits offered retroactively to those who have stopped receiving checks. But Congress will almost surely have to go through this same exercise come November, after the next extension expires.

Any permanent change in how unemployment coverage gets extended is beyond Congress' current ambitions. For now, the debate turns on the question of whether the next short-term extension will be paid for, or add additional billions to the federal deficit. Both parties will be making their cases during the weeks leading up to November's midterm elections.

The argument that any extra unemployment insurance should be paid for is one that Republicans have been making for months. In February, Sen. Jim Bunning (R-KY) single-handedly delayed an extension of unemployment benefits for several days.

It was both the necessity of offering more help and the bipartisan appeal of doing so that led Bunning to take such a stand, he said. "If the Senate cannot find $10 billion to pay for a measure we all support, we will never pay for anything," Bunning wrote in a USA Today editorial. 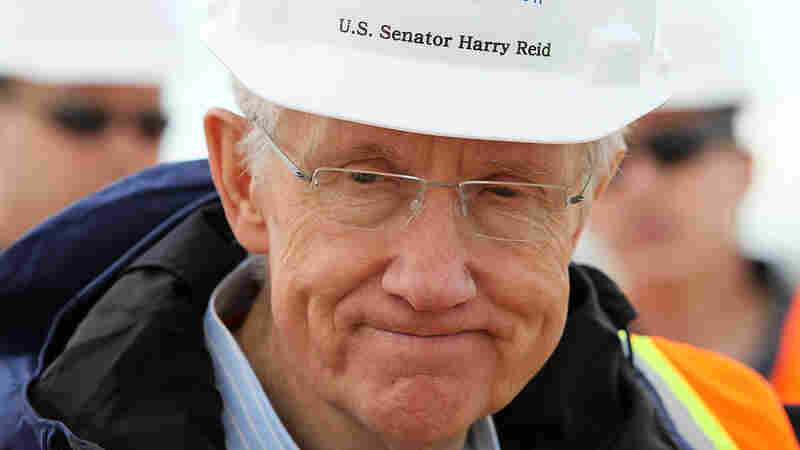 Senate Majority Leader Harry Reid of Nevada, and most of his fellow Democrats, have argued that deficit reduction efforts have to wait. Justin Sullivan/Getty Images hide caption 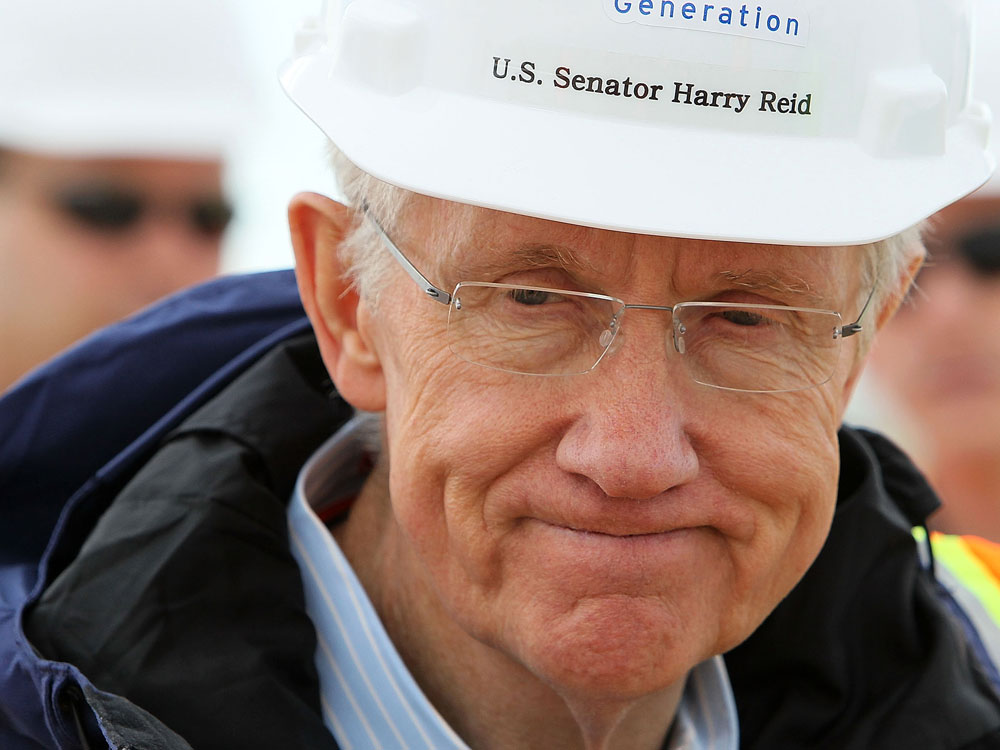 Senate Majority Leader Harry Reid of Nevada, and most of his fellow Democrats, have argued that deficit reduction efforts have to wait.

Estimating the price tag for the current extension at $34 billion, Republicans say it's even more important that the cost be offset through spending cuts -- or by dipping into unspent funds from the 2009 stimulus package.

"Americans are not receiving their unemployment checks because Democrats refuse to pay for these benefits at a time of record federal deficits," Michigan Rep. Dave Camp, the top Republican on the House Ways and Means Committee, said during floor debate Thursday.

Already, the unemployment extension has been decoupled from other big spending programs that President Obama and congressional Democrats favored, including aid to states and localities for Medicaid expenses and teachers' salaries -- all of which would have added to the federal deficit.

"Any time Congress moves to cut something back, you have an interest group that screams, 'cut anywhere but our program,' " says James Sherk, senior policy analyst in labor economics at the conservative Heritage Foundation. "The easiest thing to do is add to the deficit. That's what the majority [party] wants to do."

Democrats argue that given the shaky economy, putting money into the pockets of the unemployed is more important than worrying about the deficit. They frequently cite work by Mark Zandi, chief economist for Moody's Analytics, that suggests each dollar in unemployment insurance generates $1.60 in additional economic activity.

"Republicans want tax cuts for the wealthy, yet they insist that an emergency extension of unemployment be paid for," says Jim Manley, spokesman for Senate Majority Leader Harry Reid (D-NV).

Manley suggests that additional unemployment insurance benefits not only help those out of work, but also benefit the economy as a whole. "If you're going to run deficits, this is exactly how we should be doing it," says Heather Boushey, senior economist with the Center for American Progress, a progressive think tank.

There will clearly be political pressure to extend the benefits. Because job creation has been so anemic, about half the people who are now unemployed have been out of work for six months or more. Nearly a quarter have been looking for at least a year.

"There are more people right now collecting the extended benefits than the regular benefits," says Wayne Vroman, an economist with the center-left Urban Institute.

Boushey argues that Congress should change the rules to avoid these type of situations, moving to a formula that would automatically extend unemployment coverage in each state until its unemployment rate returned to pre-recession levels.

But Congress has avoided making that type of structural change to the unemployment insurance system for years. A system of automatic triggers was set up during the 1970s, but the type of measures that were used quickly became obsolete, owing to broader changes in the economy as it shifted away from its traditional industrial base.

For their part, states prefer the current ad hoc system, because they're only on the hook financially for the first 26 weeks of jobless benefits. For any extension beyond that, the federal government picks up the tab.

That means members of Congress must take on the job of extending coverage -- sometimes repeatedly -- during each recession. The latest extension is likely to pass in the end, but Senate Democrats must wait until they can round up an additional vote.

They expect to attain the 60th vote they need once West Virginia Gov. Joe Manchin, a Democrat, names a replacement for Sen. Robert C. Byrd, who died Monday. That is likely to happen the week of July 12.

"I expect Congress is going to extend these benefits," says Sherk, the Heritage economist. "Both parties are going to say it's a priority. The question is, are they going to offset it, or not?"