Accessibility links
Attack On USAID Compound In Afghanistan Kills 4 A suicide bomber used an explosives-laden SUV to blow a hole through the gate of the Kunduz province compound used by a Washington, D.C.-based global consulting company. Five other attackers ran inside but were killed in a shoot-out with NATO and Afghan security forces. 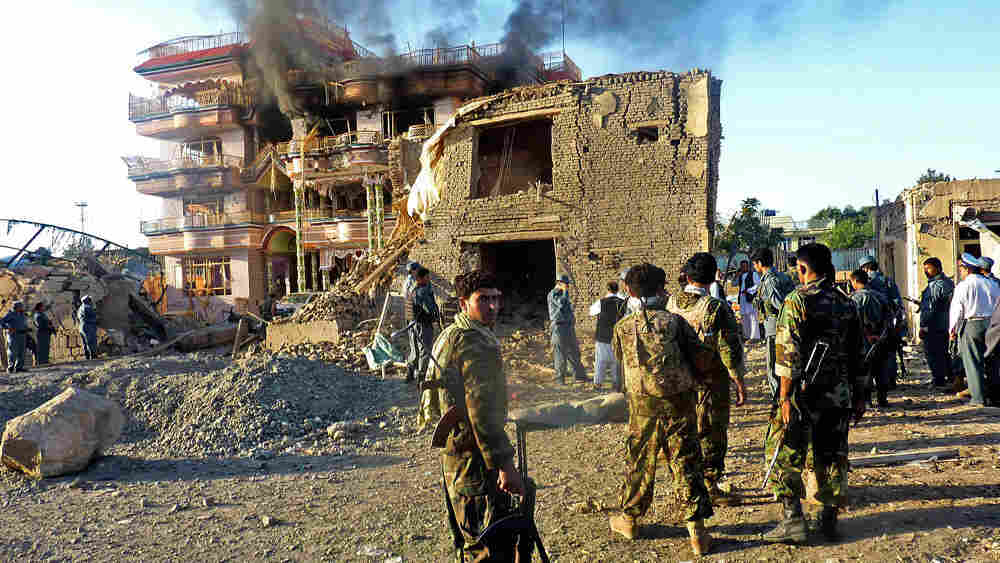 Afghan security forces stand outside a USAID compound in northern Kunduz province on Friday after it was stormed by militants. AP hide caption 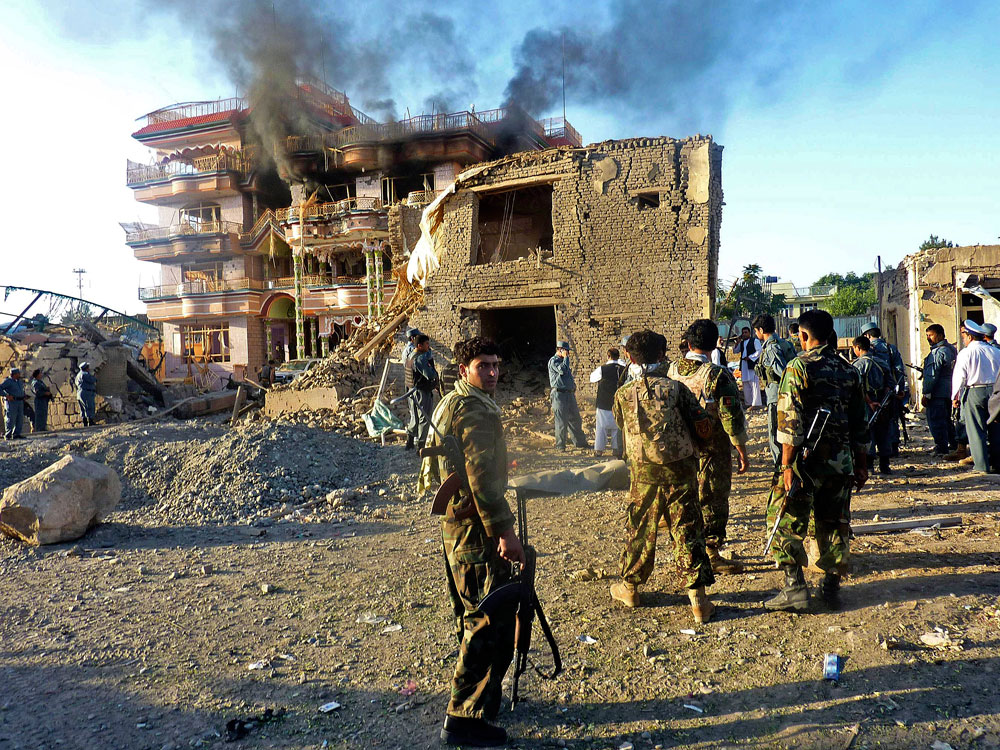 Afghan security forces stand outside a USAID compound in northern Kunduz province on Friday after it was stormed by militants.

The Taliban claimed responsibility for the assault on a compound in Kunduz province used by Development Alternatives, a Washington, D.C.-based contractor working for the U.S. Agency for International Development.

Several hours before dawn, a suicide bomber detonated an explosives-laden SUV outside the compound gate. Local police said five other fighters wearing suicide vests then stormed inside. NATO and Afghan security forces surrounded the compound and killed the attackers in a six-hour gunbattle.

Black smoke poured from the windows of the four-story building. The bodies of the victims were found inside amid rubble, pools of blood and broken glass. Stunned aid workers were led from the scene as NATO troops carried bodies wrapped in black plastic out on stretchers.

Gen. Abdul Razaq Yaqoubi, police chief in Kunduz province, said those killed included an Afghan policeman, an Afghan man who worked as a security guard and at least two aid workers, one from Germany and one from the Philippines. The district governor reported that a third foreign aid worker died, but that could not be confirmed.

"It was 3 o'clock in the morning, close to the morning prayer time, when a suicide bomber in a 4x4 vehicle exploded his vehicle," Yaqoubi said as Afghan national security forces were battling to kill the last surviving attacker. "There is no way for him to escape."

The attack appeared part of a Taliban campaign against development projects at a time when the U.S. and its allies are trying to bolster civilian programs to shore up the Afghan government. On Wednesday, militants rocketed a base for South Korean construction workers in Parwan province but caused no casualties.

In April, a gunman killed an 18-year-old woman working for Development Alternatives as she left her job in the southern city of Kandahar. Police believed the killing was part of a Taliban campaign against Afghans working for foreign development organizations.

"This attack shows the insurgents' desire to prevent progress, and draws attention to their true goal of serving themselves rather than the people of Afghanistan," said Navy Capt. Jane Campbell, a spokesman for NATO, referring to the Kunduz attack.

Coalition troops provided assistance to Afghan security forces and helped wounded civilians at a nearby NATO base, she said.

Violence is rising in Afghanistan, and concern is growing in Washington and other allied capitals over the direction of the war. The 120,000-member NATO-led force is awaiting the arrival of a new commander, Gen. David Petraeus, who has warned of hard fighting this summer.

The United Nations is relocating a few dozen of its 300 foreign-hired staff because of fears about rising violence.

NPR's Quil Lawrence and Corey Flintoff, reporting from Kabul, contributed to this story.