Accessibility links
Private Sector Gains But Economy Sheds 125,000 Jobs The national unemployment rate fell to 9.5 percent in June, its lowest level in almost a year. Private employers added a modest number of jobs, but a wave of census layoffs caused monthly payrolls to drop for the first time in six months.

The Labor Department released a mixed employment report for June on Friday, with an increase in private-sector jobs but a net loss of 125,000 jobs last month, the most since October.

The national unemployment rate dropped to 9.5 percent -- its lowest level since July 2009. That's because 652,000 people gave up on their job searches and left the labor force. People who are no longer looking for work aren't counted as unemployed.

The overall loss of jobs was driven by the end of 225,000 temporary census jobs. And while private-sector businesses added 83,000 workers, many employees were working fewer hours for lower pay.

"I'd call this a mediocre report," Brian Wesbury, chief economist at First Trust in Chicago, told NPR. "It suggests some worries and concerns by the nation's employers."

Although businesses added fewer jobs than expected, he said it's still good news that private-sector payrolls have increased in seven of the past eight months, including the past six in a row.

"It suggests the economy is expanding,'' Wesbury said. 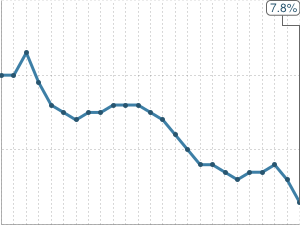 Obama, speaking at Andrews Air Force Base before flying to West Virginia for a memorial service for Sen. Robert Byrd, also announced the latest stimulus spending project: a nationwide effort to expand broadband access in places with little or no reliable Internet service. The president said it would create 5,000 construction jobs in the short term and ultimately benefit "tens of millions" of people.

"To every American who is looking for work, I promise you, we're going to keep on doing everything that we can," Obama said. "I will do everything in my power to help our economy create jobs and opportunities for all people."

But University of Maryland economist Peter Morici said the drastic decrease in the number of people looking for work is a sign that the economy is not improving.

"This is a terrible jobs report," Morici said, adding that the Obama administration's policies are not helping to revive the economy. "Unless the president changes his polices, this country is at grave peril."

Obama's chief economic adviser, Christina Romer, said in a statement that "these continued signs of healing are important, particularly given the recent volatility in world markets and the mixed behavior of other recent economic indicators. However, much stronger job gains are needed to repair the damage caused by the financial crisis and put the millions of unemployed Americans back to work."

Wall Street's response was tempered. Stocks were up modestly in early trading.

The Labor report indicates that businesses are still slow to hire amid a weak economic recovery. The nation has 7.9 million fewer private payroll jobs than it did when the recession began. It takes about 100,000 new jobs a month to keep up with population growth, and the economy needs to create jobs at twice that pace, at least, to quickly bring down the jobless rate.

All told, 14.6 million people were looking for work in June.

Counting those who have given up their job searches and those who are working part time but would prefer full-time work, the so-called underemployment rate edged down to 16.5 percent from 16.6 percent in May.

The Census Bureau added more than 400,000 workers in May to assist with the 2010 employment count, but most of those jobs lasted only six to eight weeks.