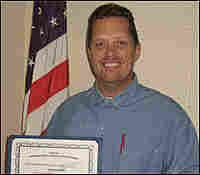 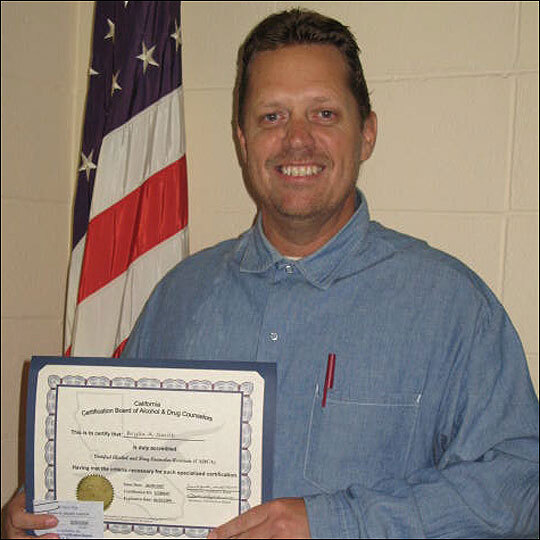 San Quentin inmate Brian Smith holds his certificate from the California Association of Alcoholism and Drug Abuse Counselors. He was recently granted parole.

Behind the stone walls and razor wire that surround California's San Quentin State Prison, a group of prisoners is sitting quietly in the prison's sanctuary for group drug counseling.

But the man leading the discussion, Brian Smith, isn't a psychologist or certified specialist in substance abuse. Smith is a fellow prisoner who has served 24 years of a life sentence. He's also part of an innovative peer-counseling program at San Quentin that's turning prisoners into certified drug and alcohol counselors.

Two years ago, Smith and a half dozen other inmates began looking for a drug treatment program that went beyond the prison's offerings.

"At one point in my incarceration, I realized that addiction is just one part of the problem," says inmate Don Kronk. "It's just the symptom — the actual outward appearance of what's going on inside — and I realized there's a lot more to this and just an AA group ... wasn't going deep enough."

They eventually found the Association of Alcoholism and Drug Abuse Counselors, or Caadac, which requires seven academic courses, 4,000 hours of supervised counseling and hundreds of dollars in credential fees. Outside addiction specialists at local universities and drug and alcohol treatment centers offered to teach the courses, and with the support of San Quentin Warden Robert Ayers, the prisoners knuckled down for the rigorous training.

Nina Ferraris, a program manager at the John Muir Behavioral Health Center for Recovery in Concord, Calif., who taught some of the courses, says the inmates' personal histories – which include serious drug- and alcohol-related crimes – made them uniquely qualified to counsel other prisoners.

"They're going to listen a lot more to a prisoner than me," Ferraris says. "I've never been to jail — at least not on that side of it — and what do I know? But they know."

Earlier this summer, the men completed the program and took Caadac's three-hour written exam. Nine of 11 men passed the test, including Smith, who was also granted parole earlier this month. He plans to use his certification to get a job and help others stay out of places like San Quentin.

"It's hard to wake up in a cage every day unless you do have a dream," Smith says.