Accessibility links
A Flag Isn't Just A Flag In Soccer-Crazed Germany Germany's soccer team meets Argentina Saturday in a much-anticipated World Cup quarterfinal match, and fans are fired up. But fervent flag-waving and other displays of nationalism are not sitting well with everyone in a country where extreme "patriotism" is part of a painful past. 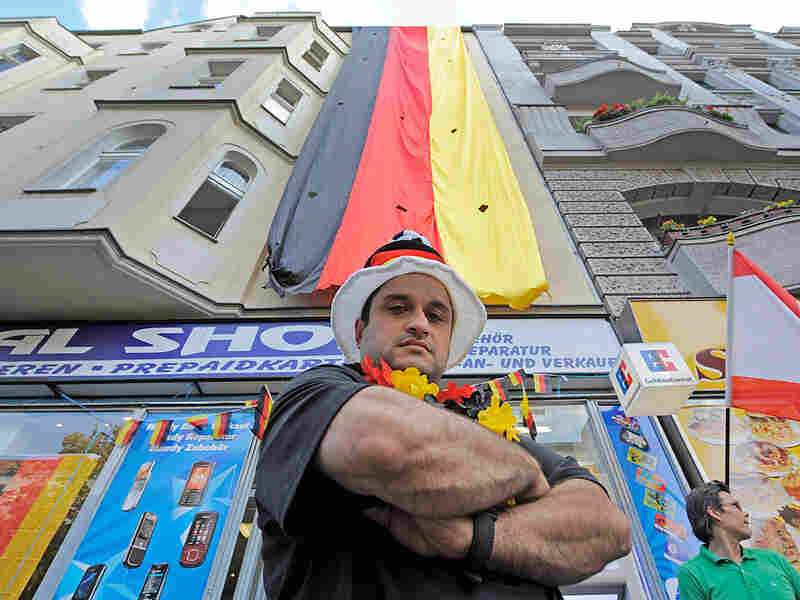 Beirut-born Ibrahim Bassal poses Tuesday near the four-story-deep German flag he has hung above his electronics shop in Berlin to show support for the German national soccer team, which plays in the World Cup quarterfinals Saturday. Displays of nationalism such as flag-waving and anthem-singing have renewed debate in Germany over the country's history of extreme patriotism. Jens Meyer/AP hide caption 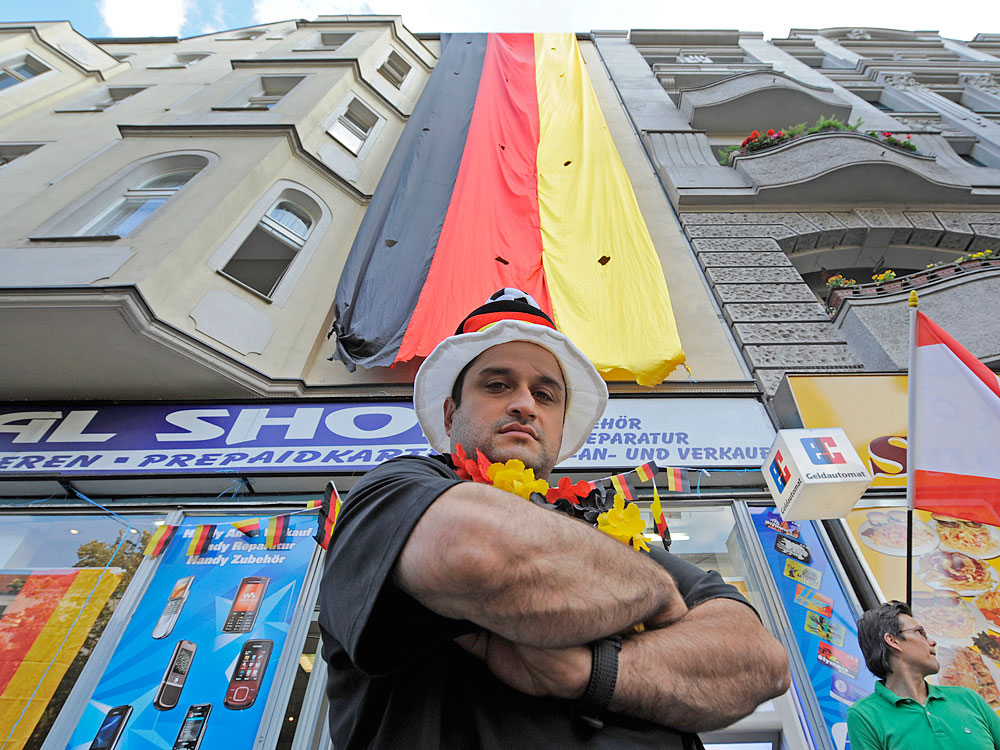 Beirut-born Ibrahim Bassal poses Tuesday near the four-story-deep German flag he has hung above his electronics shop in Berlin to show support for the German national soccer team, which plays in the World Cup quarterfinals Saturday. Displays of nationalism such as flag-waving and anthem-singing have renewed debate in Germany over the country's history of extreme patriotism.

The German soccer team meets Argentina Saturday in a much-anticipated World Cup quarterfinal match. Across Germany, fans are fired up. They're singing "Deutschland," beating drums and waving flags from cars and buildings and just about anything else.

But fervent flag-waving patriotism and displays of nationalism -- even for sports -- are not sitting well with all Germans.

The flags are everywhere, so Lebanese-born Ibrahim Bassal is annoyed and a little perplexed why masked young men keep coming in the middle of the night to try to tear and burn his absurdly large German flag -- nearly 70 feet long and 20 feet wide. Bassal proudly hangs the black, red and gold symbol of his adopted country down the side of the building above his small mobile phone resale and parts shop in a gritty section of East Berlin. He says the flag is in honor of the World Cup and is meant to show solidarity.

"We want to show that we are integrating ourselves, that we've already integrated," he says. "We belong here. When the team plays well, we are happy and all party together. We are German citizens. We participate."

Flag Thieves From The Left?

But Bassal is already on his third flag this World Cup -- at a cost, he says, of nearly $2,000. It's not anti-immigrant far-rightists who've attacked his property. He suspects it's local leftist protesters who have told him the big flag is simply too nationalistic and "reminds us of the past."

The latest attack came at 4 a.m., he says, when 10 masked kids climbed onto the roof and ripped and tried to burn the banner. The Beirut-born shopkeeper says he's fed up and is now posting family sentries to protect the flag.

Such is the flag angst in Germany this World Cup. Some bars in Berlin and elsewhere are offering "flag-free public viewing" of all soccer matches. One garden bar is offering "all the games, all the goals, none of the national anthems." They offer a big willkommen for all "who love the game but don't want to be forced to watch it surrounded by patriotism, nationalism, chauvinism and colonialism, and who don't want to feel forced to support Germany."

Achim Trautvetter helped create an alternative outdoor World Cup watching zone near an old industrial site in Potsdam just outside Berlin. He and the other organizers -- including a local soccer club -- are gearing up for a big crowd Saturday. There are a humongous viewing screen, a canopy against the sun, lots of seating and plenty of beer and bratwurst for sale in a friendly, flag-free surrounding.

"Here is our flag parking space," says Trautvetter. "We say to the people, 'OK, we don't want flags, maybe you take your flag and put it there.' "

Co-organizer Max Dalichow says, "We all know about the German trauma and extreme nationalism." He helped put together this different kind of viewing space, he says, because soccer fandom in Germany and across Europe can too often devolve into racism and idiocy.

He says a few fans stormed away angry, feeling like the group is confusing patriotism with blind nationalism and accusing everyone who waves the German flag of being a neo-Nazi.

But Dalichow and Trautvetter hope their flag-free experiment helps spark some debate about nationalism, patriotism and citizenship in today's Germany.

They've also made one nonpolitical move that most Germans would agree with: They've banned vuvuzelas because, well, the horns are annoying.