Accessibility links
Can You Be Fat And Fit? More Health Experts Say Yes Increasingly, research shows that being fit may trump being fat -- or at least moderately overweight. In one study, physically active but overweight women were less likely to suffer heart problems than their normal weight counterparts who didn't exercise. 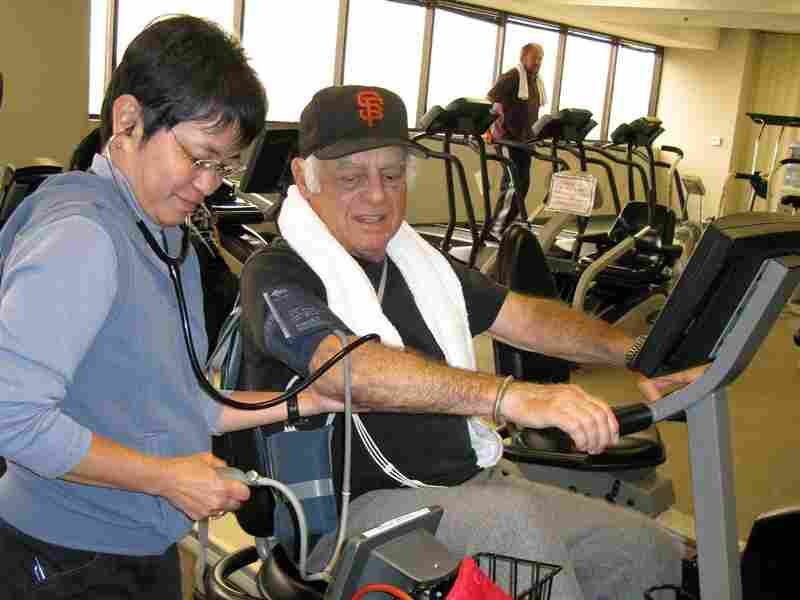 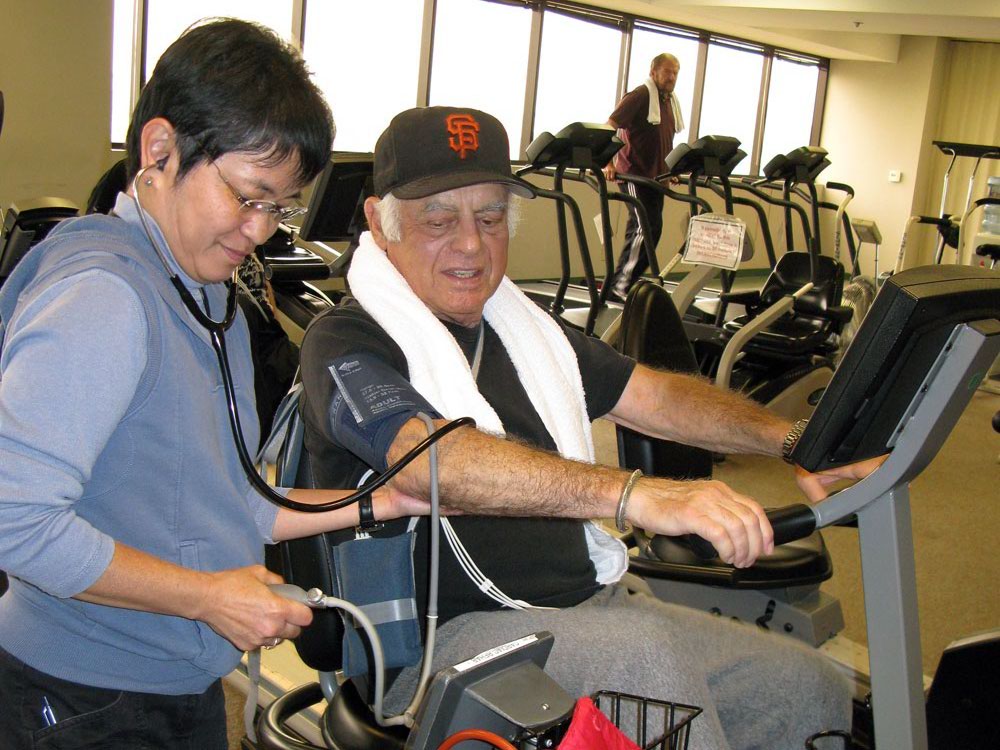 Health experts now think it's altogether possible to be overweight -- but still fit.

They say measuring only an individual's BMI, which is a measurement of body fat based on height and weight, can be misleading. Muscle weighs more than fat, for one thing. Extremely muscular individuals could actually have BMIs that classify them as overweight or even obese. Increasingly, health experts say a better measure of overall health includes not only BMI but a test of "fitness," too.

Cardiologist C. Noel Bairey-Merz is one of those experts. She's the director of the Women's Heart Center as well as the Preventive and Rehabilitative Cardiac Center at Cedars-Sinai Heart Institute. As a result of her research, she says "fitness" now trumps "fatness." She says those who are fit are people who could walk 30 to 60 minutes without having to stop; who could climb two flights of stairs without becoming winded; or who could do some mild to moderate aerobic activity -- a brisk walk or short jog, for example.

Such routine exercise strengthens heart and lung function, bones and muscles, as well as how the body processes oxygen. The greater the efficiency of these functions, the greater one's fitness.

Fitness can be measured with a simple questionnaire that asks patients about their level of physical activity. If a physician is particularly concerned about fitness, he or she can administer a stress test, which usually requires the patient to walk briskly or jog on a treadmill for a certain period of time while blood pressure and oxygen levels are measured.

Thin Does Not Equal Fit

In one study, Bairey-Merz found that women who were routinely physically active and overweight were less likely to suffer heart problems than their normal weight counterparts who didn't exercise.

1. Don't put it off any longer. It's time to do everything you know you should be doing: exercising, eating a low-fat, high-fiber diet, losing weight – and whatever you do, don't smoke. Thousands of studies have told us this helps heart health.

2. Time yourself: For heart health, you need to do 30 minutes of physical activity a day. To lose weight, you'll need to work up to 60 minutes a day. Your activity could be as low-tech as walking to do your errands or as regimented as a daily exercise class. But remember, fewer than 20 percent of adults achieve 30 minutes of sustained activity every day, so watch the clock.

3. Focus on fitness level, not whether you are fat. If you're fit, being a few pounds overweight is more likely due to increased muscle and doesn't matter as much. Once you start exercising and becoming more fit, it becomes easier to make healthy food choices.

5. If you think you might be having a heart problem, call your doctor. If you notice symptoms that could indicate heart disease, such as high blood pressure that doesn't respond to medication or water retention in your legs, don't wait – get to your doctor's office stat.

5. See your dentist, too. Infection in the teeth, gums and mouth can contribute to and trigger heart disease.

And conversely, normal weight women who did not exercise, she says, increased their risk of cardiovascular disease.

"They don't have the cardiovascular reserve," she says. "They're fine sitting quietly, working on the computer, hopping on the Internet, watching DVDs. Everything's fine at rest."

But when they actually have to do something, or when they face an actual cardiovascular stresser -- like a car accident, heart attack or pneumonia -- then, Bairey-Merz says, they do not have a fitness level that is going to help them do well and survive.

They're going to be at more risk for premature death, disability and disease, she says, adding that there is some evidence that being overweight is protective when people get sick.

"Fat is our energy storage device. It's, in a way, a little bit like having something in the bank," she says.

When Pounds Come In Handy

A number of studies have found that overweight people demonstrate a lower death rate than their peers who are underweight, obese or, most surprisingly, normal weight.

According to Bairey-Merz, a few extra pounds may be beneficial.

"If you're suffering a critical illness in the ICU [intensive care unit], you're often on a ventilator. You can't eat, are fed water by vein, and stressful conditions like (a severe skin) burn, pneumonia or heart attack are consuming calories," she says.

But is an extra 10 pounds always OK as long as you're exercising? Health experts say not necessarily. 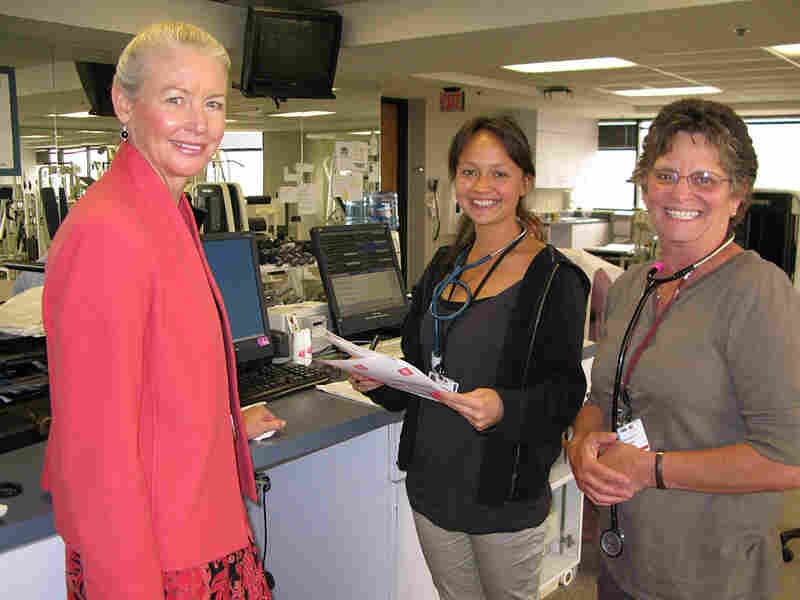 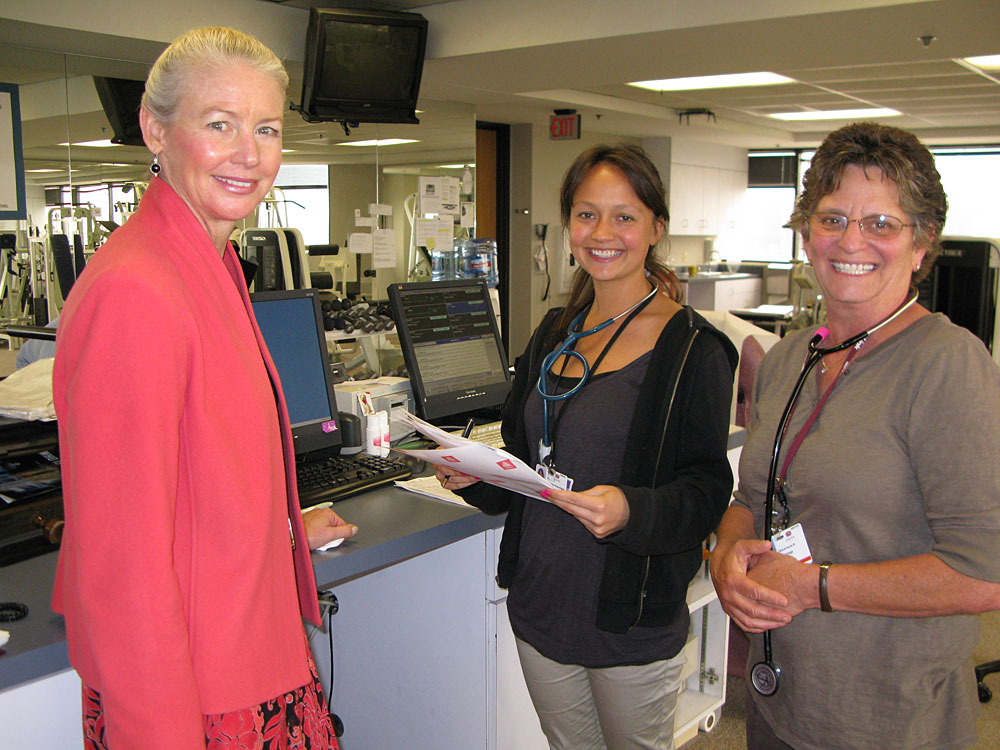 Abdominal fat is worse than fat elsewhere in the body. Geriatrician Arun S. Karlamangla is a professor and clinician at UCLA. In one study, he analyzed the health status of more than 4,000 men and women nationwide.

He found that men with a waist circumference larger than their hips experienced a 75 percent increase in death rate. For women, risk increased gradually with every inch of increased waist size.

Researchers don't know exactly why belly fat is particularly dangerous, but suggest it interferes with the body's ability to process sugar.

To keep abdominal fat down and to maintain or build fitness, the federal government recommends 30 minutes of moderate exercise every day. If you want to lose weight, exercise time increases to 60 minutes a day.

And health experts like Bairey-Merz suggest doctors pay as much attention to "fitness" as they do to "fatness."