Accessibility links
Trust, And Answers, Elusive In Post-Riot Kyrgyzstan Weeks after ethnic violence convulsed southern Kyrgyzstan, people are not as angry as they are confused. The Uzbek and Kyrgyz communities are avoiding each other, not out of hate but fear. The government vows a full inquiry. But so far, many painful questions remain unanswered. 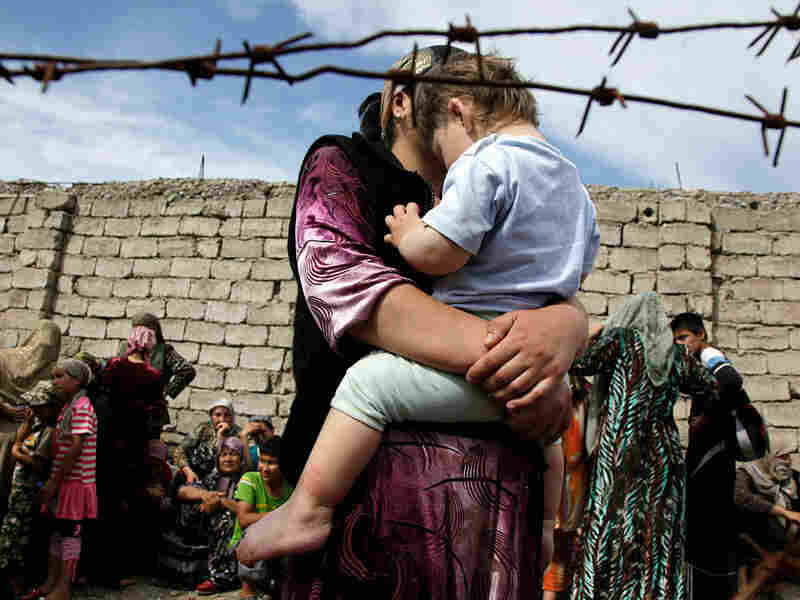 An ethnic Uzbek mother and son wait at the Kyrgyz-Uzbek border outside the village of Suratash, Kyrgyzstan, on June 14. Uzbek and Kyrgyz alike are trying to make sense of ethnic violence that took place last month. Oxana Onipko/AFP/Getty Images hide caption 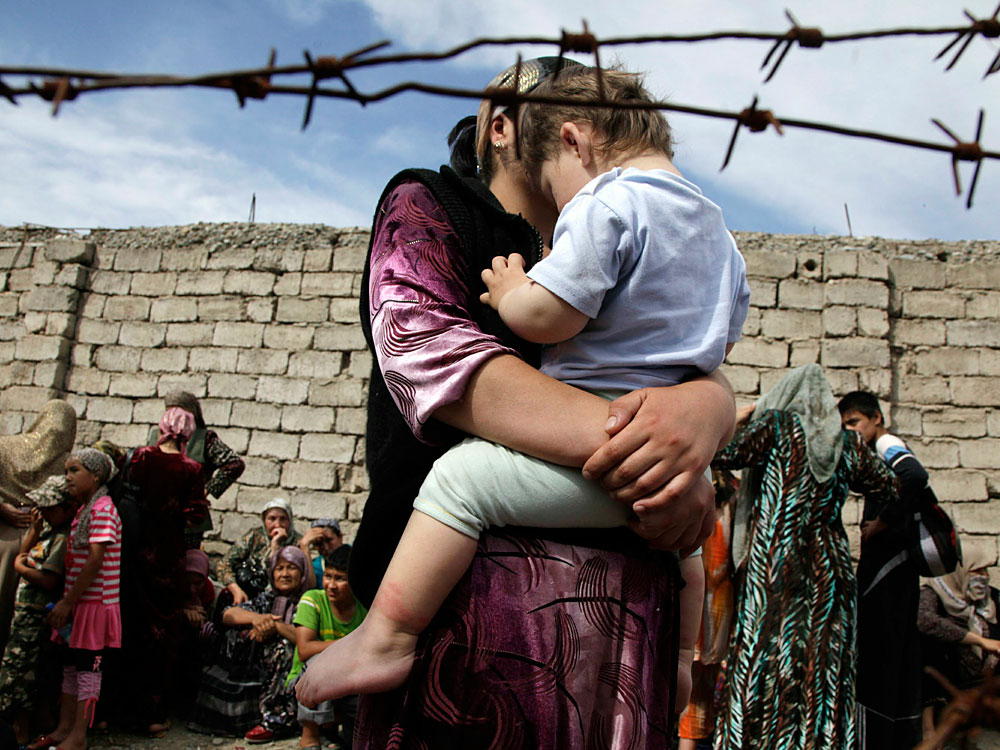 An ethnic Uzbek mother and son wait at the Kyrgyz-Uzbek border outside the village of Suratash, Kyrgyzstan, on June 14. Uzbek and Kyrgyz alike are trying to make sense of ethnic violence that took place last month.

Whenever I head for a new place, I hire a local journalist to work with me. And no one is better than Jyldyz Bekbayeva in Kyrgyzstan. She speaks the local languages and is devoted, willing to work any hour, go anywhere.

So I didn't understand why, when I asked Bekbayeva to take me to a village on the Uzbek border, she kept nervously saying no. Finally, she finally told me: Ethnically, she is Kyrgyz, and the village is Uzbek.

She called people there. They said an American journalist could come. But a Kyrgyz woman wasn't welcome. They couldn't promise she would be safe.

Bekbayeva is as unbiased a journalist as you can find. In peaceful times, she interviewed Uzbeks and produced documentaries on their communities. But in the ethnic conflict that swallowed southern Kyrgyzstan in June, what mattered was what she was in the eyes of others.

Bekbayeva drove me within two miles of the village, where a car was waiting. Two Uzbek men politely greeted Bekbayeva, then waved goodbye to her and drove me into the village, Suratash.

I expected to hear anger aimed at Kyrgyz people. After all, Kyrgyz mobs had burnt down Uzbek homes, sending people fleeing to Suratash. But I heard a different message, captured by 16-year-old refugee Nargiza Anveryeva. The Uzbek girl had been on the phone with her Kyrgyz friends.

"They called me, they asked me what happened," she says. They were concerned for her, and wanted to make sure it didn't happen to them, too.

Truth is, weeks after the ethnic riots, people are not as angry as they are confused. Two communities are avoiding each other, not out of hate. It's fear. If they don't know how the violence started, what suddenly inflamed select groups on both sides, it's hard to trust again.

They've been given so many theories about what took place. Maybe the former president wanted to shake the new government, so he hired mobs to spark ethnic clashes. Maybe Islamist militants were responsible. Maybe the government could have done more to control the bloodshed.

Last week, the Kyrgyz president's office called offering an interview. I quickly packed up in the south and rushed for the capital, Bishkek. The flights were sold out, but I paid for space in the rear of a small plane, where they stow extra luggage. And I thankfully made it to meet President Roza Otunbayeva. Yet, she had no answers either. Only promises that the government will do a full inquiry.

"Then we'll have a picture of what was not done, what was done and who was guilty," Otunbayeva said.

As a journalist covering a conflict, I'm supposed to offer more than stories of suffering. I'm supposed to get answers, and the truth. In Kyrgyzstan so far, that's been painfully impossible.