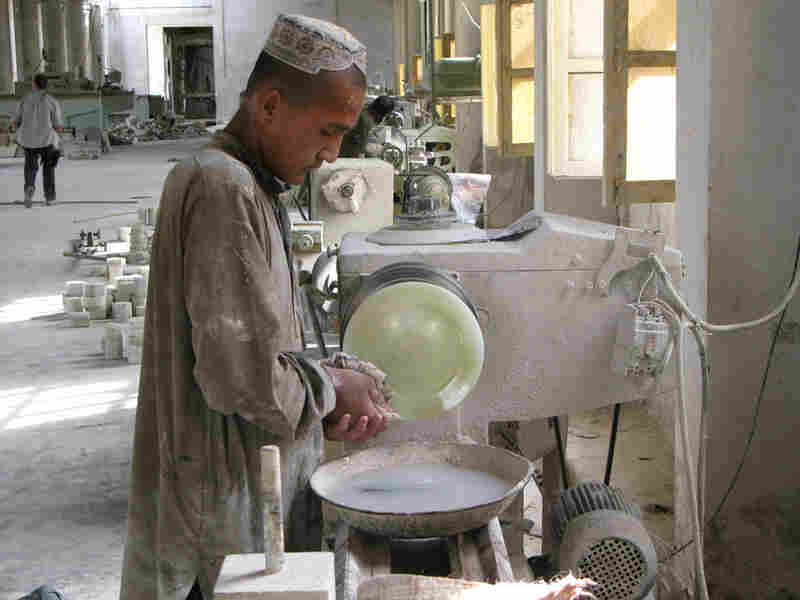 A worker shapes an onyx plate at an Afghan stone-cutting factory. The plant -- in a part of Helmand province once known as "Little America" -- tripled its workforce after American workers upgraded a nearby hydroelectric dam. Corey Flintoff/NPR hide caption 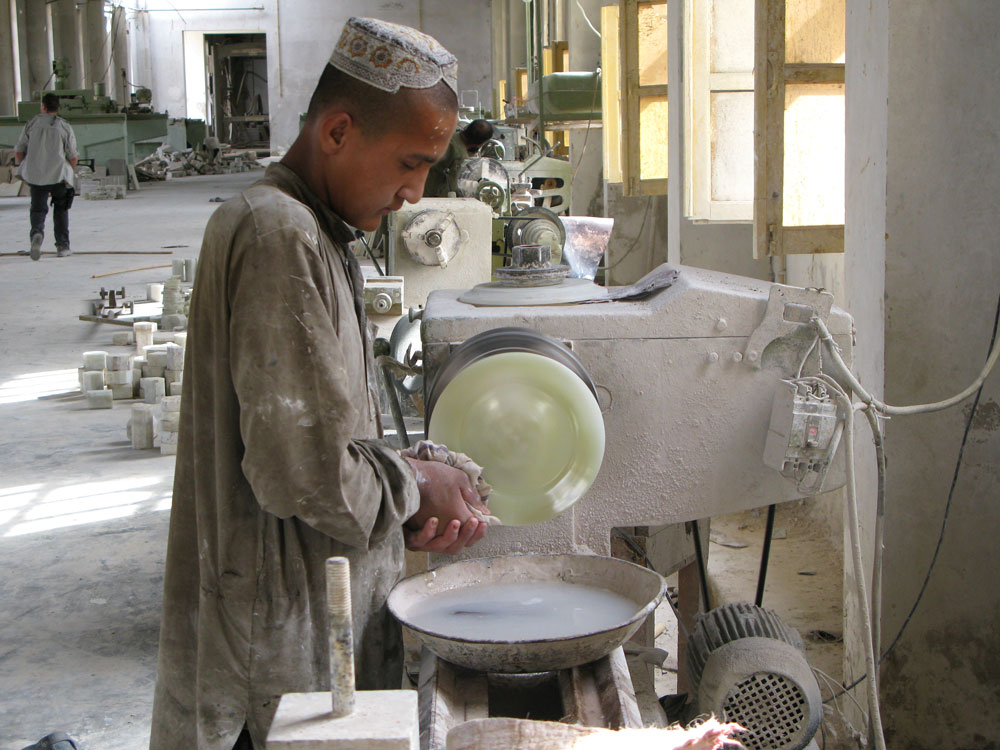 A worker shapes an onyx plate at an Afghan stone-cutting factory. The plant -- in a part of Helmand province once known as "Little America" -- tripled its workforce after American workers upgraded a nearby hydroelectric dam.

A lot of the attention in the war in Afghanistan is focused on the southern Helmand province, where NATO forces are still fighting Taliban militants more than four months after a major U.S.-led offensive.

The agricultural heartland is a potentially rich prize, in part because of American aid efforts in the 1960s and '70s -- an era when parts of the province were known as "Little America."

Today, U.S. and other foreign aid workers are trying to help revive the region and restore it to Afghan government control as part of the NATO counterinsurgency strategy.

Rory Donohoe, a USAID officer, gave a recent tour through Lashkar Gah, a town that was already ancient when the Mongol hordes arrived in the 13th century. What interests Donohoe is the more recent history of the capital of Helmand province.

"If you talk to the elders of Lashkar Gah, they will tell you very fondly about the days in the late '60s and early '70s, when a hundred American families lived in Lashkar Gah, when the governor had an American wife," says Donohoe. "The American experience in Helmand runs very deep across the community here."

The Americans helped build a hydroelectric dam and a system of irrigation canals that turned what had once been desert into rich agricultural land. The work was done in partnership with what was then the royal Afghan government, in support of a king the U.S. hoped would be a bulwark against communism.

Marlin Hardinger, a State Department foreign service officer in Lashkar Gah, says the program was so successful that it transformed Helmand from a region that was plagued by periodic famine to the breadbasket of Afghanistan.

The problem then -- as now -- was that the central government was weak.

"The government simply wasn't strong enough to survive certain economic and social upheavals, and then you had a foreign intervention, too, where the Soviets entered Afghanistan and the citizens suffered under 8 or 9 years of this foreign occupation," Hardinger says.

After the Soviet occupation came years of civil war and eventual Taliban control.

Then, instead of watering wheat, the canals of Little America served to irrigate poppy fields that supplied much of the world's opium and heroin.

It's only recently that NATO troops have been returning Helmand to government control, and civilian provincial reconstruction teams have started to rebuild and upgrade the infrastructure from the Little America years.

Fighting A War With Seeds, Not Bullets

Donohoe's tour of Lashkar Gah includes a stop at a power substation that distributes electricity from the hydroelectric dam. Nearly 50-year-old transformers stand side-by-side with new equipment that has doubled the station's capacity.

The electricity fires up stone-cutting machines at a factory that shapes a distinctive greenish form of local onyx into tiles and tabletops.

The factory chief says he's supplying stone products to buyers all over Afghanistan, enough to keep more than 70 workers operating in three shifts If security improves, he says he could create 400 more jobs.

There's no question that this modest boost in prosperity is good for Lashkar Gah, but does it really contribute to NATO's counterinsurgency efforts?

Scott Dempsey is a USAID officer who's been working on agriculture projects as part of the reconstruction team. He says economic support for people in Helmand ultimately keeps them from turning to the Taliban.

"If they're growing more, if they're producing more and selling for a higher price, there's less economic incentive for them to join the insurgency, so it's part of the strategy," says Dempsey. "So, it's a lot cheaper to fight a war with seed than it is with bullets"

All the Americans in this story say they believe that -- and believe that the work they're doing contributes to the success of the war effort.

Donohoe and Hardinger say they have each extended their tours in the area, serving more than three years in the war zone, because they want to see their projects through.

They say the key to success is to build the capacity of the Afghan government to carry out the projects and provide services on its own.

"In some cases the government is strong enough to deliver basic goods and services on a regular basis," says Hardinger, "and it's just getting it to the point where it can do it independently, and I think that's an ongoing process that will take time."

The question is whether the U.S. and allied governments, facing the costs of a long war and drained by a sharp recession, will be willing to continue the process that once made this place a Little America.