Accessibility links
A Reagan Legacy: Amnesty For Illegal Immigrants As the nation's attention turns back to the fractured debate over immigration, it might be helpful to remember that in 1986, Ronald Reagan signed a sweeping immigration reform bill into law. The bill made nearly 3 million illegal immigrants eligible for amnesty -- a word not usually associated with the father of modern conservatism. 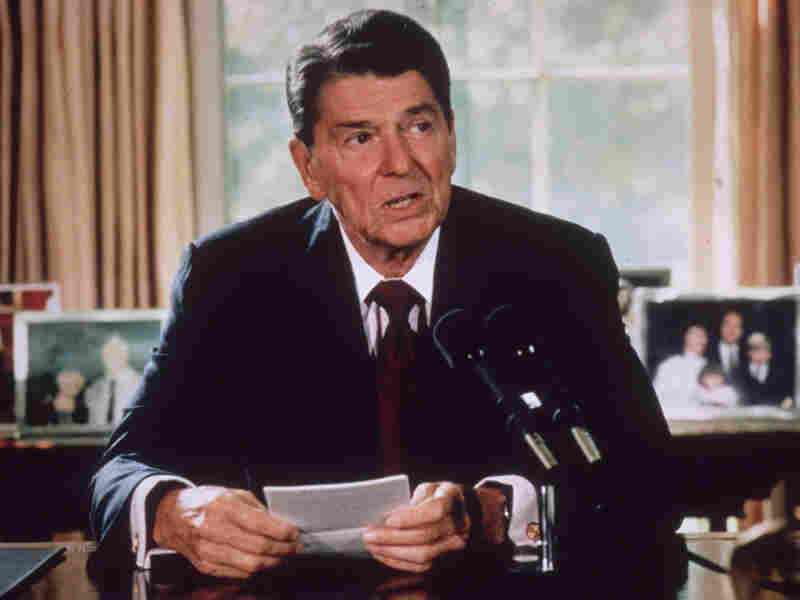 "I believe in the idea of amnesty for those who have put down roots and lived here, even though sometime back they may have entered illegally," Ronald Reagan said in 1984. Hulton Archive/Getty Images hide caption 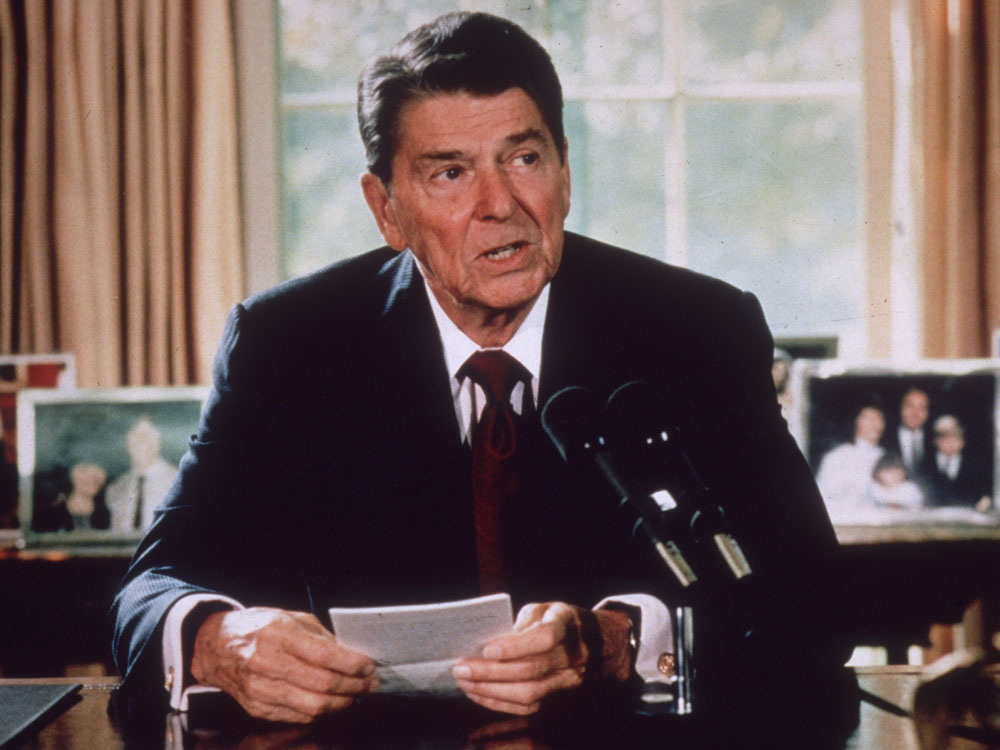 "I believe in the idea of amnesty for those who have put down roots and lived here, even though sometime back they may have entered illegally," Ronald Reagan said in 1984.

As the nation's attention turns back to the fractured debate over immigration, it might be helpful to remember that in 1986, Ronald Reagan signed a sweeping immigration reform bill into law. It was sold as a crackdown: There would be tighter security at the Mexican border, and employers would face strict penalties for hiring undocumented workers.

But the bill also made any immigrant who'd entered the country before 1982 eligible for amnesty -- a word not usually associated with the father of modern conservatism.

In his renewed push for an immigration overhaul this week, President Obama called for Republican support for a bill to address the growing population of illegal immigrants in the country. This time, however, Republicans know better than to tread near the politically toxic A-word.

Part of this aversion is due to what is widely seen as the failure of Reagan's 1986 Immigration Reform and Control Act. However, one of the lead authors of the bill says that unlike most immigration reform efforts of the past 20 years, amnesty wasn't the pitfall.

"We used the word 'legalization,' " former Wyoming Sen. Alan K. Simpson tells NPR's Guy Raz. "And everybody fell asleep lightly for a while, and we were able to do legalization."

The law granted amnesty to nearly 3 million illegal immigrants, yet was largely considered unsuccessful because the strict sanctions on employers were stripped out of the bill for passage.

Simpson says the amnesty provision actually saved the act from being a total loss. "It's not perfect, but 2.9 million people came forward. If you can bring one person out of an exploited relationship, that's good enough for me."

Nowadays, conservative commentators like Glenn Beck and Rush Limbaugh often invoke the former president as a champion of the conservative agenda. Sean Hannity of Fox News even has a regular segment called "What Would Reagan Do?"

Simpson, however, sees a different person in the president he called a "dear friend."

Reagan "knew that it was not right for people to be abused," Simpson says. "Anybody who's here illegally is going to be abused in some way, either financially [or] physically. They have no rights."

Peter Robinson, a former Reagan speechwriter, agrees. "It was in Ronald Reagan's bones -- it was part of his understanding of America -- that the country was fundamentally open to those who wanted to join us here."

Reagan said as much himself in a televised debate with Democratic presidential nominee Walter Mondale in 1984.

"I believe in the idea of amnesty for those who have put down roots and lived here, even though sometime back they may have entered illegally," he said.

Now, Amnesty Is Out; Border Security Is In

More than 20 years later, the Republican Party has changed its tune. President Obama's call for bipartisanship on the immigration issue was answered by Senate Republican Leader Mitch McConnell. A bipartisan effort would be possible, he said, if Obama "would take amnesty off the table and make a real commitment to border and interior security."

But Simpson, a fellow Republican who served in the Senate with McConnell from 1986 to 1997, says calling for tighter borders is a tried-and-true tactic of politicians unwilling to confront the realities of a growing illegal population.

"That's always the palliative that makes people feel good," he says. "You just say, 'Well, we're still dinkin' around with immigration, so since we can't seem to get anything done and our constituents are raising hell -- how do we get re-elected?' Well, you just put some more money into the border."

Robinson says Reagan's own diaries show the president found the idea of a militantly staffed border fence difficult to take. In a private meeting with then-President Jose Lopez Portillo of Mexico in 1979, Reagan wrote that he hoped to discuss how the United States and Mexico could make the border "something other than the location for a fence."

Fix It Before You Overhaul It

These days, Republicans are also calling for existing laws to be toughened up, which Reagan would have agreed with, Robinson says. In fact, Robinson says, he would have been so upset at the federal government's failure to make good on the 1986 reform that he would have demanded for that law to be fixed first before instituting a new overhaul.

"He, too, would have been right there in saying, 'Fix the borders first.' " Where he would have differed, Robinson says, is his welcoming attitude toward immigrants.

"He was a Californian," Robinson says. "You couldn't live in California ... without encountering over and over and over again good, hard-working, decent people -- clearly recent arrivals from Mexico."

That the U.S. failed to regain control of the border -- making the 1986 law's amnesty provision an incentive for others to come to America illegally -- would have infuriated Reagan, Robinson says.

"But I think he would have felt taking those 3 million people and making them Americans was a success."