Accessibility links
Weathering Emotional Storms Over Gulf Oil Spill The spill in the Gulf of Mexico has caused a lot of visible damage, and now signs of the mental toll have also started to show. Thousands are seeking counseling from professional clinics and neighbors alike. 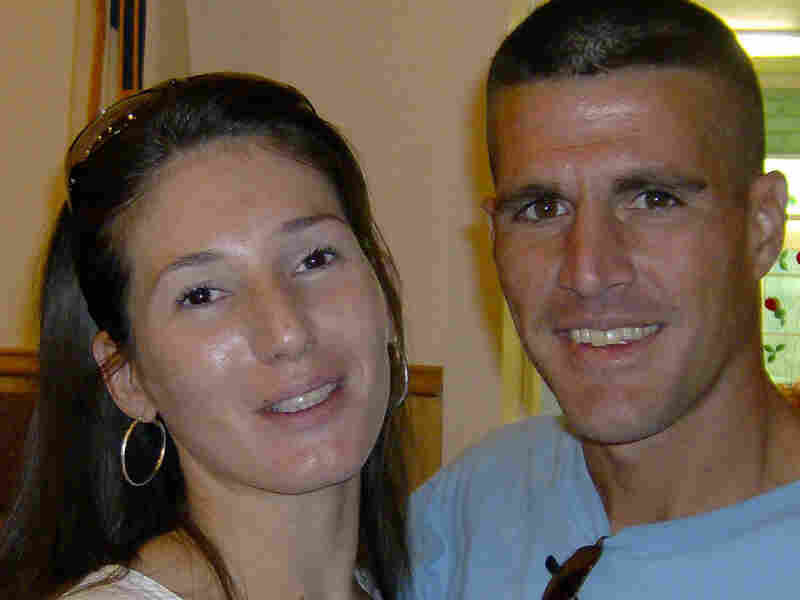 Garet Mones has been a commercial fisherman in Louisiana for most of his life. After the oil spill, Mones sought mental health support for a nervous breakdown. His fiance, Carmen Mackles (left), says Mones was almost suicidal. Julie Rose for NPR hide caption 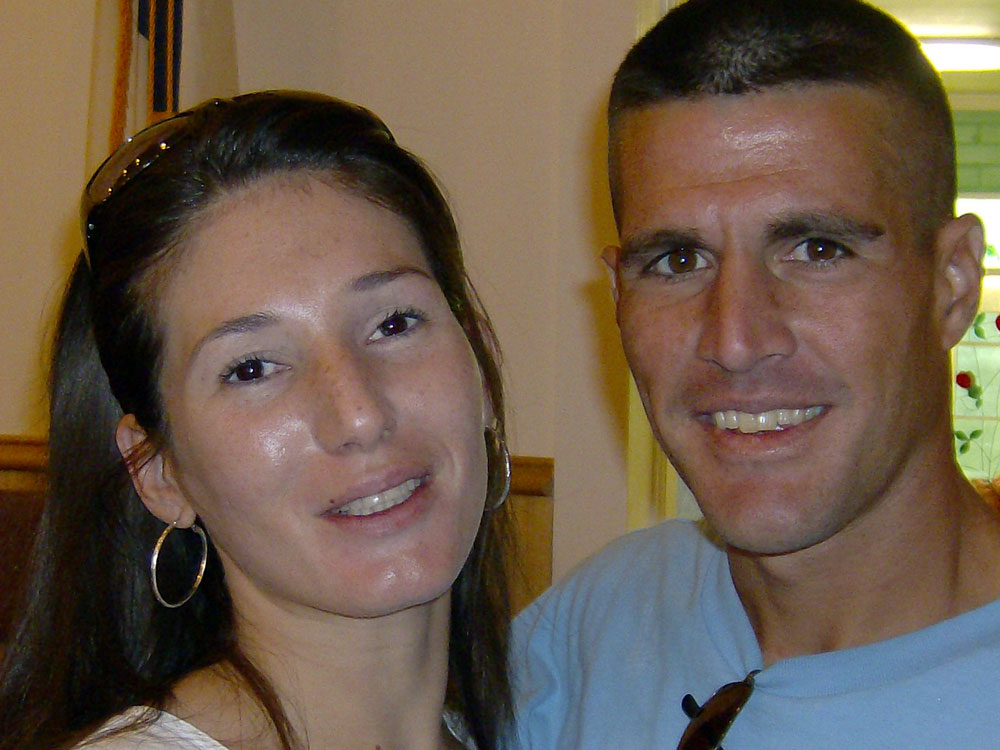 Garet Mones has been a commercial fisherman in Louisiana for most of his life. After the oil spill, Mones sought mental health support for a nervous breakdown. His fiance, Carmen Mackles (left), says Mones was almost suicidal.

Oily beaches and lost livelihoods are the visible effects of the massive well leaking into the Gulf Coast.

But consequences that are harder to spot are starting to get more attention now, like the need for mental health care. On June 23, an Alabama boat captain, whose friends say he was "despondent" over the oil spill, took his life. The surgeon general was in Alabama Wednesday and is in Florida Thursday, talking about mental health.

And if the reaction to this spill mirrors that of the Exxon Valdez case, follow-up litigation may bring more anguish than the initial disaster. State officials across the Gulf have started pushing BP to donate money for mental health outreach.

'That's All He's Ever Been'

Garet Mones is one of many Gulf residents who have sought mental health support as a result of the spill. On June 9 -- Day 51 of the oil spill -- Mones checked himself into the hospital. He was having a nervous breakdown.

"I feel like everything's been taken from me, you know? Not just my livelihood -- my life," he says.

Mones got his first boat when he was 8. He has been a commercial fisherman for nearly all of his 29 years in the small Louisiana bayou town of Hopedale. His buzzed haircut and chiseled features make him look pretty tough. But the oil spill has left Mones completely deflated. He spent a total of six days in the hospital.

More From NPR On Oil And Health

"In there it was like ... I'm watching it on the news, and I'm seeing it still and it's still there, but I just put my mind in there and just let everything out here just be whatever it is," Mones says.

Mones' fiancee, Carmen Mackles, says "he was really, like, suicidal."

"His dad was a fisherman. All his friends are fishermen, his uncles. You know, that's all he's ever been. He's never had any other job," Mackles says.

Now the stress -- of being out of work, of wondering if things will ever return to normal, of waiting for a check from BP to help pay the bills -- is wearing on Mones and thousands like him up and down the coast.

University of South Alabama sociologist Steven Picou documented significantly higher rates of anxiety and depression in Alaska fishing towns after the Exxon Valdez oil spill. He expects the same in the Gulf, because of what he calls a "corrosive social cycle."

"See, there's an all-clear that's signaled after a natural disaster, and you know when it has ended," Picou says.

That gives communities closure, and people tend to pull together in recovery. But with a man-made disaster like an oil spill, Picou says, the effects unfold over time, and it's more common to see communities tear apart. People get caught up blaming the company and fighting for a piece of the compensation pie. In Alaska, Picou says, the legal battle with Exxon became like a second disaster for the people.

"And by 2000, what we found was that the primary source of stress relating to the spill was being a litigant and not being a commercial fisherman," Picou says. 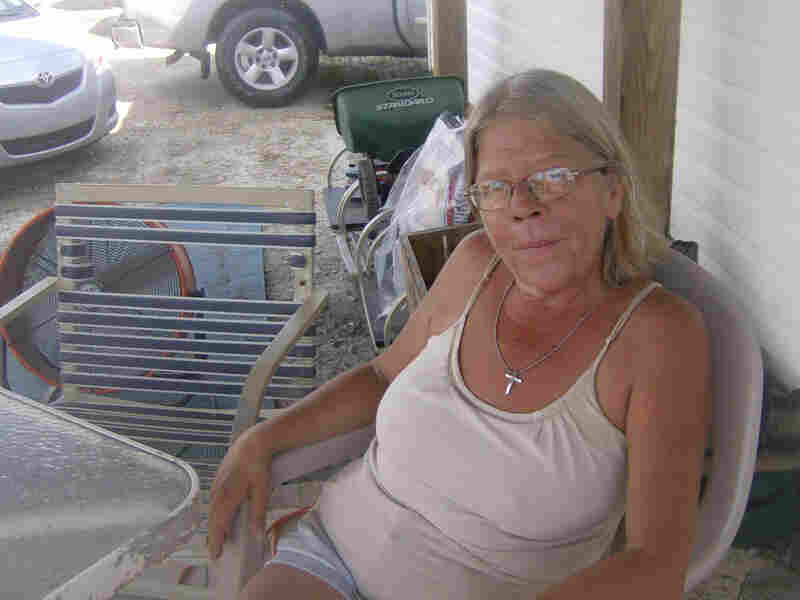 Diane "Momma D" Phillips sits next to a chair she says is usually occupied by distressed friends. Though not a professional counselor, Phillips lends an ear to Hopedale, La., residents who feel the effects of the oil spill. Julie Rose for NPR hide caption 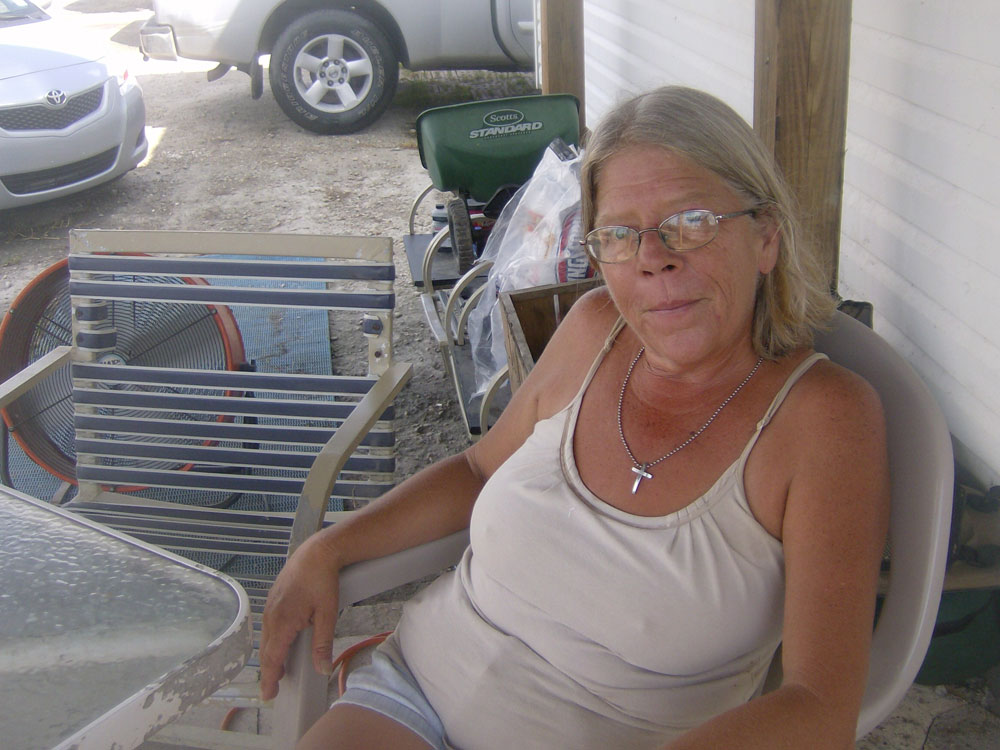 Diane "Momma D" Phillips sits next to a chair she says is usually occupied by distressed friends. Though not a professional counselor, Phillips lends an ear to Hopedale, La., residents who feel the effects of the oil spill.

To deal with stress, some people, like Mones, turn to church. He says the singing and praying make him feel hopeful. Others drink. More than 3,000 have sought out crisis counselors at centers set up by Catholic Charities Archdiocese of New Orleans. Gulf states have asked BP for millions of dollars to pay for mental health services. So far none of those requests has been granted, though BP is offering crisis counseling to locals working on the cleanup effort.

Between Friends And Family

But social workers say commercial fishermen are an independent lot, reluctant to ask for this kind of help. If they're turning to anyone, they are looking to family and friends like Diane Phillips.

Phillips (called "Momma D") is not a professional counselor. She fishes and guides boat tours. But she's a good listener and has lived in Hopedale for a long time. Lately, she says, the extra folding chair on the porch in front of her weathered trailer is almost always occupied.

"Most of the commercial fishermen have fractured families at this point. Not that they're divorced, but a lot of the young mothers have made the decision to stay in Mississippi or in north Louisiana so they don't have to worry about the home, everything we've dealt with since Katrina," Phillips says.

Just as some of those wives were looking to come back, just when things seemed to be turning around, the spill happened.

"It's always gonna bring out the best in some and worst in others," says Petrina Balser, who grew up in the fishing towns of St. Bernard Parish. She now runs a Catholic Charities crisis center there.

"I have actually seen families, longtime friends who are not speaking anymore because of the anger issues, the blame -- you getting on, I'm not. And it's a really, really sad thing to see," she says.

But Balser also says the Gulf's fishing communities are full of incredibly resilient people. They do have a tough road ahead, but they have weathered many a previous storm.

Pressure On For Swift Makeover Of Drilling Regulator July 5, 2010