Accessibility links
As 'Truth-O-Meter' Spreads, Politicians Wince PolitiFact, a Pulitzer Prize-winning project created to fact-check politicians' claims, is teaming up with news outlets around the country to expand its reach. In Texas, where a contentious governor's race is under way, politicians are chafing at the ratings they're getting on the project's "Truth-O-Meter." 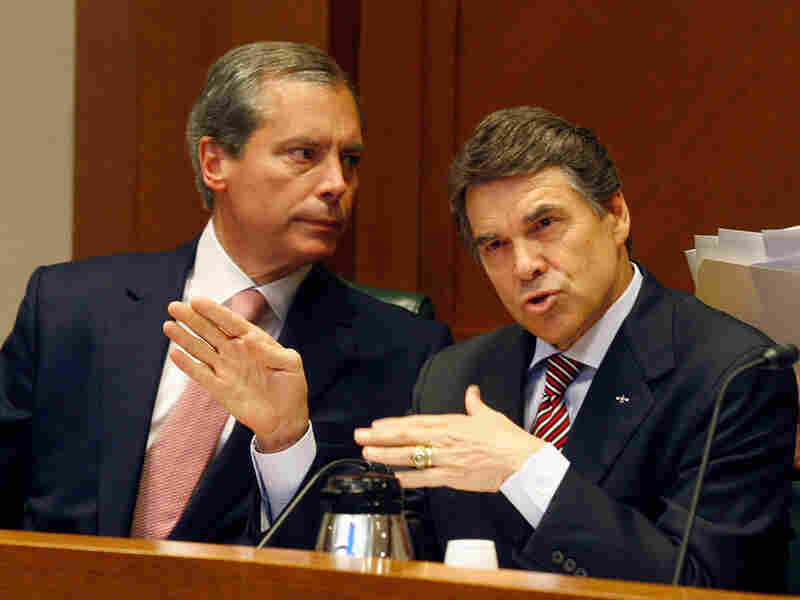 Texas Lt. Gov. David Dewhurst (left) and Gov. Rick Perry, shown in Austin on April 13, are among the politicians whose statements have been fact-checked by PolitiFact Texas. Jack Plunkett/AP hide caption 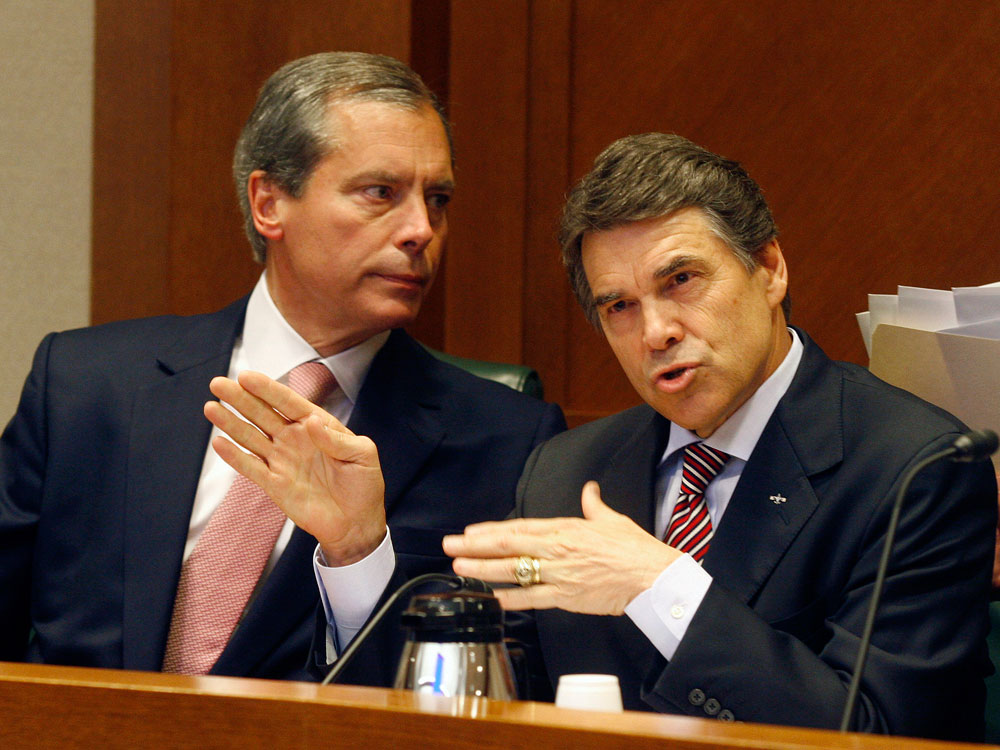 Texas Lt. Gov. David Dewhurst (left) and Gov. Rick Perry, shown in Austin on April 13, are among the politicians whose statements have been fact-checked by PolitiFact Texas.

Texas Lt. Gov. David Dewhurst woke up the other day to find the newspaper had declared on the front page that he was dead wrong.

To be precise, the Austin American-Statesman said Dewhurst had made statements about kidnapping in Phoenix that were FALSE. It wrote it just like that, in capital letters, accompanied by a needle pinned to empty in what the newspaper calls "The Truth-O-Meter."

He's gotten more favorable judgments, too, but Dewhurst, a Republican running for re-election this year, was not amused. "This is regrettably a new low for the Austin American-Statesman and for this particular group," Dewhurst told NPR. "It shouldn't be in the newspaper. It should be on the editorial page. I mean, for heaven's sake."

"This particular group" is a reference to the handful of journalists working for the newspaper's PolitiFact Texas desk. It's an offshoot of PolitiFact, a Pulitzer Prize-winning project that is the brainchild of Bill Adair of the St. Petersburg Times. He created the Truth-O-Meter to grade the claims of politicians of both parties on a national level. It is a tremendous expansion of the effort news outlets have made for a generation to fact-check political ads during campaign seasons. Adair is keeping tabs, for example, on progress made by President Obama on the hundreds of promises he made while a candidate.

Now Adair is training journalists at news outlets in Florida, Georgia, Texas, Ohio and Rhode Island to do the same locally, and he's also appearing periodically on NPR and NPR.org to fact-check claims throughout this year's campaign season.

The American-Statesman was the first regional news outlet to unveil its own Truth-O-Meter, and that first stretch was a rough one.

"At the start, [we] had some vigorous conversations about why we've concluded what we did, and why they thought we were off our rockers," recalls Gardner Selby, a reporter and editor for the PolitiFact Texas desk. "I have a press release that was issued by Gov. [Rick] Perry's campaign. The headline is, 'Truth-O-Meter is Broken.' I think that was issued in the first week we were in business."

The PolitiFact franchise represents a major shift in the way mainstream reporters report and share their findings -- with no slapdash he-said, she-said involved. Instead, carefully researched pieces heap praise or criticism on candidates for the truth of what they say on the trail.

Some readers around town say they look forward to PolitiFact stories.

"I think it's good. I'm a conservative, and I think it's good to know what's really true, not what the slant is on either the liberal side or the Republican side," says Kay Page, 41, an administrative assistant.

Michael McCathern, 35, a land surveyor who buys the paper every day, says he reads the PolitiFact stories when they appear. "Someone's got to look into if what they're saying is fact or not fact," he says.

Andrea Don, 24, an expectant mother who’s not currently working, says the reporters are just doing their jobs. "I like them better [than the politicians],” she says.

"I think that’s OK, as long it is the facts and you're not distorting the truth," says Yolanda Dover, 47, who works in licensing people to install underground storage tanks for state of Texas. "But also, the name-calling -- I don't think that's appropriate."

Ah, yes. PolitiFact Texas calls no one a liar. But -- and this is a big but -- the strongest condemnation does rhyme with it: "Pants on Fire." Perry, the governor, has been a repeat offender. But his Democratic challenger, Bill White, has also shown up. And so has the state Democratic chairman. 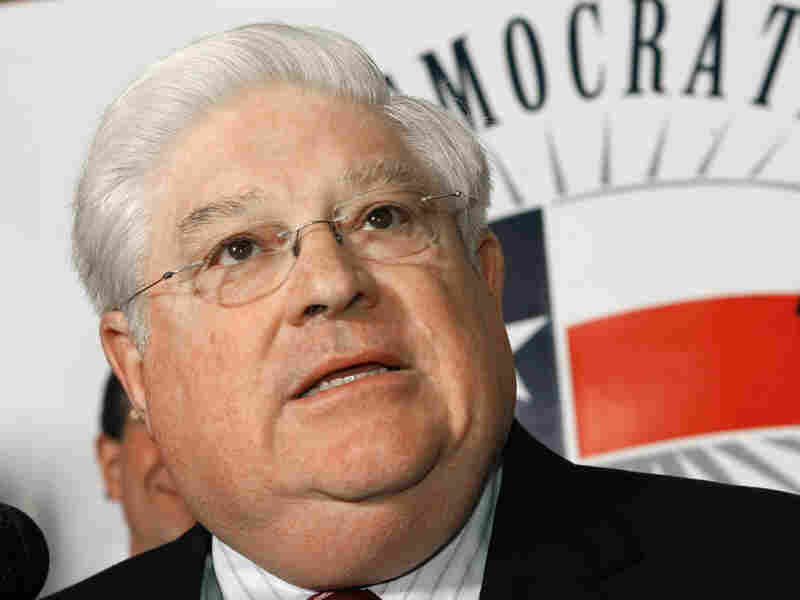 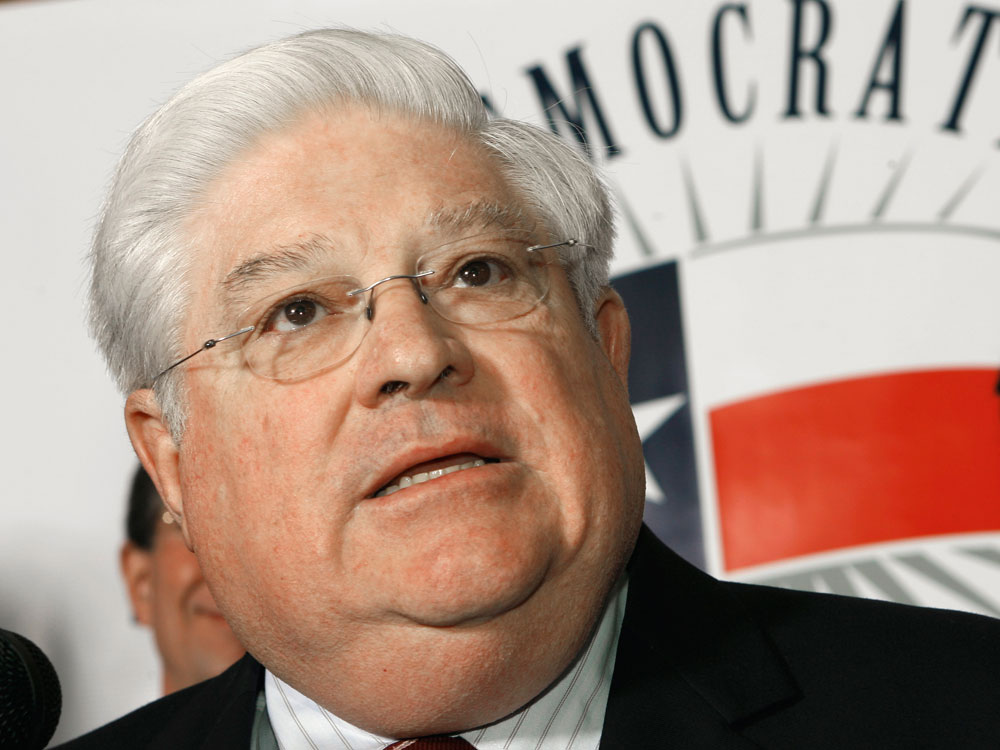 Bogged Down In Details?

It has irked politicians on both sides. Democratic consultants who gathered for drinks recently at Joe's Bar and Grill in Austin had few kind words for the American-Statesman.

"PolitiFact, hopefully, was going to be a mechanism to cut through the crap that both of us put out on each side, and then we can have a fair fight," said Jeff Crosby, who focuses on direct mail. (To be perfectly candid, he calls it "junk mail.")

Crosby wrinkled his nose. "Hadn't been that way."

The Democrats say the project gets too hung up on the details, missing larger truths. When Perry, a Republican, suggested the BP oil spill in the Gulf of Mexico might be an "act of God," he was widely criticized for seeming to dismiss the company's liability. But PolitiFact Texas infuriated Democrats by saying Perry was technically correct in how he later defined "act of God."

On another occasion, Texas Democratic Chairman Boyd Richie declared Perry was living like the French King Louis XIV in a state-leased mansion. Selby, the PolitiFact Texas reporter, mischievously contradicted him.

"He is pulling out of a statement some all-but-meaningless rhetorical flourish that isn't even central to the point and he's fact-checking that," Cook said. "That doesn't give voters a sense of whether politicians are telling the truth or not."

Digging For The Facts

Selby said his tongue-in-cheek piece made a larger point: Politicians will be held to account for their rhetoric. So let's return to Dewhurst and his claim about kidnapping in Phoenix, made at the state Republican convention last month.

In talking about illegal immigrants, Dewhurst told delegates: "Phoenix, Ariz., I'm told, is now the No. 2 kidnapping capital in the world, right behind Mexico City."

PolitiFact Texas reporter Ciara O'Rourke, who was in the crowd, thought that was a provocative claim. But, she wondered, was it true?

When she asked for Dewhurst's sources, she received links to a bunch of press reports. The earliest such statement was made by an ABC News investigative piece from early 2009. Arizona Gov. Jan Brewer and both Arizona senators have made the same claim. But no politician or media outlet cited hard facts proving it. The Phoenix police department told O'Rourke it doesn't know.

"I called the FBI, Department of State, Interpol, United Nations, Homeland Security -- any agency that we thought could shed some insight into the statement," O'Rourke said at her desk in Austin. "And nothing turned up. Nobody was tracking the statistic in a comparable way."

What's more, officials from firms that insure executives abroad told O'Rourke they don't think Phoenix comes close to Baghdad or Latin American cities. ABC News stood by its reporting to O'Rourke, and to NPR, in response to a request for this story. The network said it was based on its own independent analysis and interviews of experts.

But ABC did not release the foundation of that conclusion. And the American-Statesman's editors decided without the ability to evaluate the material on which the network grounded its conclusions, it doesn't matter what ABC reports: Public officials are responsible for what they say. Hence, the verdict of "false." In fact, editors briefly debated whether it should be a "pants on fire" -- but concluded Dewhurst's reliance on ABC's reporting was a slight mitigating factor.

"I like solving problems and I know the devil's in the details," Dewhurst said. "So I've never had anyone challenge, that I can remember, in the last seven years, the accuracy of what I say."

Not, that is, until now.

Selby of PolitiFact Texas says other journalists have told him they are leery of making a call like that in print for fear people will think they have lost their journalistic objectivity.

"My point of view is quite the opposite," Selby said. "Our whole point is to open people's eyes to what's happening out there. If that involves saying someone's told a half-truth or false statement, so be it."