Accessibility links
Blistering Heat Wave Settles Over East Coast Residents are bracing for what could be days of triple-digit temperatures that are expected to strain utility grids and possibly break records. The National Weather Service issued heat advisories for much of the Northeast, mid-Atlantic and parts of Michigan and Kentucky. 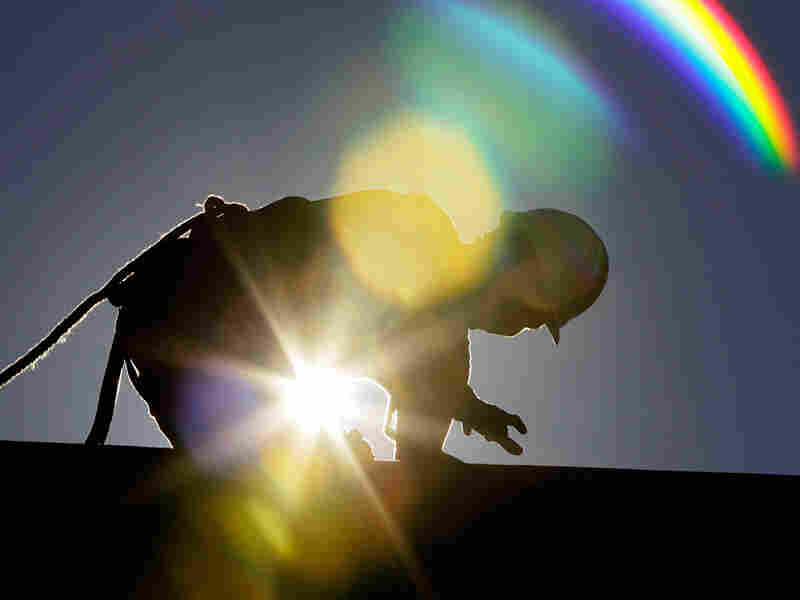 A construction worker bears the brunt of the sun Tuesday while fixing a roof in Chapel Hill, N.C. Gerry Broome/AP hide caption 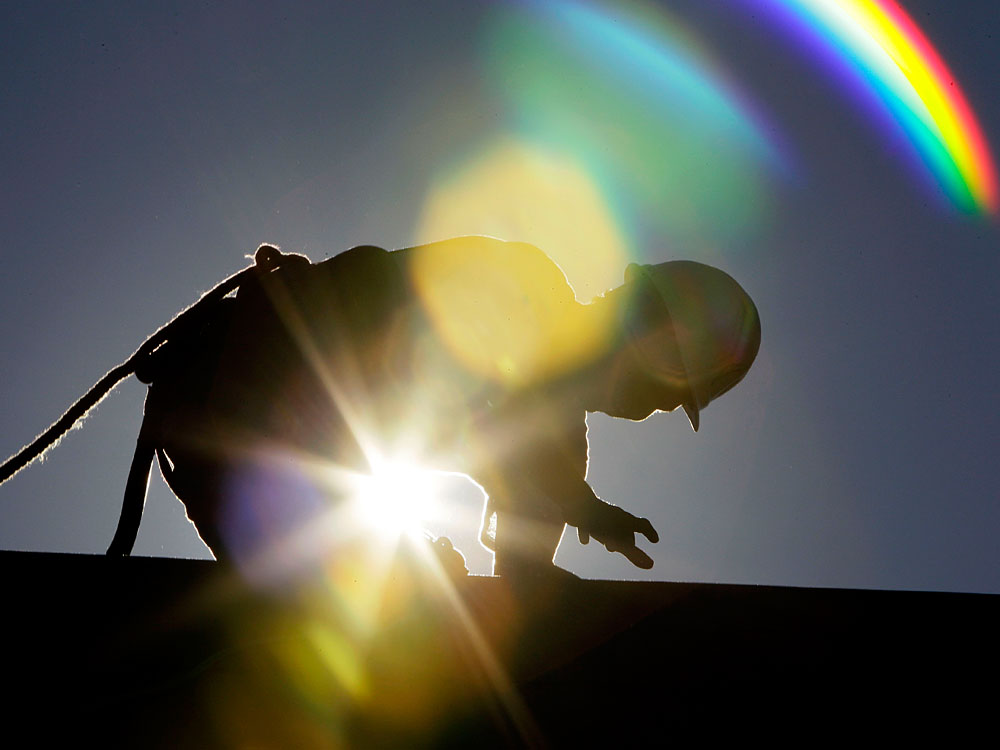 A construction worker bears the brunt of the sun Tuesday while fixing a roof in Chapel Hill, N.C.

The heat is on. Sweltering weather gripped the U.S. from coast to coast over the holiday weekend, leaving residents in the Northeast bracing for triple-digit temperatures expected to last several days and strain utility grids.

The mercury could reach as high as 102 degrees in parts of the mid-Atlantic on Tuesday, meteorologists said. The National Weather Service issued heat advisories until 11 p.m. Wednesday for much of the Northeast, mid-Atlantic and parts of Michigan and Kentucky.

Over the weekend, temperatures pushed into the 90s from Maine to Texas and into the Southwest and Death Valley.

"We might break some records as we move through the week," National Weather Service forecaster Mike Eckert said.

In the East, warm air is "sitting over the top of us, and it's not really going to budge much for the next day or two," Brian Korty, a meteorologist with the National Weather Service in Camp Springs, Md., said Monday.

This is rough, and it's only going to get hotter.

"As the temperature and humidity both get higher, the stress it can put on the human body increases," he said, increasing the "chance of people having problems."

Health officials say 100-degree temperatures and high humidity are a dangerous mix; 11 people have died so far this year from heat-related illnesses. Doctors advise drinking lots of water to stay hydrated, but say caffeinated drinks, alcohol, and sugary beverages can do as much harm as good.

Weather conditions have prompted the opening of scores of cooling centers in many cities to allow people to escape the oppressive heat and humidity.

In New York City, officials have opened nearly 500 cooling centers in places such as public libraries, community centers and some Salvation Army centers. The city is also asking residents to check in on seniors they know and to make sure they are drinking enough water.

— Use a buddy system.

— Adjust to the environment.

— Do not leave children in cars.

Ralph Carter of Brooklyn, N.Y., found air conditioning and a big-screen television at a local senior center. "This gets me out of the house in a place … where I can watch what I want to watch and be around some folks who are pretty good people," he said.

New Yorker Billy Rohan said he's coping well with the heat so far. "We're beating the heat today by drinking a lot of water, [but] I just got back from Iraq, and this is, like, nothing," he said.

Utilities had lower demand for power over the holiday. But with homes and offices cranking up their air conditioners as people returned to work Tuesday, companies worried that the increased demand for electricity could trigger blackouts. Many residents were urged to try to conserve power by turning off nonessential appliances and setting the thermostat no lower than 78 degrees.

In Philadelphia, the increased load from the heat blew fuses at transformers run by the Peco utility, said spokeswoman Karen Muldoon Geus. About 1,900 customers were without power Tuesday morning, down from about 8,000 on Monday, she said.

Robert McCarron, 44, was trying to keep his cool in a navy suit and tie as he walked from a downtown Philadelphia subway station to an office building four blocks away where he was due for a job interview.

"If I was going to a job, you'd better believe I wouldn't be wearing a suit," he said. "This is rough, and it's only going to get hotter."

Massachusetts Lt. Gov. Tim Murray was hospitalized Monday evening after marching in five parades in 90-degree heat over the weekend and feeling under the weather, according to spokesman Kyle Sullivan. He said Murray was in good spirits but was to stay overnight for observation at a hospital in Worcester, about 40 miles west of Boston.

In Michigan, temperatures in the mid-90s claimed the life of a homeless woman found Sunday afternoon lying next to a car in a suburban Detroit parking lot. The Oakland County medical examiner's office told the Detroit Free Press newspaper that the woman died of hyperthermia, an abnormally high body temperature.