Accessibility links
With A Quick Throat Massage, A Voice Returns A 43-year-old woman was silenced for six weeks with a condition called functional dysphonia. But a careful massage of her vocal cords and the muscles in her throat restored her voice in a mere seven minutes.

Listen
With A Quick Throat Massage, A Voice Returns 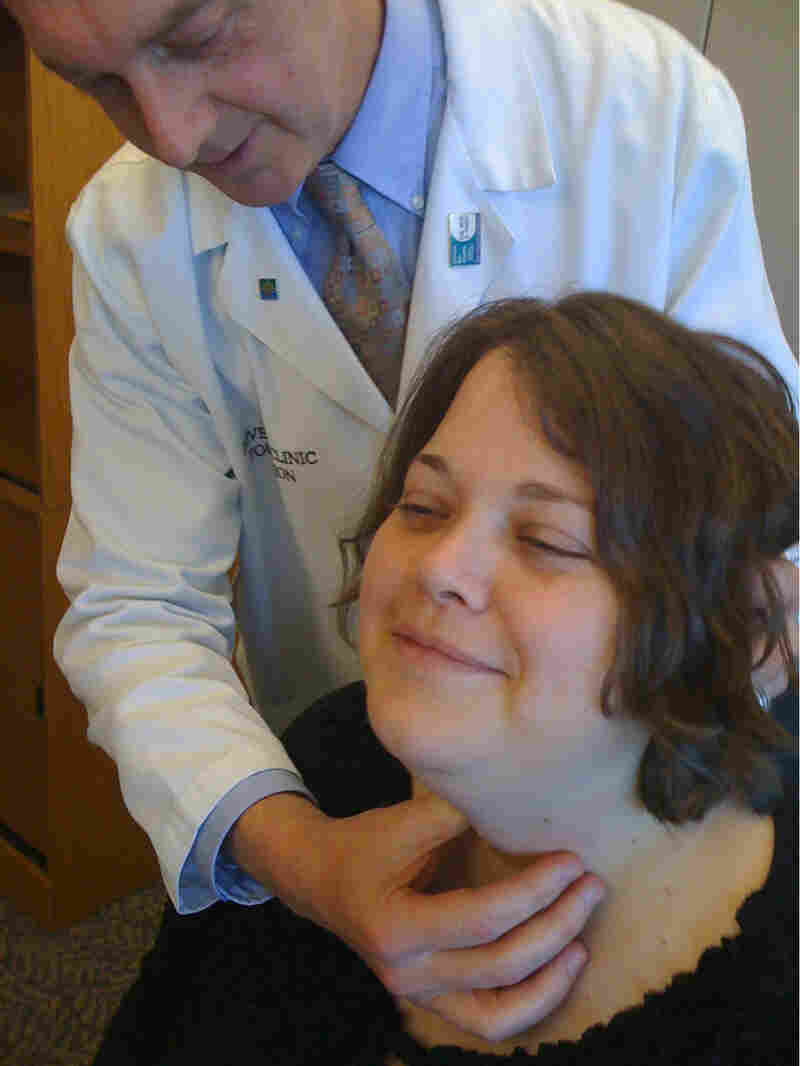 A careful throat massage by Dr. Claudio Milstein restored the voice of Julie Treible in just seven minutes. Treible had functional dysphonia -- a condition that caused the muscles that control the vocal cords to tighten and lock. Gretchen Cuda for NPR hide caption

Julie Treible caught a common spring cold this year and lost her ability to speak -- for six weeks. The cold had turned into bronchitis, then laryngitis -- at least that's what she thought.

"April 1 I got a cold, and this part never got better -- my voice," says the 43-year-old single mom in a forced whisper.

Treible communicated with her family using a white board, because trying to talk made her dizzy. She even passed out once and fell down the stairs, scaring her 10-year-old son and landing her in the hospital.

Not Your Average Frog In The Throat

Without her full voice, Treible had to stop working her job at the meat counter of a local grocery store because customers couldn't understand her. Her loss of voice affected pretty much every aspect of her life.

"I can't talk on the phone, I can't order food at a restaurant because people don't understand me," she says. "My son had a hockey party, and all the parents were sitting around and nobody talked to me. They just sat there. And I know it's because I can't talk back, but I really didn't feel a part of anything."

Scopes of her throat, CT scans, an MRI and visits to various specialists yielded no answers. But after an appointment at the Cleveland Clinic Head and Neck Institute, she's hopeful that will change.

Claudio Milstein, a voice specialist, is optimistic he can get Treible speaking again and send her home that day. With Treible seated in a chair, Milstein stands behind her and places his hands on her neck. He begins by manipulating the muscles in her throat with his fingers.

"I'm going to stretch the muscles around your voice box," he says. A few small pops are audible as he works. "Those cracks, you hear that? Those are normal, so don't be concerned."

Treible remains silent, wincing slightly as Milstein presses against her voice box. He turns her head from side to side and then presses down on her shoulders. To the casual observer, it looks something like a chair massage.

"We're going to start working with your voice now," Milstein says. "We're going to have you make a sound like 'eeee' without strain. OK, so long 'eeees.' "

Treible lets out a shaky sound in her raspy, strained voice.

While Milstein works, massaging her shoulders, neck and throat, Treible makes a continuous "e" sound, pausing for breaths, then switching to "oooo." Within minutes, the raspy whisper begins to disappear.

Milstein asks Treible to say the word "one" over and over. Treible repeats it back in a sing-song voice. At first it's a little scratchy, but something has definitely changed. It's a real voice. Treible smiles slightly.

There's a brief pause as Treible contemplates what has just happened.

"You can talk now," Milstein says.

Treible's condition, called functional dysphonia, is caused when the muscles that control the vocal cords tighten up and lock. In Treible's case, the vocal cords were locked in an open position so that the air from her lungs simply passed over but not across the vocal cords themselves, so they were unable to vibrate and produce sound.

By massaging and relaxing the muscles in her throat, Milstein was able to release the vocal cords and allow Treible to speak again -- all in about seven minutes.

"In order to produce voice, you need to have a very good balance of muscle tone in a lot of different muscles that are involved in voice production," Milstein says. "So an intervention like this, where basically you manipulate these muscles and try to restore the internal balance, is very effective."

The problem, it turns out, is fairly common. Milstein estimates he sees about 10 patients like Treible every month, some of whom have been without a voice for up to two to three years. One reason for the delay in treatment, Milstein says, is that things like cancer, infection, acid reflux and neurological problems need to be ruled out -- and those diagnostics may involve multiple doctors, medications and expensive tests.

Nelson Roy, a professor of speech language pathology at the University of Utah, says there is a definite shortage of speech pathologists who specialize in voice, and among them there is still a wide range of ability and experience.

"When I look at the larynx and there might be a little bit of redness" but the patient talks in a hoarse voice, says Roy, "you have to be able to say the inflammation I'm seeing is insufficient to produce that kind of voice problem."

Furthermore, Roy says, no one really understands the underlying cause of functional dysphonia, and that has led many doctors to believe the disorder is psychological in nature. Historically, many patients have languished in psychological treatment while their physical problem never got better.

"These are complicated cases -- you're really straddling the territory between mind and body, and that's the territory medicine has a difficult time with," Roy says.

Psychological and stress management therapies are rarely effective alone, Roy says, and are best combined with a hands-on treatment or therapy where the patient learns how to use the voice differently. There is plenty of clinical evidence showing that physical manipulations of the voice box and voice therapy can be extraordinarily effective, but few controlled studies have compared treatments or studied their long-term effectiveness.

Although a subset of patients do experience relapses, Milstein says that in his hands, most patients have a permanent recovery. He demonstrates a set of vocal exercises for Treible to do several times a day for the next week after she leaves, which he says will help her strengthen her vocal cords and help them maintain their new relaxed position.

However, today she has just one piece of homework.

"For the rest of today, you have to talk nonstop," Milstein says with a smile. "I don't care who you talk to or what you talk about, just talk and talk and talk."