Accessibility links
'Hamlet's BlackBerry': To Surf Or Not To Surf? Welcome to the 21st century, where we're all connected, all the time. Whether or not this is a good thing is the subject of Hamlet's Blackberry, a new book by William Powers that takes a magnifying glass to the "conundrum of connectedness" -- and looks to the past to find ways to deal with information overload. 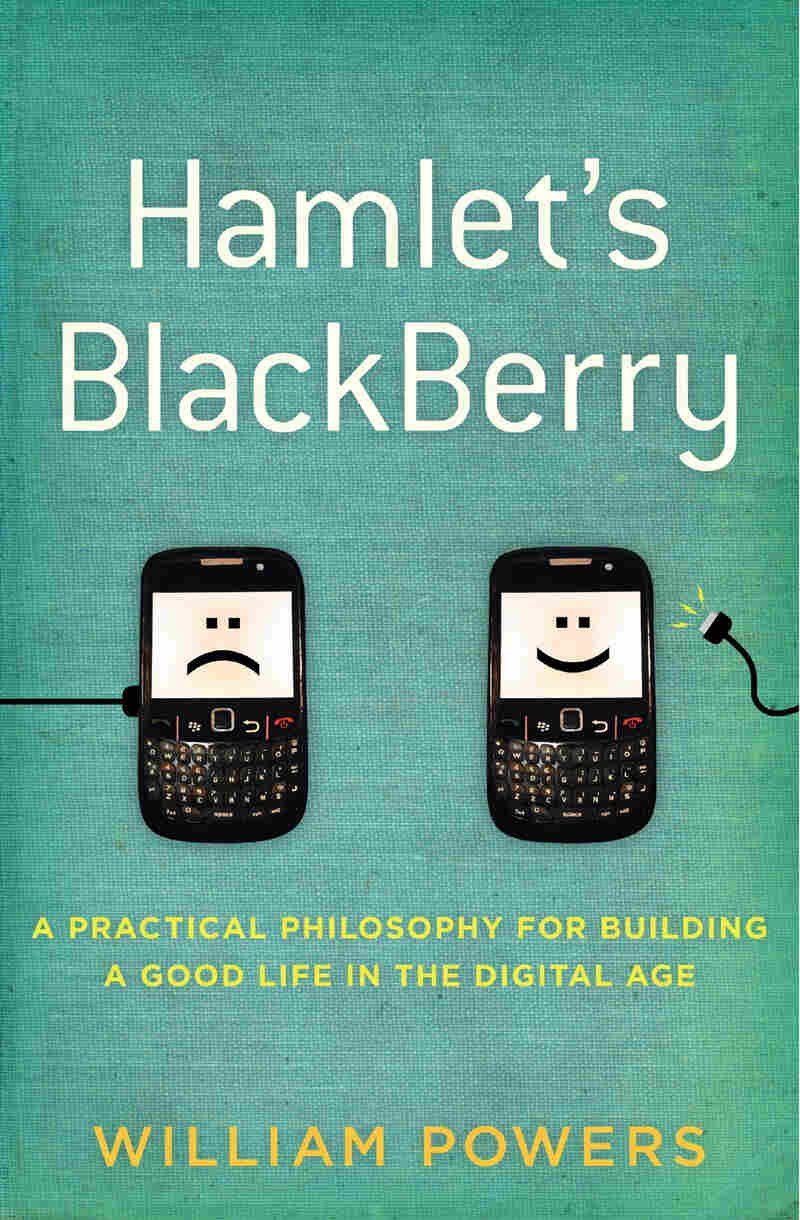 Do you find yourself checking Facebook as soon as you wake up in the morning? Do you answer e-mails on your Blackberry while surfing the Web? Even as you read this article, is your right index finger twitching on the mouse, just itching to click on something new?

If so, welcome to the 21st century. Without even realizing it, we've signed up for a life in which we're all connected, all the time. Whether or not this is a good thing is the subject of Hamlet's Blackberry, a new book by William Powers based on an essay he penned in 2007.

Early in the book, Powers describes a scene that should strike many as familiar: He is standing at a crosswalk in the middle of Manhattan, alongside five or eight other people -- all of whom are staring intently at some digital device.

"Here I was in New York, the most fantastic city in the world -- so much to look at, to see and hear, and everybody around me essentially wasn't present," he tells NPR's Mary Louise Kelly. "These gadgets are wonderful, and they do fantastic stuff for us all day long, but to miss out on your surroundings all the time, which I think we increasingly do -- I really question that."

But Powers' book is not a Luddite manifesto. The writer may question the way we use our gadgets, but he certainly doesn't condemn it. ("With a few keystrokes, I can bring up an old manuscript from the British Museum. That is miraculous," he says.) He does, however, recognize the downside of constantly being flooded with new information -- or what he calls the "conundrum of connectedness."

"We don't have any gaps, any breaks in which to make sense of it; do something new, creative with it; enjoy it," he says.

Among the things that suffer from our overconnectedness, Powers says, are relationships.

"If we're constantly toggling between people on Facebook and texts and all these new ways of connecting all day long, and we never have a sustained connection, it's not really connectedness," Powers says. "It's sort of the opposite of connectedness." 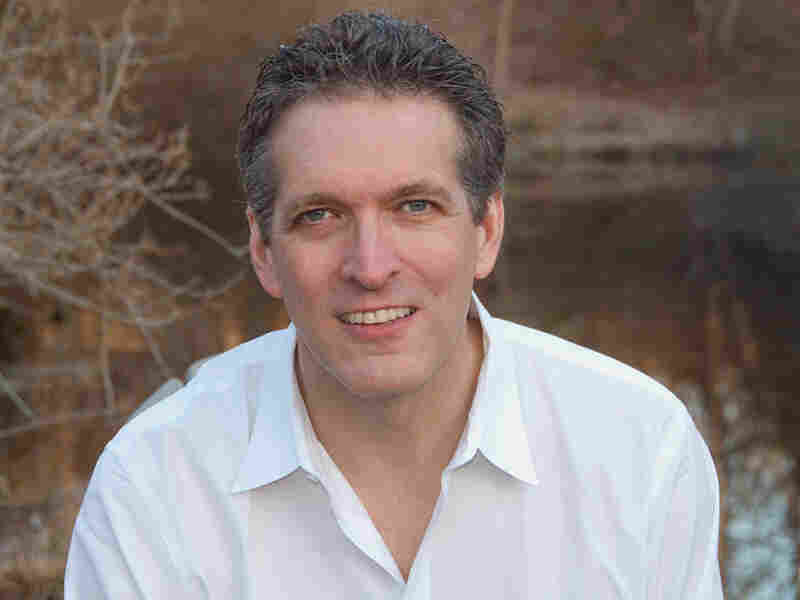 William Powers began his career writing for The Washington Post, with a focus on media topics in the information age. Anne Ghory-Goodman hide caption 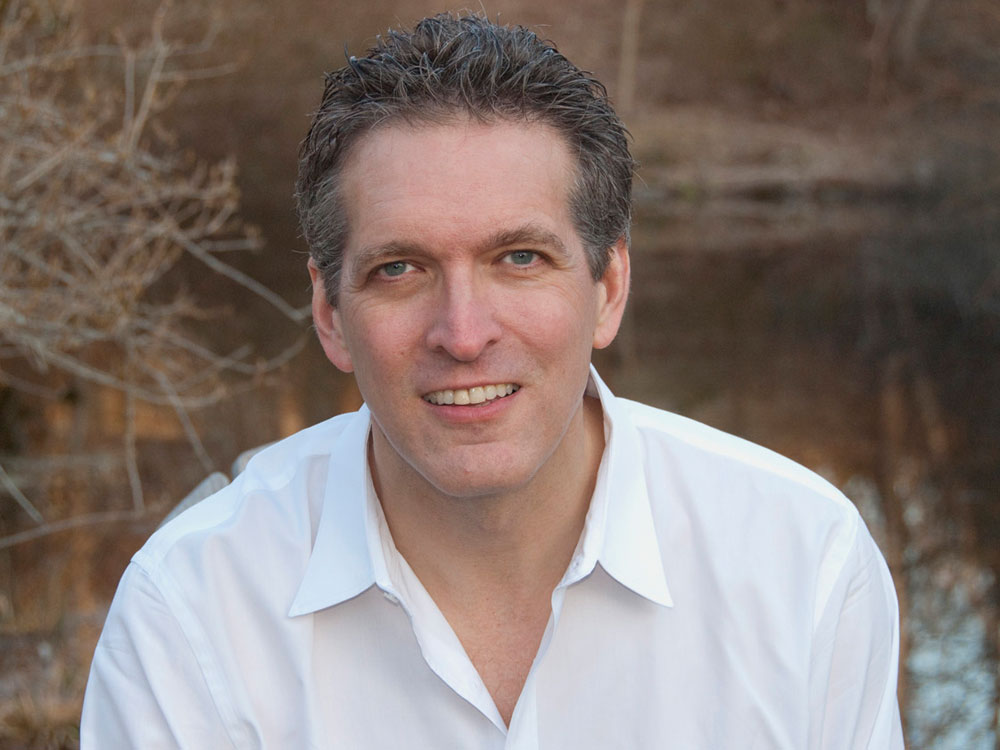 William Powers began his career writing for The Washington Post, with a focus on media topics in the information age.

His aim in Hamlet's Blackberry is to help teach people how to connect more wisely. To that end, Powers looked to the past, where he found several precedents to both the current information age and the anxiety that has come with it.

The Roman philosopher Seneca, for example, was plagued by the connectedness that came along with living in the capital of a vast empire.

Another major figure Powers examines actually developed his own strategies for coping with overstimulation. In William Shakespeare's Hamlet, the titular Danish prince is visited by the ghost of his murdered father, who informs Hamlet that his murderer is none other than Hamlet's uncle.

"Hamlet is so overwhelmed by this news, this new piece of information, that he's not sure what to do with it," Powers says.

So Hamlet reaches into his pocket and pulls out his "tables," an object Powers describes as a sort of proto-electronic planner. Powers says that in the Elizabethan age, tables were a new gadget designed to help people bring order to their lives.

"It was basically an erasable, plaster-like surface inside of a little booklet," he says. "You could write notes during the day and then wipe them away clean at night."

In other words, even denizens of the late 16th century had a method for dealing with information overload.

But how are we of the 21st century supposed to cope with that same problem? Powers has one suggestion that's both utterly simple and almost impossible to imagine following: just disconnect. His family, for example, takes an "Internet Sabbath" every weekend.

"We turn off the household modem, and we don't have smart phones, so therefore we can't get [in] our inboxes the whole weekend. We can't do Web surfing. We can still call, we can still text -- but we're not really texting addicts," he explains. "We really enter this other zone, and it's wonderful."

According to Powers, the positive effects of these technology breaks are felt long after the weekends are over.

"Even when we're connected, we can feel the benefits of having been disconnected a couple days ago. It really helps," he says. "It's just about that simple word, 'balance.' "

Not that he thinks unplugging your modem is necessarily easy.

"It's really hard to pull away. You have to know why you're doing it, and really believe," he says. "What I'm about here is trying to convince people that it's worth doing."

This book is about a yearning and a need. It’s about finding a quiet, spacious place where the mind can wander free. We all know what that place feels like, and we used to know how to get there. But lately we’re having trouble finding it.

Like the people in the story you just read, we live in a world where everyone is connected to everyone else all the time. We’re not literally in a room that’s floated away from the earth, but we’re definitely in a new place, and it’s technology that has brought us here. Our room is the digital space, and we tap each other through our connected screens. Today we’re always just a few taps away from millions of other people, from endless information and stimulation. Family and friends, work and play, news and ideas—sometimes it seems everything we care about has moved to the digital room. So we spend our days there, living in this new ultra-connected way.

We’ve been at it for about a decade now, and it’s been thrilling and rewarding in many ways. When the whole world is within easy reach, there’s no end of things to see and do. Sometimes it feels like a kind of a paradise.

However, there’s a big asterisk to life in this amazing place. We’ve been doing our best to ignore it, but it won’t go away. It comes down to this: We’re all busier. Much, much busier. It’s a lot of work managing all this connectedness. The e-mails, texts, and voicemails; the pokes, prods, and tweets; the alerts and comments; the links, tags, and posts; the photos and videos; the blogs and vlogs; the searches, downloads, uploads, files, and folders; feeds and filters; walls and widgets; tags and clouds; the usernames, passcodes, and access keys; pop-ups and banners; ringtones and vibrations. That’s just a small sample of what we navigate each day in the room. By the time you read this there will be completely new modes of connecting that are all the rage. Our tools are fertile, constantly multiplying.

As they do, so does our busyness. Little by little, our workdays grow more crowded. When you carry a mobile device, all things digital (and all people) are along for the ride. Home life is busier too. Much of what used to be called free time has been colonized by our myriad connective obligations, and so is no longer free.

It’s easy to blame all this on the tools. Too easy. These tools are fantastically useful and enrich our lives in countless ways. Like all new technologies, they have flaws, but at bottom they can’t make us busy until we make them busy first. We’re the prime movers here. We’re always connected because we’re always connecting.

Beyond the sheer mental workload, our thoughts have acquired a new orientation. Of the two mental worlds everyone inhabits, the inner and the outer, the latter increasingly rules. The more connected we are, the more we depend on the world outside ourselves to tell us how to think and live. There’s always been a conflict between the exterior, social self and the interior, private one. The struggle to reconcile them is central to the human experience, one of the great themes of philosophy, literature, and art. In our own lifetime, the balance has tilted decisively in one direction. We hear the voices of others, and are directed by those voices, rather than by our own. We don’t turn inward as often or as easily as we used to.

In one sense, the digital sphere is all about differentiating oneself from others. Anyone with a computer can have a blog now, and the possibilities for self-expression are endless. However, this expression takes place entirely within the digital crowd, which frames and defines it. This makes us more reactive, our thinking contingent on others. To be hooked up to the crowd all day is a very particular way to go through life.

For a long time, there was an inclination to shrug all of this off as a mere transitional issue, a passing symptom of technological change. These are early days, we tell ourselves. Eventually, life will calm down and the inner self will revive. There’s a basic wisdom in this hopeful view. It’s never a good idea to buy into the dark fears of the techno-Cassandras, who generally turn out to be wrong. Human beings are skillful at figuring out the best uses for new tools. However, it can take a while. The future is full of promise, but we have to focus on the present, how we’re living, thinking, and feeling right now.

Like the two wayfarers in my story, a lot of us are feeling tapped out, hungry for some time away from the crowd. Life in the digital room would be saner and more fulfilling if we knew how to leave it now and then.

But can we leave? It’s nice to imagine that there’s a door somewhere and all you’d have to do is step through it and you’ll be in a different place. A less connected place where time isn’t so fugitive and the mind can slow down and be itself again. If someone told you that that place existed and he knew the way there, would you follow him?

What I’m proposing here is a new digital philosophy, a way of thinking that takes into account the human need to connect outward, to answer the call of the crowd, as well as the opposite need for time and space apart. The key is to strike a balance between the two impulses.