Accessibility links
Behind Bars, Russian Tycoon Makes Bid For Freedom Former oil magnate Mikhail Khodorkovsky was once one of the world's richest men. But observers say he crossed Russian leader Vladimir Putin, landing him in jail. Now, facing more prison time, he's capturing attention from inside prison in a way he never did as a free man. 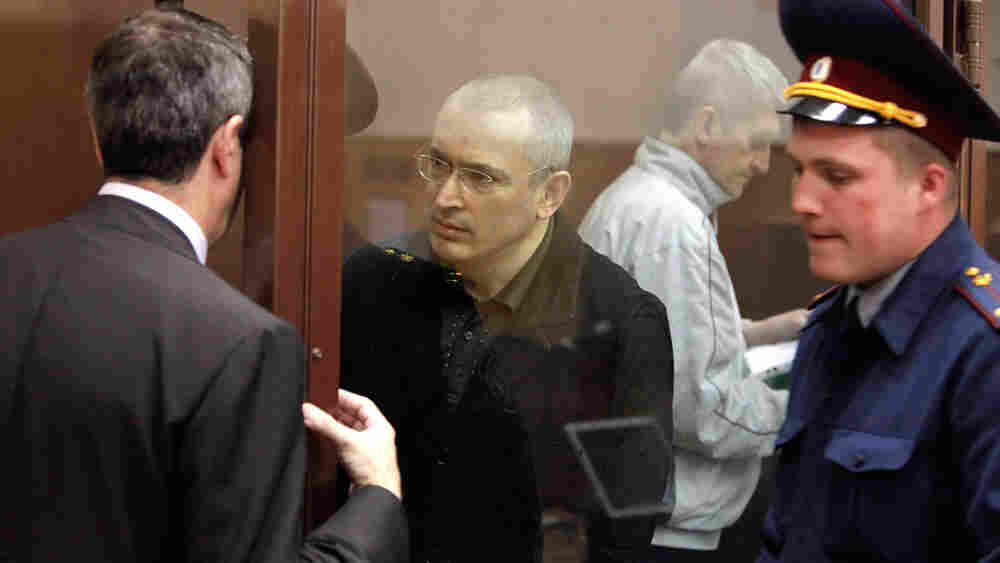 Former Yukos CEO Mikhail Khodorkovsky (center) speaks to his lawyer from behind a glass wall in court. Khodorkovsky, once Russia's richest man, was sentenced in 2005 to nine years in prison. Now, he faces new charges. Alexander Zemlianichenko/AP hide caption 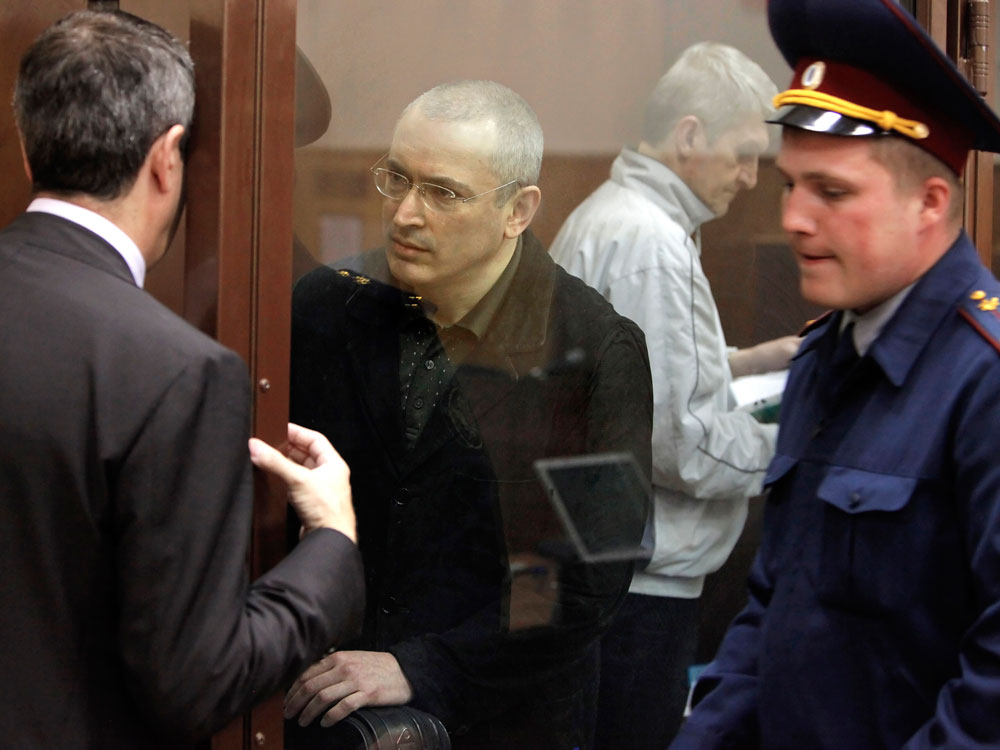 Former Yukos CEO Mikhail Khodorkovsky (center) speaks to his lawyer from behind a glass wall in court. Khodorkovsky, once Russia's richest man, was sentenced in 2005 to nine years in prison. Now, he faces new charges.

In the eyes of Russian leaders, he is a corporate criminal. Outside observers say he's a victim, and a symbol of everything wrong in Russia.

Mikhail Khodorkovsky, 47, was once Russia's richest man, an oil tycoon whose wealth and influence caught the eye of Russia's political elite.

The question is: Did that land him in jail?

Khodorkovsky, once in charge of the Russian oil behemoth Yukos, was arrested by the government in 2003 on charges of tax evasion. He was sentenced in 2005 to nine years in prison, a sentence later reduced to eight years. He has spent the past few years in a harsh Siberian prison camp, a modern-day gulag.

You have to see Russia beyond the window dressing, the Russia where a political opponent can be sent to prison for many years and his property taken from him.

Now, he faces new charges. He and a former business partner are accused of stealing billions of dollars -- not to mention 350 million tons of crude oil -- from Yukos. A conviction could mean a 22-year sentence.

The trial has lasted months, and each day Khodorkovsky is led by security guards through the courtroom and into an isolation chamber. This is common practice in Russia -- often, defendants watch their trials from inside an "aquarium," as the chamber is described by critics.

In response to written questions posed by NPR, Khodorkovsky described what his days are like.

"I sit in a cage made of bulletproof, slightly tinted glass," he wrote. "The cage muffles the sound, so I see the courtroom more clearly and feel a bit detached. With less background noise, I can concentrate more on people's emotions."

Khodorkovsky has insisted that he is innocent and the target of Russia's political elite.

Not long ago, Khodorkovsky was a business icon -- rich, savvy and shrewd, and with a long list of enemies. And he was politically active, funding several opposition parties. 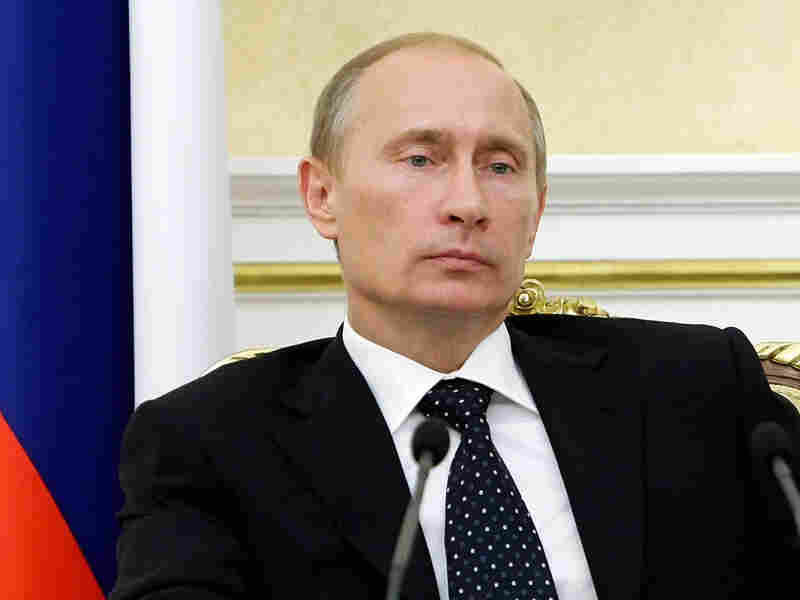 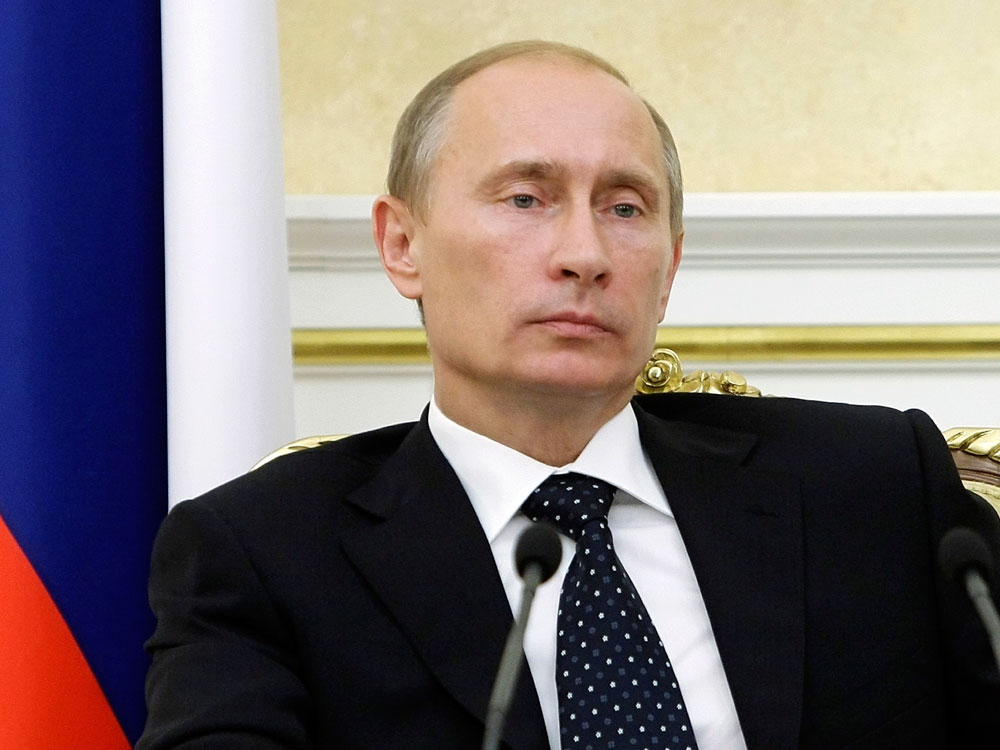 Now, seven years since his arrest, Khodorkovsky's ultimate fate remains a mystery, as does so much in Russia's Kafkaesque legal system. It is never clear whether a defendant was on the wrong side of the law -- or, someone else.

Is Putin Behind The Prosecution?

Khodorkovsky's mistake, many observers believe, was becoming too dangerous in the eyes of Vladimir Putin, who was Russia's president in 2003 and is now prime minister.

Putin rarely speaks of Khodorkovsky in public. And he doesn't seem happy when he's asked about it, as he was this past December, when he greeted the question with a loud sigh.

Putin went on to explain that Yukos, under Khodorkovsky, was never a model of good behavior. For one thing, the company's security agency, Putin said, was accused of engaging in contract killing.

"These crimes are proven," Putin said. "We should not forget about that."

Khodorkovsky was never implicated in those events. As for the defendant's current charges and ongoing trial, Putin said the court "will act according to law."

Observers like political analyst Masha Lipman believe Putin will ultimately guide the legal process and decide what happens to Khodorkovsky.

But reading Putin's mind is impossible, said Lipman, of the Carnegie Moscow Center. The prime minister seems to enjoy "putting to shame all of the guessers, whatever the decision is."

A Trial Full Of Surprises

And one recent decision caught people by surprise. Two men -- one current and one former official in Putin's government -- were permitted to testify at Khodorkovsky's trial. Rather than support the government's case, they helped Khodorkovsky, saying if he stole that much oil, they would have known about it.

A turning point? Lipman believes not. She said Putin may have been hoping, for a few days, to halt the negative publicity around the trial.

For me, Khodorkovsky's an ordinary criminal serving his sentence.

"This one twist, this one turn, adds a grain of propriety to it without having a crucial impact," Lipman said.

Each day of the trial brings a new development or new character.

Kevin Dages, an American expert in accounting and business valuation, has provided expert testimony in more than 25 trials in the U.S. and was never turned away by a court. Until now.

The Russian judge agreed with the government's argument that Dages wasn't familiar enough with Russian corporate law. Outside the courthouse, Dages said he had hoped to testify about Yukos bank records that appear to account for the money Khodorkovsky and his co-defendant Platon Lebedev are accused of stealing.

"What they're being charged with is nothing more than the movement of funds from one pocket to the other, in what is a many pocketed pair of jeans but still all within the same family," he said.

Critics of the trial see the charges as vague at best, and they say Khodorkovsky's experience is the proof that Russia's legal system is corrupt.

"I was really upset when I got into that room," said Mary Louise Beck, a member of the German parliament who has traveled several times to Moscow to sit in.

"To throw people in jail because you are afraid they might be of political danger to you is authoritarian. Russia has to come back to the rule of law," Beck said. "Russia is member of the Council of Europe. You have very firm principles there, and Russia doesn't go along with it."

The defendant has embraced outside support. He has a PR machine getting his message out, and he's written op-ed pieces in newspapers like The Washington Post.

None of that has impressed Putin's allies, including Sergei Abeltsev, a member of the Russian Duma, the lower house of parliament. When Khodorkovsky's criticism of the Russian legal system showed up in a Russian newspaper, Abeltsev filed a complaint saying the paper broke a Russian law against extremism.

Abeltsev suggested that Western observers were buying into a storyline that paints Khodorkovsky as a tragic victim.

"For me, Khodorkovsky's an ordinary criminal serving his sentence," Abeltsev said in an interview. "I don't think he's shown any remorse. Apparently, he's embittered and calling for an overthrow of our constitutional system."

Demanding Attention From Behind Bars

In his writings, Khodorkovsky has called for a Russia free of corruption, with a transparent legal system. Guilty or not, Khodorkovsky has developed a message, and he's capturing attention from inside prison in a way he never did as a free man.

Khodorkovsky's 76-year-old mother, Marina, often comes to the trial. After her son became a successful businessman, she says she remembers asking him if he feared going to jail.

" 'Mother,' he said to me, 'These are new times. We have democracy, and everything will be different,'" she recalled.

Her son was determined not to flee Russia when he had the chance, she said.

"I asked him, 'Do you regret that you stayed?' He thought for some time and said, 'No, I don't regret. Now I am able, with honesty, to look into people's eyes, my children's eyes. If I had fled, they would have said he's a thief, that's why he ran away.' "

As much time as Khodorkovsky spends poring over legal documents in the courtroom, he and his mother often make eye contact.

"Her support is important to me and heartwarming. I know she approves of what I'm doing," Khodorkovsky wrote in the letter to NPR.

His children, including young twin sons Ilya and Gleb, also sometimes attend the proceedings. "I have a real mix of emotions when I see my children in the courtroom, especially Ilya and Gleb. I'm happy to see them. But I know at their age, they need their father with them -- not as an image through glass."