Accessibility links
AIDS Waiting Lists Grow Amid Economic Woes There's a growing list of people who need assistance in paying for AIDS medicines in the U.S. Federal and state assistance under a program call ADAP is falling short by $126 million. Because of the economy, that has led to greater demand from people laid off from work, and shrinking state and federal budgets. 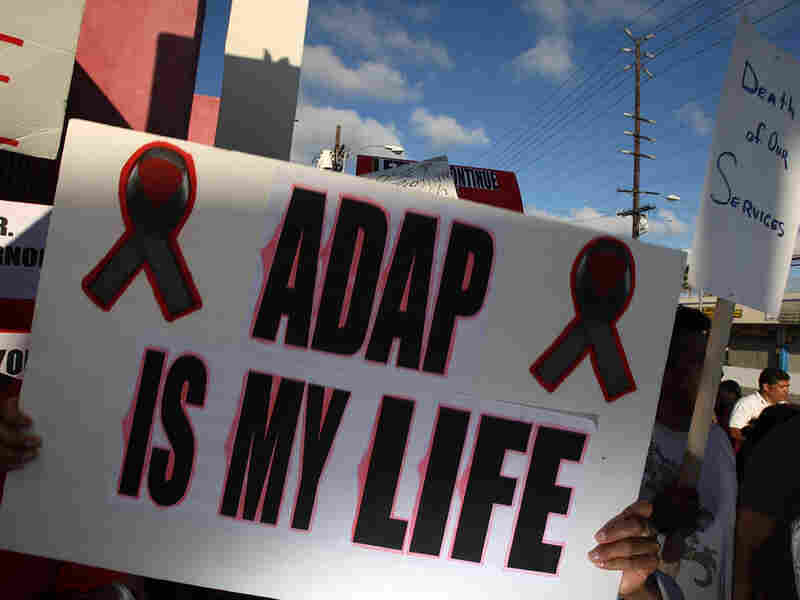 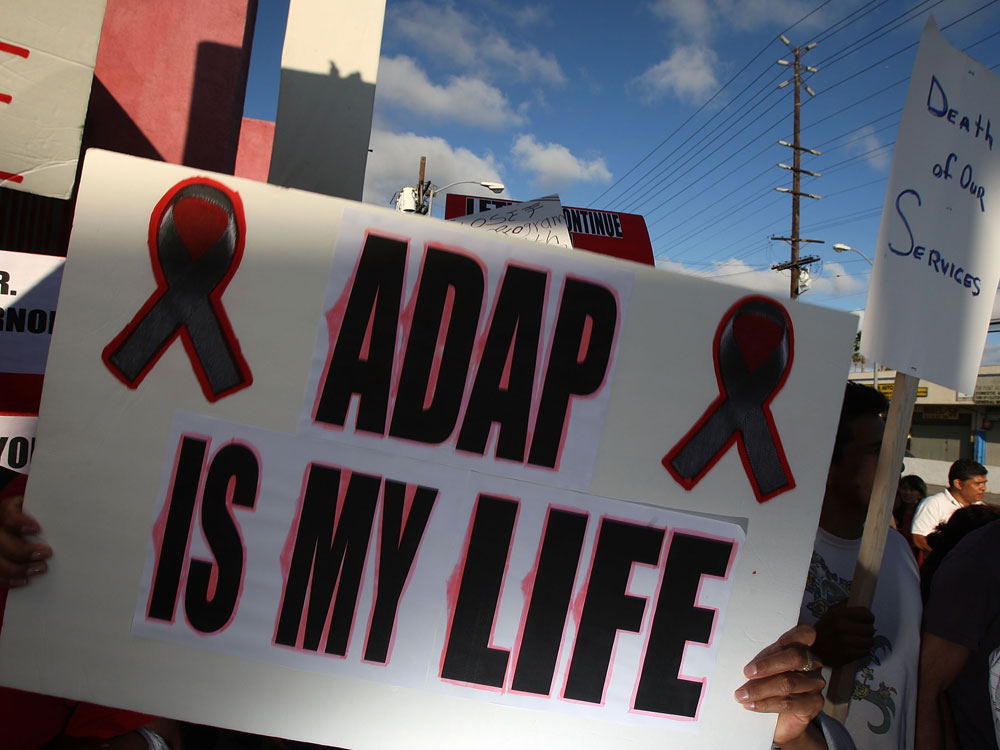 A person who relies on the AIDS Drug Assistance Program marches to protest millions of dollars in cuts to lifesaving AIDS services proposed by California Gov. Arnold Schwarzenegger, June 5, 2009. States are facing increasing demand for AIDS treatment, but little new money is available.

It's a veritable pileup -- a convergence of factors that's led to a long line of HIV/AIDS patients waiting for assistance to pay for the medicines that have helped them live longer and healthier lives.

Now, many people with HIV are losing jobs, along with insurance, or discovering that they are infected at a time when the AIDS Drug Assistance Program -- ADAP -- they depend on is being overwhelmed by demands being made on it. Federal and state budgets aren't meeting the challenge.

As of July 1, Georgia was the latest state to set up a waiting list for people applying for coverage. In June, Florida was forced to do the same. It now has more than 500 people waiting for help with paying for medications. Tom Liberti, the state's chief of the bureau of HIV/AIDS, tried to stave off the inevitable.

"Over the last several months in the latter part of this recession, we have been averaging over 350 patients a month coming forward for assistance," Liberti says.

Demand Increasing, But Not Funding

There are more than 1.4 million people unemployed in Florida, in addition to a population of 3.5 million uninsured. At the same time, the federal government has been expanding testing programs, pushing states to test millions of people for HIV and get people into treatment early.

"So, if you saw a picture of this, you would see that the demand and the number of patients coming forward has gone up dramatically, but the funding that pays for the pharmaceuticals and the drugs did not,” Liberti says.

ADAP provides assistance for nearly 170,000 people nationwide who can't afford the expensive AIDS drugs -- and a lot of people can't on a working person's salary. The drugs mean that people with HIV can not only survive many years but also lead productive lives.

Federal and state ADAP budgets are determined on a year-to-year basis, and there have been minimal or no changes every fiscal year. In fact, states, facing budget shortfalls, are cutting back. More than 2,000 people in 12 states are now on waiting lists, and just as many states are tightening requirements for clients and limiting the list of drugs they will cover.

Struggling To Get Medication

These events were not on 46-year-old Mike Demory's mind in December when he moved to Victor, Mont., from Portland, Ore. In Oregon his medicines and part of his insurance premium were paid for by the state's ADAP.

"I moved here for my mother," Demory says, "My mother has a lot of health problems and I didn't do much investigating as far as what they had ... as plans for medications."

First, there was a monthlong wait to see a doctor. By that time, he says, "I had been without my medication for a month and a half, which is bad for a person [with] HIV."

During that time, the virus started coming back, but he had to get in line behind 18 people who were on Montana's list. He has slowly -- month by month -- been working his way to the top of it, even as it continues to grow.

Luckily, Demory still had a one-month refill back at a pharmacy in Oregon that was sent to him by mail. A case manager in Montana helped him apply for free drugs from pharmaceutical companies through the patient assistance programs that most companies have, which means that he has to apply to three different companies because each of the medications he relies on are manufactured by different pharmaceutical companies. Every 90 days, he will have to apply again for assistance to each of these companies.

Waiting lists for ADAP aren't new. The program has been running over budget since a decade after its inception, but never have the lines been this long. Murray Penner of the National Association of State and Territorial AIDS Directors says it's not just the economy.

"The other factor driving that is just more people living longer, which is the obvious, and that's a good thing over time," Penner says. "It is something that has been coming over a long period of time since all of the new treatments have come into play."

In the past, federal and state governments would appropriate money for emergency assistance. Not this time. Penner says Congress has failed to respond to an appeal from the states for $126 million.

"Everybody is supportive. We've got letters with lots of sign-ons from representatives and senators saying we want more money, but no one is willing to stick their neck out and put more money towards the issue," Penner says.

So, state AIDS directors like Florida's Liberti say they're just hanging on until the next fiscal year.

Under the new health care law, people who are not on ADAP and don't qualify for Medicaid would be eligible for subsidies for health care coverage, but that won't kick in until 2014.