Accessibility links
Exploring The American Dream In The South Bronx Arthur Levine has spent much of his career writing about how tough it is for poor minority kids to get into college. Rarely has this widely respected educator written more urgently than in his latest book, Unequal Fortunes. It was a journey that took him back to his childhood in the South Bronx. 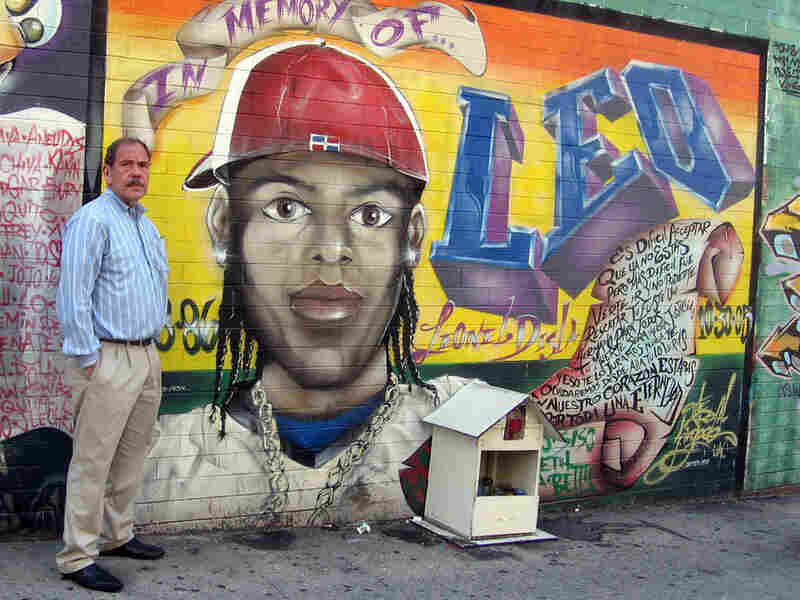 Arthur Levine stands next to a mural for Leo, one of the central players in his new book. Leo was shot and killed by a New York City police officer five years ago. Claudio Sanchez/NPR hide caption 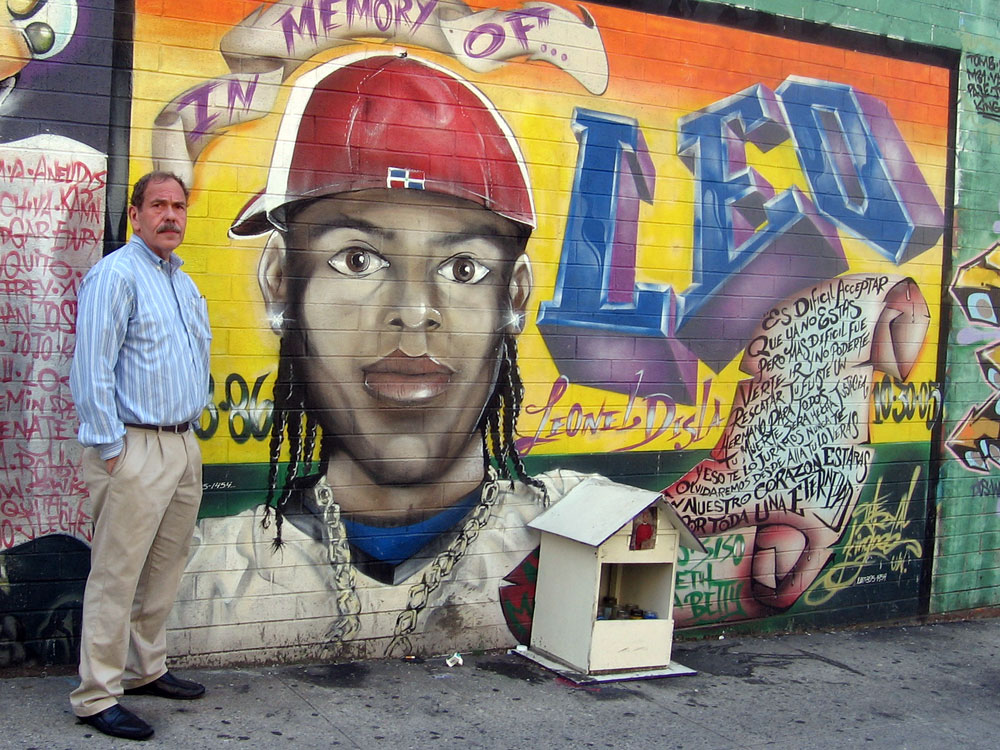 Arthur Levine stands next to a mural for Leo, one of the central players in his new book. Leo was shot and killed by a New York City police officer five years ago.

Arthur Levine has spent much of his career writing about how tough it is for poor minority kids to get into college. But rarely has this widely respected educator and former president of Teachers College at Columbia University written more urgently than in his latest book, Unequal Fortunes.

It was a journey that took him back to his childhood in the South Bronx to figure out why he made it and why most kids living there now don't.

The book, which he and Laura Scheiber, a former student, started 10 years ago, focuses mainly on three 14-year-olds. Two of them, Carlos and Juan Carlos, joined Levine and Scheiber for dinner and cake last month at a Dominican restaurant in the South Bronx to celebrate Levine's 62nd birthday.

They hug, they laugh, they reminisce, and later, in a park down the street, they ponder the book's central question: Is the American dream a myth, an empty promise?

"Aren't you guys the product of the American dream at some level?" Levine asks. "You grew up in families in which your parents didn't have a lot of education. You guys are college graduates."

It's hard to say how their friend Leo would have responded. He's the other 14-year-old in the book. But he was shot and killed by a New York City police officer during a confrontation five years ago. He, like Juan and Juan Carlos, would have been 24.

'A House In The Country'

Earlier in the day, Levine visited Leo's sidewalk memorial a few blocks away.

"At the center of the mural is a picture of Leo. He's wearing a baseball cap with the seal of the Dominican Republic on it. He has long braids," he says.

In front of the 12-foot-high mural sits a small wooden box; inside are a few dried flowers and several veladoras -- tall candles burned down to a nub.

What happened to Leo, says Levine, happens to lots of children growing up in the South Bronx.

Did Leo have a shot of making it out of this neighborhood?

"Once he moved into this neighborhood, the answer is no," Levine says.

For a true believer in the power of education and upward mobility, it's a stunning confession that Levine wants to explain to be fair to Leo.

"Leo understood that education was important. In his diary, he wrote this passage that I'll never forget:

'I know that if I go to college, I'll get the house in the country. I can help my parents. I can marry a girl I respect who graduated from high school.

I haven't been to school in three weeks. I went to school today but didn't go to any classes. I had sex under the stairs.'"

You see, says Levine, Leo faced some pretty tough odds from the day he arrived in New York from the Dominican Republic with his mother at age 8. He was bright, but he struggled with English. He was ambitious but attended overcrowded, dysfunctional, violent schools. He desperately wanted to please those he loved -- especially his mother -- but to avoid getting jumped every day, Leo joined a gang. In the end, he ignored his mother's advice and the streets swallowed Leo whole.

On the corner of 181st Street and Creston Avenue, young mothers push their strollers past P.S. 79, Leo's elementary school -- the same school Levine attended 56 years ago, back when the neighborhood was almost entirely white and the language of the streets was English and sometimes Yiddish.

"This was a neighborhood in which very few parents completed high school, yet, you saw brothers, sisters who were older than you, neighbors, heading off to college. These were kids who were going to have a future better than their parents, which is very different than what goes on today," Levine says. 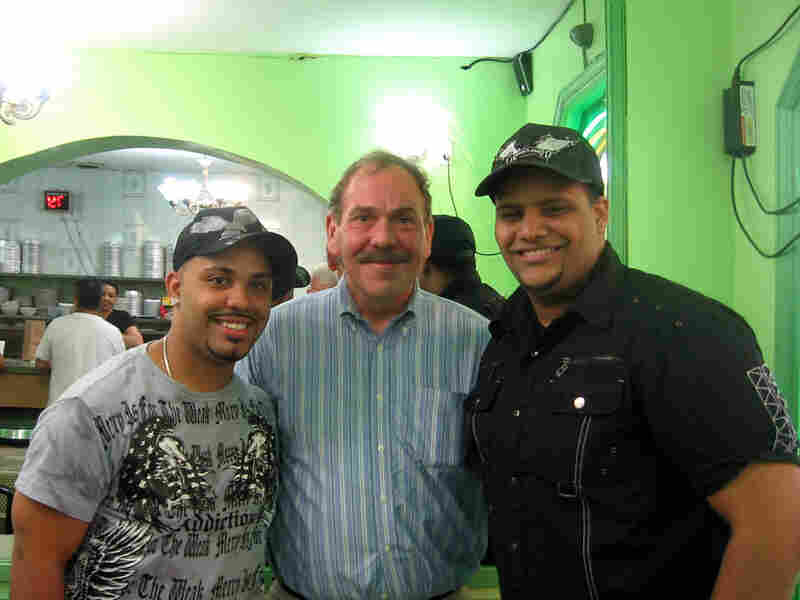 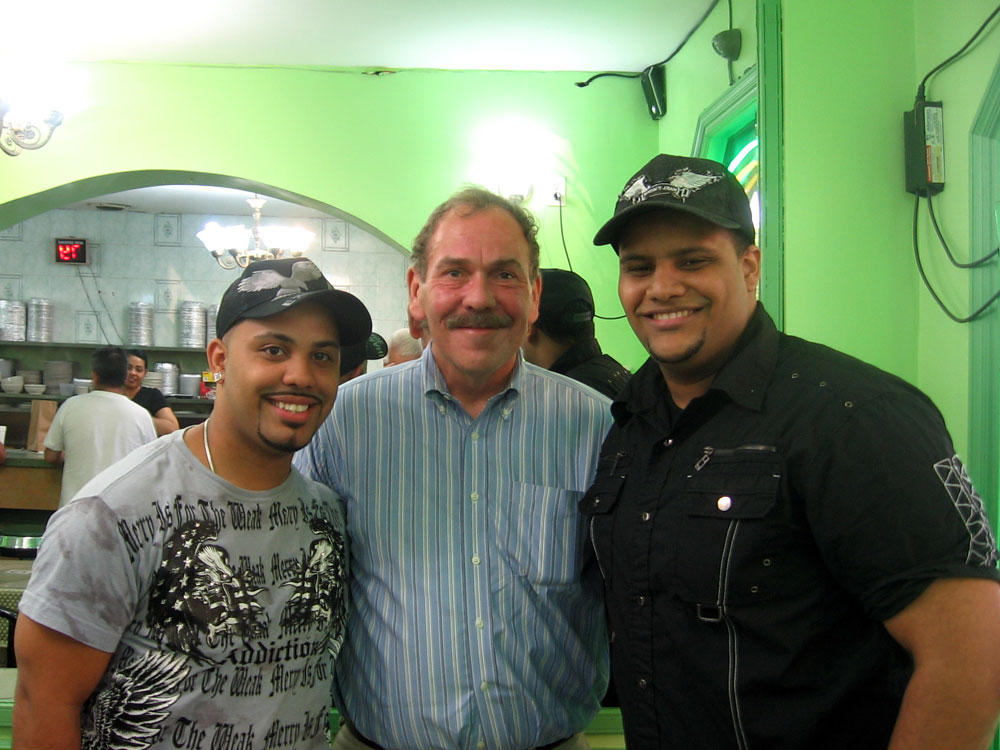 Today, the language of the streets is Spanish, and the people who live here are poorer and more isolated than Levine says he was.

"The story of the South Bronx is the story of a working-class neighborhood that became poor. And with that change, the American Dream died," Levine says.

A block away, the elevated subway train runs right down the middle of Jerome Avenue. Below the steel girders, a string of bodegas line the sidewalks where a Kosher deli and two Jewish-owned bakeries once thrived. In his youth, says Levine, this community was a nurturing, hopeful place that his parents saw as a stepping stone to a better life.

It turns out that the apartment Levine once lived in on Creston Avenue was later also home to Carlos.

Carlos, Juan Carlos and Leo, the central characters in Levine's book, kept brutally honest diaries, and those diaries gave voice to all that Levine wanted to denounce.

"My hope is that this book shows this community is isolated not by choice but by circumstance, and I hope that it shows that the community is a dangerous one to live in. It's hard to blame them for conditions like that," Levine says.

Unlike so many of Levine's books, Unequal Fortunes is not just about failed institutions and policies. It's more of a plea for readers to peer into poor children's harrowing lives and become advocates for what Levine calls a Schindler's List kind of change -- maybe not to save all children but to rescue as many as possible.