Accessibility links
France Moves Ahead With Nuclear Waste Project France has finally settled on a place to put the nuclear waste from all of its power plants, even though the country is still uncomfortable with its dependence on nuclear reactors, which provide 80 percent of the nation's electricity. 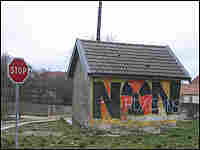 Anti-nuclear graffiti decorates a small building in Bure, a town that will likely be the site of France's nuclear waste burial site. David Kestenbaum/NPR hide caption 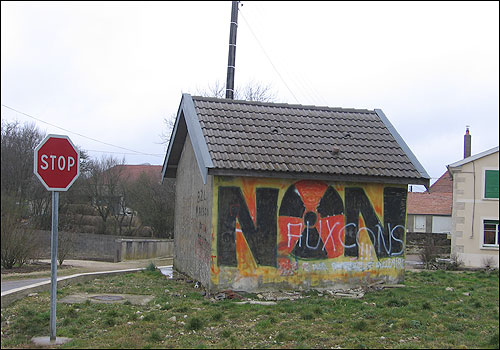 Anti-nuclear graffiti decorates a small building in Bure, a town that will likely be the site of France's nuclear waste burial site. 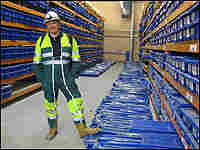 Eric Sutre is a geologist with ANDRA, the government agency that is studying the waste site. The blue boxes contain cylinders of rock drilled out of the earth. David Kestenbaum/NPR hide caption 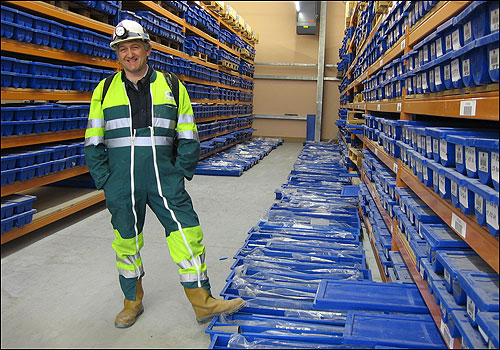 Eric Sutre is a geologist with ANDRA, the government agency that is studying the waste site. The blue boxes contain cylinders of rock drilled out of the earth. 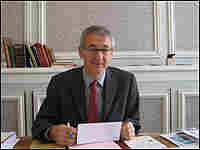 François Dosé a member of parliament representing the region, voted for a law to tighten the deadline for readying a nuclear waste site. David Kestenbaum/NPR hide caption 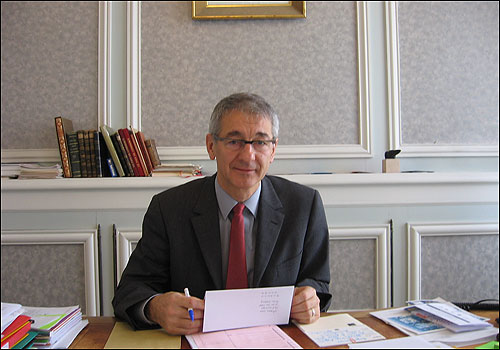 François Dosé a member of parliament representing the region, voted for a law to tighten the deadline for readying a nuclear waste site. 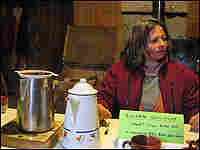 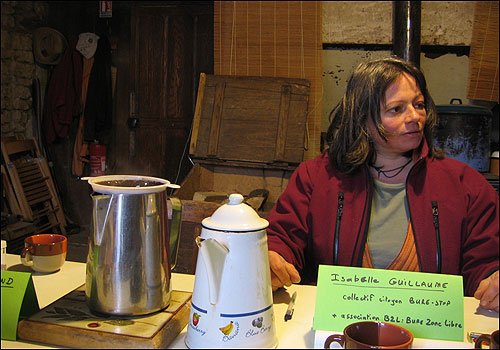 France is sometimes seen as a role model for combating climate change because 80 percent of its electricity comes from nuclear power. As a result, even the trains are largely carbon-free.

Essentially, it is nuclear-powered transportation. But one of the biggest problems with nuclear power is that it produces nuclear waste. And even in France, finding a place to put nuclear waste has been a messy affair.

The town of Bure is in eastern France, but it's not found on many maps. Here, you find cheese-makers and farms.

And it also has a mine shaft.

The mine shaft goes one-third of a mile down into a thick deposit of ancient clay that dates back to the dinosaurs. It is in this clay that France plans to bury its nuclear waste.

"We have two shafts," says Eric Sutre, a geologist at the mine. "One for the rescue..."

Sutre says clay is a good place to put nuclear waste because it seals things off. Water moves through the clay slowly — only a few feet in a million years.

The geological studies aren't finished yet, but the government is working hard to reassure residents that the project is being done properly. The place has a fancy visitors center with multimedia displays. Tourists come, but it's not like they're flocking to see the "Mona Lisa."

"Yes, it is not the Louvre, but for example, we have a special day each year when we open the site, and so last year we had 1,400 people coming here," Sutre says.

It is sometimes said that the French trust their engineers — that engineering is a point of national pride. But that doesn't mean people don't worry. When they come here, they ask questions like, 'What happens if there is an earthquake?'

"So we answer, 'There are very few earthquakes. And very little,'" Sutre says.

But here's the thing: No one really wants nuclear waste in their backyard. And in a democracy where everyone gets a say, people usually say no.

How did France pick Bure? It's been a long painful process, as anyone who has participated can say.

Ghislain de Marsily is a geologist at the University of Paris and a member of the French Academy of Science.

De Marsily says that when the French government began evaluating sites in the early 1980s, it did so in secret. This didn't go over very well.

"The names of the sites was kept secret," de Marsily says. "Even the reports did not mention the names. Site A, site B, and nobody knew where. It was a little bit unpleasant."

The government tried to reassure the public and argued that a waste site was of national importance. But there were protests, and in one case, armed police had to be sent in to a riot.

"Even the local farmers wanted to transform trucks into tanks to fight the police," de Marsily recalls. "It was really going to be a local revolution."

In the 1990s, the government looked for volunteer sites. At one location, farmers marched visiting officials out of town with pitchforks. The Côtes du Rhône region was on the list, but local winemakers objected. Scientists rejected another site.

Finally, last year the government seemed to lose patience. It passed a law setting a tight deadline for readying a waste site. And even though the government had pledged to choose from several sites, only one place had a lab doing the necessary research. It could also be ready in time. This place: Bure.

"Yes," de Marsily says. "There is no alternative. It's Bure."

The U.S. has a similar history. It began investigating multiple sites, yet that became expensive. Congress chose Yucca Mountain in Nevada. Locals called the legislation the "screw Nevada bill," and opposition has brought the effort to a near halt.

But from here, the French story takes a different path. In France, the local member of parliament, François Dosé, voted for the law that could send waste his way.

Dosé works out of an old castle. The ceilings look to be more than 20 feet high. He is welcoming and says many of his constituents seem to have accepted the project.

"In general, the people are a little afraid of the projects because the locals live on the earth and they don't like the idea of things being buried in it," Dosé says. "But in the local election, there was never any politicians against a project that was elected."

That could be because there is a sense in France that once the central government makes up its mind, there's not a lot locals can do.

Or it could have something to do with the money. They are getting a lot of it from the government. Dosé says the region has received 9 million euros — about $12 million — in the past decade. Some of that is spent on roads and schools.

"It's like Uncle Sam, so much money," Dosé says. "And in the coming 10 years it will be 20 million euros, and the villages are so small they don't even know how [they're] going to spend it. It's so much money!"

Dosé says he used to have doubts about the project, but he says independent scientists are now involved, which makes him feel better about the entire thing.

So has France solved the unsolvable? Found a place to put nuclear waste for a million years? Maybe.

There is an anti-nuclear movement in Bure. If you travel down the road a bit from the laboratory's visitors center you find another visitor center of sorts. A small stone farmhouse that is over 100 years old — and looks it — is the "house of resistance," set up by local activists.

Inside the farmhouse, a small dog named Rasta runs under the table. Isabelle Guillaume runs the place.

"The people are being told nonsense so they stay quiet, but the truth is that there is a great danger in burying nuclear waste, and there are scientists that have proved that," Guillaume says.

The opponents don't have fancy multimedia presentations, but they have a CD — of protest songs. Printed on it, in English, it says, "Stop Bure - Brothers & Sista." It's not reggae.

And the truth is that all of France, even though it gets most of its electricity from nuclear power, is still somewhat uncomfortable with it. In a poll by the European Union, only one out of five residents said they were in favor of nuclear power. One in three opposed it.

Nuclear power may be one solution to the problem of global warming, but it doesn't have a huge fan base, even in France.