Accessibility links
Taking The Sizzle Out Of Summer In The City As the East Coast bakes in triple-digit heat, you can bet it's even more stifling in the asphalt and concrete jungles of cities like New York and Washington than in nearby rural areas. So cities nationwide are increasingly turning to "cool" building materials to ease what's known as the urban heat island effect.

Taking The Sizzle Out Of Summer In The City

Taking The Sizzle Out Of Summer In The City 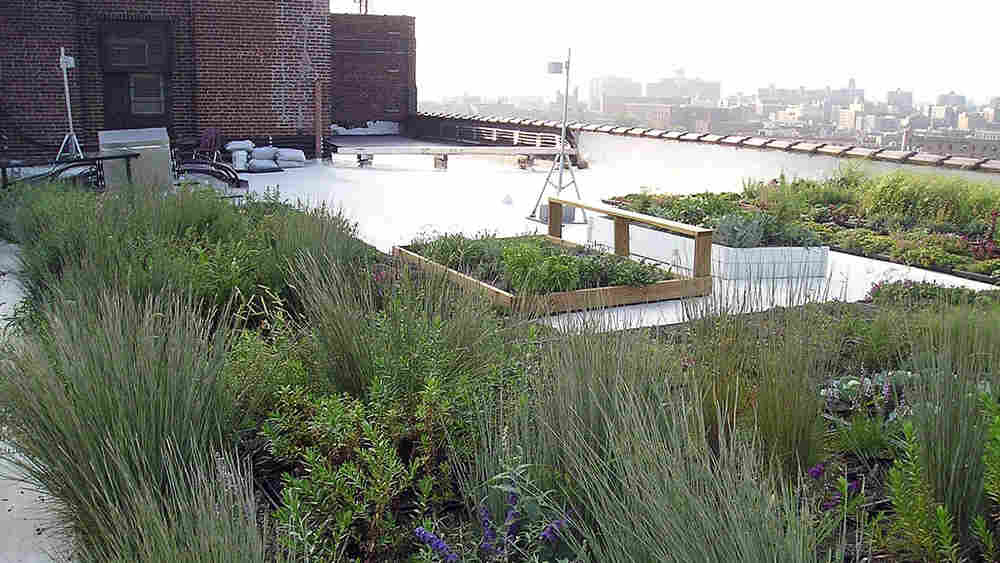 The EPA estimates that "cool" roofs, such as this one on the Bank Note building in the Bronx, N.Y., can cut air-conditioning costs by 10 percent to 15 percent. Courtesy of Sustainable South Bronx hide caption 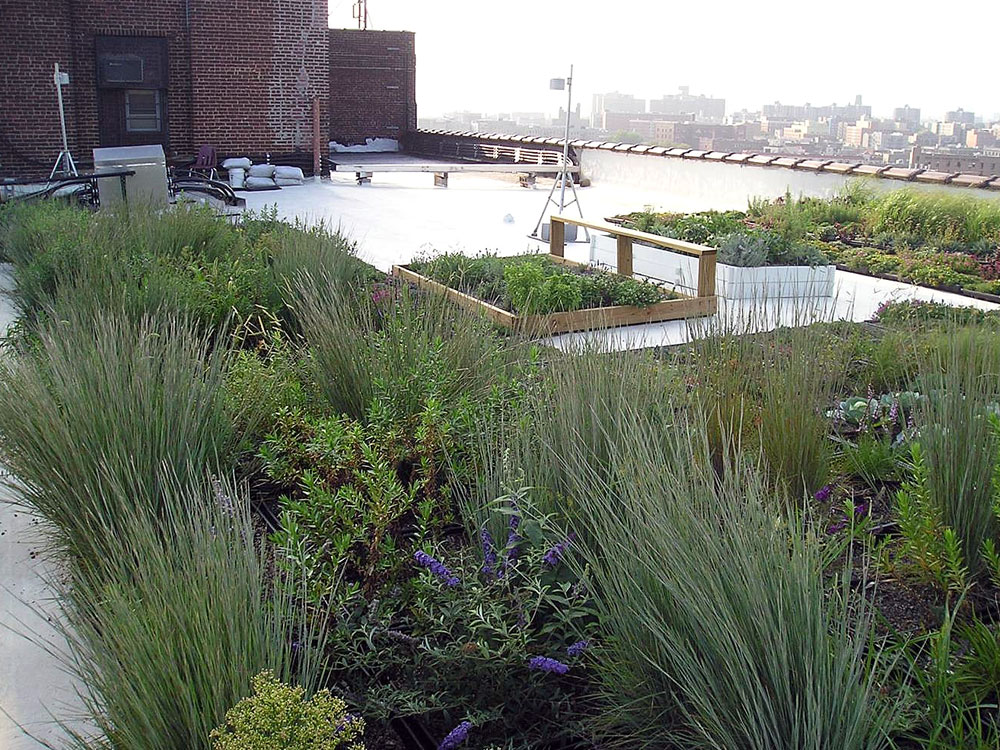 The EPA estimates that "cool" roofs, such as this one on the Bank Note building in the Bronx, N.Y., can cut air-conditioning costs by 10 percent to 15 percent.

As the mercury soared into the triple digits this week along the East Coast, you can bet it was even more stifling in the asphalt and concrete jungles of cities like New York and Washington than in nearby rural areas.

It's a phenomenon known as the "urban heat island" effect, and it's getting increased attention nationwide from planners, architects and building manufacturers searching for ways to cool sweltering cities, save energy and reduce greenhouse gas emissions.

The difference in the air temperature can be dramatic -- from about 5 degrees during the day to as much as 22 degrees at night as buildings release heat absorbed in daylight hours, according to the EPA.

On a traditional black roof on a summer day of 95 degrees, it can easily reach 170 degrees.

"In the last few days, for example, we've seen temperatures in downtown Baltimore that did not drop below 80 degrees at night, whereas it was in the 70s just outside the cities," says Bruce Sullivan, a National Weather Service forecaster based in Camp Springs, Md. "During the day, it's a smaller difference, but buildings heat up faster because they've retained heat from overnight."

The landscape of black asphalt streets and rooftops typical of urban areas is partly to blame. A dark roof can add 90 degrees to the ambient temperature on hot days. As a result, some cities are turning instead to light-colored "cool" roofs and "cool pavement" that reflect solar energy. Rooftop gardens, also known as "living roofs," are another option.

"On a traditional black roof on a summer day of 95 degrees, it can easily reach 170 degrees," says Anthony Ruffine, sustainability officer for GAF Materials Corp., which makes roofing materials. On the other hand, he says, a white roof made from a special polymer "would be more like 97 degrees."

That can translate to a 10 percent to 15 percent cut in air-conditioning costs, the EPA says. Less energy use would help ease the summer strain on local power grids, which have failed in parts of the East Coast this week as demand neared record levels.

"If all the cities in the hot and temperate parts of the world converted to cool roofs and cool pavement, 44 gigatons of carbon dioxide -- about one-and-a-half years' worth of current CO2 emissions -- could be offset," says Hashem Akbari, a researcher at Concordia University in Montreal and a member of the Heat Island Group at Lawrence Berkeley National Laboratory.

"Of the 10 largest cities in the U.S., over half are out of compliance for air quality," he says. "If you can improve air quality while saving energy costs, why not?" 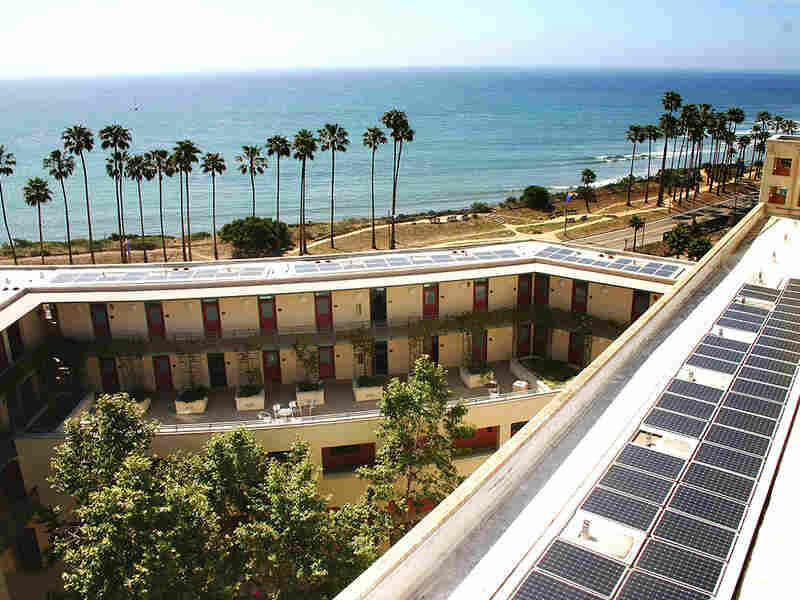 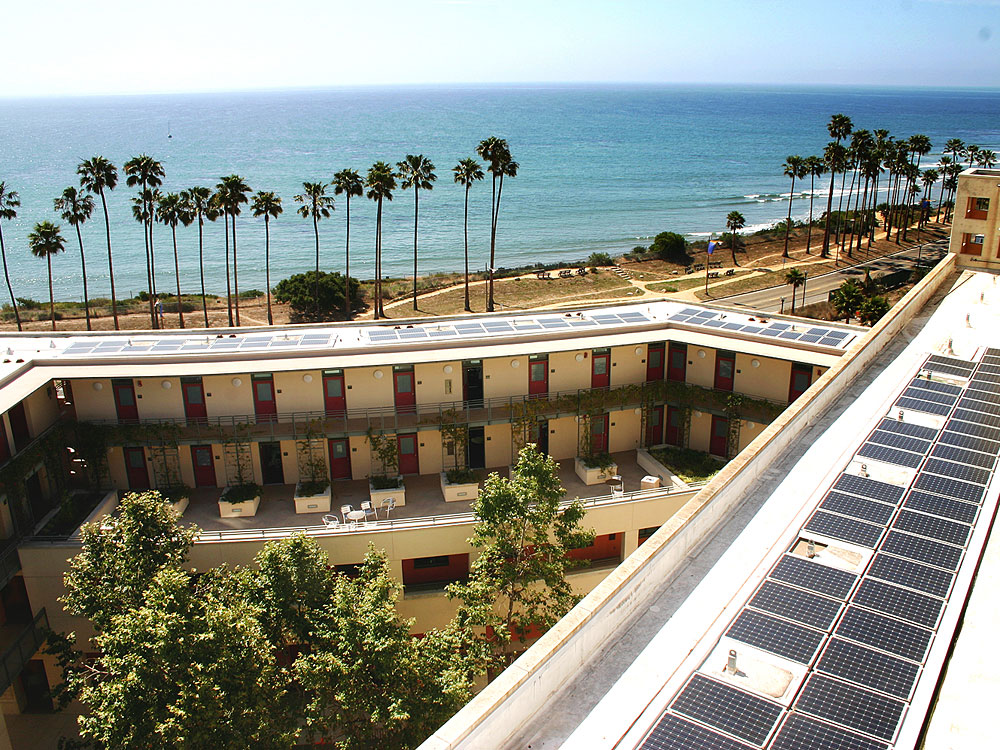 The roof of Bren Hall at the University of California-Santa Barbara is covered by a "white cap" sheet material broken up by an array of solar panels. The building was the first in the nation to receive two LEED Platinum certifications.

In Philadelphia, where a quarter of the surface area is roofs that are mostly black or brown, city officials passed a law in May requiring that new flat-roofed buildings install cool roofs and that new buildings bigger than 10,000 square feet meet the Silver standard under the U.S. Green Building Council's LEED rating system. Similar cool roofing mandates have been passed in South Carolina, Georgia, Louisiana, New Mexico and New York.

"Certainly, the heat wave we're in right now further emphasizes the importance of what we're trying to do," says Katherine Gajewski, Philadelphia's sustainability director. "What we're really interested in doing is looking at how we can make Philadelphia more resilient in the face of these kinds of climate events, which we expect to see more of in the future, and to make it more energy efficient in general."

City officials say they also are considering cool pavement, though most "green" efforts have focused on buildings -- where the most energy savings are to be had.

But some businesses balk at paying extra money to install greener materials.

Miquela Craytor, director of the nonprofit environmental group Sustainable South Bronx in New York, says it's difficult to change the short-term mindset of local businesses when it comes to greener buildings.

From their perspective, Craytor says, putting on a green roof that can cost $2,000 to $4,000 can be a hard sell. "We're trying to show them how that benefits them in the long term. Businesses and individuals really do want to do the right thing," she says.

Although some cool products can cost the same to install as traditional roofs, the higher-end options can be as much as 20 percent more expensive. The federal government offers modest tax credits of up to $1.80 per square foot for building owners, and 30 percent of the cost of the material, up to $1,500, for homeowners who install reflective roofs that qualify under the Energy Star program.

At Bren Hall on the campus of the University of California-Santa Barbara, the roof is covered by a "white cap" sheet material broken up by an array of solar panels. The building at the Donald Bren School of Environmental Science and Management was completed in 2002 and was the nation's first building to receive two LEED Platinum certifications.

University spokesman James Badham says that when the founding faculty considered the original plans for the building, they said, " 'Look, we should make this a green building.' So, they went back to the design and reworked it."

Bren Hall cost $26 million, and the overall "greening" added about 2 percent to the cost, Badham said. "It's a difficult number to nail down how much we've saved, but it's safe to say the building is quickly recovering the additional costs" for the certification, he said.

While cool roofs could increase heating costs in the winter, the extra expense would be more than offset by summer savings, according to the Cool Roof Rating Council, an industry group.

Tom Bollnow, senior director of technical services with the National Roofing Contractors Association, says higher wintertime costs would be minimal with a well-insulated roof. But he notes that problems can occur in colder regions because snow doesn't melt as quickly on a white roof.

"It can be a problem if you get unusual snow loads," Bollnow says. "But I think most people in northern climates would take that into account when deciding what kind of roof to install."

The heat island problem was first observed hundreds of years ago, and some European countries such as Germany have been using cool roofs for decades. In the U.S., the demand for cool materials has caught fire in the past five years, says Ruffine of GAF Materials.

"I think that a lot of cities and municipalities are starting to think this way," says Gajewski in Philadelphia. "When we look at our country at large, I think this is a slow shift. Consciousness is being changed, but it's not going to happen overnight."