Accessibility links
Obama, Holder Catch Heat For Close Ties President Obama and Attorney General Eric Holder have a lot in common, so it's no surprise they socialize outside the office. But the distance between the White House and the Justice Department has long been a touchy subject, and the Obama-Holder relationship is beginning to attract criticism. 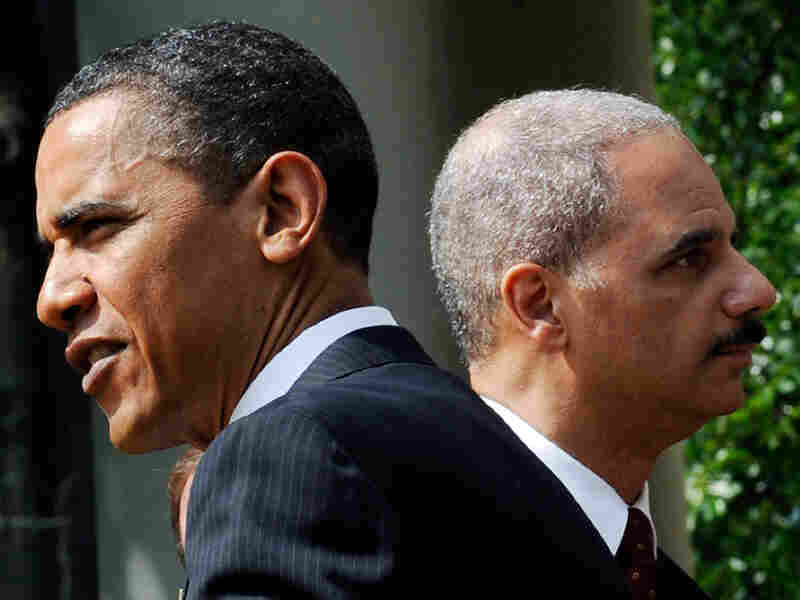 President Obama and Attorney General Eric Holder in the Rose Garden of the White House in Washington on May 14. Their close relationship has sparked concerns about the distance between the White House and the Justice Department. Susan Walsh/AP hide caption 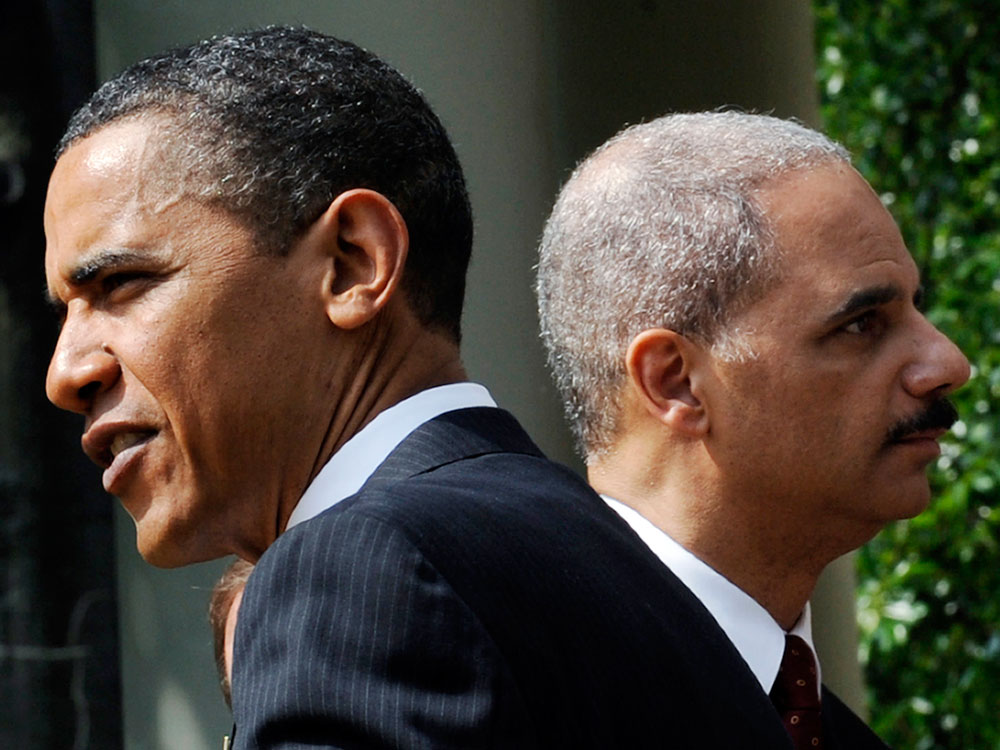 President Obama and Attorney General Eric Holder in the Rose Garden of the White House in Washington on May 14. Their close relationship has sparked concerns about the distance between the White House and the Justice Department.

President Obama and Attorney General Eric Holder have a lot in common. They're lawyers. They married career women. And their children are about the same age. So it's no surprise they socialize outside the office.

But their well-known relationship is beginning to attract criticism and complications.

At his confirmation hearing last year, Holder promised that he would pay special attention to the attorney general's unique role.

Holder grew close to Obama during the campaign, when he helped select the vice presidential candidate. Since then, their families have shared dinners, celebrated the first lady's birthday and occupied the same box at the Kennedy Center.

The tight relationship between an attorney general and his president isn't unprecedented.

President Kennedy picked his brother Bobby to be the nation's top law enforcement officer. And close ties between President Bush and his attorney general, Alberto Gonzales, fueled accusations that the Justice Department had become too political.

Holder came into office vowing to change that dynamic.

Robert Raben, who worked in the Justice Department during the Clinton years, says the distance between the White House and the department has always been a touchy subject.

"The relationship is formed in one of politics and sometimes friendship," Raben said. "And then immediately upon confirmation, it's important that there be structural and actual separation of power and decision-making. Obviously, one of the fascinating pieces of the relationship is the weaning."

Washington lawyers say it's naive to think there can be a complete break between the Justice Department and the White House.

"The Justice Department is never going to be fully independent of the White House. It's an executive branch agency, and all the senior-level officials there serve at the pleasure of the president," said Robert Driscoll, a Republican who served in the Bush administration.

Just how close Holder's Justice Department and Obama's White House have become is the subject of speculation.

Lawyers in and outside the department say the White House sometimes knows days or weeks ahead of time when controversial cases will be filed.

And White House lawyers have reviewed some court briefs on health care and gay rights.

Other White House officials have tried to delay announcements of Justice Department moves that might prove politically distracting during the long fight over health care legislation in Congress.

This week, Republican senators flagged White House rhetoric on the controversial Arizona immigration law that they say was designed to influence the Justice Department case.

Driscoll, who's involved in the issue because he defends an Arizona sheriff accused of going too far against illegal immigrants, raised similar questions.

The Justice Department's investigation of BP for its role in the Gulf oil spill is also coming under fire.

Such investigations are usually kept under wraps because of ethics rules. But Holder took the rare step of announcing he had launched a probe of BP at a time when polls said the administration wasn't doing enough about the gusher.

At a recent news conference in Louisiana, as the cameras clicked, Holder said, "If we find evidence of illegal behavior, we will be extremely forceful in our response."

But Holder makes no apologies about the probe -- or for attending a White House meeting about financial concessions from BP, even though his department is exploring possible criminal charges against the company.

Perhaps the most sensitive issue between the White House and Justice is where to try the five men accused of igniting the Sept. 11 attacks.

Holder decided last year that the men should go to New York for a civilian trial. But the White House reversed the decision. And it hasn't announced a new venue. The attorney general recently denied reports that political sensitivity was adding to the delay.

"No decision has been made with regard to where the trials will be held, but the conversations that we are having are ongoing and ... the fact of the elections is not a part of the conversations at all," he said.

A Gentle Tug Of War

The White House says the contacts are appropriate and that it respects the Justice Department's boundaries.

"It is perfectly appropriate for the White House and the Justice Department to work together on national security issues or matters like ensuring BP lives up to its legal obligations to compensate Americans affected by the oil spill, and we have every intention of continuing to do so in a cooperative fashion," White House spokesman Ben LaBolt said in an e-mail message.

The Justice Department says it controls the timing on law enforcement cases. Sometimes, a Justice spokesman said, the department consults with the White House before telling judges about an Obama administration policy on a particular issue, but that, he said, is customary.

The gentle tug of war could remain gentle for some time.

Two factors could shake up the relationship, though.

The first is if Republicans take over the U.S. House in November's elections, touching off more congressional oversight.

And the second is if a Cabinet official or a White House staffer becomes the target of a Justice Department investigation.

For now, Raben has a word of advice for the president and his occasional dinner partner, Holder.

"I think it's crucial that they always get separate checks," Raben said.