Accessibility links
LeBron James, Miami-Bound, Breaks Hearts In Cleveland LeBron James announced last night on ESPN that he's heading to Miami, where it's undoubtedly a bit sunnier today. But in Cleveland, where he played for seven years, there is a new layer of bitterness in a place where sports and hard luck have gone together for many years. 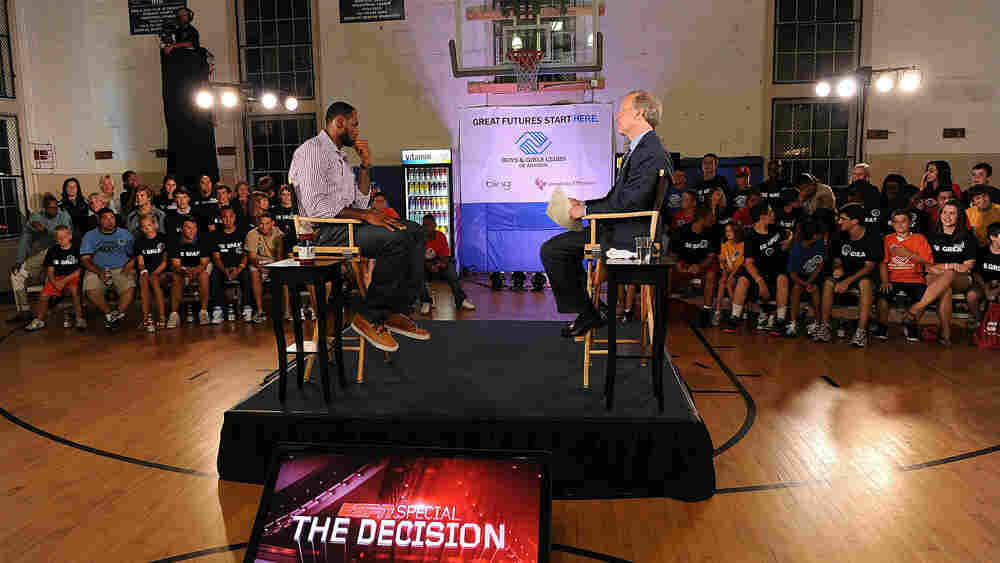 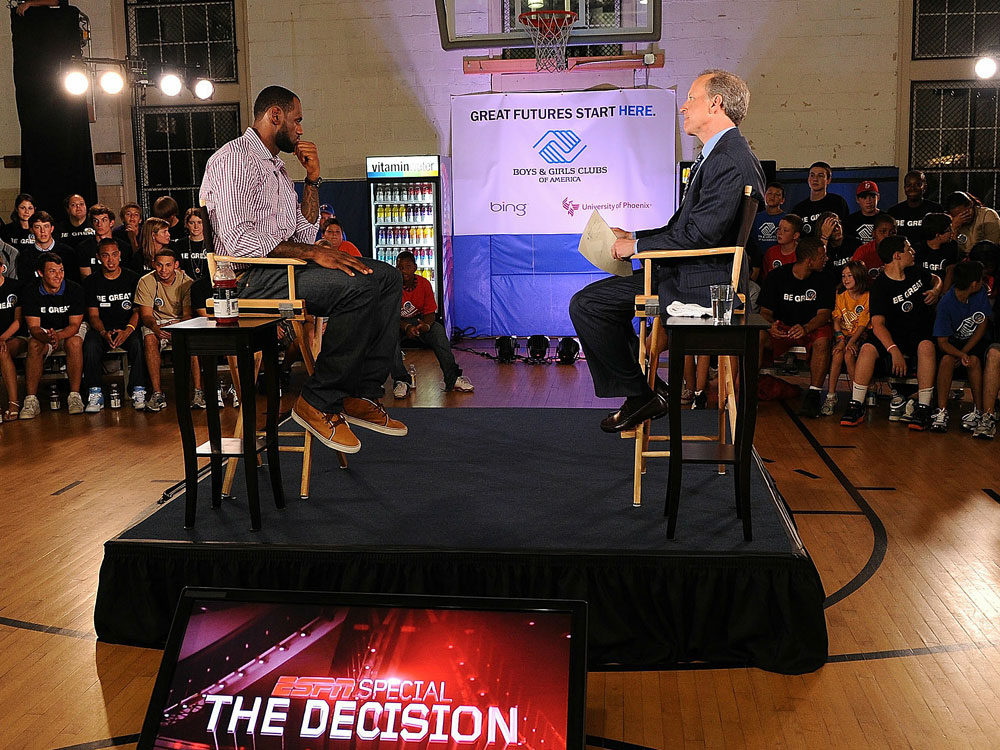 LeBron James announces his decision during a primetime special hosted by ESPN's Jim Gray on Thursday night at the Boys & Girls Club of America in Greenwich, Conn. 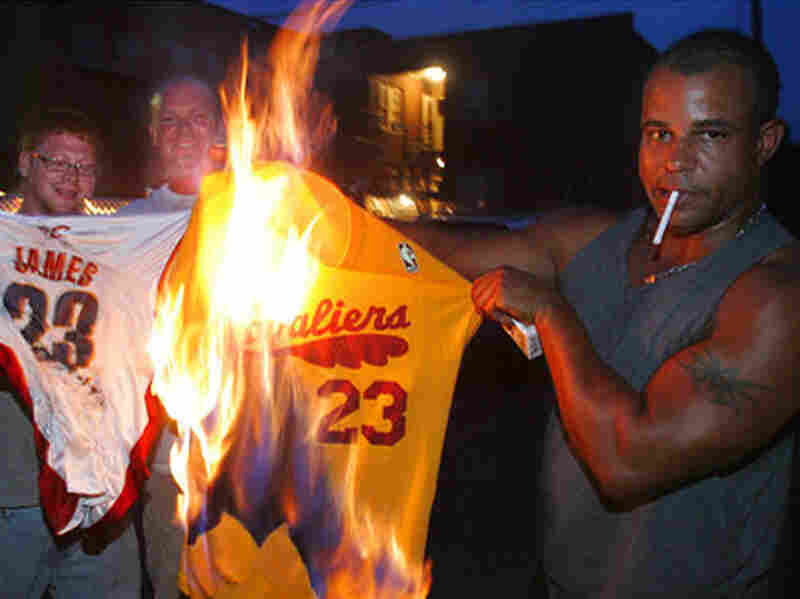 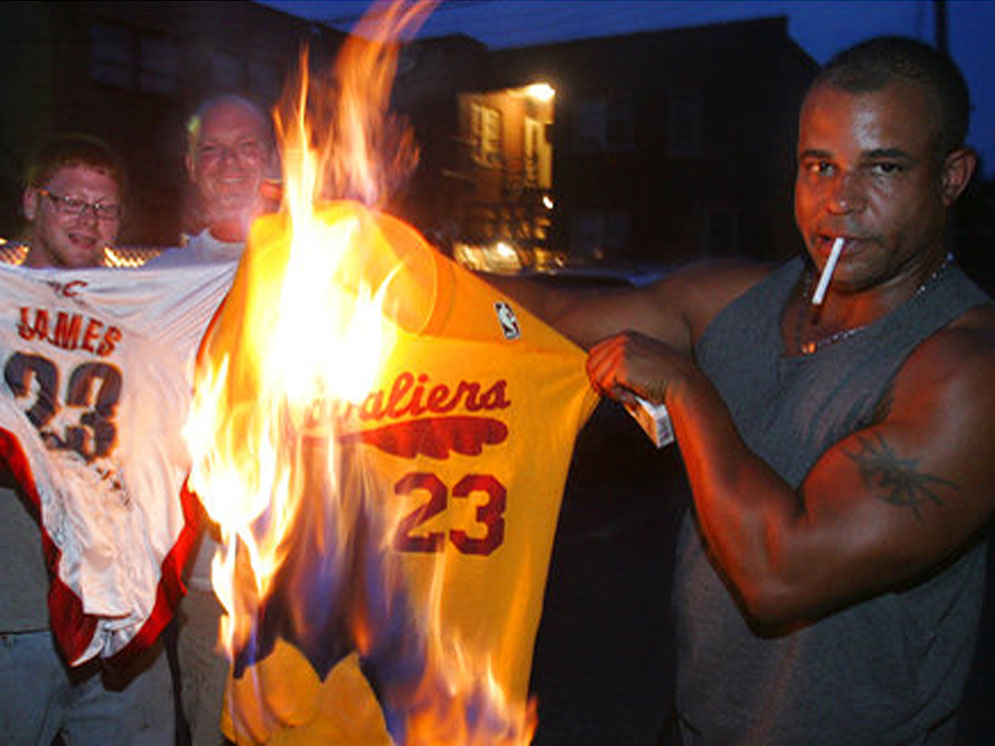 In the end, it took all of 11 seconds, but the fallout in two American cities may last for years.

The reaction in both cities has been seismic.

Miami is a bit sunnier today if that's even possible, while in Cleveland, where James played for seven years, there is a new layer of bitterness in a place where sports and hard luck have gone together for many years.

James, Wade and Bosh all structured their contracts so they'd be free agents at the same time. Speculation and rumor by sports reporters over which team would score the NBA's most coveted free agent drove sports fans delirious with anticipation.

"LeBron? What's your decision," the ESPN announcer said after what seemed like endless delay.

"This fall — man, this is very tough — this fall, I'm going to take my talents to South Beach and join the Miami Heat."

Answer in hand, the questions began: LeBron, why Miami?

"I felt like this is going to give me the best opportunity to win and to win for multiple years. I want to be able to win championships and I feel like I can compete down there."

Cleveland — a city that last won a major professional sports championship in 1964, a city whose sports failures are cataloged in one-word descriptions like The Drive, The Fumble, The Shot — now has The Decision.

For the hundreds of people watching at Harry Buffalo, a bar right next to the Cleveland Cavaliers' home arena, the night was over as soon as James uttered the words that chilled them to the core: "South Beach."

"I feel like my heart's been ripped out, stomped on and everything," said Stephanie Ramos, who was near tears. "I can't even believe that he couldn't be loyal and try to win a … I feel like 10 championships there wouldn't equal to one that he could've gotten here."

During his post-decision interview, James — who has the word "loyalty" tattooed on his chest — watched a video of a Clevelander burning his Cavaliers jersey. "I can't get involved in that," he responded. But James said he gave the franchise everything in his seven years there and understands the pain his decision is causing.

"I feel awful that I’m leaving. I feel even worse that I wasn't able to bring an NBA championship to that city because I know they've been wanting it a long time," he said. "To my real fans out there, I hope you guys continue to support me all the way in Miami, and I guess I’ll see you guys, you know, this fall."

It's bound to be an icy welcome when Miami visits Cleveland — and not just from fans.

On the Cavaliers' website, Cavaliers owner Dan Gilbert wrote a blistering open letter in which he called James' decision a cowardly betrayal and a shameful display of selfishness by one of our own. Gilbert also personally guaranteed that Cleveland will win an NBA title before the "self-declared former 'King'" wins one.

Considering how the Cavs' heart and soul has been transplanted to Miami and how the Heat now have to be part of any championship conversation, Gilbert and his team are going to need a lot more than angry words.