Accessibility links
Shrinking Coast, Expanding Oil: Shrimpers Clean Spill A family of Louisiana shrimpers has seen their coastline disappear over the years, accelerated by the ever-expanding oil industry. Now, the Chauvins are working for BP to clean up the oil spill that has further threatened the family's lifeline.

First in an occasional series.

A shrimp boat prepares to lower its booms into the Gulf of Mexico on May 5. In the days following the Deepwater Horizon explosion, a BP representative approached fourth-generation shrimper David Chauvin to assemble a team to help with cleanup efforts. Matt Stamey/The Houma Courier hide caption

The giant oil spill in the Gulf of Mexico is dealing a harsh blow to communities all along the coast -- threatening wildlife, fisheries and tourism in parts of all five Gulf states.

But the disaster is particularly alarming for people who live on the fragile edge of Louisiana. For decades, they've been in a battle to save a sinking land.

Now, the latest threat is forcing a family of Cajun shrimpers to adapt. 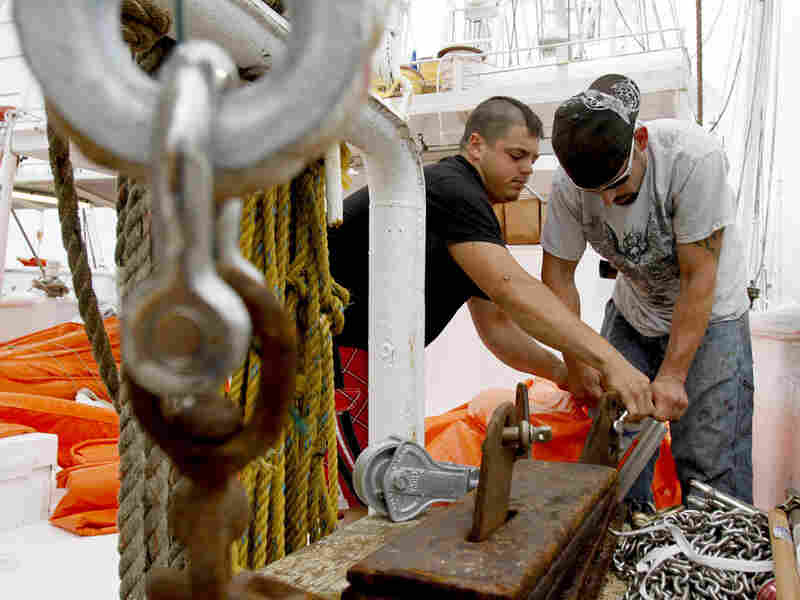 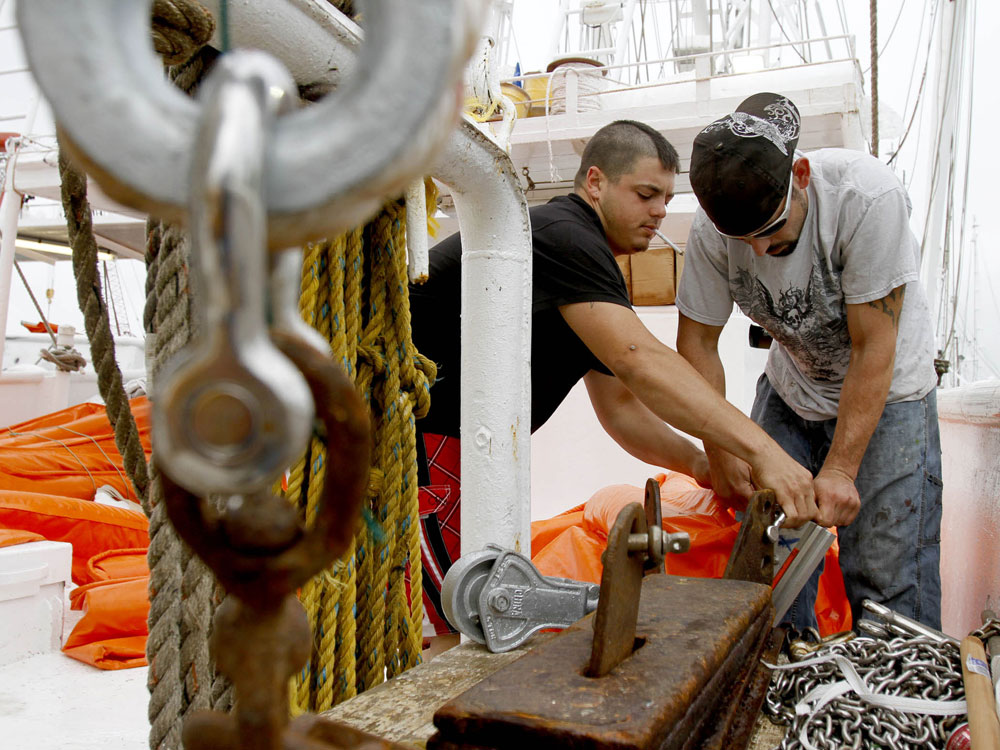 David Chauvin Jr. (left) and Todd Lyons work to secure a section of boom to a skid that's normally used for shrimp nets on May 3.

From Pulling Trawls To Oil Booms

David Chauvin reminds his wife, Kim, to pick up some extra life jackets as she's rushing out the kitchen door to attend a BP safety meeting. Instead of selling shrimp from the dock behind their house, the former high school sweethearts are now running a fleet of 25 shrimp boats that have been converted to skimmers.

"One year you go from pulling trawls to oil booms," David Chauvin says. "I went from carrying, delivering shrimp around to now I deliver personnel and supplies for BP around."

The Chauvins live in their namesake -- Chauvin, La. -- a small stretch of dry land just off Lake Boudreaux in Terrebonne Parish. They own the Mariah Jade Shrimp Co. and have three large shrimping vessels, built by David Chauvin and his father, Anthony Chauvin. The boats are named after David and Kim Chauvin's three children.

"Mariah, we've been bringing her aboard the Mariah Jade since she was a baby," David Chauvin says. "My wife and my daughter and my two sons, they would come with me all summer long."

The sons, who used to splash around as toddlers in the boat's saltwater tanks, now captain two of the shrimp trawlers. And 14-year-old Mariah helps her mom manage the loading dock out back where other local fishermen bring their harvest.

Shrimping has been a family affair for the Chauvins for five generations. David Chauvin's great-grandfather, Cap Chauvin, was doing it long before oil was discovered off the Louisiana coast.

Today, oil rigs are as common as shrimp trawlers. David Chauvin says he never realized how devastating a spill could be. It came into focus those first days after the Deepwater Horizon exploded, when he was approached by a representative from BP. 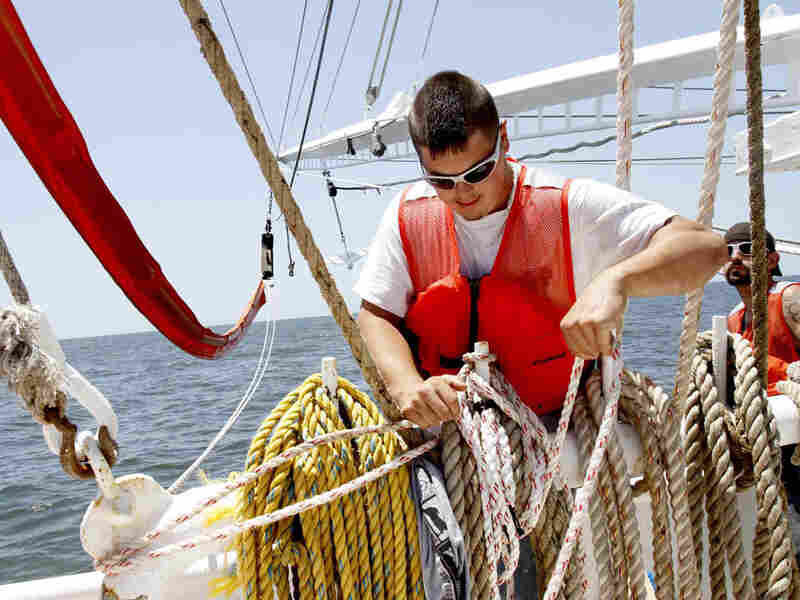 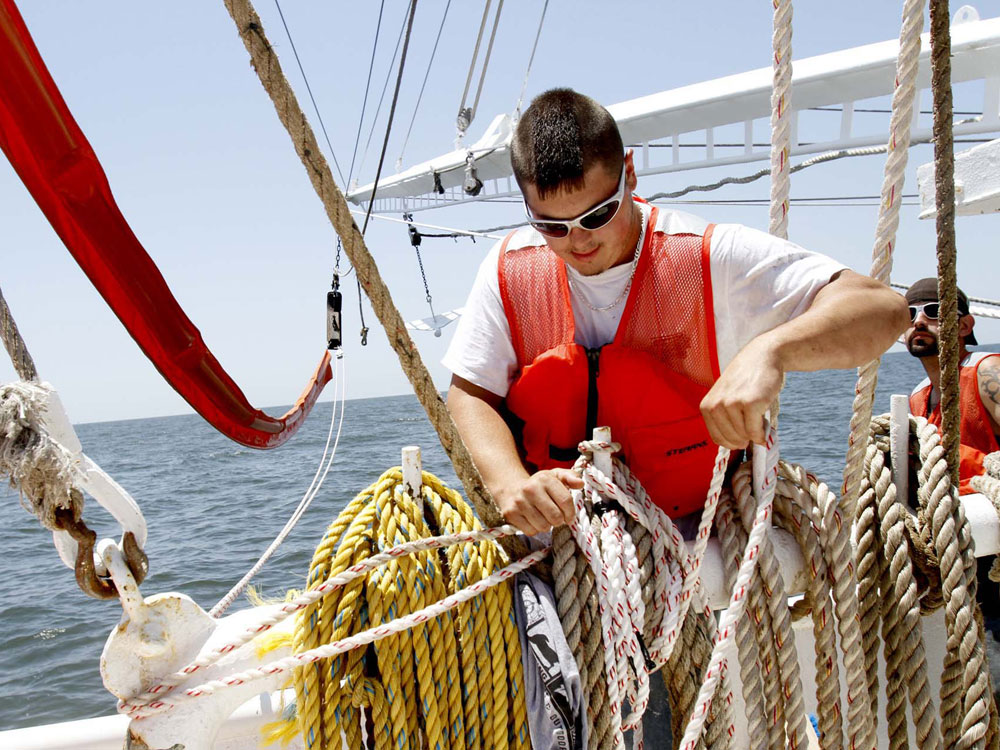 David Chauvin Jr. lowers the oil boom while testing out the rigging.

"This thing was actually still burning offshore. And he explained to me the situation. How they had never had this happen in this amount of water, and trying to fix this problem is probably just as bad as trying to fix it on the moon," he says. "So my heart sank in my chest, and I'm thinking, 'OK, how bad is this gonna be?/"

The man wanted David Chauvin to assemble a team of shrimpers to help with the cleanup. It was the start of the shrimp season, he says, and a hard decision to make.

"So I said, 'I'll tell you what,' I said, 'let me pray on it, let me sleep on it, and I'll get back with you first thing in the morning,'" David Chauvin says.

That night he couldn’t sleep. But for his 21-year-old son, David Chauvin Jr., the decision was clear: "Well, I mean, it was either go shrimping or go save a coastline."

That coastline was already in peril. Louisiana loses 100 yards of land every 15 minutes -- nearly 25 square miles a year. In his 20 years of fishing the Gulf, David Chauvin Sr. says he's seen the land vanish and saltwater waves wash farther and farther inland, killing off trees and vegetation.

"There are places that we fish and drag the nets now, you can hang the nets, and tear the nets and those are actually oak trees where there was land at one time," he says.

The disappearing coast is a field of study for Alex Kolker, an assistant professor at Louisiana Universities Marine Consortium.

"The story is this area is, it's sinking and of course, you know, some of this wetland loss is part of the natural delta cycle," Kolker says of the marsh lands in Cocodrie, just south of Chauvin. "You should have areas of natural growth and decay. The problem is, we've accelerated the decay and cut off the growth."

The growth has been cut off with levees and navigation channels that choke off the sediment that would naturally flow from the Mississippi River to feed the marsh. The decay has been accelerated by carving up wetlands for industrial purposes, including oil and gas exploration. The result is broken-up patches of marsh, dotting what is now open water.

Projected Land Loss For The Louisana Coast From 2000 To 2050

Kolker says Louisiana has lost nearly 20 percent of the wetlands of the Mississippi Delta over the last century -- some 2,000 square miles.

"The scale of the wetland loss here is tremendous," he says.

Coastal activists say if there's anything good to come from the BP oil spill, it's that restoring Louisiana's coast now appears to be on the national agenda. They believe they finally have an advocate in the White House now, 50 years after scientists first realized how fast Louisiana's coast was disappearing.

Still, there are competing ideas about what coastal restoration would look like. For instance, should efforts focus on putting back what has been lost or simply stopping the decline? And now there are fears the oil washing ashore will only accelerate the problem.

That would be the scariest part out of all of this, that shrimping as we know it would be over with.

The Cost Of The Spill: A 'Heritage'?

For the Chauvins, the problem is more immediate.

"This oil is a ... tragic thing, I ain't gonna lie. This is the only way of life that me and my brother, my daddy, my papaw, his daddy, we all knew," David Chauvin Jr. says. "This is all I knew: engines, trawls, everything you could put on a boat."

He quit school in seventh grade to start working on a boat. The only time he didn't shrimp was a two-year stretch he spent working the offshore oil fields.

Now, he's trawling for oil, trying his best to save what he knows.

The well blew on April 20, and by the end of that month, the Chauvins were running task force one in what would develop into BP's Vessels of Opportunity Program, using local fleets to fight the oil.

David Chauvin Sr. says it's been good to have that work, but he's wondering what will become of the shrimp and his family's future.

"That would be the scariest part out of all of this, that shrimping as we know it would be over with," he says. "The whole problem with all of this is just so not fair, you know, that because just a few people didn't do their job correctly that it could cost me my heritage."

This story was produced for broadcast by Evie Stone.