Accessibility links
A Fitful Dream: European Unity Shaken By New Woes The European Union, a vision born after the devastation of World War II to unify the continent, has been rocked by the economic downturn, the debt crisis, rising nationalism and difficult issues like immigration. Can the 27-nation EU find a new sense of mission? 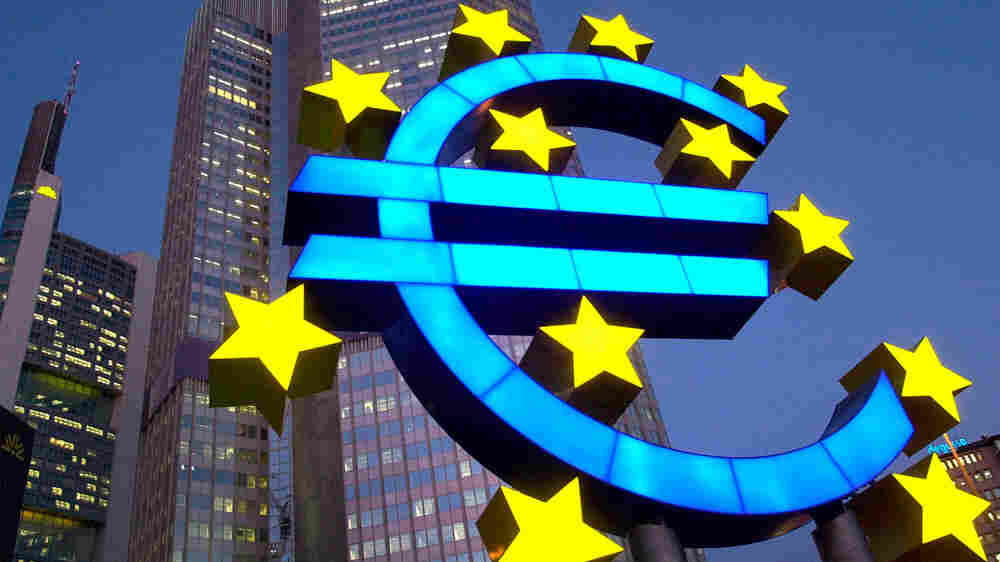 Five decades after the idea was born in the aftermath of World War II, the European Union is being tested by 21st century challenges. Above, the Euro monument is illuminated in front of the European Central Bank in downtown Frankfurt, Germany. Bernd Kammerer/AP hide caption 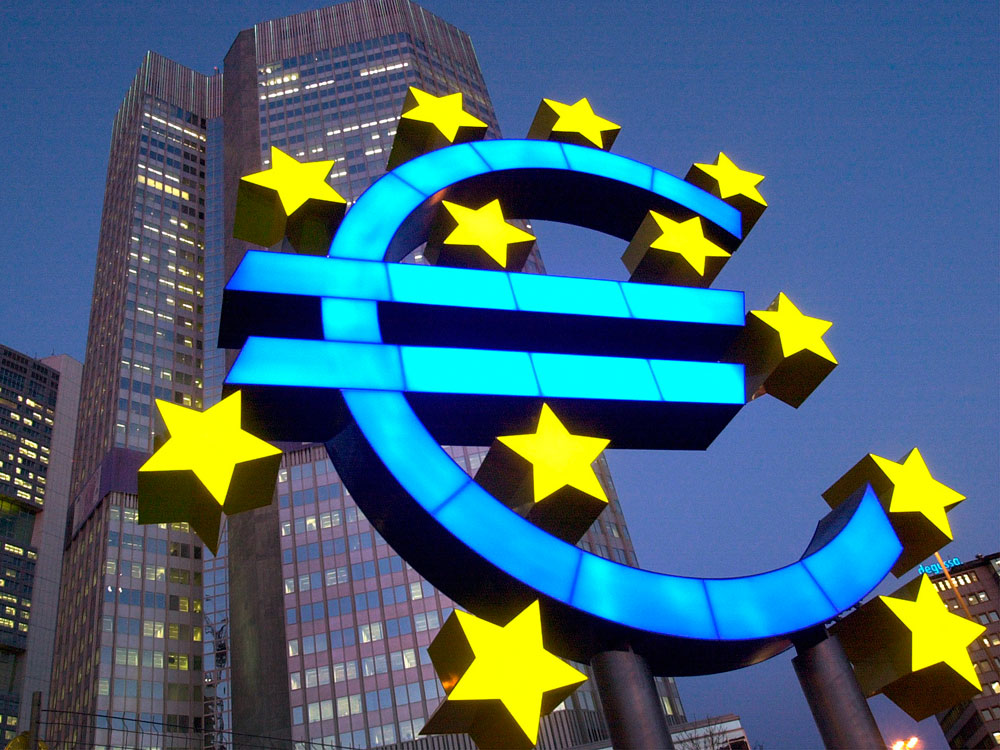 Five decades after the idea was born in the aftermath of World War II, the European Union is being tested by 21st century challenges. Above, the Euro monument is illuminated in front of the European Central Bank in downtown Frankfurt, Germany.

At age 53, the European Union is in the grips of a midlife crisis.

The euro -- the single currency shared by 16 nations -- has been shaken by the global economic downturn and the lack of a joint, enforceable monetary policy.

The EU social model, based on various versions of the welfare state, has been eroded by national debt and budget-cutting austerity measures. And a newly assertive Germany is causing anxiety among its union partners.

In Brussels, glass and steel buildings house the EU central command. With the burgeoning Eurocrat workforce at 45,000, more high-rise offices are under construction. In the European Union capital, there is no sense of crisis.

But among the 27 EU member nations (only 16 opted into the single-currency monetary union), angst is growing over the future of the postwar effort to unite Europe.

'Pax Europea' From The Ashes Of War

Street names in Brussels honor Robert Schuman and Jean Monnet, the postwar leaders who strove to rebuild Europe on the ruins of World War II, the most devastating war in human history.

The dream of a united Europe started in 1950 as longtime enemies France and Germany agreed to pool their war-making industries -- coal and steel. Four more countries -- Belgium, Italy, Luxembourg and the Netherlands -- soon signed on.

Former Belgian Premier Mark Eyskens says it was "not only a stroke of genius, it was a miracle." The European Coal and Steel Community, he says, was an effort to overcome Europe's dark, bloody past.

"To construct the reconciliation between Germany and France -- no longer peace treaties, these were just pieces of paper without any impact. But we started to integrate the economies, and that brought about, indeed, the Pax Europea," Eyskens says.

The horrors of World War II were still vivid: mass extermination in Nazi death camps, some 30 million Europeans dead, as many millions expelled, deported and transplanted.

To build a Pax Europea, says former Italian diplomat Sergio Romano, collective amnesia was essential: "It was obvious that you had to close as rapidly as possible the chapter on responsibilities and move on." 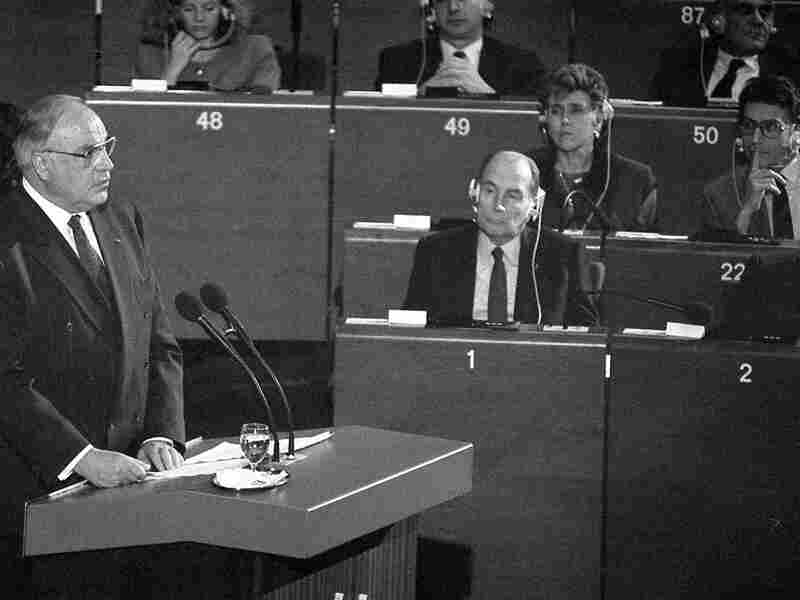 West German Chancellor Helmut Kohl speaks to the European Parliament in Strasbourg, France, in November 1989. The prospect of a reunited Germany -- and resurgent German nationalism -- after the fall of the Berlin Wall stirred anxiety and suspicion in Europe. Winfried Rothermel/AP hide caption 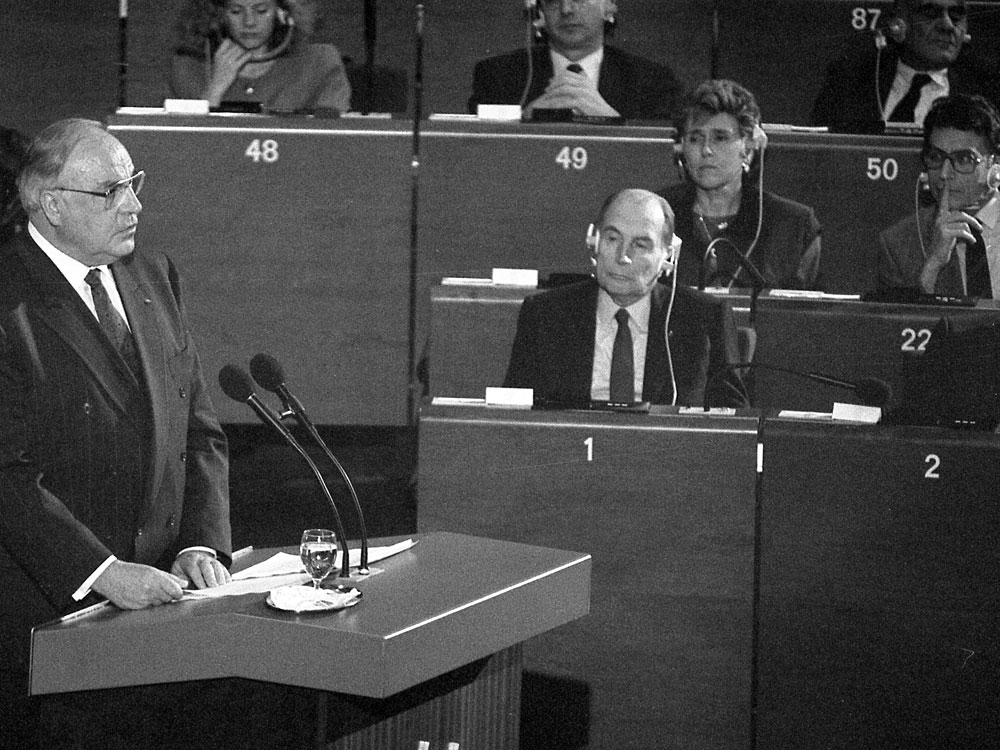 West German Chancellor Helmut Kohl speaks to the European Parliament in Strasbourg, France, in November 1989. The prospect of a reunited Germany -- and resurgent German nationalism -- after the fall of the Berlin Wall stirred anxiety and suspicion in Europe.

Ghosts Of The Past Re-Emerge

In the span of a single generation, Western Europe enjoyed an unprecedented boom.

With the past swept under the rug and NATO providing security, the new "European social model" could compete with the "American way of life."

But with the fall of the Berlin Wall and the collapse of communism in Eastern Europe, ghosts of the past re-emerged.

At a late 1989 summit chaired by then-French President Francois Mitterrand, the prospect of a reunited Germany stirred anxiety and suspicion.

"The atmosphere was extremely disturbing and even shocking," Eyskens remembers.

He was sitting between British Prime Minister Margaret Thatcher and German Chancellor Helmut Kohl. Eyskens recalls that Thatcher scolded Mitterrand for a draft communique on the reunification of all German-speaking peoples -- an ominous echo of Hitler's aspirations.

"I saw Helmut Kohl shattering, and he became extremely furious, and he said, 'I swear I will always defend a European Germany and never defend a German Europe.' It was an historical phrase he repeated several times," Eyskens says.

The group consented to German reunification on the condition that Germany abandon its beloved deutsche mark and join a single currency. But the agreement came with terms dictated by Germany -- strict regulations to keep monetary policies tight and deficits small.

The Maastricht treaty in the 1990s paved the way for the European Union and a single currency, and encouraged closer cooperation on social policy, foreign affairs and immigration. 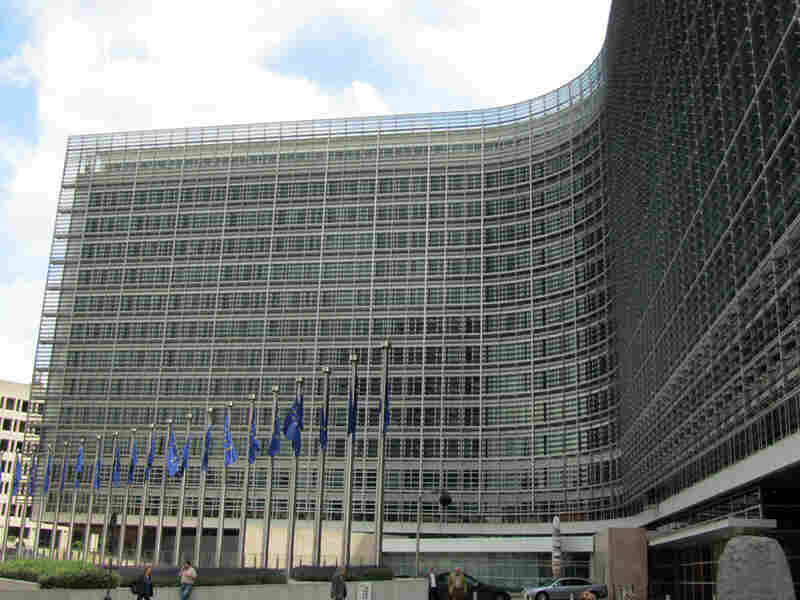 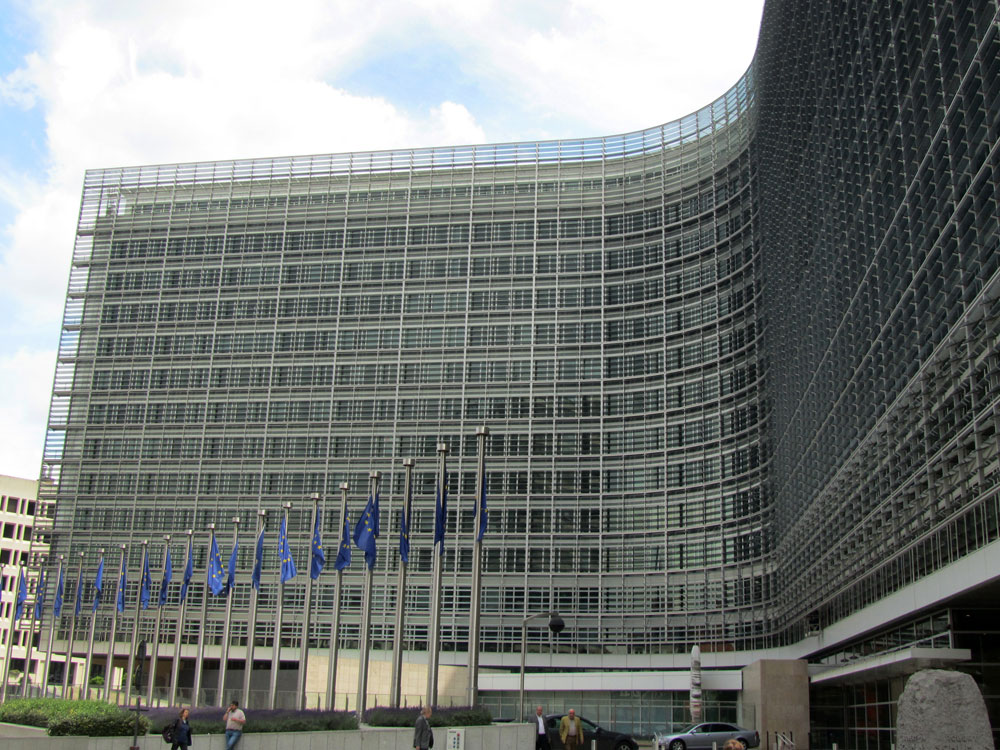 The euro, as the currency was named, was a political rather than economic creation -- the result of Europeans' fear of resurgent German nationalism and Germans' obsessive fear of inflation.

But it's a currency without common fiscal and economic guidance.

Its basic shortcoming -- as in most European Union policies -- is member states' unwillingness to give up their cherished national sovereignty. EU members have been unable to forge a joint policy on issues such as immigration and foreign affairs.

National sovereignty is a concept set in stone in the 1648 peace treaty that established the nation-state, former EU Commission President Romano Prodi says, with a touch of resignation.

"It is the dominating thinking since the Westphalia treaty. How can you change so many centuries of history in one shot?" he asks.

In fact, the EU has its own bureaucracy and parliament, controlling its own budget and passing EU-wide laws. But real power still lies with each member state.

And it is without a common strategy that the EU is facing the challenges of the 21st century: EU expansion, globalization and immigration from outside Europe.

The end of the Cold War brought many former Soviet satellites -- Poland, Romania and the Czech Republic, among others -- into the EU and was celebrated as the healing of a once-divided continent.

But the expansion also opened up borders to cheap labor, making fear of the "Polish plumber" in Western Europe the mantra of anti-EU forces. 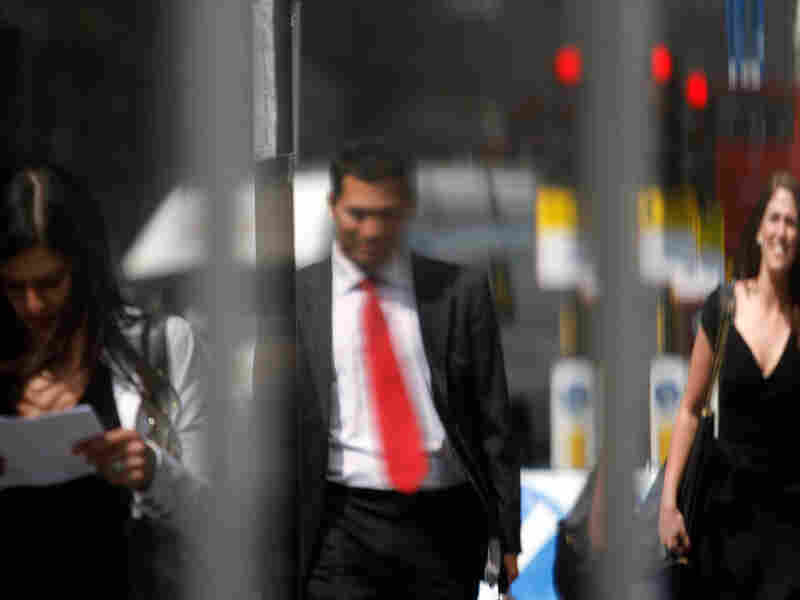 People are reflected on a window as they walk in London's financial district in May. World stock markets and the euro tumbled in May and June on fears that Europe's debt crisis would spread. Lefteris Pitarakis/AP hide caption 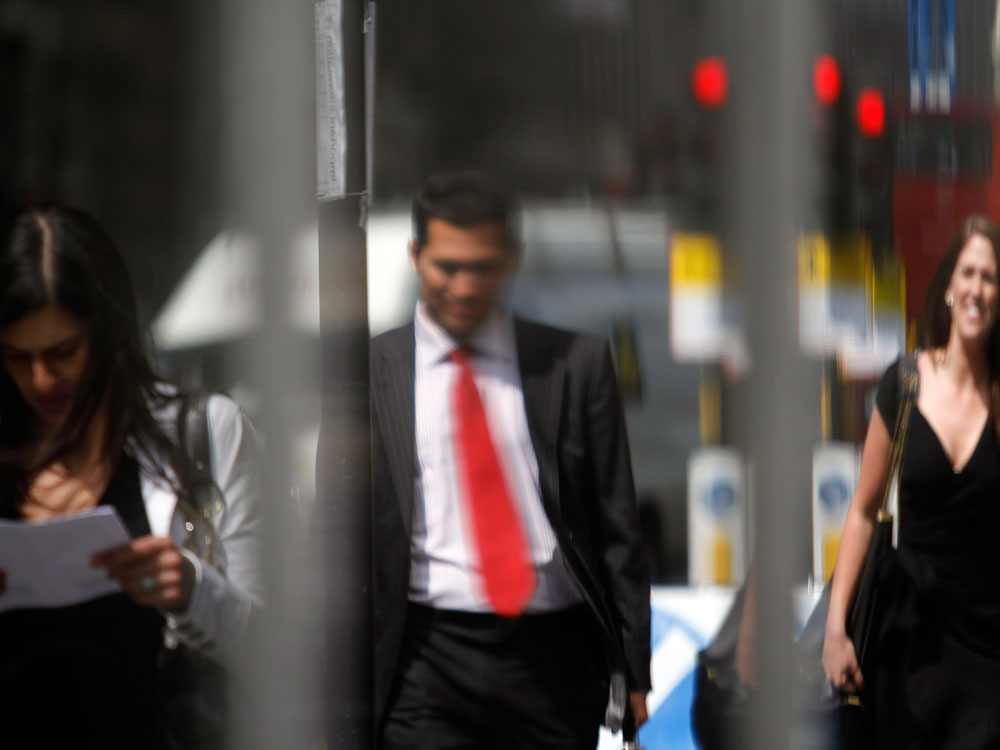 People are reflected on a window as they walk in London's financial district in May. World stock markets and the euro tumbled in May and June on fears that Europe's debt crisis would spread.

Beyond that, the arrival of millions of Muslim immigrants created even more divisions.

And in 2005, anti-Brussels sentiments led Dutch and French voters to defeat a hefty and undecipherable constitution for the EU. It was a major blow to a half-century of hopes for European unity.

One of the ill-fated document's authors was Belgian statesman Jean-Luc Dehaene. He concedes that the emotional driving force that first united Europe had dried up.

"Citizens experience the global world as a threat. They are afraid of all the changes that are in the global society. They feel very insecure and go back to their own cocoon. You see some nationalism coming up again in different member states," Dehaene says.

Turnout at European Parliament elections is plummeting as right-wing and xenophobic parties gain popularity. There are growing numbers of regions seeking independence -- for example, the Basque lands from Spain, Corsica from France, and Flanders from Belgium.

Italian statesman Giuliano Amato says the atmosphere is "of an increasing separation of our member states from each other." In a lecture at New York University this year, Amato -- another constitution author -- said that Europeans feel disempowered and are turning against the world.

He says it's not possible for Europeans to share the same common cause that initiated the unity movement five decades ago. He says they must find a new sense of mission.

Will the next generation reignite the European flame?

A group of young European civil servants recently came to Brussels to learn about the EU.

"Even though I am European, I could not accept a European government without a national government," says Brigitte Bay, who is Danish.

Jakup Johanik comes from Prague, Czech Republic: "I am really proud that first I am Czech, and second that I am European."

Gavin Todd-James is from London: "I probably call myself British, rather than European, but it has certainly opened me up to the idea that I am part of something wider."

It's that "something wider" that has ensured the longest period of peace and economic growth in European history -- and that is now in search of a new identity.