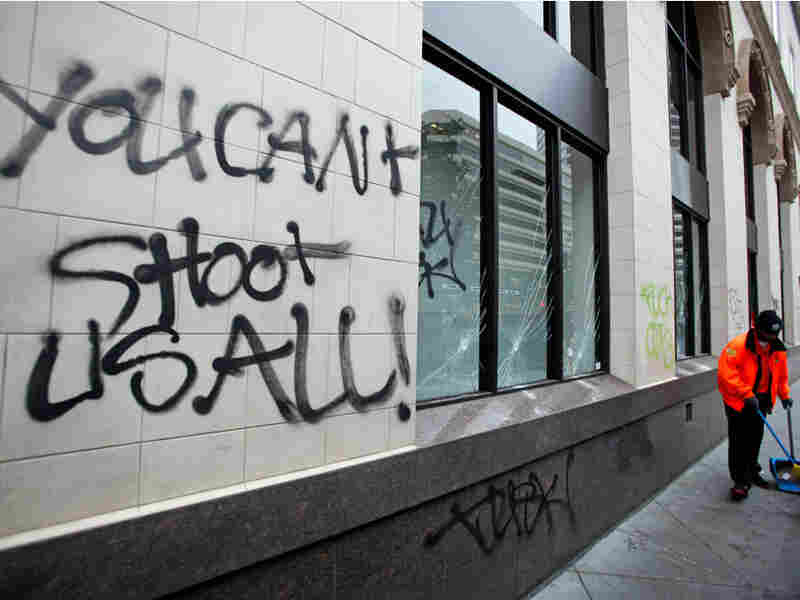 A worker with the Downtown Oakland Association sweeps the sidewalk near graffiti painted by protesters outside a drug store in Oakland on Friday. The federal government said it will investigate now that officer Johannes Mehserle was convicted Thursday of involuntary manslaughter, touching off angry protests that damaged stores and netted dozens of arrests. Eric Risberg/AP hide caption 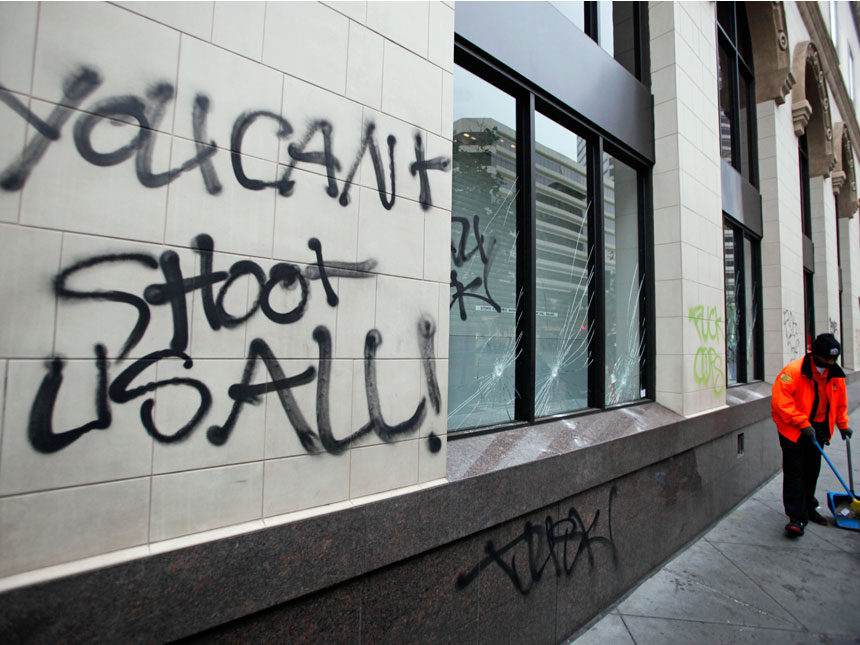 A worker with the Downtown Oakland Association sweeps the sidewalk near graffiti painted by protesters outside a drug store in Oakland on Friday. The federal government said it will investigate now that officer Johannes Mehserle was convicted Thursday of involuntary manslaughter, touching off angry protests that damaged stores and netted dozens of arrests.

For the past several months, many in Oakland's black community have urged federal authorities to investigate the New Year's Day 2009 shooting of Oscar Grant by former BART police officer Johannes Mehserle as a hate crime.

On Friday, a Justice Department spokesman said that the civil rights division will review the case along with the U.S. attorney's office in San Francisco and the FBI.

The lumbering, 6-foot-5-inch and 250-pound Mehserle was led out of a Los Angeles County courtroom in handcuffs Thursday after having been convicted of involuntary manslaughter in the slaying of the 22-year-old Grant on an Oakland train platform last year.

Mehserle, who had been a relative rookie with just two years' experience under his belt at the time of the shooting, is one of the first San Francisco Bay Area cops to be convicted of killing someone in the line of duty. He faces a sentence of between two and four years in state prison for the manslaughter conviction. He faces an additional three to 10 years for having used a gun in the commission of a crime.

Mehserle will be sentenced on Aug. 6, and his defense attorney, Michael Rains, indicated that he plans an appeal. Rains asked the judge to release Mehserle pending sentencing, but Judge Robert Perry said no. Suddenly, Mehserle found himself on the receiving end of the handcuffs.

The case was heard in Los Angeles, and not in Oakland, owing to the pretrial publicity and the racial dimensions of the incident. Mehserle, 28, is white and Grant was African-American.

After the verdict was announced, protesters took to the streets, damaging at least a dozen businesses. Police said they made 83 arrests throughout the night for violations that included failure to disperse, vandalism and assaulting a police officer.

The controversial shooting occurred as Mehserle and another officer, Anthony Pirone, were trying to subdue Grant, whom they suspected of having been in a fight on a BART train in the wee hours of Jan. 1, 2009. The disturbance attracted the attention of dozens of witnesses, including several who had video cameras.

The footage is shaky, grainy, and sometimes difficult to make out. However, at least two recordings clearly show Mehserle and Pirone on top of Grant, who is lying face down on the platform. Suddenly, Mehserle stands, draws his weapon, and fires a single fatal shot into Grant's back. It appears that Grant's hands are behind his back immediately after the shot was fired.

In tearful testimony, Mehserle said that just before the shooting he yelled "I'm going to Tase him!" before mistakenly drawing his handgun.

Alameda County prosecutor David Stein argued that the shooting was intentional and that Mehserle had lost control of his emotions. He said that Mehserle should have known he had his gun in his hand because the officer carried it on his strong side -- his right -- and the Taser was carried on Mehserle's weak, or left side. The Taser is yellow and a couple of pounds lighter than Mehserle's handgun.

Stein pounced on another reason Mehserle should have known where his Taser was: The officer had been on the train platform for less than 2 1/2 minutes before the shooting. And in that brief period of time, Mehserle had already pulled out and reholstered his Taser two times as a warning to Grant and his friends.