Accessibility links
Fighting For The Right To Marry, A Family Tradition Almost 50 years ago, as an interracial couple, commentator Susan Green's parents had to fight for their right to marry. Now, in the wake of Thursday's DOMA decision, Green is facing a similar battle with her partner of 10 years.

Fighting For The Right To Marry, A Family Tradition

Fighting For The Right To Marry, A Family Tradition 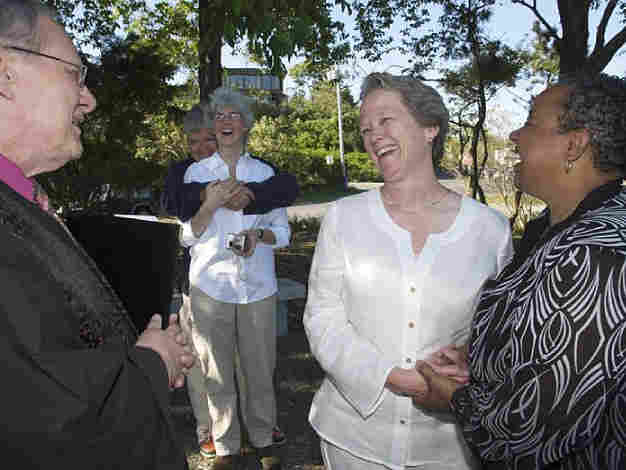 Robin Phillips and Susan Green at their wedding in Provincetown, Mass. Their marriage is not legally recognized in their home state of Arizona. Vincent Guadazno hide caption 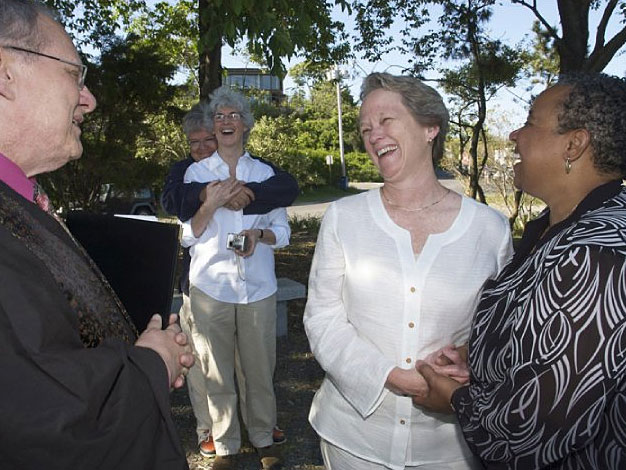 Robin Phillips and Susan Green at their wedding in Provincetown, Mass. Their marriage is not legally recognized in their home state of Arizona.

Susan Green is a professor of practice at the Cronkite School of Journalism at Arizona State University. She spent more than 20 years in broadcast journalism as a producer, executive producer and managing editor for stations in Phoenix, Washington, D.C., Los Angeles and New York City. She now lives in Arizona with her partner.

Thursday's court decision concerning the Defense of Marriage Act is not the first time my family has been involved in fighting for the right to marry. Back in 1961 my parents -- my African-American father and white mother -- had to ask permission to wed.

They met and fell in love while in Liverpool, England, 49 years ago. My mother jokes that she was at the airport waiting for her boyfriend, but his flight was delayed. My father's plane came in first, she spotted him, and that was it. Little did they know that getting married would be so difficult.

My father, a U.S. airman, had to petition his military supervisors for permission to marry. Military officials turned them down twice, saying it was against the law in several states back in the U.S. My father wasn't one to give up, and finally their request was granted the third time around. The OK came with one caveat: Our family could never be stationed at any base in a U.S. state with laws against interracial marriage.

My parents were together for 35 years, until my father's death. Their marriage is my model for what a loving relationship should be; built on respect, caring and honesty. It's difficult, and it's easy. Most important, it's worth fighting for. 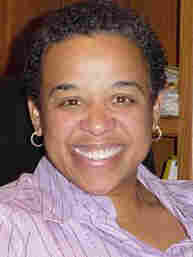 Now, here I am almost 50 years later fighting the same fight they fought all those years ago. I am a biracial woman fighting to marry her white partner. But this time around, it has nothing to do with race. No, this fight is about gender.

My partner and I have been together as a couple for nearly 10 years. We made it through Sept. 11 living in New York City, a cancer scare, and career changes. We are officially commingled. We own a home together, we are on accounts together, and we have powers of attorney. It has been our intent to replicate as closely as we can the protection that comes with a "real" marriage.

And just six weeks ago we flew to Provincetown, Mass., and got married. It was the most surreal moment as we stood in the licensing office and filled out the forms. As I wrote my parents' names on the application, I thought back to what they must have felt when they did the same thing nearly 50 years ago. I am sure they weren't thinking about the fact that they were going against the law in several states. They just wanted to get married. The same holds true for me.

They got married in Liverpool, but their marriage was still against the law in Texas. We got married in Massachusetts, and our marriage isn't recognized at our home in Arizona. I feel like I am following in my parents' footsteps, and fighting the good fight. Eventually Texas recognized their marriage. And hopefully, within my lifetime, Texas and every other state will recognize my marriage as well.