Accessibility links
‘Mockingbird’ Eases Hard Times In Harper Lee’s Hometown Though Harper Lee has always said her book, To Kill a Mockingbird, and its setting are fictional, that won't stop thousands from visiting her hometown of Monroeville, Ala., for the novel's 50th anniversary. It's welcome attention for a town struggling through the recession. 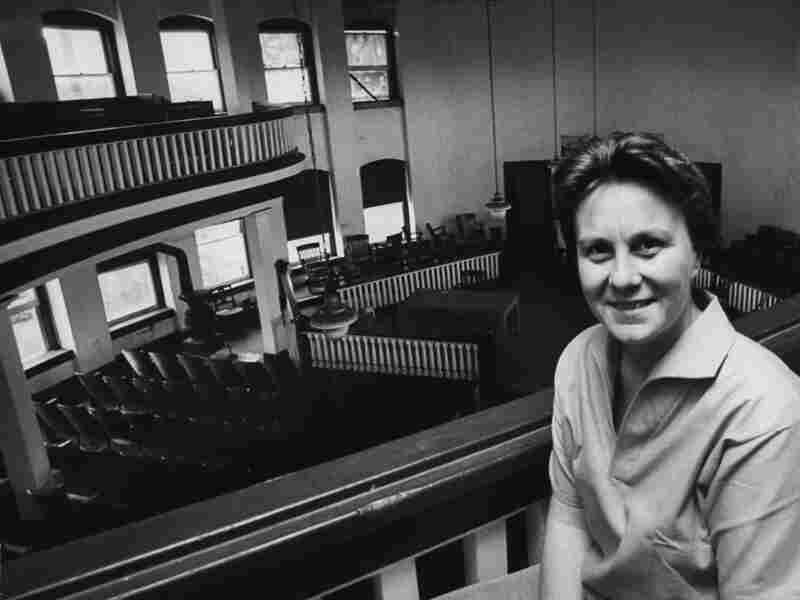 Author Harper Lee poses in the Monroeville, Ala., courthouse in 1961, the year To Kill a Mockingbird was awarded the Pulitzer Prize for fiction. The courthouse is now a museum. Donald Uhrbrock/Getty Images hide caption 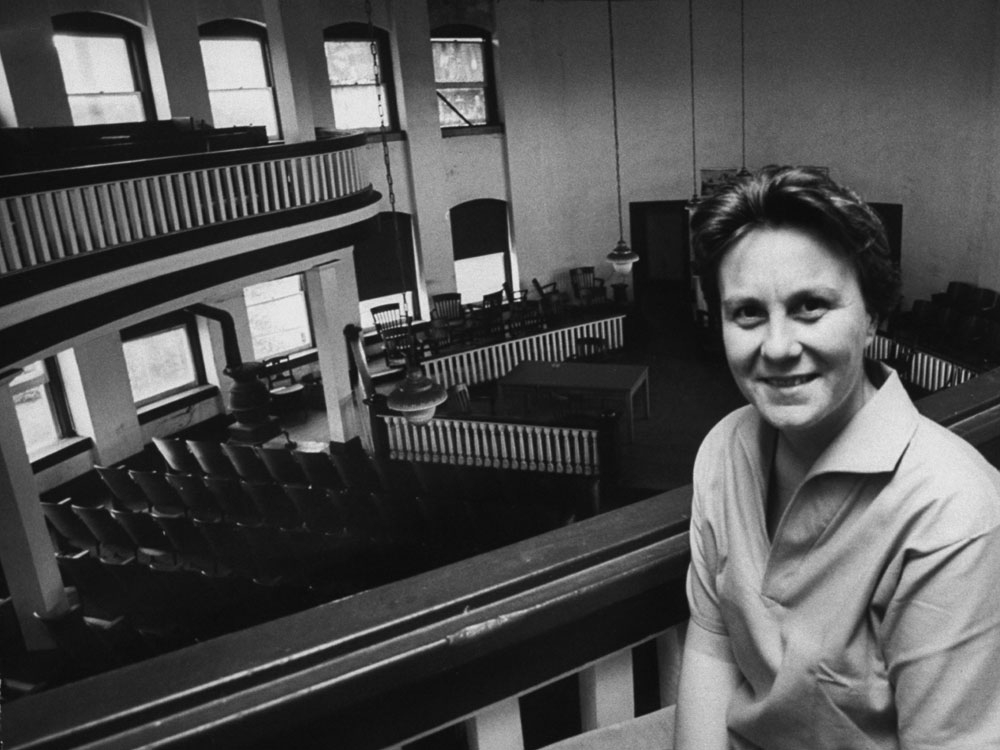 Author Harper Lee poses in the Monroeville, Ala., courthouse in 1961, the year To Kill a Mockingbird was awarded the Pulitzer Prize for fiction. The courthouse is now a museum.

Though author Harper Lee has always said To Kill a Mockingbird and its setting are fictional, that won't stop thousands from visiting her hometown of Monroeville, Ala., for the novel's 50th anniversary. It's welcome attention for a small town struggling through the recession.

Lee doesn't give interviews anymore, but there are a lot of parallels between her childhood and the book that became one of the most influential works of American literature. She and her main character, Scout, both had fathers who were lawyers. They both had a mysterious neighbor feared by local kids.

While Monroeville isn't the town in the book, it's as close as visitors will ever get.

Much has changed since Lee grew up; her childhood home was razed, and down the road there's a Walmart and McDonald's. But there are still a lot of well-preserved brick buildings from the '20s, and the mighty courthouse in the middle of the town square has been turned into a To Kill a Mockingbird museum.

The thing that sets this town of 6,000 people apart from others is literary geekiness. There are allusions everywhere to To Kill a Mockingbird, including a huge bird mural downtown.

Sandy Smith, who heads the Monroeville Chamber of Commerce, gives walking tours of the town. She says 25,000 visitors come to Monroeville every year, but this year she expects about 20 percent more.

The 50th Anniversary Of 'To Kill A Mockingbird'

As part of the book's 50th anniversary, the town is holding a series of Mockingbird-related events, some going for as much as $75 a ticket.

Yoshimi Yoshifuji, who recently moved to Alabama from Japan, says she was curious after seeing the movie adaptation of the book, so she drove down for the day to visit the museum.

"My first impression was that the South was a challenged place," Yoshifuji says in Japanese. "After watching the movie, I think everyone wonders what it's like now."

Yoshifuji picked up a copy of the book while in Monroeville. Mockingbird souvenirs also make hot items, and local businesses are looking to cash in on the demand.

Faye Dueitt runs the Purple Papaya, a small art store across from the courthouse museum. "I've got round plates and the square plates, Mockingbird margarita glasses." Dueitt created the glasses to accompany a drink called the Mockingbird Margarita.

A few blocks away, the Mockingbird Grill is busy. A framed picture from the movie and an autographed copy of the novel sit at the entrance. Waitress Kenya Perez says she sees Lee around town all the time.

"She would come in, but she don't like to be noticed," Perez says. "Her and her sister used to go down to the lake to feed the ducks, and I would take my baby, and they would have some corn that they would give to the ducks. And one day, she gave my baby some, and they fed the ducks."

Farther back in the Mockingbird Grill, teacher Chester Moore just finished lunch. A native of Alabama, Moore remembers reading the book for the first time, particularly the trial of Tom Robinson, a black man.

Today the book has taken on new importance for the region, which has 20 percent unemployment. Back at the Chamber of Commerce, Smith says attention from Lee's story has given the town new purpose.

"Monroeville since the 1930s has been a manufacturing hub. And we've had a lot of plants idled in the last couple of years because of the recession. And what this has given us is a way to at least hang on to something and somewhat reinvent ourselves off of it."