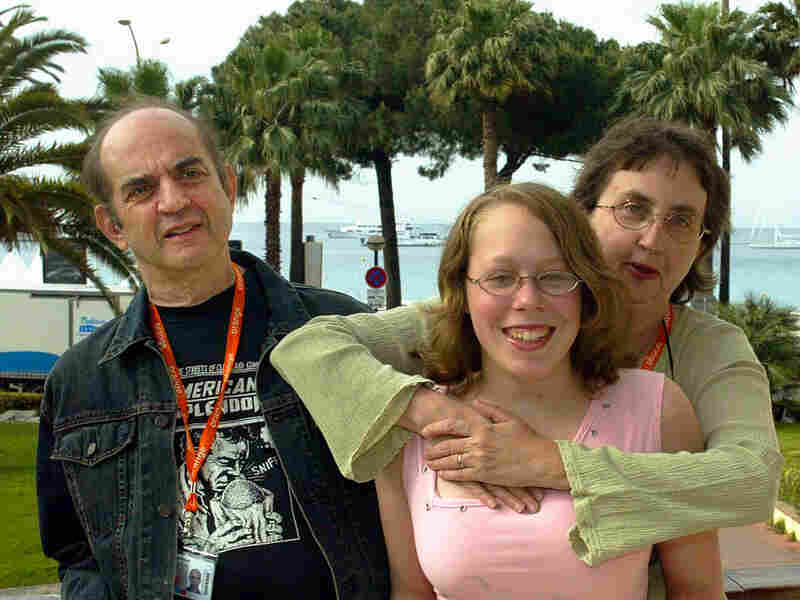 Harvey Pekar poses with his wife, Joyce Brabner, and their foster daughter, Danielle, in an unlikely spot: Cannes, where the film version of American Splendor was shown in 2003. Michel Euler/AP hide caption 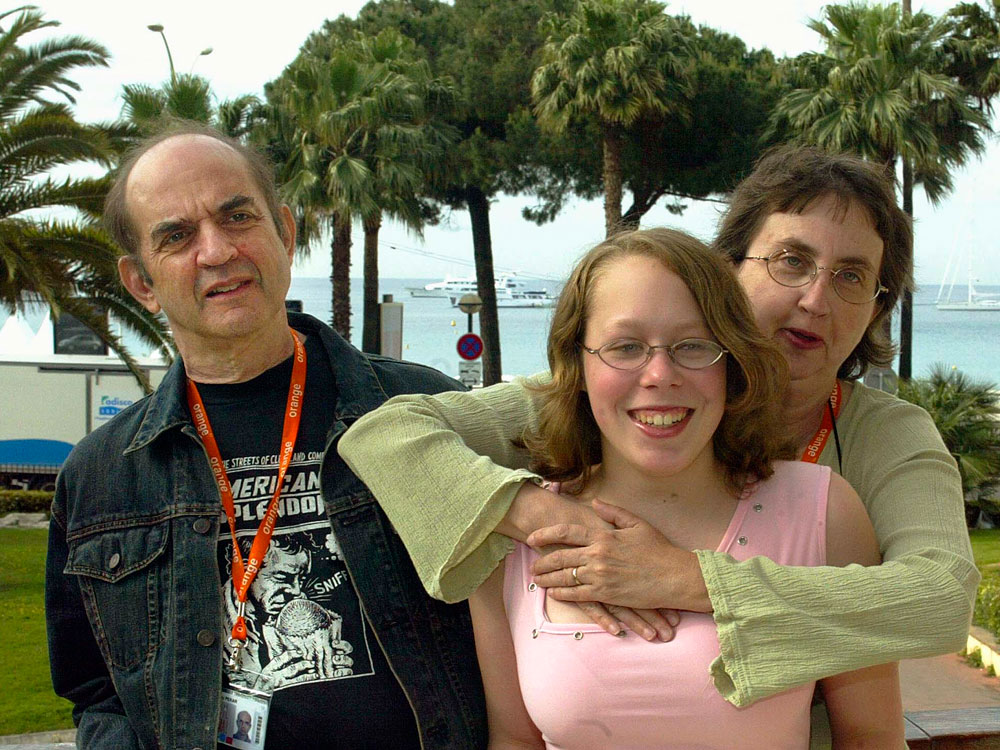 Harvey Pekar poses with his wife, Joyce Brabner, and their foster daughter, Danielle, in an unlikely spot: Cannes, where the film version of American Splendor was shown in 2003.

Comic book writer Harvey Pekar was found dead Monday morning at his home in Cleveland. He immortalized that city in his work, which critics compared to that of Chekhov and Dostoyevsky.

The cause of death is not yet known, but Pekar suffered from prostate cancer, high blood pressure, asthma and depression. He was 70 years old.

Pekar was a shlub, as ordinary as a pair of old twill pants -- the sort of thing he usually wore. But he translated his life into art: comic books, plays, an opera, even a movie. The 2003 film American Splendor was an adaptation of Pekar's autobiographical comic series of the same name; it revealed the darkly prosaic life of a file clerk who yells at old ladies in the supermarket, loses his keys, and feels rejected and alone. 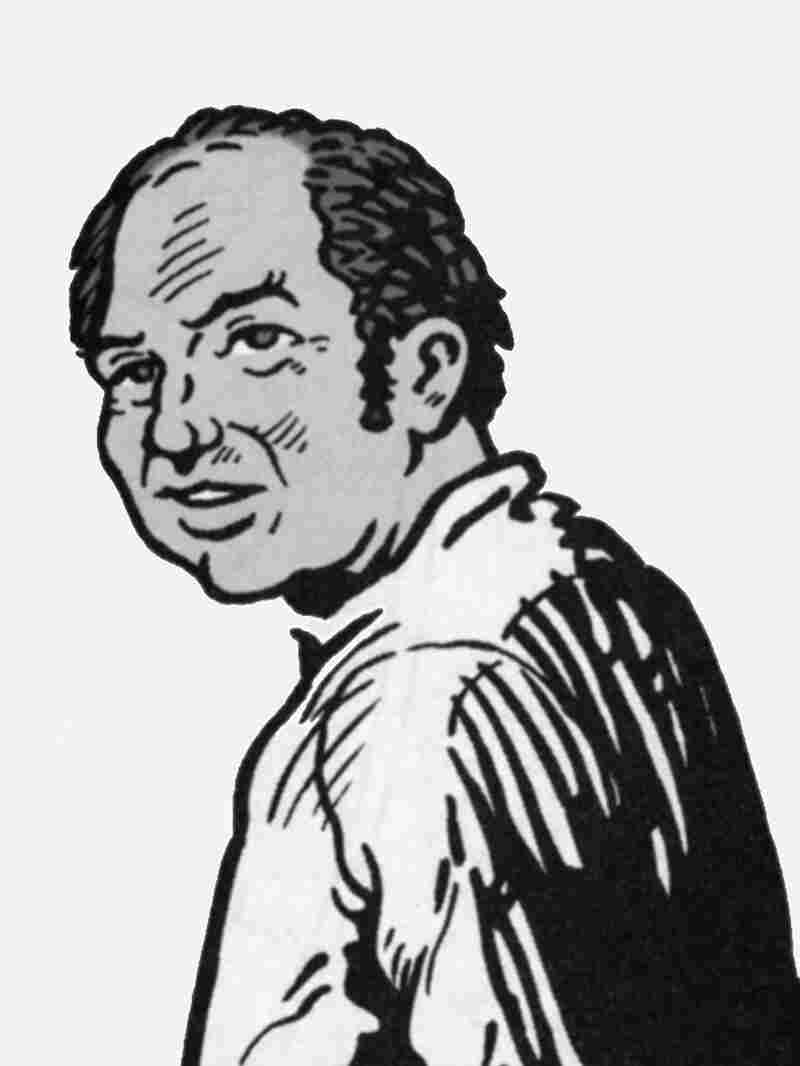 A portrait of the artist as an ordinary man. Random House Publishing Group hide caption 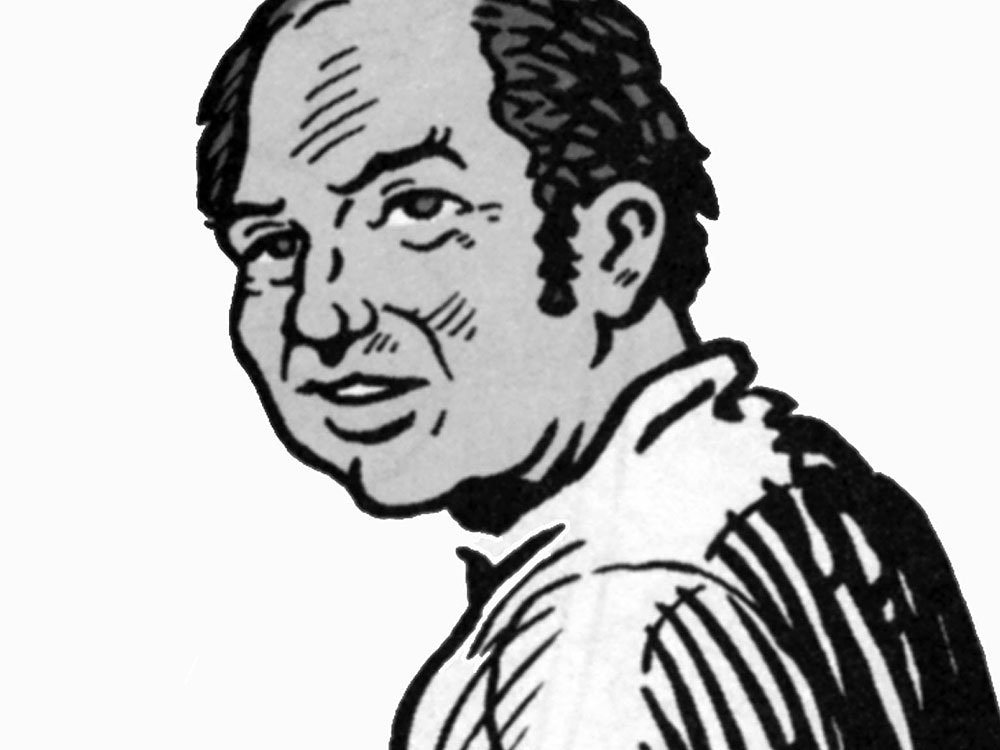 A portrait of the artist as an ordinary man.

His comic ideal was articulated in the film by actor Paul Giamatti, who portrayed Pekar: "There's no idealized sh - -. This is the real thing, man."

Pekar started writing the comic version of American Splendor in 1976, convinced that every life holds interest -- even one defined by chronic underemployment, grouchiness, collecting old records and trading postcards with a tiny group of followers, lovers and haters.

"I don't mind if I show myself being cheap or unreasonable sometimes," he told WHYY's Fresh Air in 2005. "At least I haven't killed anybody."

Over the years, Pekar's comics began attracting a following. He exchanged postcards with fans, including Joyce Brabner, who ran a comic book store and taught writing to prisoners. As Hope Davis said, playing Brabner in the film version of American Splendor: "I try to help them build an interior life and make art out of their monotonous, suffocating routine."

No wonder she was attracted to Pekar's work.

The teacher and the writer got married on their third date. Elements of Brabner and Pekar's lives -- his struggle with cancer and her political activism among them -- became creative fodder. They also inspired a new generation of graphic novelists.

"He was huge," says Glen Weldon, who writes about comics for NPR.org.

Pekar didn't illustrate his own books. Instead, he collaborated with different artists, including legendary underground figure R. Crumb.

It was anger about corporate malfeasance that got Pekar kicked off as a regular on The Late Show with David Letterman. In a famous 1987 incident, he yelled at the host about the behavior of NBC's owner, General Electric.

The man himself, and Hollywood's version:

On 'Letterman'
On 'Anthony Bourdain: No Reservations'
Paul Giammatti As Pekar In 'American Splendor'

Letterman retaliated on air by taunting Pekar and mocking his work: "We've given you many, many chances to come on this show and talk about things we thought would be of general interest to people, and also to promote your little Mickey Mouse magazine here," he said, brandishing a copy of American Splendor. Letterman also referred to the comic as Pekar's "little newsletter" and his "little clubhouse Rainy Day Fun For Boys."

Pekar's intractability and his refusal to compromise meant he never got really rich. Then again, getting rich was never one of his priorities.

"I'm trying to get every man involved in art, into experimental music, or painting, or novel-writing," he said.

What mattered most to Harvey Pekar was that people appreciate their own latent abilities, the power of the every day. Ordinary life, he liked to say, is pretty complex stuff.