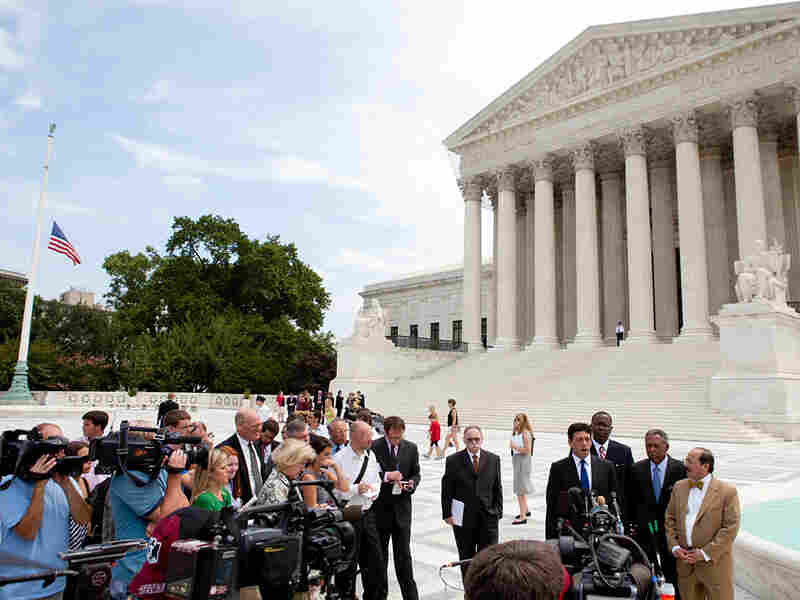 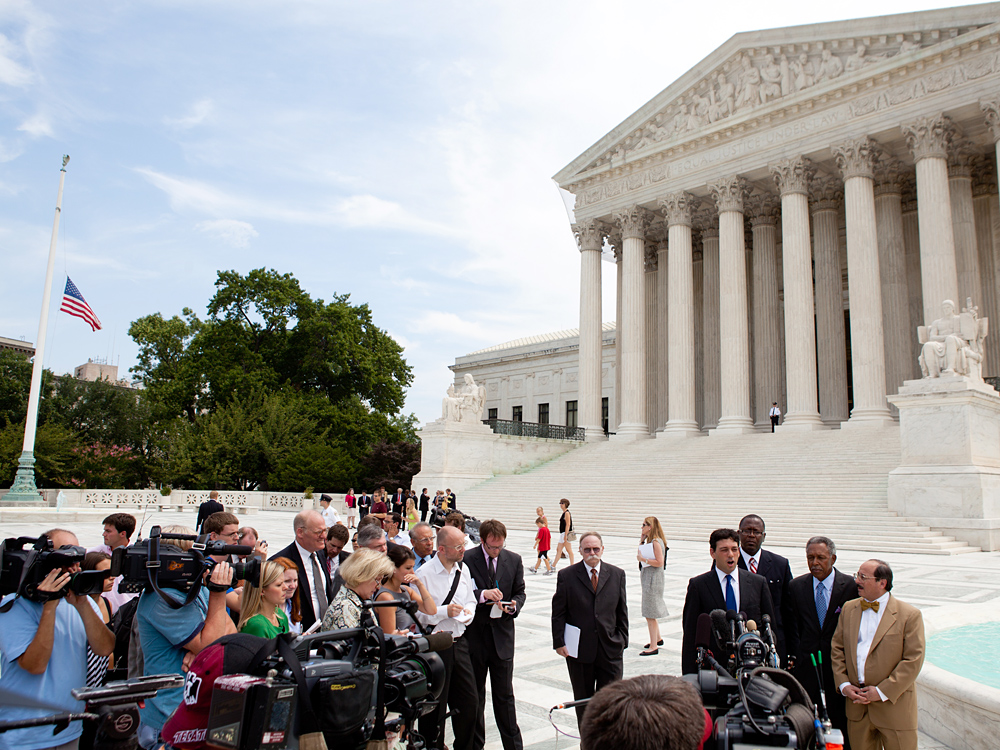 After the Supreme Court overturned Chicago's ban on handguns, lead plaintiff Otis McDonald and the National Rifle Association held a news conference outside the court building.

The justices of the U.S. Supreme Court have wrapped up their term, leaving a paroxysm of major decisions -- literally hundreds of pages of new law issued in the last week of the term alone.

The hallmark of the year transformed a relatively insignificant campaign finance case, which presented a narrow question, into a broad-based blockbuster. By a 5-4 vote, the court's most conservative justices upended understandings about campaign finance law dating back nearly 100 years.

In striking down a key provision of the McCain-Feingold campaign finance law, the court not only reversed its own past decisions; it struck down laws that for nearly a century barred corporate spending in candidate elections.

It was a decision so controversial that President Obama singled it out for opprobrium during his State of the Union address, declaring that the court would "open the floodgates for special interests, including foreign corporations, to spend without limit in our elections."

Those remarks, delivered with much of the court in the audience, angered Chief Justice John Roberts. Weeks later, the chief justice struck back, calling the occasion a "partisan pep rally."

"The image of having the members of one branch of government, standing up literally surrounding the Supreme Court, cheering and hollering, while the court, according to the requirements of protocol, has to sit there expressionless, I think is very troubling," he said.

Roberts has not stopped smarting since. He has a fair amount to smart about. Critics have branded the decision "agenda-driven," an example of judicial arrogance in which the court substituted its judgment for that of Congress. University of Chicago law professor Geoffrey Stone, for instance, observes that the conservative majority simply didn't believe Congress' extensive findings that corporate spending has had a corrupting influence on legislation.

"They're completely skeptical about them," says Stone. Instead of weighing the government's legitimate interest in preventing corruption, he maintains, the conservative majority instead believed at the outset that the limits on corporate spending were nothing more than attempts by Congress to "manipulate the political process."

Supreme Court advocate Maureen Mahoney doesn't read the decision that way. She contends the justices "call 'em like they see 'em." The conservative majority, she says, struck down part of the campaign finance law "because they decided it violated the First Amendment" guarantee of free speech.

Other Cases: Federal And Local

The campaign finance law clash is the most visible -- but hardly the only -- disagreement the Supreme Court had with the president or Congress.

Sometimes the votes were close. A five-justice conservative majority invalidated a provision guaranteeing independence to the accounting oversight board set up in the wake of the Enron scandal. But it was an 8-1 vote that struck down a federal law making it a crime to create or sell depictions of animal cruelty. And in another ruling, the court, by a lopsided vote, struck down most of the statute that punishes public officials and corporate executives for corrupt practices. The court said the statute's language was too vague.

Moving on to state and local laws, the court took on the question of gun rights. Expanding a decision of two years ago, the conservative five-justice majority this time declared that individuals can challenge state and local firearms restrictions as a violation of the right to keep and bear arms. At the same time, though, the court gave little guidance to the lower courts on how to evaluate which gun restrictions are constitutional and which are not. Former Solicitor General Walter Dellinger predicts the decision will lead to "a tsunami of challenges to state and local gun laws."

If the line on gun rights was fuzzy, it was bright and clear in a major juvenile sentencing case that will affect laws in some three dozen states. By a 6-3 vote, the court ruled it is unconstitutionally cruel and unusual punishment to sentence a juvenile convicted of a nonhomicide crime to life in prison without the possibility of parole.

In another criminal law decision, the justices ruled 5-4 that a suspect must speak up to invoke his right to silence. Simply refusing to answer questions from police for several hours was not enough to qualify as invoking the right to remain silent, the court said. George Washington University professor Paul Butler says this and other decisions of this term chip away at the court's 1966 Miranda decision requiring police to warn suspects of their rights. Miranda, he says, "is alive, [but] not well."

There was just one national security case this term -- a test of how far the federal government can go in prosecuting people for giving material support to terrorist groups. By a 6-3 vote, the court ruled that even advocacy for a peaceful solution to conflicts can violate the law if it comes in the form of training terrorists how to make their case before international legal tribunals.

While the major decisions of this term deeply split the court, there were considerably fewer such divisions this term than last. Some 56 percent of the term's decisions were either unanimous or with just one dissent.

At the same time, the court seemed to jump without hesitation into controversies, issuing rulings without even hearing argument in many more cases than usual.

The court put on hold a public financing system that has been in place in Arizona for 12 years, throwing the state's politics into disarray in the midst of a hotly fought primary campaign.

The justices also injected themselves into a trial testing the right of gay couples to marry in California. In an unsigned opinion, the court's five most conservative members bowed to a plea from gay-rights opponents who claimed that they would be harassed if the trial were broadcast in even the most limited way. The five-justice majority nixed a plan approved by the federal trial and appellate courts that would have allowed the proceedings to be broadcast to a few other federal courthouses.

Indeed, the whole subject of gay rights seemed to generate disputes about who is an oppressed minority.

Dellinger, the former solicitor general, observes that gay and lesbian groups see themselves as an oppressed minority, as do "Christians and traditional marriage people" -- and the justices are dividing, sometimes in unexpected ways, over "who they think needs protection from a larger culture."

Opponents of gay rights lost two cases in which they contended they were the victimized minority. In one, they objected to public disclosure of the names of petition-signers seeking to get an anti-gay-rights initiative on the ballot. In another, the court rejected an appeal brought by a campus religious group that lost its school subsidy at a state law school because the group refused to admit homosexuals as members.

The 5-4 clash of views in this last case was crystallized in a passionate dissent from Justice Samuel Alito and a majority concurrence from Justice John Paul Stevens. Alito accused the majority of putting "political correctness" ahead of the right to free speech and association, and Stevens responded that while a free society "must tolerate" groups that exclude homosexuals -- or Jews, or blacks, or women, for that matter -- "it need not subsidize them."

Just who was the most influential member of the court this term?

Certainly Chief Justice Roberts won far more battles than he lost. He was in the majority more than any other justice, 92 percent of the time. And he achieved his goal of more consensus.

Justice Anthony Kennedy remained a pivotal vote. "Even if you didn't need Justice Kennedy's vote to win every case this term, you did seem to need his vote to do something really big and important," says Supreme Court advocate and law school lecturer Tom Goldstein. "He's the one who drives the biggest jurisprudential changes in the law."

Indeed, Kennedy wrote both the campaign finance decision and the juvenile life-term case.

Conversely, without his vote, a number of conservative efforts to do big things have fizzled.

The other big player this term was Justice Alito. Because he is a consistent conservative who replaced the more moderate Justice Sandra Day O'Connor, his vote has swung the court quite dramatically to the right. And this term, he wrote the court's important gun decision.

Finally, this term marked the last for the retiring Justice Stevens, who, over his 34-year tenure, was a forceful and beloved member of the court, and an astute coalition builder. Appointed by President Ford, he was the last moderate Republican appointee remaining after the retirements of Justices O'Connor and David Souter.

On a conservative court, though, he was viewed as the most liberal justice, with the three Democratic appointees actually slightly to his right.

"The left on the court is basically hanging on by its fingernails," observes Goldstein. "They're not really liberal and they don't have the votes."

The addition of a Justice Elena Kagan will not change that, even if she is as liberal as her Republican critics fear.