Accessibility links
Live Nation Stumbles Over Summer Concert Sales Since the summer concert season started, the buzz around the music industry has been about two things, neither of which is good for business: low ticket sales and canceled concerts. Last week, three shows on Rihanna's tour were canceled, adding to a list that already included canceled or postponed dates on the Lilith Fair tour and tours by Christina Aguilera, The Eagles, Simon and Garfunkel, The Jonas Brothers and Limp Bizkit. 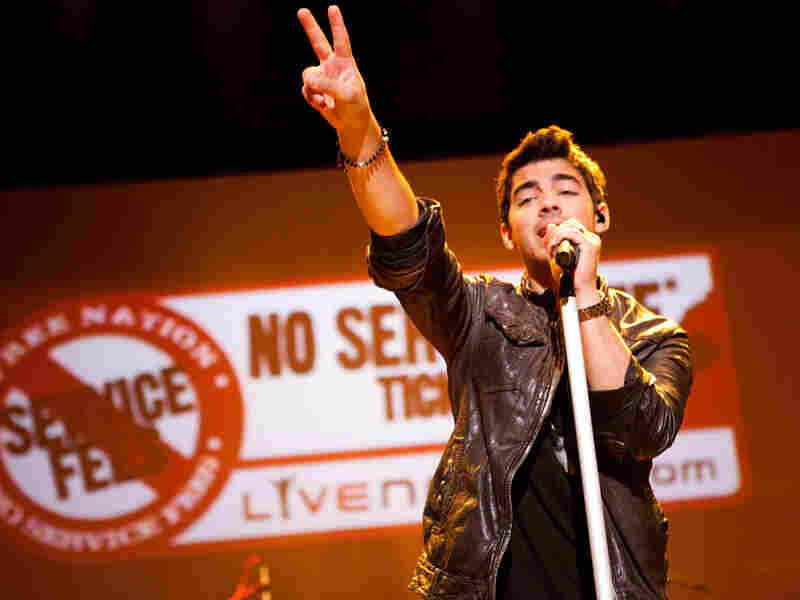 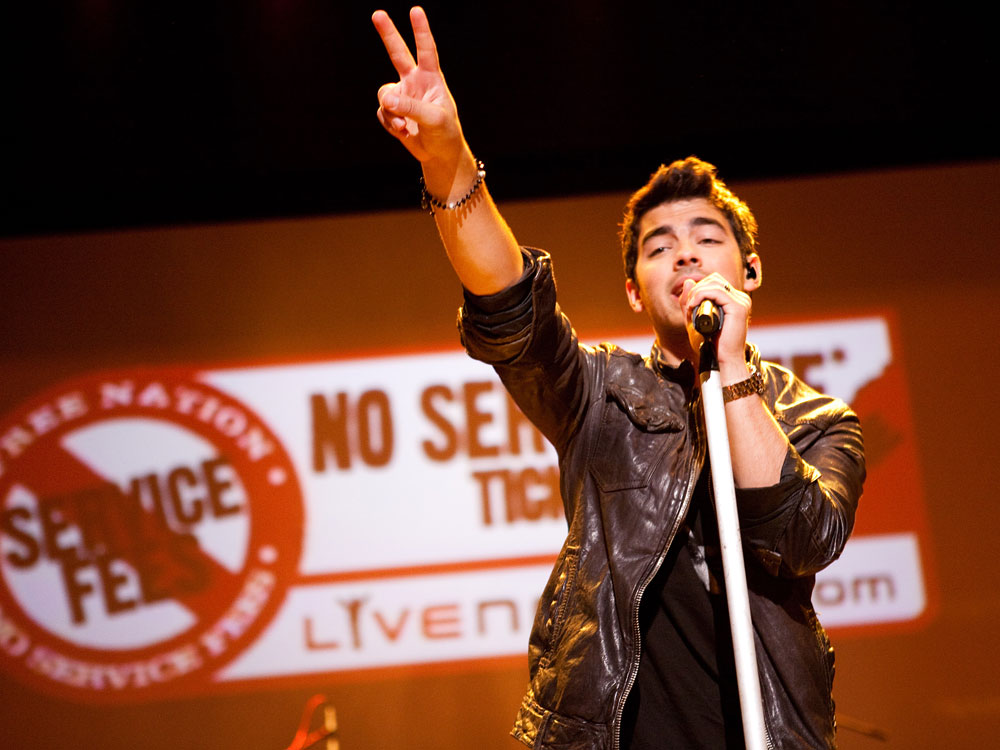 Joe Jonas of the Jonas Brothers performs for a Live Nation event last month to promote the company's No Service Fee June.

Since the summer concert season started, the buzz around the music industry has been about two things, neither of which is good for business: low ticket sales and canceled concerts. Last week, three shows on Rihanna's Last Girl on Earth tour featuring Ke$ha were canceled, adding to a list that already included canceled or postponed dates on the Lilith Fair tour and tours by Christina Aguilera, The Eagles, Simon and Garfunkel, Jonas Brothers and Limp Bizkit.

A downturn could be disastrous for Live Nation, the country's biggest promoter of live music. Earlier this year, Live Nation's merger with Ticketmaster was approved by the Justice Department. That should make the company even more powerful, but some in the industry say that Live Nation's own business model has caused it to stumble.

Independent promoter Seth Hurwitz, a competitor of Live Nation's in the Washington, D.C., area -- he owns the 9:30 Club and Merriweather Post Pavilion, as well as the promotions company It's My Party, or IMP, Productions -- says he's not surprised that some of this summer's tours are flailing.

"Sales are down in bad situations, like they should be," Hurwitz says. "But, you know, talking about the concert business as a whole, as it relates to the large companies that try to run the whole industry, is a little like asking BP, 'How's the oil business these days?' "

The two largest companies in live music are Live Nation and AEG. Between them, the two promoters sold nearly two-thirds of all concert tickets American audiences bought in 2009, according to an end-of-the-year report from Pollstar, the publication that tracks the concert industry. The report, released by Pollstar last week, shows that for the first half of 2010, gross revenues for the Top 100 tours in North America dipped 17 percent from the same period in 2009, a loss of nearly $200 million.

If the trend continues, it could spell trouble for the entire music industry, which has come to rely on income from touring to take the place of diminished sales from recorded music. But for the major promoters who are heavily invested in the machinery of touring, the threat is especially acute.

According to the recent report by Pollstar, Live Nation sold 9.7 million tickets in the first half of 2010 -- far more than its closest competitor, AEG, which sold 5.6 million. But Live Nation's sales showed a significant drop from the same period in 2009, when it sold 12.9 million tickets. Live Nation declined to comment for this story.

Traditionally, promoters have been the middlemen of the concert industry, in between musicians and venues. The job of a promoter is to take care of everything that doesn't happen onstage: booking venues, hiring local labor, taking out ads and making sure all the tickets sell.

Louis Messina, a promoter for more than 35 years, says that if he does his job right, when the musician gets to town, the only thing he or she should have to worry about is "going onstage and doing their show, because everything else has been taken care of." Messina started PACE concerts, an independent promoter, in 1975. He worked for Clear Channel in the 1990s, and today his company, the Messina Group, is owned by AEG. He takes credit for an innovation that changed the promotions business.

"You know, I guess if anything, I was the bad guy," Messina says. "We made a decision a long time ago, because profit margins are so small promoting concerts, that we had to get into the building business."

For promoters, getting into "the building business" means building amphitheaters: outdoor venues that are less expensive than arenas to construct, but can still provide large spaces for thousands of fans to see musicians play live. As owners, promoters don't have to rent someone else's venue, which means they pocket all the money concertgoers spend that doesn't show up on a ticket stub.

"Whatever they charge for beer, $10 or $15, and parking, all that's where they're making their money," says Pearl Jam's longtime manager, Kelly Curtis. "They can almost afford to pay an artist more than what they're making in ticket sales."

But Messina says that the more venues promoters built, the more they relied on artists.

"No one is coming to a venue to see a stage," Messina says. "Without the act, you just have dirt or concrete." According to Messina, artists and their managers began asking for a slice of the pie.

"The concert promotions business is more voodoo art than it is science," says Gary Bongiovanni, editor-in-chief of Pollstar. "There is a substantial chance in every case that you're going to lose money potentially, and the bigger the star, the more money you're having to guarantee. Thus, the greater risk you're taking."

Expand to a huge scale, and the Live Nation model begins to come into focus. Today, Live Nation owns most of the amphitheaters in the country, and it owns a majority share of the artist management company Front Line, which represents 200 of the world's top acts. When summer rolls around, Live Nation can set up entire tours where its artists play exclusively in its venues. Musicians are paid a guaranteed sum to play a certain number of dates over the summer.

Market analysts who cover Live Nation's business say that in theory, the company's huge network of affiliated musicians, promoters and venues can help it avoid booking conflicts and maximize the impact of a single tour. The potential payoff is huge, especially when revenue from advertising and sponsorships at the venues is added, but the window is small: Live Nation has essentially built a nationwide string of beach houses, and they have to keep them filled all summer.

"The temptation during the summer months is to buy as many shows as possible to keep that activity level up in their venues," Bongiovanni says. "They may well be buying shows they should have passed on."

When shows don't sell, promoters can cut their losses and cancel concerts or reduce ticket prices to put bodies in seats, hoping that beer sales will help make up some of the shortfall. This summer, Live Nation has tried both tactics. In addition to cutting back shows by Rihanna and others, the company also eliminated ticket fees for the month of June, and offered its fans on Facebook access to tickets for as little as $10.

Messina, who put together two of the top five tours of the year so far, according to Pollstar's midyear report, says that's bad business.

"Whenever you have to back into a ticket price because you pay too much for an artist, it's a broken model," Messina says.

It can strain a promoter's relationship with fans, too.

"Nothing makes a fan more disappointed than to have bought a ticket when they first went on sale at full price to find out that other people are getting in for 10 bucks," Bongiovanni says.

The Concert As 'Product'

According to Hurwitz, a promoter's first responsibility is to make sure the concertgoing experience is a good one.

On its most recent tour, Pearl Jam played in a few Live Nation-owned venues, but manager Curtis says the centralized Live Nation model doesn't work for the band.

Curtis says that Pearl Jam gets upfront money for the dates it schedules, but because the band books those tours with as many as 20 different promoters (some of whom work for Live Nation) across the country, any risk is spread out, and the promoter in each town knows which local venue is the best place for the band to play. Curtis says he believes that the band might take less money in the short term, but in exchange, Pearl Jam retains control over the number of tour dates and the venues.

Messina, who booked Taylor Swift's Fearless tour last year, says the star made a financial sacrifice, too, in the name of satisfying fans.

Unless ticket sales start to turn around, that's a reality that everyone in the industry might have to get used to.