Accessibility links
New Evaluation Laws Split Teachers Even More Teachers across the country are confronting new state laws that evaluate and reward teachers based on student achievement. Education organizations have stood up not only to legislators, but also to each other. 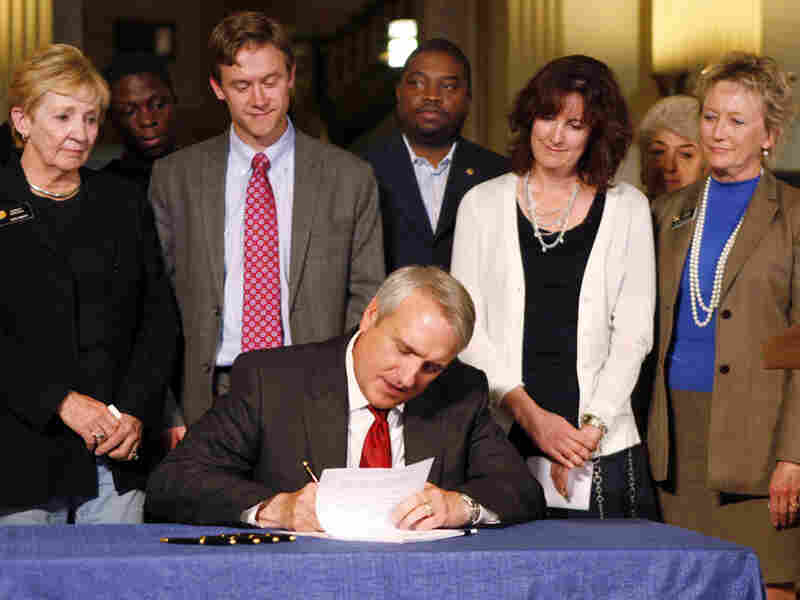 Colorado Gov. Bill Ritter, seated, signs a tenure bill that will judge teachers on student performance. Colorado has been a key state in nationwide efforts to evaluate and reward teachers based on student achievement. Ed Andrieski/AP hide caption 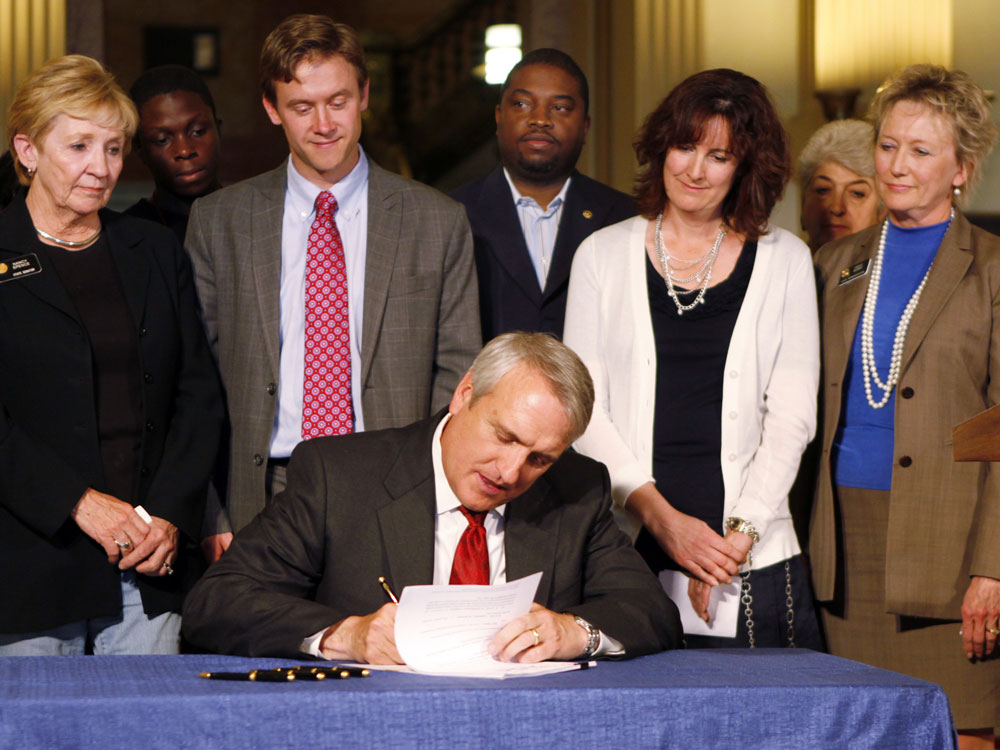 Colorado Gov. Bill Ritter, seated, signs a tenure bill that will judge teachers on student performance. Colorado has been a key state in nationwide efforts to evaluate and reward teachers based on student achievement.

When summer ends, many teachers will face a new reality: A number of states have passed new laws and policies that tie teachers' job security to how well their students do in class. Some teacher groups dropped their longstanding opposition to this idea, and now say it will be good for the profession. Still, many teachers fear the new evaluation systems are part of an attack on their profession.

Colorado was at the forefront of an effort to reward teachers who boost student achievement and to get rid of those who do not. After a bitter fight in the Legislature, the Colorado branch of the American Federation of Teachers helped broker a deal. Brenda Smith, president of an AFT local union in Colorado, says her members recognized it was time to stop resisting an idea whose time had come.

"The question that I get most often is, 'How do I become an active member in building this system?' I think our teachers see it as a challenge, and I think they're ready for it," Smith says.

But that positive attitude masks deep wounds from the fight over the legislation. The much larger Colorado Education Association fought the new evaluation proposal and embraced it only when it was clear it would pass. Spokesperson Deborah Fallin says the bill was a desperate gambit to appease Washington so the state could qualify for the "Race to the Top Fund," a federal program meant to spark education reform.

"They felt that this was rammed down their throats," Fallin says.

Now, under Colorado law, half of a teacher's performance evaluation will be based on student progress. But the details still have to be worked out; the law doesn't take full effect until 2014. That means teachers can still try to water down the new system, if they feel a bad process is being forced on them. Fallin says districts are in for a surprise, as they try to make this change during the worst budget crisis in decades.

In Teacher Layoffs, Seniority Rules. But Should It?

"Districts do not have the money to train principals, to move from evaluating every three years to every year," Fallin says.

Wholesale retooling of teacher evaluations has never been tried before on such a huge scale. In a big experiment, there are bound to be mistakes.

"Absolutely, this all could go south," says Kate Walsh, the president of the National Council on Teacher Quality.

Walsh says even if most districts do a good job of writing new evaluations, some will screw up, leading to painful stories in the media. Walsh envisions stories along the lines of: "So-and-so has been the star teacher every year, her peers look up to her, she is absolutely the best teacher around, but her evaluation found her to be unsatisfactory."

Trepidation is widespread, from Colorado to Illinois to New York, which also passed a law tying teacher evaluations to student progress. Richard Iannuzzi, the president of New York State United Teachers, says his members really are behind the changes. But they have their guard up as the pressure on teachers grows.

"There's more than just a bad taste. There's a feeling that our allies have joined the blame game, and if we're gonna make real reform, it can't be about blaming," Iannuzzi says.

Teachers also warn the hangover from these legislative changes will have consequences in the fall. Fallin has this warning for politicians counting on them to help get out the vote: "If it's a lovely Saturday morning in October, and I have the choice of staying home and doing what I wanna do or going out and walking precincts for somebody, and that person didn't stand up for us on this issue, I just might not go."

Teachers groups spent years fighting the Bush administration's No Child Left Behind Act. They now find the struggle continues under a Democratic administration -- a sign, perhaps, that education reform will cause some pain, no matter who's in charge.