Accessibility links
Can The European Welfare State Survive? Europe's social support system is under pressure. The recent debt crisis and the continent's demographic changes are shaking the foundations of the EU's shared social vision. In NPR's series on Europe, a look at how governments are struggling to preserve benefits while cutting costs. 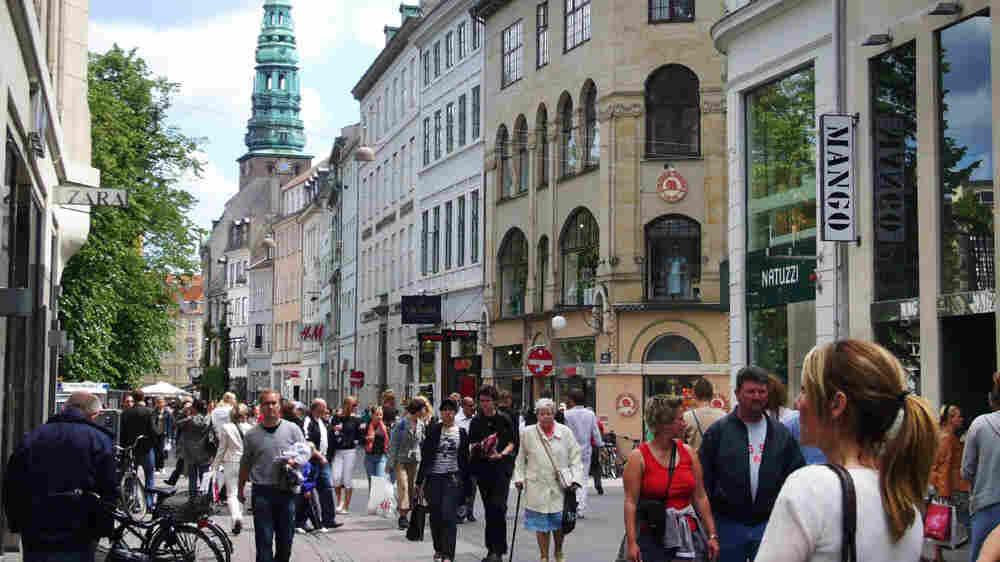 The generous social welfare system in Denmark and other members of the European Union generally provides free health care, long-term unemployment support, liberal vacation time, and solid maternity and child care benefits. But this pillar of the EU is under economic and demographic pressure. phatfreemiguel via flickr hide caption 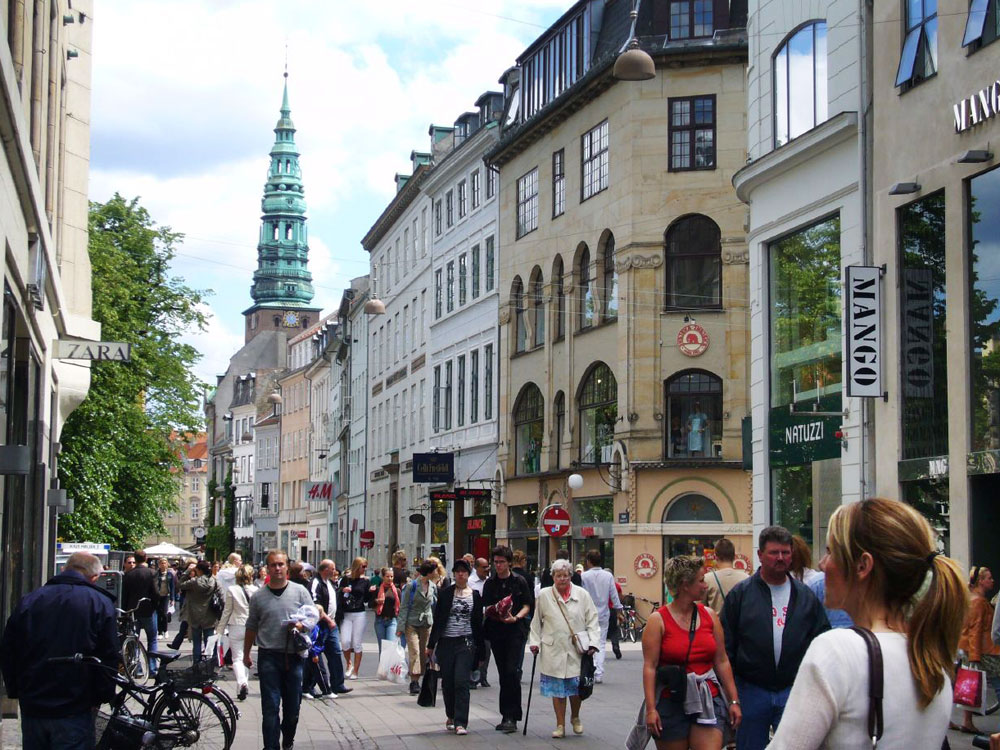 The generous social welfare system in Denmark and other members of the European Union generally provides free health care, long-term unemployment support, liberal vacation time, and solid maternity and child care benefits. But this pillar of the EU is under economic and demographic pressure.

One of the defining ideals of the European Union has been its social support system, often referred to as the European welfare state. The shared belief among EU nations that the state has a responsibility to care for its citizens has become a kind of common culture, unifying 27 different nationalities.

But the European welfare system -- largely put in place during the high-growth years following World War II -- is under economic and demographic pressure. And the recent debt crisis is shaking the foundations of the European Union's shared social vision. 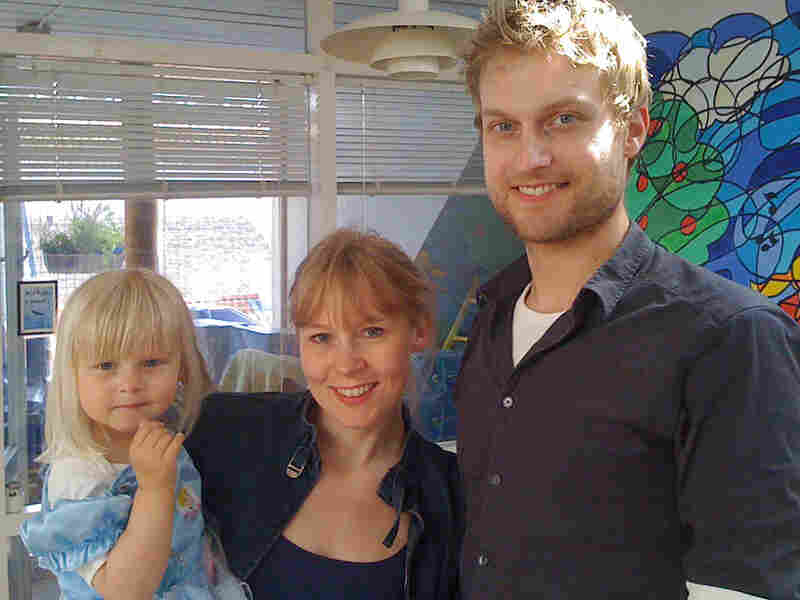 Anders Dalsager and Margit Larsen (shown here with their daughter, Astrid) are graduate students at the University of Copenhagen. They were able to have a child even though they don't have jobs, thanks to subsidies from the Danish government. Eleanor Beardsley/NPR hide caption 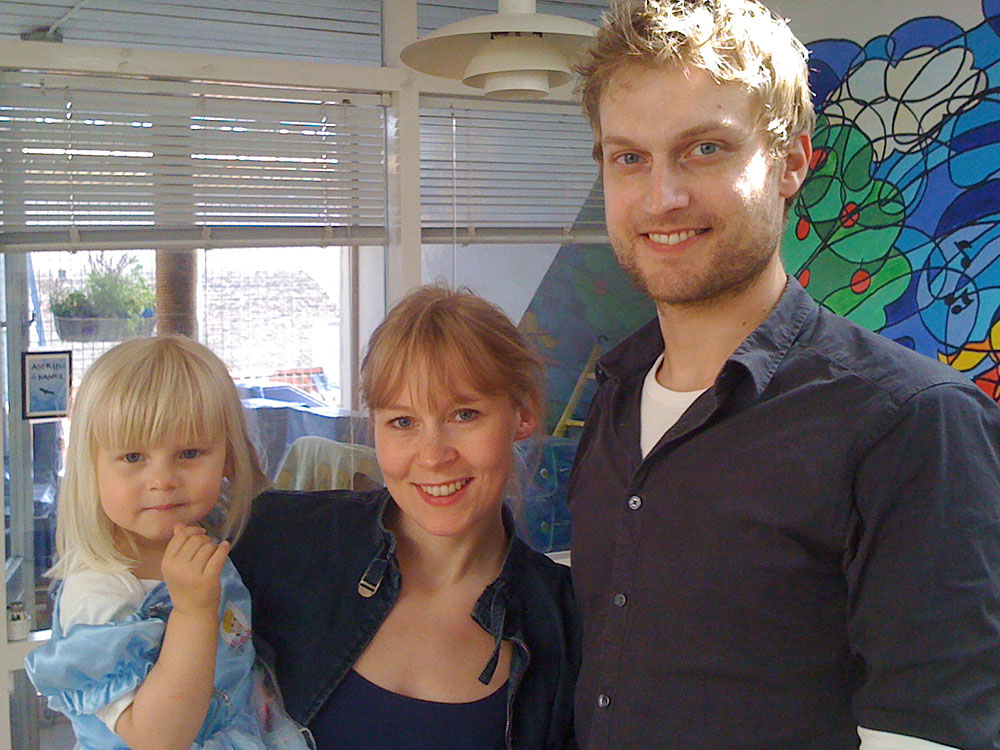 Anders Dalsager and Margit Larsen (shown here with their daughter, Astrid) are graduate students at the University of Copenhagen. They were able to have a child even though they don't have jobs, thanks to subsidies from the Danish government.

Anders Dalsager and Margit Larsen are graduate students at the University of Copenhagen. Like all Danish students, they study for free and receive a monthly stipend equivalent to about $900 per person from the government.

On a recent day, the married couple walked to pick up their 2 1/2-year-old daughter, Astrid, from the campus kindergarten.

Dalsager and Larsen say they were able to afford having a child, even though they don't yet have jobs, because the government also gives them a child care subsidy.

In Paris, 600 miles to the south, Marites David is also picking up a child from preschool. David immigrated to France from the Philippines 20 years ago. Today, she works as a nanny.

When David finally got her residency, it came with automatic coverage under France's extensive health care system. David says that has been a blessing because of her chronic asthma.

"Mostly every summer I have to go to the emergency room because I can't breathe in the summer. They look after you until you're OK. For me, everything is free -- for medicine, doctors, hospital. It's nice to live here," she says.

'Element Of European Identity' In Crisis

Dominique Moisi, a political analyst with the French Institute for International Relations, says "the European welfare system has been an important element of European identity."

"I would say [it is] one of the great comparative advantages of Europe, if not in economic terms, at least in social and human terms," he says.

Moisi says the welfare state has provided a buffer against the economic crisis, protecting Europeans from the kind of suffering Americans have gone through.

That may be true, says Nicolas Doze, a commentator on economics with a popular French business channel. But without major reforms, Doze says the European Union will not be able to maintain its vision of a kinder, gentler way of life.

"Our social system in France alone has accumulated more than 100 billion euros in debt, and it just isn't viable anymore," he says. "Today it survives thanks to one thing: France's AAA credit rating and our ability to keep borrowing to pay for the social programs." 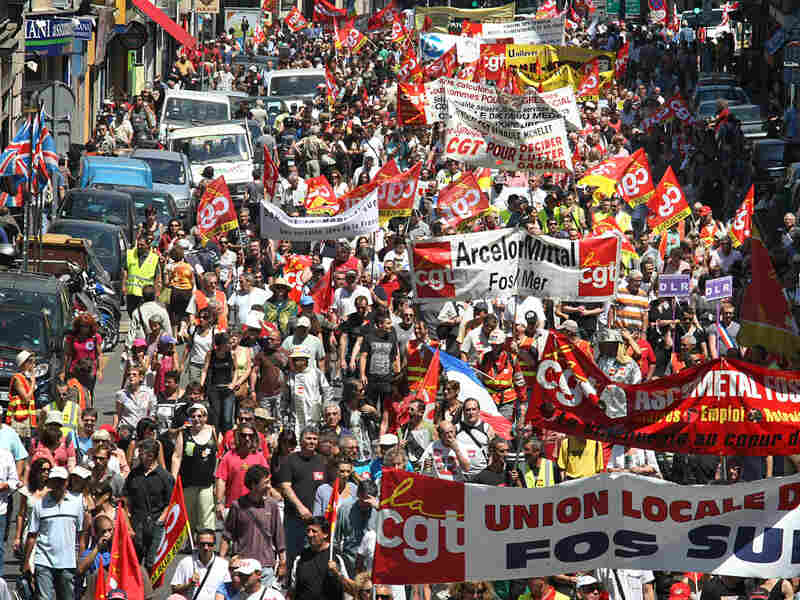 People march during a protest in Marseille, southern France, last month. Workers nationwide were striking to protest President Nicolas Sarkozy's plans to raise the retirement age to 62 from 60. Sweeping reforms to France's money-losing pension system is part of efforts around Europe to cut back on growing public debts. Claude Paris/AP hide caption 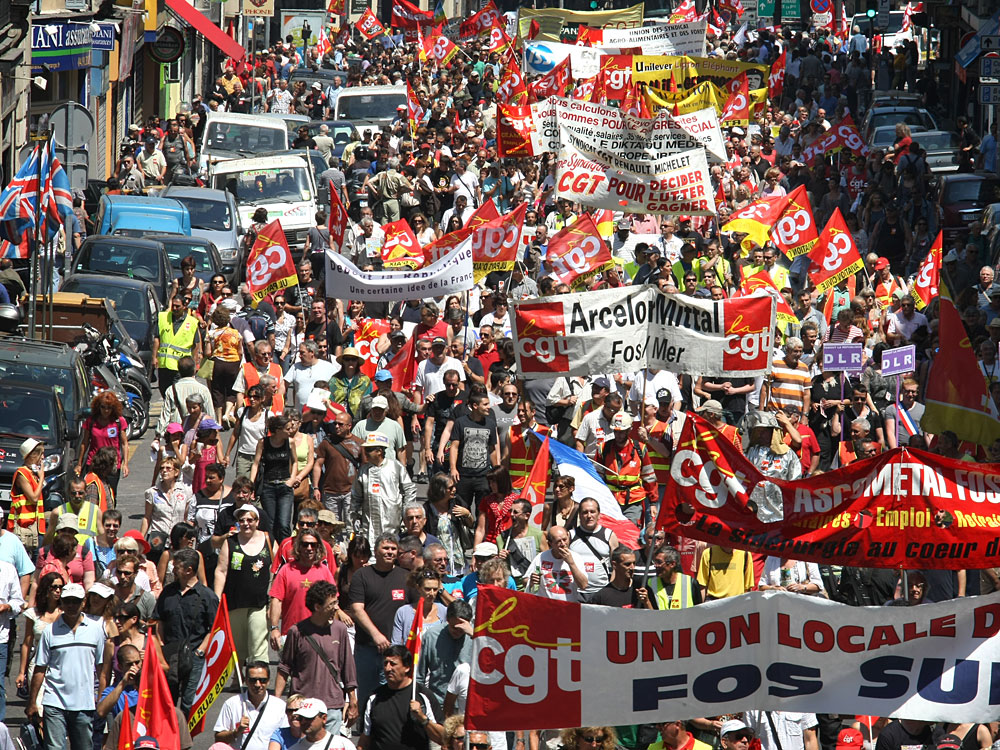 People march during a protest in Marseille, southern France, last month. Workers nationwide were striking to protest President Nicolas Sarkozy's plans to raise the retirement age to 62 from 60. Sweeping reforms to France's money-losing pension system is part of efforts around Europe to cut back on growing public debts.

Doze says the Greek debt crisis has pushed European governments to do more to reduce social spending in the past 10 weeks than they have in the past 10 years. The markets have put a revolver to their head, he says.

Indeed, governments from Germany to Spain are enacting austerity plans and spending cuts to try to reduce national debts and rein in public spending. But these reforms are being met with resistance -- and not just in Greece.

Germans are angry about cuts in social spending. In France, hundreds of thousands of workers have taken to the streets in recent weeks to protest President Nicolas Sarkozy's plans to raise the retirement age from 60 to 62.

The French government says workers must stay on the job longer to keep the state pension system afloat. But protesters say there is plenty of money -- if you tax the bankers and stockbrokers instead of bailing them out.

Francois Couder, 43, began working at the age of 17 laying underground cable in hazardous conditions for state-run France Telecom. The company has since been privatized.

Couder says the rules of the game changed midcourse, and it's the workers who are paying the price.

"We came into the company with a clear contract to work 40 years and retire. Now, the closer we get to retirement, they say, no, you need to go a little longer. Will they keep adding years? If it's all to retire into a hospice or a wheelchair, what's the point?" Couder says.

A large percentage of social spending in the European Union goes toward supporting labor market policies such as unemployment benefits and pension systems, says economist Willem Adema, with the Organization for Economic Cooperation and Development, a 31-nation group that promotes international cooperation and economic growth.

"With the dynamics of an aging population and the increase in life expectancy, and with the financial pressures, raising retirement ages is going on across many different European countries," he says.

Another problem for the EU, says Adema, is the rigidity of its labor market -- it is difficult to fire workers, making it difficult to hire new ones. Adema says that has inhibited the economic growth necessary to sustain the welfare state. Growth in the eurozone is only expected to reach 1 percent in 2010, compared to 3 percent in the U.S.

Denmark and its Nordic neighbors have the most extensive cradle-to-grave protection systems in the European Union. They also pay the highest taxes.

But the streets of Copenhagen bustle with well-off and happy-looking people. Denmark also has one of Europe's lowest unemployment rates -- about 5 percent. That's largely because of a system called "flexicurity" that gives employers the freedom to hire and fire, while the state supports laid-off workers with generous benefits and retraining.

"We have a very dynamic, innovative business sector, but it is facilitated and enabled by strong public institutions," says Lars Bo Kaspersen, director of the Center for Business and Politics at Copenhagen Business School.

Kaspersen says the current crisis will test the Danish flexicurity model, which is admired by other EU nations. Danes and other Europeans say they have faith in their social welfare systems. But there is a realization across the EU that sacrifices must be made to preserve the European social model.

Few Europeans seem to want an American-style, mostly private, system. Europeans looked on in horror when American retirees lost their life savings in collapsed pension funds, and the unemployed lost their houses and health care.

So Europeans are doing their best to keep their system afloat.

Undermining One Of The EU's Three Pillars

Jacques Attali, an economist, scholar and author, is advising the French government on ways to curb health care spending.

"We may be very proud of our system, and we have not the slightest intention to change it, and we can afford it. What we have to do is just to have small adjustment of 1 percent of our GDP; 1 percent of our spending is not a lot of money. We will do it," he says.

But with aging populations and sluggish economic growth, not everyone is so sure. The European Union, people say, was built on three pillars: peace, growth and a shared social vision. If one of those pillars collapses, how long will the other two remain standing?