Accessibility links
'Original Grandparents,' Full Of Time-Tested Advice Harry and Barbara Cooper, also known as the "original grandparents" -- or OGs -- are in their 90s, married 72 years and still in love. On their website, Barbara and Harry offer their opinions, wisdom and uncensored wit in videos like Ask Grandma Anything. 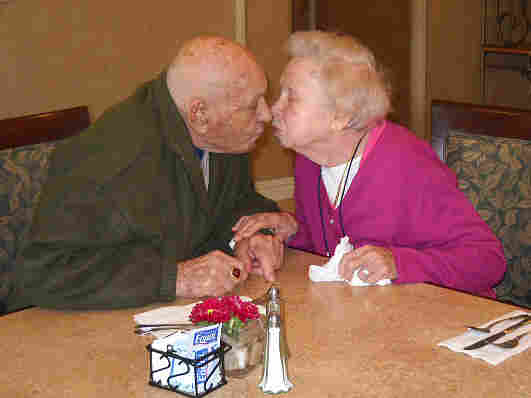 Harry and Barbara Cooper, married 72 years, are both in their 90s. On their website, The OGs, they offer charming advice, wisdom and uncensored wit about relationships and love. Gloria Hillard/NPR hide caption

A California couple have become the unlikely stars of the family blog world. Harry and Barbara Cooper have a couple of thousand fans on Facebook and thousands more are visiting their website daily -- not bad for two love birds pushing the century mark.

At the Hollenbeck Palms retirement and nursing home in Los Angeles, they're simply known as Harry and Barbara. He's 98; she's 93. But to their thousands of Internet fans, they're the OGs, short for "original grandparents."

On their website, Barbara and Harry, married 72 years, espouse charming advice, wisdom and uncensored wit in featured videos like Around the Hood and restaurant reviews. Ask Grandma Anything is the most popular video blog -- and no subject is off limits.

In one video, a woman asks: "Hi -- I was just wondering what your position is on lesbians?" Barbara responds: "Just do your thing -- that's all." Harry says: "How do I feel about lesbians? Good luck to them."

Behind the sometimes shaky camera are the couple's granddaughters -- sisters Chinta and Kim Cooper -- who a couple of years ago became the primary caregivers to the aging couple. Kim says visits with their grandparents were hilarious.

Harry Cooper about his wife of 72 years

"We would just be laughing and going, 'Can you believe what just happened?' And then we would just get back to our lives and be like, 'What was that cute thing she said?' So that was part of the impetus to lock these moments in amber and keep them and share them -- and not lose them," she says.

It's rare when the small camera does not capture them kissing or holding hands. And it's not surprising most of their fans write in to ask about the secret of a long-lasting love affair. It's a subject they never seem to tire of.

It's a repartee delivered with show-business timing. When Harry said: "I couldn't keep my eyes off her," Barbara, her speech sometimes slurred by a stroke, quipped: "We didn't trust each other, so we had to keep an eye on each other ... not really, not really."

Kim Cooper smiles up at her grandmother and shakes her head.

"I never know what she's going to say," Kim says. "She's like the oracle because she doesn't stop to ponder. She has the answer. It's like she's been waiting for this question all her life." 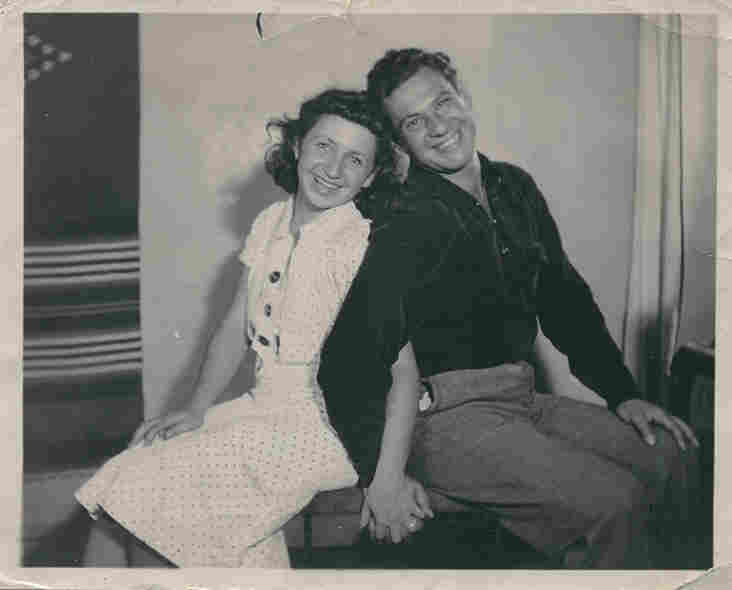 Barbara and Harry Cooper when they were young and recently married. Courtesy of the Coopers hide caption

toggle caption
Courtesy of the Coopers 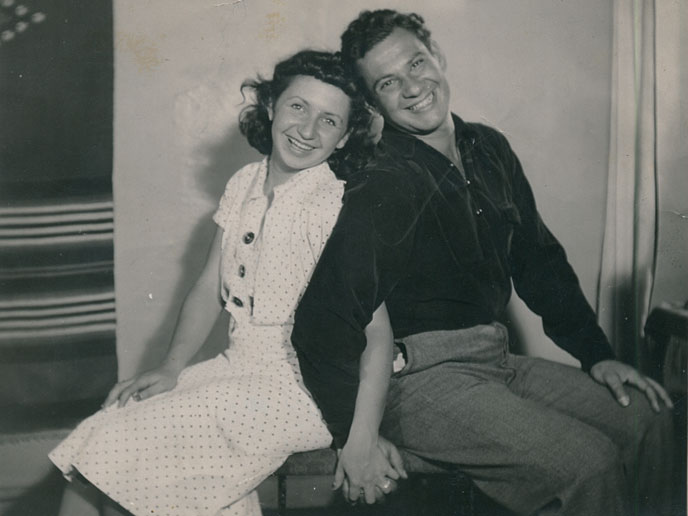 Barbara and Harry Cooper when they were young and recently married.

Courtesy of the Coopers

As Chinta gets ready behind the camera, Kim shuffles through the Ask Grandma Anything mail. The first letter is from a young woman concerned about her live-in boyfriend.

Kim reads from the letter: "I'm tired of doing his laundry, cleaning up after him ... and have no idea whether he's coming home at 5 p.m. or 5 a.m. Your wisdom please. Thank you."

From her armchair -- looking directly into the camera -- Barbara doesn't miss a beat. "Pack his suitcase and put it outside the door," she says.

And what about for a woman considering marriage who's getting cold feet? "Jump in with both feet -- you will not feel sorry," Barbara says.

The couple's biggest fans are the two who know them best, Kim and Chinta Cooper.

"We just sort of go through the world with our grandparents and live -- and it's nice," Chinta says.

And they know these days every moment is to be treasured. After lunch in the cafeteria -- Chinta sat down with her grandmother at the computer to help her answer her fan e-mail.

Chinta types, while Barbara dictates: "Thank you for writing us. We like hearing from you."