Accessibility links
The Summer Of Our Excess: Sport Gets Supersized Between the World Cup and Wimbledon and LeBron, sports fans might be a bit exhausted by all the supersized action. This summer has been a season of sports excess -- it even included a hot-dog-eating contest. 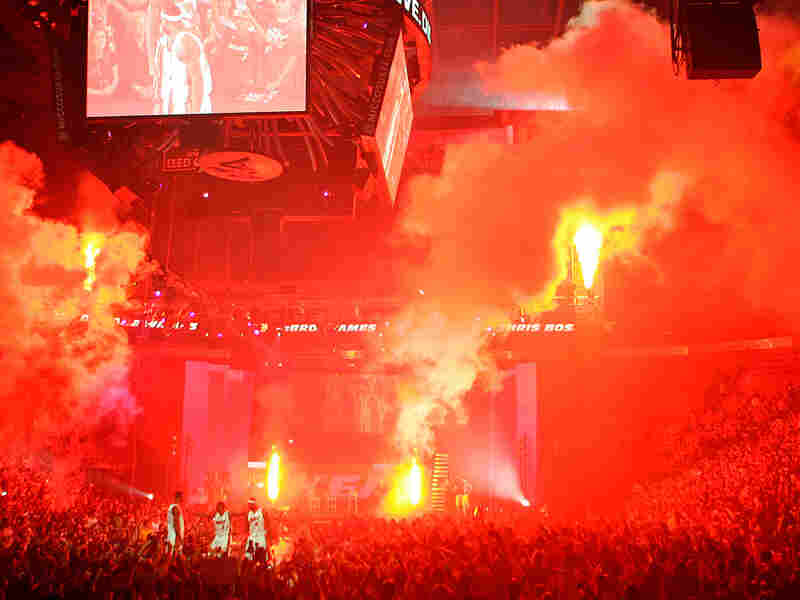 After LeBron James chose to move to the Miami Heat, the team arranged a fan-filled spectacle at its arena. Marc Serota/Getty Images hide caption 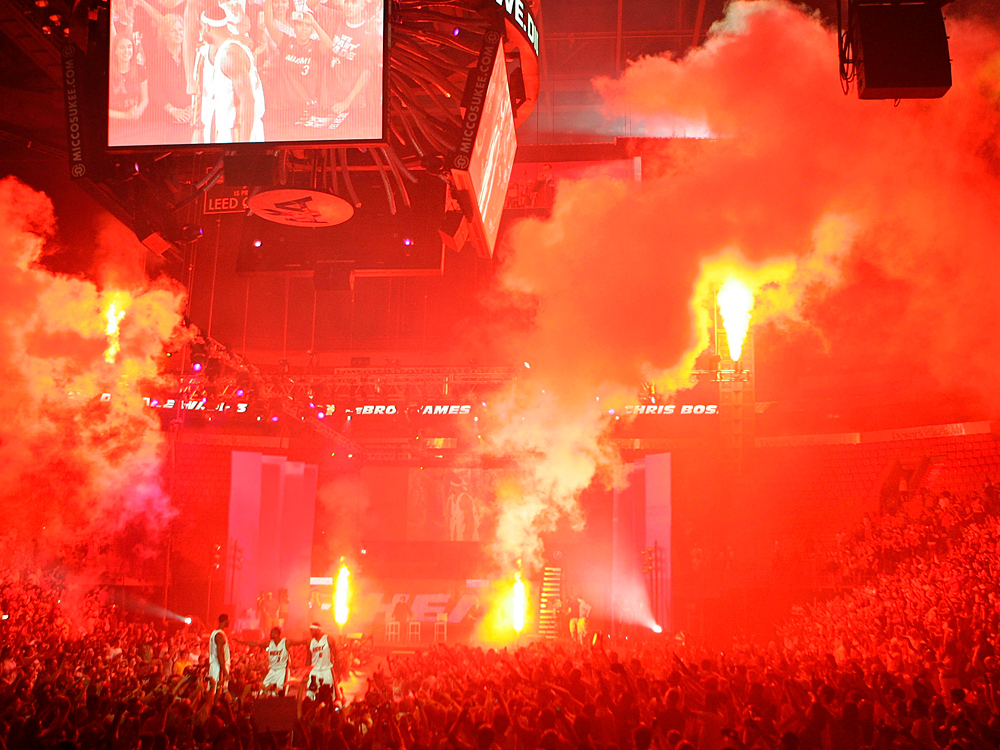 After LeBron James chose to move to the Miami Heat, the team arranged a fan-filled spectacle at its arena.

Now that those awful soccer horns have finally stopped blowing, could we please maybe all quiet down and perhaps just have some nice, subdued games? Good grief, has sports ever endured such a summer of excess? Everything has been overdone, overlong, over-emphasized, over the top. And, of course, most of it has been foisted on us, relentlessly, by the television network of which sports is now a wholly owned subsidiary: ESPN or, more accurately, ExcessPN.

It was ExcessPN, of course, which brought us, above all, the tackiest display of televised exploitation since Geraldo Rivera opened up Al Capone's secret vault to reveal ... nothing.

As LeBron James said so modestly: "I'm taking my talents and going." Has any immodest body -- politician, actor, artist -- who specializes in the excess business ever announced his departure by describing his leave-taking as a vast talent resettlement?

LeBron, don't forget to take your ego, too.

The Cleveland owner, Dan Gilbert, didn't help the situation by making some intemperate comments about James' departure. He was a Clevelander scorned, speaking out emotionally for a city that has suffered, literally, generations without championship.

Yes, his criticisms were way over the top. But what Gilbert made unnecessarily personal was not enough for the Rev. Jesse Jackson, who saw a way to stumble back into the headlines by wrenching racism into the caldron, saying that the Cleveland owner viewed James as a "runaway slave." Please. Talk about excess and runaway rhetoric.

And for unwanted international excess, Lance Armstrong has returned, bringing along all the new, more serious allegations against him, to help divert attention from the Tour de France itself.

Wimbledon's only highlight was that dreadful 70-68 set. Look -- yes, the two players get credit for surviving, and we got to vicariously enjoy a freak show on ExcessPN, but what such an endless exhibition really tells us is that games today last excessively long and must have a proper tiebreaker to end it. 70-68 is not natural; it is Botox tennis.

And, of course, there's the excess of sports stupidity. As the World Cup showed us repeatedly, the foolish old men who run every sport must accept technology -- and whenever a replay shows that a mistake is made by a referee, it must be corrected. Otherwise, if we know what we saw is different from what the score says, then sport is a fraud.

Finally, for simple, disgusting, all-around all-American excess, we were treated to the annual hot-dog-eating contest at Coney Island, televised, of course, on ExcessPN.

Some people miss the point. They ask: Is stuffing wieners in your mouth a sport? Rather, the question is: Is watching other people stuff wieners in their mouth a sign that we are just tired of too much real sport? Do you get the feeling sometimes that we all live our lives in a sports bar?