Accessibility links
U.S. Church Lends Help To Anti-Gay Ugandan Pastor Ugandan Rev. Martin Ssempa has become the face of Uganda's anti-homosexuality movement. He has organized anti-gay rallies and preaches that many homosexuals are pedophiles who deserve severe punishment, including death. In Las Vegas, a megachurch is giving money for Ssempa's cause. 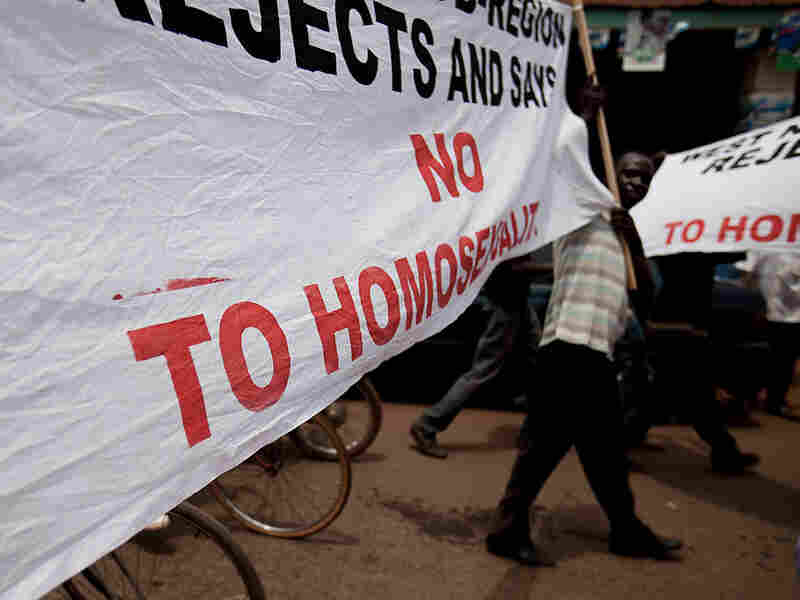 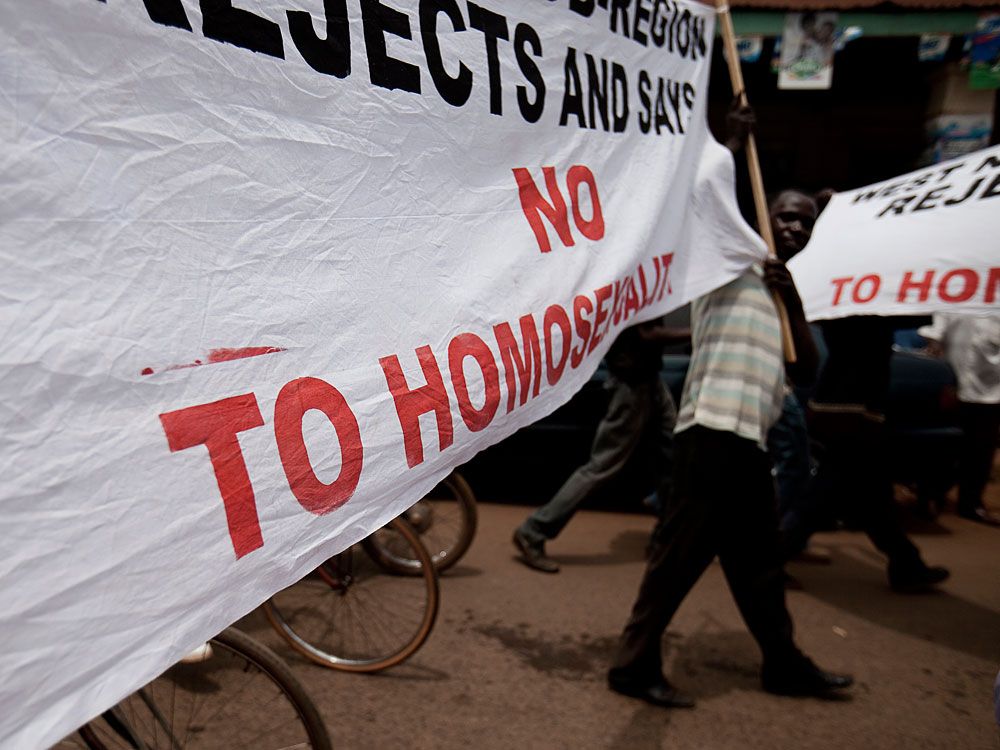 Ugandans take part in an anti-gay demonstration in Kampala in February.

Martin Ssempa, who pastors the evangelical Makerere Community Church in Kampala, has become the face of Uganda's anti-homosexuality movement. He has organized anti-gay rallies. He preaches that many homosexuals are pedophiles who deserve severe punishment, and he wants to ensure that "sodomy and homosexuality never sees the light of legality in this land of the people of Africa."

"This is sick, and it is therefore deviant," he told a large church crowd. "We do not want it."

He even shows hard-core gay pornography in churches and conferences -- images that, critics say, whip up sentiment against gay men and lesbians.

"Martin Ssempa makes no bones about going around to churches, to community centers, to different neighborhoods and saying things like gays and lesbians should be put in prison, they should be killed," says Michael Jones, a gay-rights activist in the U.S. who has been following Ssempa's activities.

Uganda's Anti-Homosexuality Bill -- which criminalizes homosexual practice -- is working its way through the legislature. President Yoweri Museveni has asked the authors to "soften" the bill -- but that hasn't happened yet. Among other things, the bill imposes the death penalty for gay sex with a minor, or having sex with your gay partner if you are HIV-positive. Two consenting adults can get life in prison. A straight person who knows someone is gay, and doesn't report it, could get prison time as well.

This is sick, and it is therefore deviant. We do not want it.

So why does Canyon Ridge Christian Church in Las Vegas -- a megachurch with some 6,000 congregants each week -- financially support Ssempa?

Kevin Odor, the senior pastor there, says Ssempa has been "misrepresented."

"His heart is not to kill people," Odor says. "He is a pastor of the Gospel that believes in redemption and his heart is to redeem people."

Odor says Canyon Ridge began supporting Ssempa's huge campus ministry, which preaches abstinence to college students, in 2007. Odor says he does not "personally" endorse the death penalty or life sentences for gay men and lesbians. Asked why he would support someone who does, he sighs.

"We want to help the AIDS problem in Africa, and we found somebody who is making a difference," he says. "So we support him."

Odor says in March -- after Canyon Ridge leaders talked to Ssempa -- the Ugandan minister reversed himself and now says he favors removing the death penalty from the bill, though he still wants to criminalize homosexuality. As recently as February, Ssempa told a television interviewer: "If you do not want the death penalty for pedophiles, what punishment do you want otherwise?"

Ssempa's turnaround satisfied Odor, and he sees no reason to condemn the minister. Nor does he think he should denounce the Anti-Homosexuality Bill.

"Why do we, as a church in America, need to say something about a bill in Uganda?" he asks.

What we have here is a church that wants to be viewed as moderate and outreach-minded and compassionate, and yet they're supporting a set of values and principles elsewhere that are very harsh and deadly.

Warren Throckmorton, a professor at the evangelical Grove City College

Odor says his church has "a heart" for homosexuals. He notes that Canyon Ridge participates every year in a march for people with AIDS, and for the past two years the church opened its campus for HIV Testing Day.

Warren Throckmorton, a professor at the evangelical Grove City College in Grove City, Pa., says Odor is trying to have it both ways.

"What we have here is a church that wants to be viewed as moderate and outreach-minded and compassionate, and yet they're supporting a set of values and principles elsewhere that are very harsh and deadly, frankly, to the very community you say you want to reach," he says. "If you preach compassion here, you have to support compassion elsewhere."

On Friday, the Southern Nevada Health District severed its ties with the church, saying it was "profoundly concerned" about the relationship with Ssempa. For his part, Odor says the church is only trying to help people with AIDS -- and because of that, he says, "we are being crucified."