Accessibility links
Movie Reviews - 'Inception' - A Masterpiece? Only In Someone's Dream Christoper Nolan's new sci-fi flick stars Leonardo DiCaprio as a man trying to extract and plant information in people's heads while they dream. Critic David Edelstein says the movie is "lumbering and humorous and pretentious, with a drag of a hero." 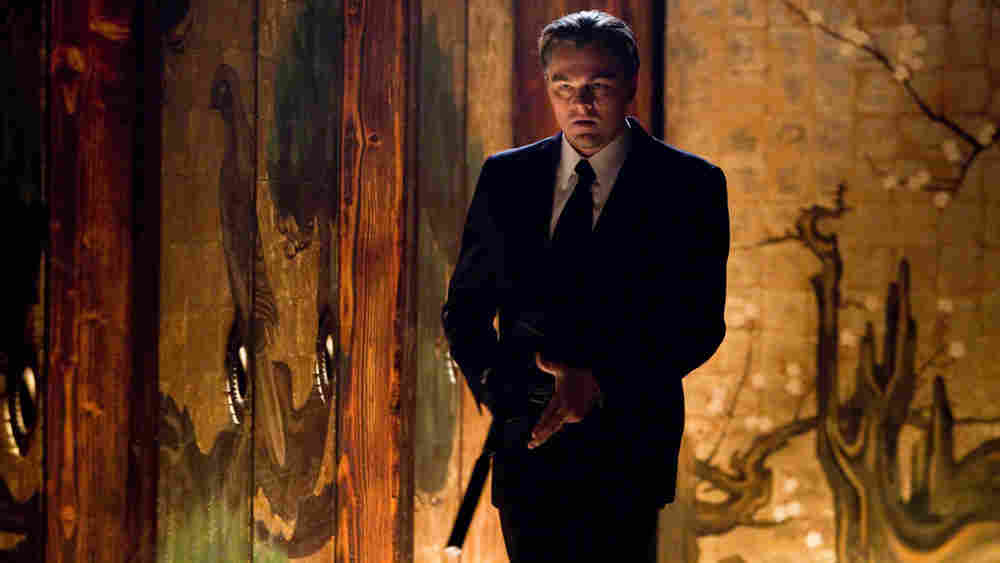 While You Were Sleeping: Leonardo DiCaprio plunges into people's minds while they sleep in order to extract corporate secrets in Christopher Nolan's sci-fi flick Inception. Warner Bros hide caption 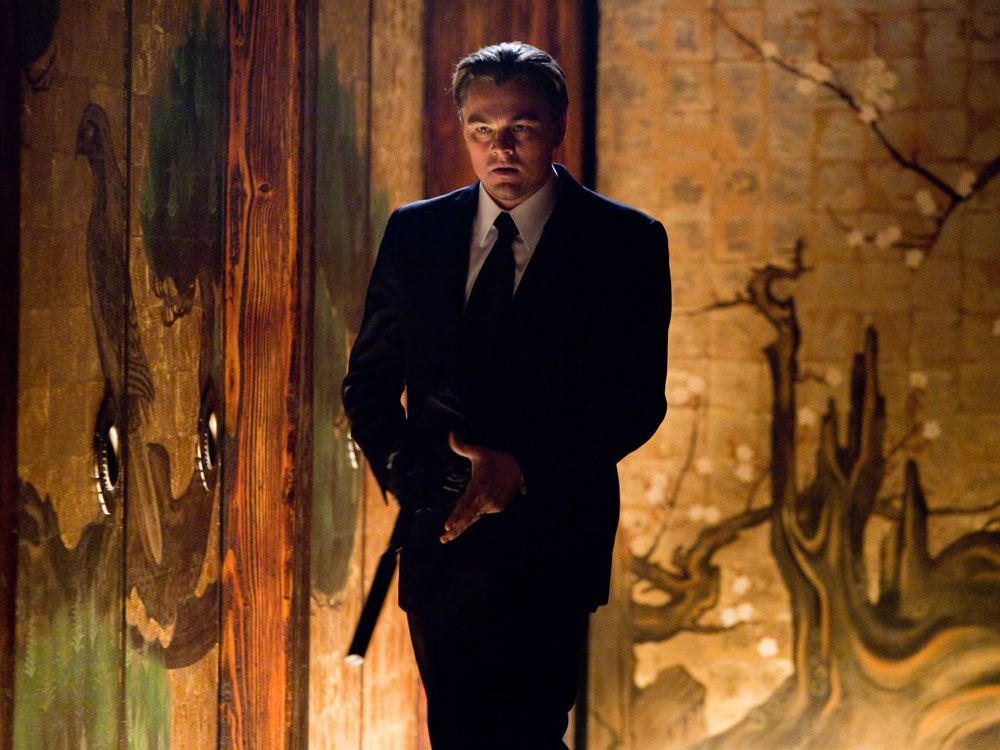 While You Were Sleeping: Leonardo DiCaprio plunges into people's minds while they sleep in order to extract corporate secrets in Christopher Nolan's sci-fi flick Inception.

Rated PG-13 for sequences of violence and action throughout.

'You Create The World Of The Dream'

In Christopher Nolan's Inception, Leonardo DiCaprio plays Dom Cobb, whose name sounds like it should evoke something -- a colleague suggests dummkopf, but I doubt that's the intention -- and whose specialty is plunging into peoples' minds while they sleep and extracting corporate secrets. His new client, a business titan played by Ken Watanabe, wants Cobb not to steal an idea but to plant one in a rival's head. That's called "inception," and it's believed, even in this futuristic world, to be impossible.

Frankly, I got hung up on that. Why should "inception" be harder than extraction? "The subject's mind always knows the genesis of an idea," one character explains, but that strikes my mind as dead wrong. I'm highly suggestible. I don't always know where my ideas come from.

But there's one thing I'm sure of: Inception doesn't all come from Nolan's head. It's a clunky mix-'n'-match of other mind-bending blockbusters like Mission: Impossible, Fantastic Voyage, Dreamscape and The Matrix, with some Freud and Philip K. Dick thrown in. It's not terrible -- just lumbering and humorless and pretentious, with a drag of a hero.

Cobb accepts the job of planting an idea in the mind of a man named Fischer (Cillian Murphy) because he longs to see his two little kids in the U.S. and is forbidden to return on account of a Crime To Be Revealed Later -- and his new client can make the legal problems go away. The best part of the movie is Cobb assembling his team, among them Joseph Gordon-Levitt as the point man. And Ellen Page's character, an architecture student named Ariadne, has two functions: dream-world designer and exposition magnet. She's the newbie, so Cobb has to explain how the science works.

It takes a lot of explaining.

"You create the world of the dream. We bring the subject into that dream, and they fill it with their subconscious," Cobb says, as the two share a drink at a cafe.

"How could I ever acquire enough detail to make them think that it's reality?" she asks.

Why it's OK when critics disagree:

'Inception,' Art, And The Impossibility Of Accounting For Taste July 15, 2010

"Well, dreams -- they feel real when we're in them, right?" he explains. "It's only when we wake up that we realize something is actually strange. Let me ask you a question: You never really remember the beginning of a dream, do you? You always wind up right in the middle of what's going on."

"Think about it, Ariadne. How did you get it? Where are you right now?"

"Are we dreaming?" she asks.

"You're actually in the middle of the workshop right now," he says. "This is your first lesson in shared dreaming." 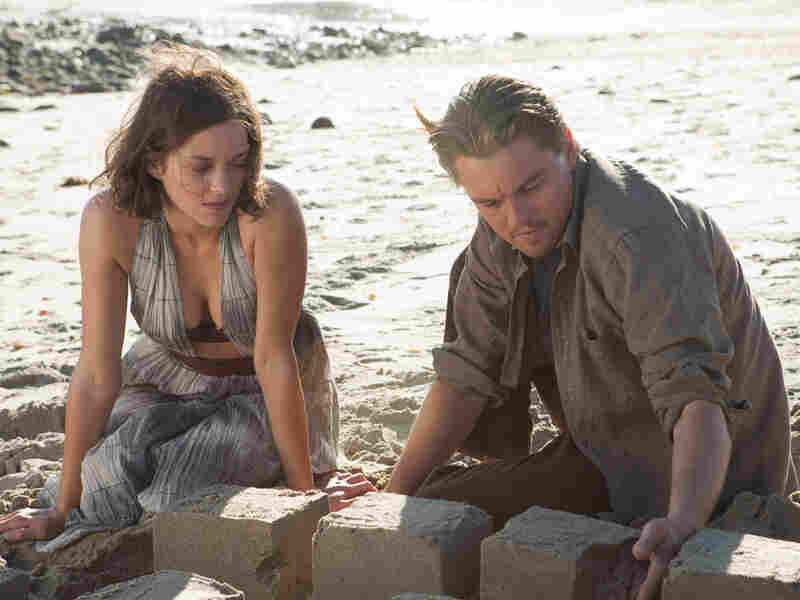 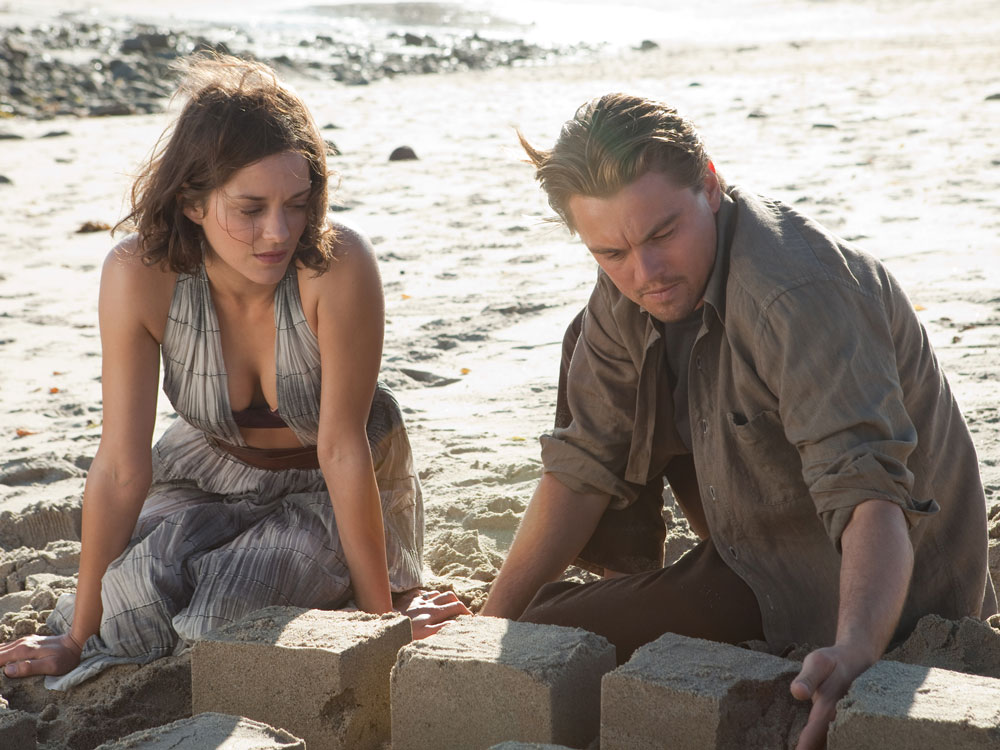 Mind Games: Oscar-winner Marion Cotillard (left) co-stars as DiCaprio's wife — and nemesis — in an action thriller that has layers within layers.

That's my favorite scene in Inception, because it ends with the dream city exploding in puffs of debris and the anticipation of magic to come. But Nolan thinks like a mechanical engineer. Instead of creating one dream that's really evocative, he opts for ordinary-looking dreams within dreams ... within dreams.

The gimmick lets Nolan have three clocks ticking down instead of one -- which should be killingly suspenseful. But he's too literal-minded, too caught up in his tick-tock logistics, to make a great, untethered dream movie. The tone is impersonal, the action disjointed.

There is a nice Freudian touch, a female saboteur who keeps popping up in Cobb's unconscious: his wife, Mal, played by Marion Cotillard. She has a great first scene, surveying her Mal-evolent handiwork with glittering eyes. But then the Mal subplot turns grim. She's the key to what eats away at Cobb, so as the team prepares to jump into the head of Fischer, Ariadne has to play therapist. "As we go deeper into Fischer," she tells Cobb, "we're also going deeper into you. And I'm not sure we're going to like what we find." Dialogue like that does nothing for an actress, and it's the only kind that Page gets.

Apart from Cotillard, the cast is colorless, including DiCaprio, who's often terrific but is weighing himself down with guilt-trip roles.

Look: I, too, wanted to surrender to Inception. But even with some amazing effects -- like a city that folds over on top of itself -- it never cuts loose the way The Matrix or Joseph Ruben's jolly B-movie Dreamscape did. If you're hoping for a thriller that will take you into another realm, well: Dream on.