Accessibility links
Interview: Leonardo DiCaprio on 'Inception' (And His Own Dream Life) Currently starring in Christopher Nolan's hallucinatory sci-fi drama Inception, the actor spoke with NPR's Michele Norris about finding a way through the film's many-layered dream world -- and what happened when that world found its way into his own dreams. 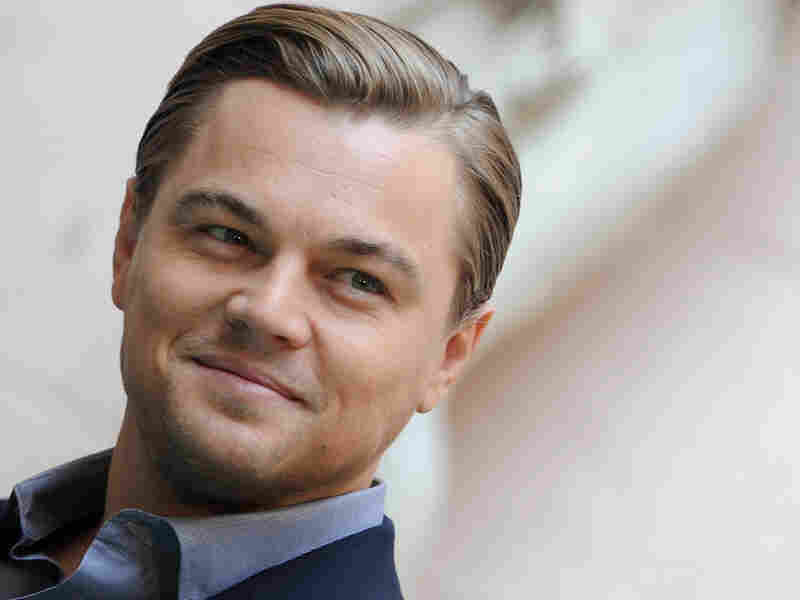 Still The King Of The World: DiCaprio has three Academy Award nominations and five Golden Globe noms — as well as one win, for The Aviator — to his name. Tiziana Fabi/AFP/Getty Images hide caption 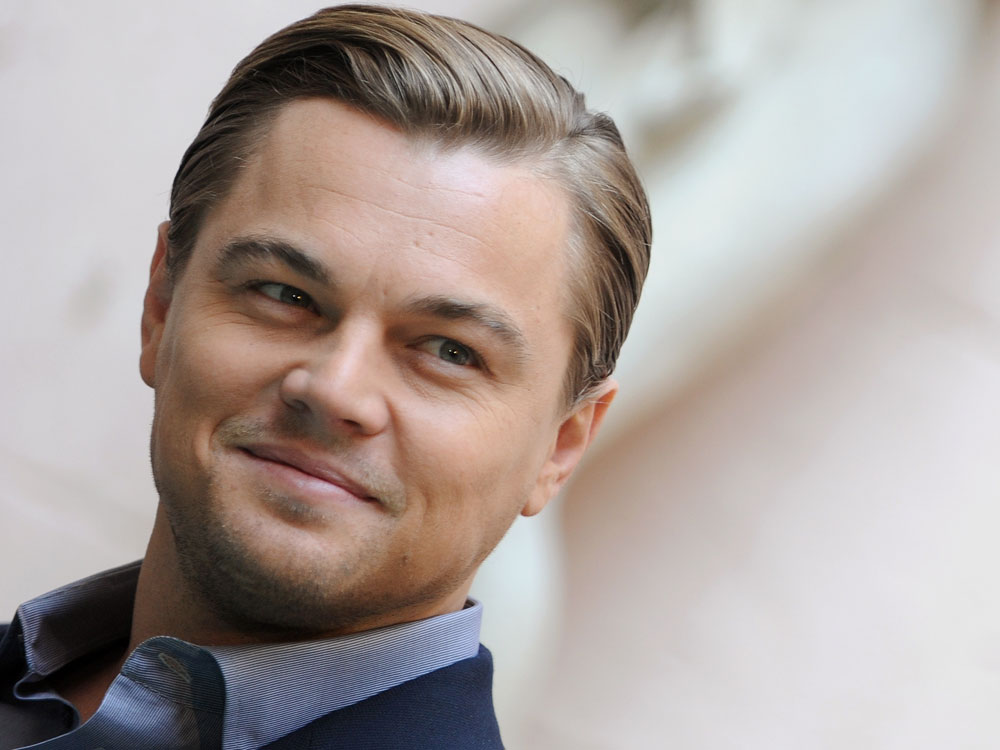 Still The King Of The World: DiCaprio has three Academy Award nominations and five Golden Globe noms — as well as one win, for The Aviator — to his name.

Leonardo DiCaprio's new movie, Inception, is many things -- but simple isn't one of them. Before the veteran actor began shooting the film, he and writer-director Christopher Nolan spent two months together, talking every day (and sometimes all day) about the world of the story.

According to DiCaprio, that level of prep work isn't unprecedented. He tells NPR's Michele Norris that "every great director" with whom he's worked has invited actors into the creative process very early on.

Nolan especially gave DiCaprio a lot to work with.

"He was very passionate, and very focused on creating this emotional, cathartic back story for Cobb," the troubled thief DiCaprio plays in Inception.

"So that led us to really delve deep into his past," DiCaprio says. "Because this story is set in the present, but there's obviously things from his past that keep coming about within the dreamscape."

I've never really questioned why I'm drawn to a certain piece of material, or [whether] I've done a specific type of genre before. I always look at them as unique experiences.

For those who (somehow) haven't heard: The much-ballyhooed Inception takes place in a world where bandits like Cobb can steal, or "extract," secrets from the minds of the rich and powerful as they dream, then sell them to the highest bidder. Via "inception," crooks can also insert new ideas into the subconscious. That means DiCaprio's character spends much of the film drifting in and out of different dream worlds.

"He's been to places that people in the waking world haven't experienced yet," the actor explains.

Besides his heavy-duty work with Nolan, DiCaprio also worked closely with his co-stars, Joseph Gordon-Levitt, Ellen Page and Marion Cotillard. "I've really never had conversations with other actors about scenes like I had on this film," he says. Cotillard, the Oscar-winning French actress who plays Cobb's late wife, Mal, was particularly helpful.

"Because not only is she an extremely talented actress, but she was really game for these types of strange, philosophical conversations about how to play a scene," DiCaprio says. 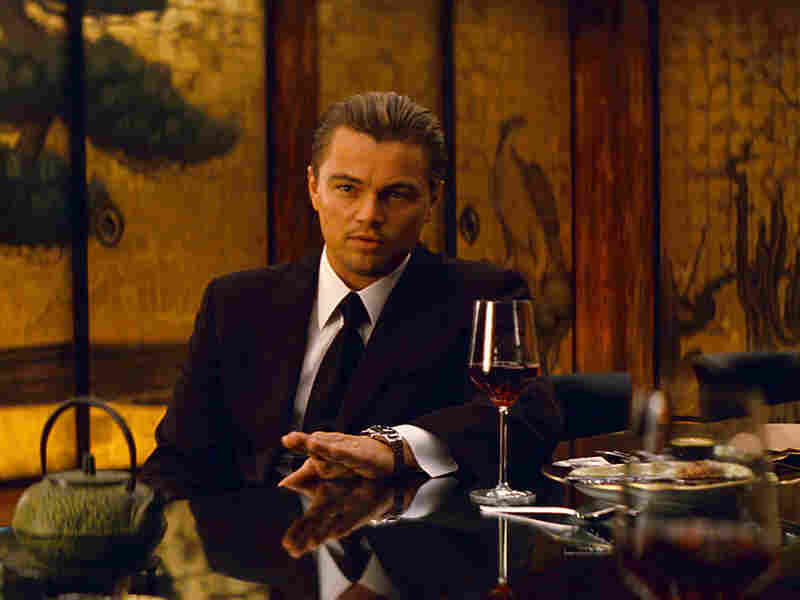 To Play A Thief: DiCaprio as Cobb, the criminal mastermind he portrays in Christopher Nolan's Inception. Warner Bros. hide caption 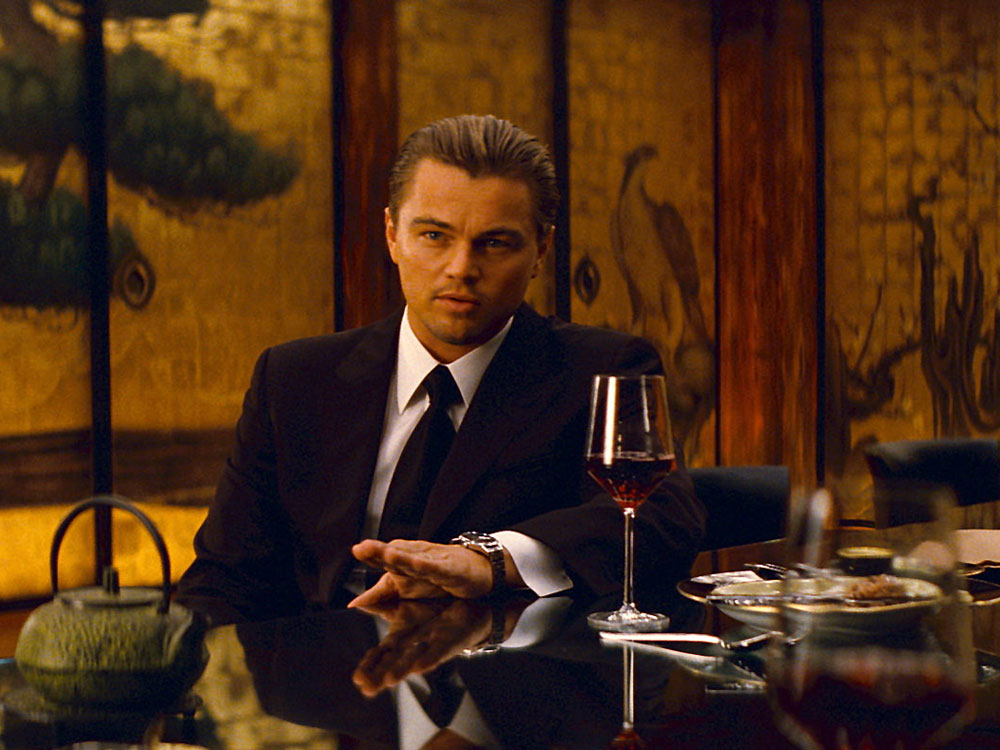 To Play A Thief: DiCaprio as Cobb, the criminal mastermind he portrays in Christopher Nolan's Inception.

'You Create The World Of The Dream'

Scenes in which, say, Cobb dreams of speaking to a therapist about having nightmares of Mal -- as a vision of Mal herself appears -- may look "like two characters just talking, and a third one listening," he goes on. "But it's this whole different set of rules and laws that applied within this insane world that Chris Nolan created."

That insane world is so powerful that it's even found its way into DiCaprio's own dreams. Though he says that in general, he's "not a big dreamer at all," recently the actor found himself traipsing the landscape of Inception while he slept.

"I entered the dreamscape and applied all the rules of Inception" to this dream, he recalls. "I knew I was dreaming, but I also didn't know that I had done this film, or [that] I was in a movie about the dreamscape. And I got to manipulate it from being a horrific nightmare into something quite positive."

Inception fits nicely into DiCaprio's recent body of work. Several of his most acclaimed characters -- Howard Hughes in The Aviator, Frank Wheeler in Revolutionary Road, Teddy Daniels in Shutter Island -- have been central to films that are, in one way or another, about the mind and a certain kind of madness.

DiCaprio names "the idea of a completely unreliable protagonist" as what drew him to both Shutter Island and Nolan's movie. But otherwise, he's not sure why he is attracted to this sort of twisting, cerebral film.

"I also can't help what I'm drawn to emotionally as an actor," he says. "I've never really questioned why I'm drawn to a certain piece of material, or [whether] I've done a specific type of genre before. I always look at them as unique experiences."

But there is one factor that DiCaprio always considers before deciding to take a role.

"I believe, you know, as history unfolds, certain films will disappear, and certain ones will stand the test of time," he says. "And you never know which ones those are. And you've just got to go for the opportunities of films you think might be memorable."

DiCaprio has learned this lesson after working in the entertainment industry for more than 20 years -- the 35-year-old started acting at 13 or 14, he says. And the life of a movie star can be lonely.

"I've gotten to go to far-off places in the world, have very unique, isolated, intense experiences for four or five months at a time, and then, kind of like a dream, those things disappear. You may see those people again, but it's never, ever going to be as intense as it was for that time period," he says.

Don't think the former heartthrob is playing poor little rich boy, though. In a way, he says, acting has "been like my therapy, because I get to go to places [emotionally] that I don't think I normally would."

And that, says DiCaprio, is a blessing: "I've been a pretty lucky man."