Accessibility links
Spain's Boom To Bust Illustrates Euro Dilemma Spain, the erstwhile "Iberian Tiger" and once the biggest creator of jobs among Europe's 16-nation single currency zone, is now struggling with a 20 percent jobless rate. It's stymied by the lack of a manufacturing base, an inequitable labor market and a limited social safety net. 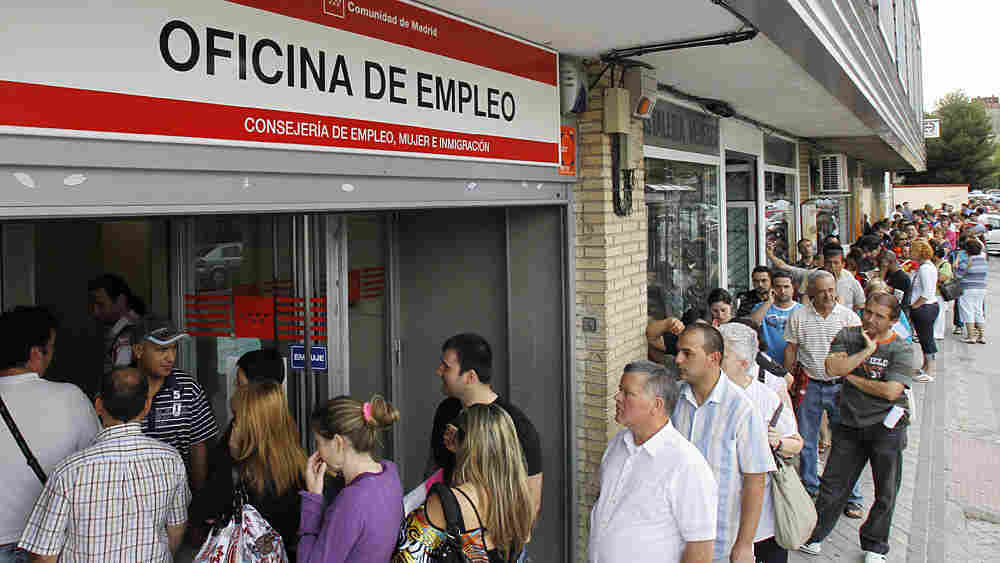 People stand in line outside a government job center in Madrid last month. After Spain adopted the euro in 1999, investment flowed into the country and the economy boomed. Now, it is suffering from the highest unemployment rate in the 16-nation eurozone and grappling with the way to recovery. Victor R. Caivano/AP hide caption 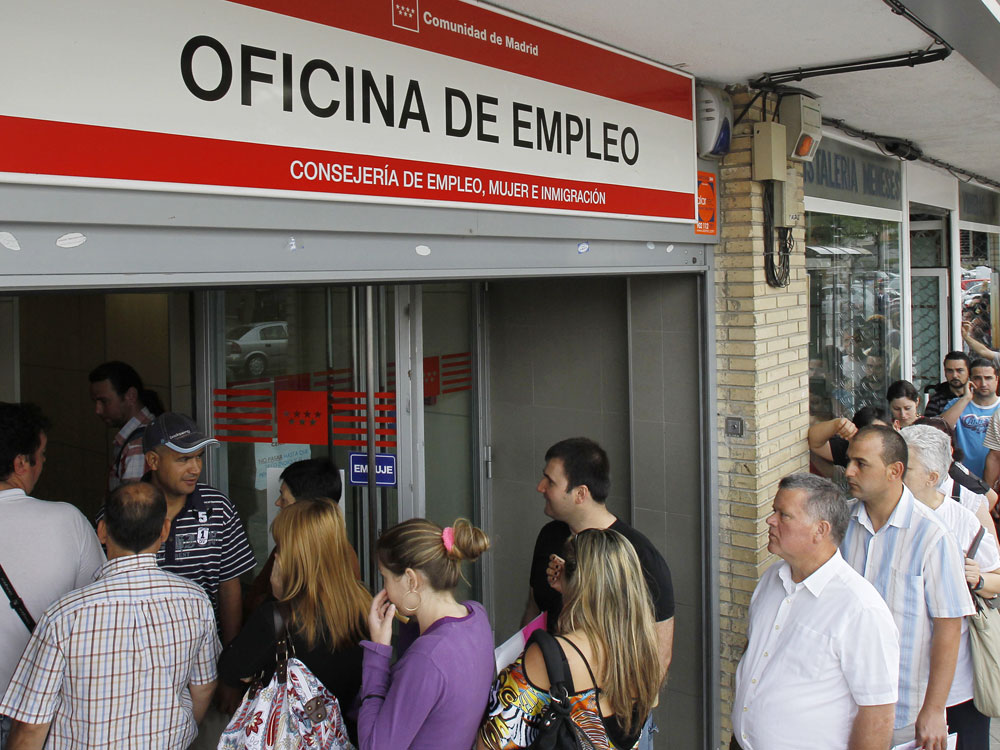 People stand in line outside a government job center in Madrid last month. After Spain adopted the euro in 1999, investment flowed into the country and the economy boomed. Now, it is suffering from the highest unemployment rate in the 16-nation eurozone and grappling with the way to recovery.

Until recently, Spain was the prosperous "Iberian Tiger," the biggest creator of jobs among Europe's 16-nation single currency zone.

But the global financial downturn dealt a devastating blow to Spain's once-vibrant economy, now struggling with a 20 percent jobless rate -- the highest in the eurozone.

As in other southern European countries that adopted the euro, it's a time of tough austerity measures and uncertainty about the future.

In the Moratalaz neighborhood in Madrid, lines start forming outside the local unemployment office at 7 a.m. -- two hours before the doors open. 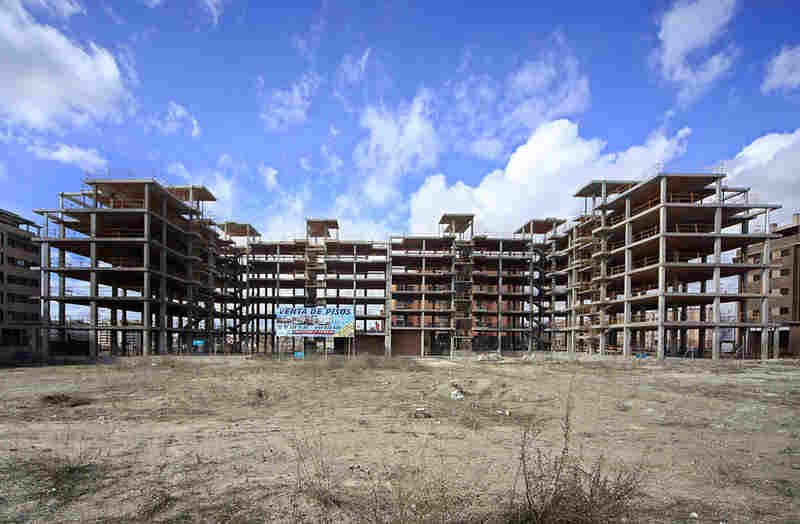 An unprecedented construction boom followed Spain's adoption of the euro. In 2006, Spain had more housing starts than the U.K., Germany, France and Italy combined. But the 2008 economic crisis burst the bubble; 2.5 million jobs have been lost since then. Arturo Rodriguez/AP hide caption

Gloria Morigosa, 30, is one of those waiting. She just lost her job as a secretary and says the situation is very hard. She blames consumerism.

"People who had not many financial resources spent a lot of money, more than they had; they asked for a lot of credits, and with the real estate boom they thought they could spend a lot of money," she says.

Prosperity And The Post-Euro Boom

Over the last decade, Spain was the European Union poster child. It had it all: great weather, the trendiest cuisine and movie stars like Penelope Cruz. It was all part of the boom that followed adoption of the single currency, the euro, in 1999 that was hailed as a major step in European unity.

For Spain, he says, construction and tourism were the major growth areas. "Sun and bricks, this is our industrial specialization," Dolado says.

Foreign capital flowed in, especially from Germany and the United Kingdom. Spain had a budget surplus for three years in a row and created 5 million new jobs.

The construction boom was unprecedented. In 2006, there were more housing starts in Spain than in the U.K., Germany, France and Italy combined. Spaniards were able to borrow money easily and many middle-class families bought second and even third homes. Cheap money brought a burst of self-confidence and a consumption binge.

But the economic crisis in 2008 burst the bubble, and 2.5 million jobs have since been wiped out.

Spaniards found themselves with more than 1 million unsold new housing units and no manufacturing base to fall back on.

Nowhere is that more obvious than at the household appliance floor of Madrid's big department store, El Corte Engles. A glance at the display shows just about all the products are German: Bosch, Siemens, Miele, Smeg, AEG.

Dolado says that before it adopted the euro, Spain, like many other countries on Europe's periphery, never had a strong export industry. But it could sell its products easily abroad by devaluing its local currency.

With the euro, that's no longer possible. And so, while southern Europeans focused on untradeable goods, such as housing and services, they lost competitiveness while heavily industrialized and efficient Germany became the biggest exporter in Europe. 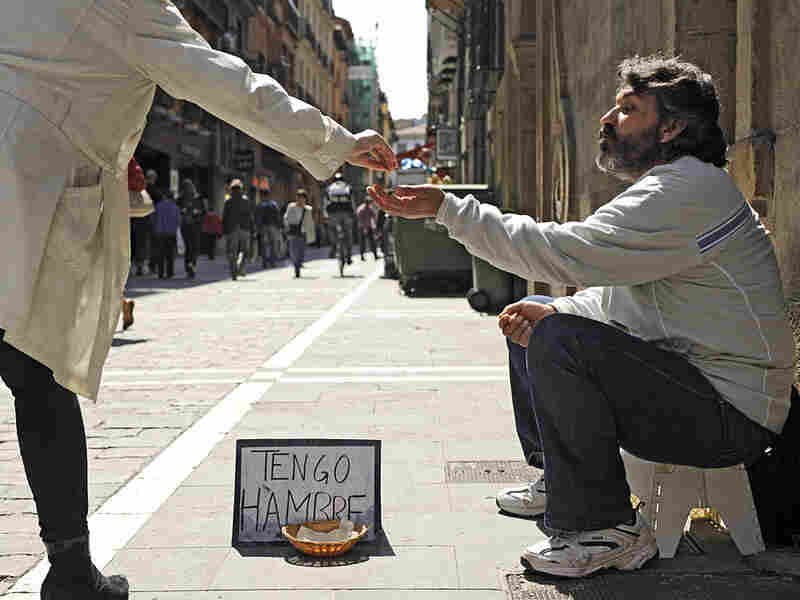 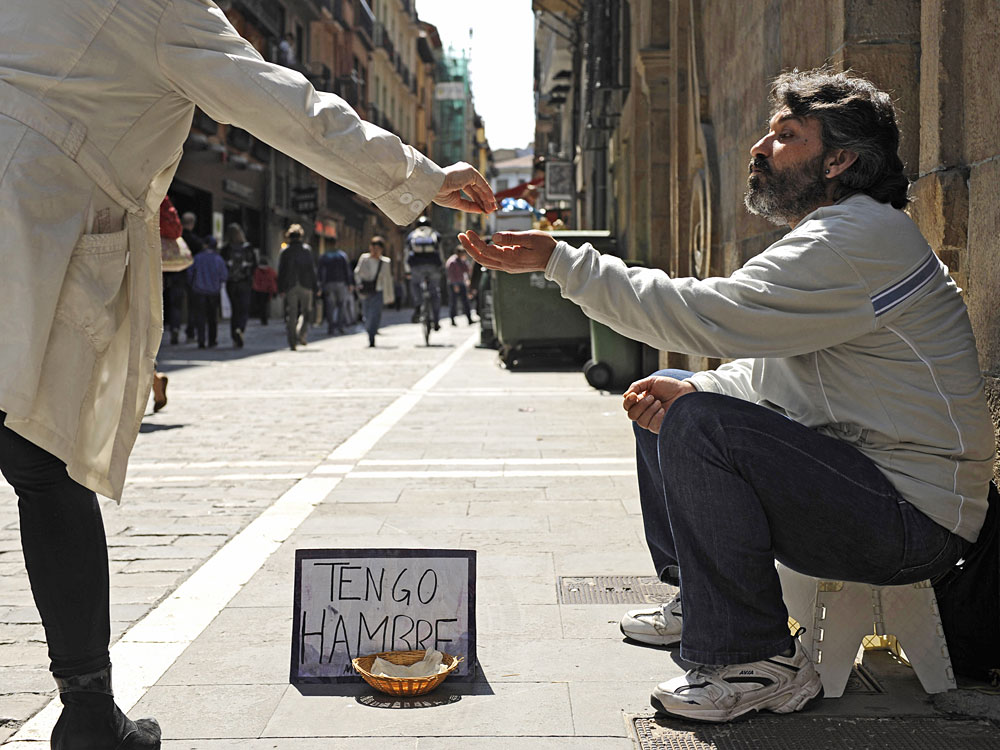 Jesus Torres, a 41-year-old unemployed construction worker and father of two, receives help from a passerby in Pamplona, Spain, in April. His sign reads: "I'm hungry."

"So the rest of the countries lost ground, they couldn't export so much, they incurred big current account deficits, etc.," Dolado says.

The European Union has so far been unable to establish a unified fiscal policy to control its unified currency, with each country following its individual financial policies. And national debts have ballooned, now threatening the euro's stability.

In response to the crisis, EU countries have announced radical budget-cutting measures. Spain aims to cut more than $18 billion over two years by freezing all pensions paid for by the state and cutting civil servants' pay by 5 percent.

The International Monetary Fund is also demanding a radical overhaul of the Spanish labor market. Spain has a two-tier system -- as do Italy, Greece and Portugal -- where full-time employees enjoy nearly job-for-life guarantees, while a second-class group of workers, mostly poorly paid young people, have short-term contracts with few or no benefits. The IMF wants a more equitable system that brings more young people into the regular job market.

In Spain they're called the "ni ni," or "nor nor," generation -- they have neither money, nor homes, nor careers. Unemployment among Spain's youth tops 40 percent.

On a recent day, a group of young men gathers at a youth center in a working-class section of Madrid. The place is sparsely furnished -- a large table, a few chairs, not much else.

Like most Spanish youth, they live with their parents. It's a system called the "cushion" – the unofficial safety net for the younger generation.

"We all want to be independent and have our own place. But the conditions don't exist. We cannot dream of renting a room with five other people," Rivas says. "We just can't afford it."

Spain's construction boom attracted large numbers of young men -- 30 percent even dropped out of high school in order to start making money. Most of them are now jobless.

Manuel Rodriguez, 20, is the only person in the group still studying at university.

"Today a degree doesn't mean a thing, it doesn't guarantee you a job, it doesn't matter if you study or not. I certainly feel like I'm part of a lost generation," Rodriguez says.

Across southern Europe, this lost generation has trouble entering the job market, has insecure jobs with few chances of improving skills, and has to postpone starting a family.

A recent Spanish newspaper headline -- "From Baby Boom to Baby Crash"-- announced that Spain's birth rate had dropped 5 percent in 2009 over the previous year.

No Country For Young Men

Today's young will be carrying the burden of an aging society.

Sociologist Antonio Lopez Pelaez says Spain, like other Mediterranean countries with low birth rates, is no country for young men.

"The welfare state in Spain focuses on health and the elderly. It's families that support young people, and there are more resources for the elderly than child care centers," Pelaez says.

This is the trend throughout the eurozone countries in southern Europe, where patriarchal societies still predominate. Majorities of young people -- up to 34 years of age -- still live with their families.

In Portugal, youth unemployment, as in Spain, is twice the national average. And in Italy, 2 million young people between ages 15 and 29 did not work or study in 2009, making it the European country with the highest number of inactive youth.

Dolado, the economist, says if southern Europe is to remain a player in the European Union, it must learn from its northern partners, where there is good job training for the unemployed and young people.

"What we must do is just lower protection of incumbents and increase opportunities of the youngest. Education and labor market are the two key reforms this country needs. The power is in the brain these days, not any longer in the hands as it used to be in the past," Dolado says.

But the path to recovery and growth will be long and difficult. And the legacy of having adopted the euro -- a straightjacket for many on the European periphery -- could prove to be a hardship for an entire generation.