Accessibility links
Obama-Hitler Billboard Covered Up In Iowa A Tea Party group compared the president to Hitler and Lenin, saying he's another socialist. Some members criticized the sign, which only went up last week, and the group's co-founder acknowledged that the pictures overwhelmed the intended message of anti-socialism.

Obama-Hitler Billboard Covered Up In Iowa

Obama-Hitler Billboard Covered Up In Iowa

A billboard in Mason City, Iowa, created by a conservative Tea Party group comparing President Obama to Adolf Hitler and Vladimir Lenin has been removed. 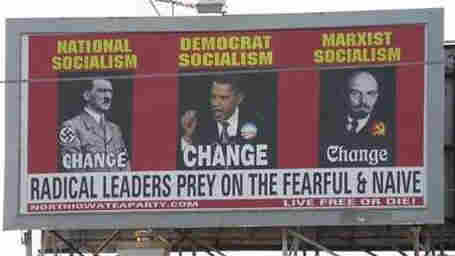 Before being covered up. AP hide caption

Kent Beatty, the general manager of the company that owns the downtown billboard, says a North Iowa Tea Party representative called Tuesday night and asked that the sign be covered over. Beatty says his company replaced the sign Wednesday morning with a public service announcement.

The sign only went up last week, but quickly drew attention in the news media and on the Internet. It is the latest in a series of anti-Obama billboards that have popped up around the nation in recent months.