Accessibility links
Tea Party: It's Not Just Taxes, It's The Constitution The Tea Parties started as an anti-big government, anti-tax movement -- T-E-A stands for "Taxed enough already?" But Tea Partiers have another pressing concern -- an obsession, really -- the United States Constitution. And they believe the Constitution is being subverted by President Obama and the Democratic Congress.

Listen
Tea Party: It's Not Just Taxes, It's The Constitution 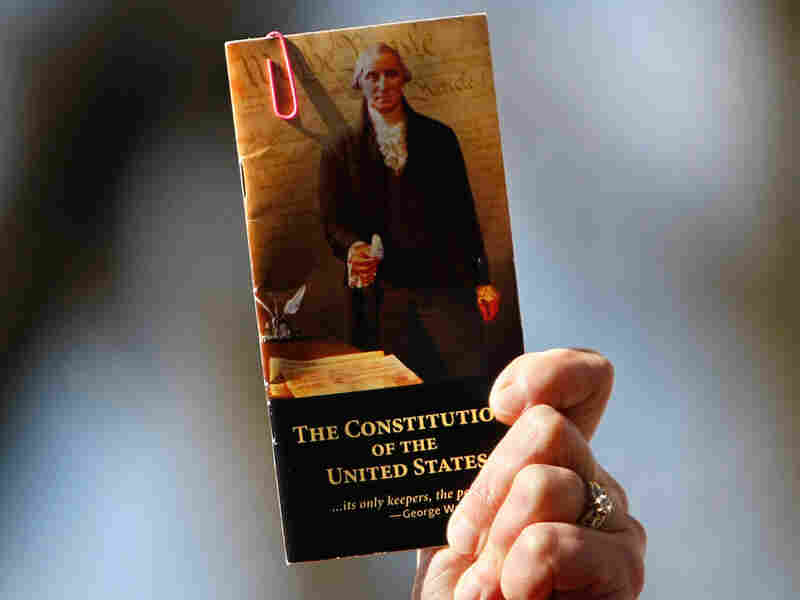 A demonstrator holds up a pocket-sized copy of the U.S. Constitution during a health care rally organized by The American Grassroots Coalition and The Tea Party Express on Capitol Hill in March. Gerald Herbert/AP hide caption 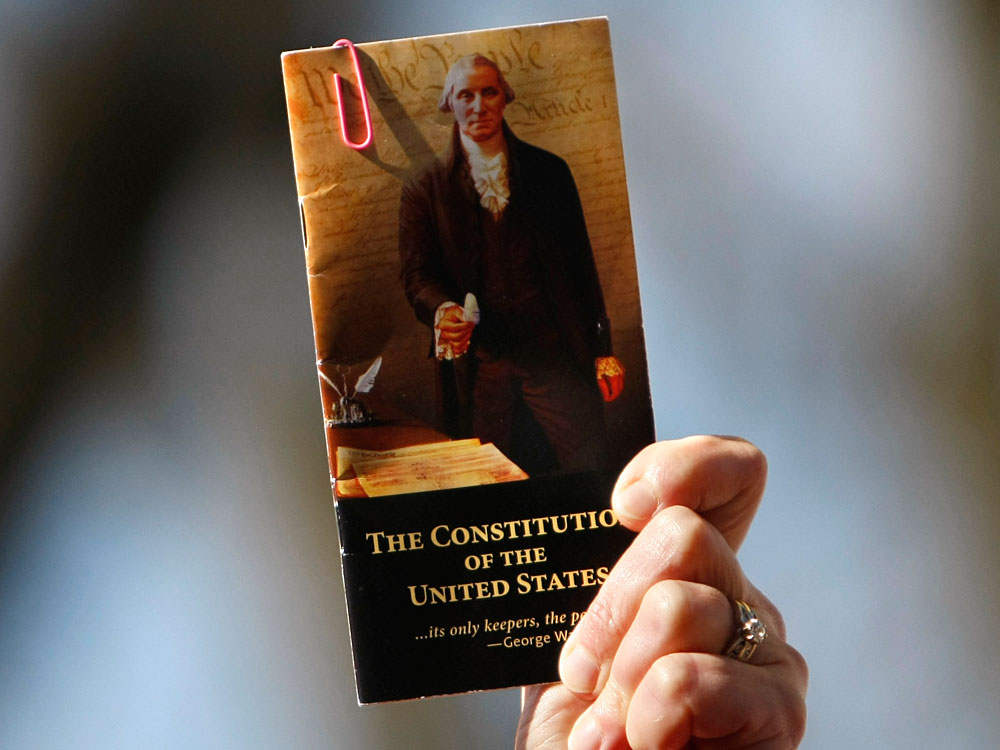 A demonstrator holds up a pocket-sized copy of the U.S. Constitution during a health care rally organized by The American Grassroots Coalition and The Tea Party Express on Capitol Hill in March.

On a sweltering night in Manassas, the Virginia Tea Party Patriots are holding a rally.

"The theme tonight is defending the Constitution -- we are revisiting what were the fundamental principles that made this nation great, that makes Virginia great," an organizer tells the crowd.

The Tea Parties started as an anti-big government, anti-tax movement -- T-E-A stands for "Taxed enough already?" But Tea Partiers have another pressing concern -- an obsession, really -- the United States Constitution.

Along with the "Don't tread on me" flags and the George Washington impersonators, the Constitution is ubiquitous at Tea Party events, whether it's reproductions of the original parchment or pocket-sized copies.

Karen Cole says she carries a copy in her purse. "The Democrats are eviscerating our Constitution," she says. Her friend Betty Anne Olsen agrees. "This current administration is trashing our Constitution; they couldn't care less about the values. They're breaking the laws."

And how does she know that?

'The Biggest Weapon That We Have'

Tea Party members are often vague about exactly how their constitutional rights are being denied. But they all believe the federal government has expanded far beyond what the Constitution intended.

Others focus on the 10th Amendment and claim that states' rights are being trampled, which leads others to call for repeal of the 17th Amendment -- the one that took power away from state legislatures to choose U.S. senators. And Tea Party candidates like Nevada Republican Senate hopeful Sharron Angle pay particular attention to the Second Amendment.

"I feel that the Second Amendment is the right to keep and bear arms for our citizenry. This is not ... for someone who's in the military, this is not for law enforcement, this is for us," she told a talk radio host. "And when you read the Constitution and the Founding Fathers, they intended this to stop tyranny. This is for us when our government becomes too radical."

Even if you're not calling for armed insurrection, invoking the sacred text of the Constitution gives a political argument more authority, says Columbia University law professor Nate Persily. "When you start phrasing your objections in constitutional terms, you are lodging sort of the biggest weapon that we have in American political discourse," he says.

Not every Tea Partier is a birther, of course, but the birthers do make the ultimate constitutional argument -- the false charge that Obama himself is unconstitutional because he wasn't born in the United States.

This isn't the first time the Constitution has been invoked by a social movement. Abolitionists, feminists, Dixiecrats and the civil rights movement have all appealed to the Constitution, says Akhil Amar, who teaches law and political science at Yale.

"Dr. Martin Luther King actually says, 'I'm here to redeem the Constitution, it actually does say equal, and we're not doing equal,' " Amar says. "And now we're seeing a populist movement on the right, and both of them are claiming a constitutional legacy."

But these days, says Amar, the grass-roots debate over the true meaning of the Constitution is a little one-sided. "I think it's a mistake for folks on the left to concede the Constitution rather than claim it as their rightful inheritance," he says. "If one side is claiming it, and the other side is not, I think that the side that claims it has a huge advantage in the culture wars."

That's because what the public believes the Constitution means matters -- and sometimes it can influence how the Constitution is interpreted by the Supreme Court, says Larry Kramer, the dean of Stanford Law School and the author of a book about popular constitutionalism.

"It would be rather peculiar to say that, in a democratic society, it's too important for ordinary people to have any say in what it means or how it applies," he says. "So you always want engaged public debate over the meaning of the Constitution in order to keep it contemporary and in line with where the country is."

Today, Kramer says, the Tea Party is giving a big grass-roots boost to the elite conservative legal movement, whose views of the Constitution are already well-represented on the Supreme Court.

"Right now, four and probably five of the justices are much more sympathetic to the Tea Party view of the Constitution than they are to the Obama administration view," he says.

With more than 20 states currently pursuing legal challenges to the new law requiring individuals to have health insurance, the Tea Party views on that issue will eventually have their day in the highest court. But until then, the Virginia Tea Party Patriots and others like them will keep pushing their case in the court of public opinion.