Accessibility links
In Europe, Obstacles To A More Perfect Union The creation of the European Union and the advent of the euro currency have done little to dampen fierce nationalism across the continent. NPR concludes its series on Europe with a look at whether the euro, and the notion of European unity, can survive. 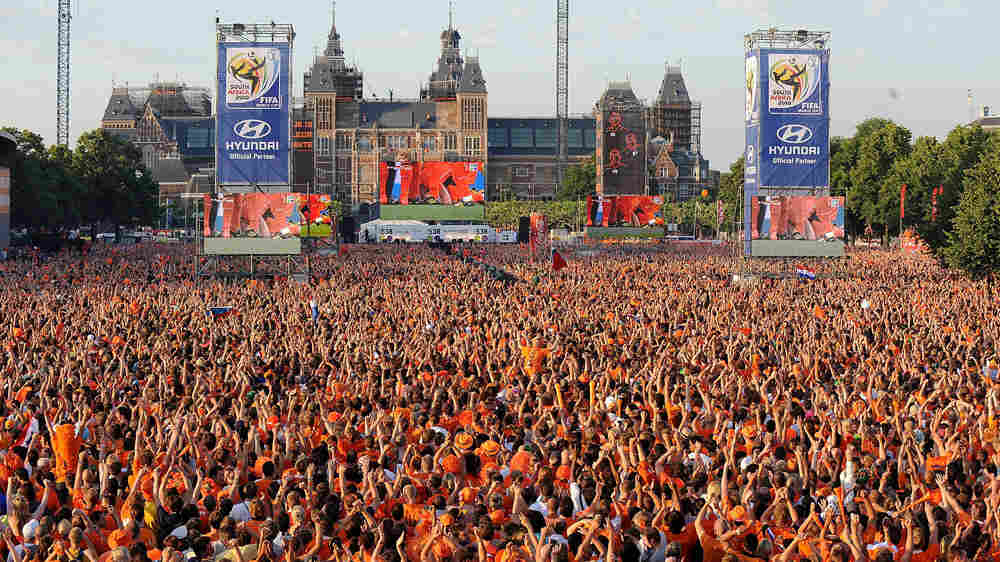 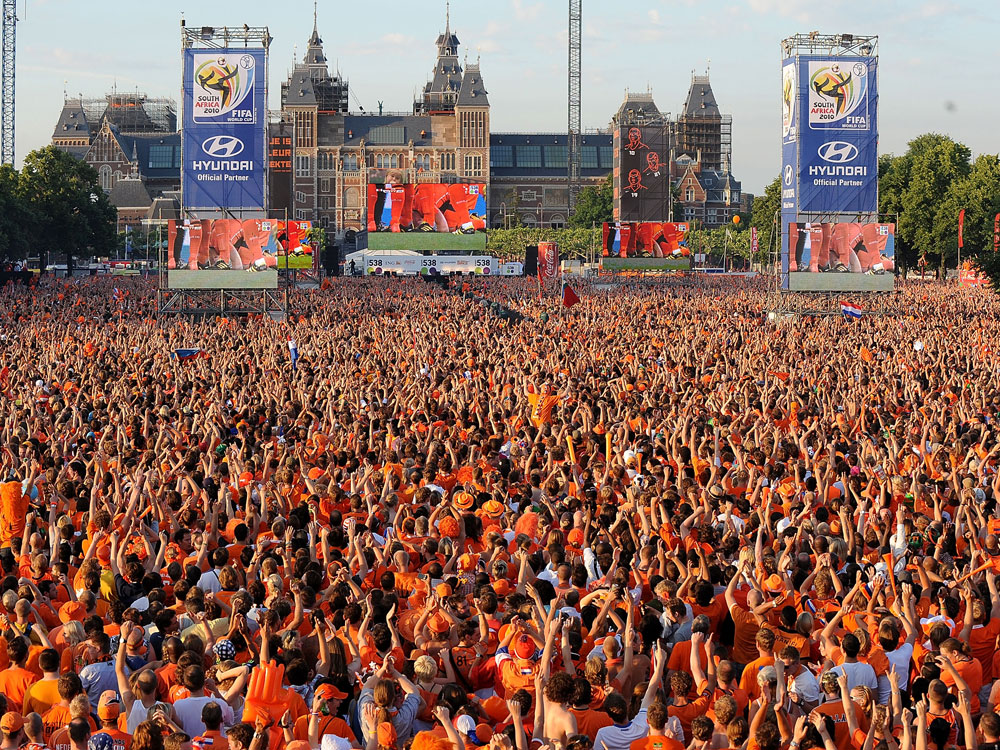 Dutch soccer fans watch the 2010 World Cup final July 11 between the Netherlands and Spain on large screens near the Rijksmuseum in Amsterdam. Fierce nationalism remains a major barrier to greater EU integration.

If you want to understand why the euro is having so many problems, you don't have to look at complex details of fiscal policy or the ups and downs of a united monetary policy.

For the last month, as the World Cup unfolded in South Africa, fans filled the public squares of ancient European capitals.

In the center of Amsterdam on July 11, thousands of people draped in the orange colors of the Dutch soccer team crammed into bars and public squares to watch their team in the World Cup final.

They shouted, they roared and they chanted the sort of fiercely nationalistic songs that outsiders might associate with less peaceful times on the European continent. And if you ask them about their identity, they have no doubt. 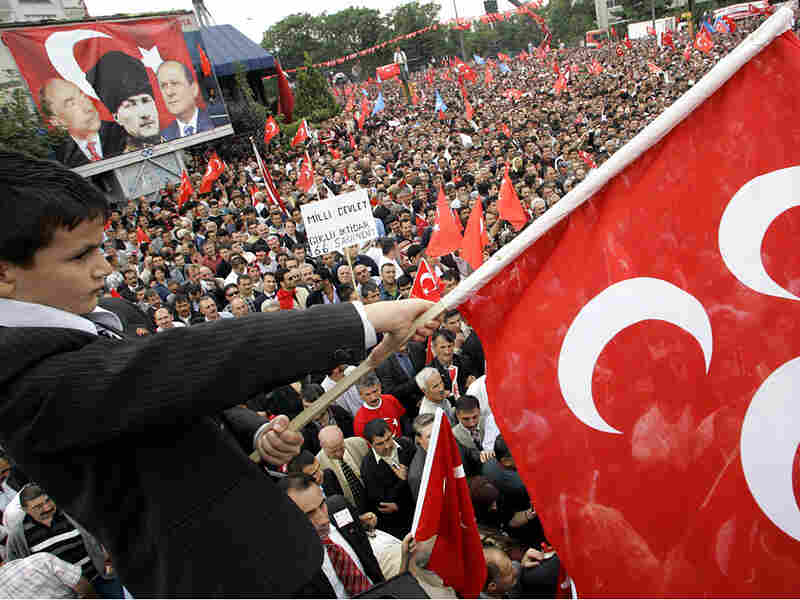 A Turkish boy holds a flag of the far-right Nationalist Movement Party during an anti-EU rally in Ankara, Turkey, in October 2005. Turkey's application for membership into the 27-nation European Union is pending. Murad Sezer/AP hide caption 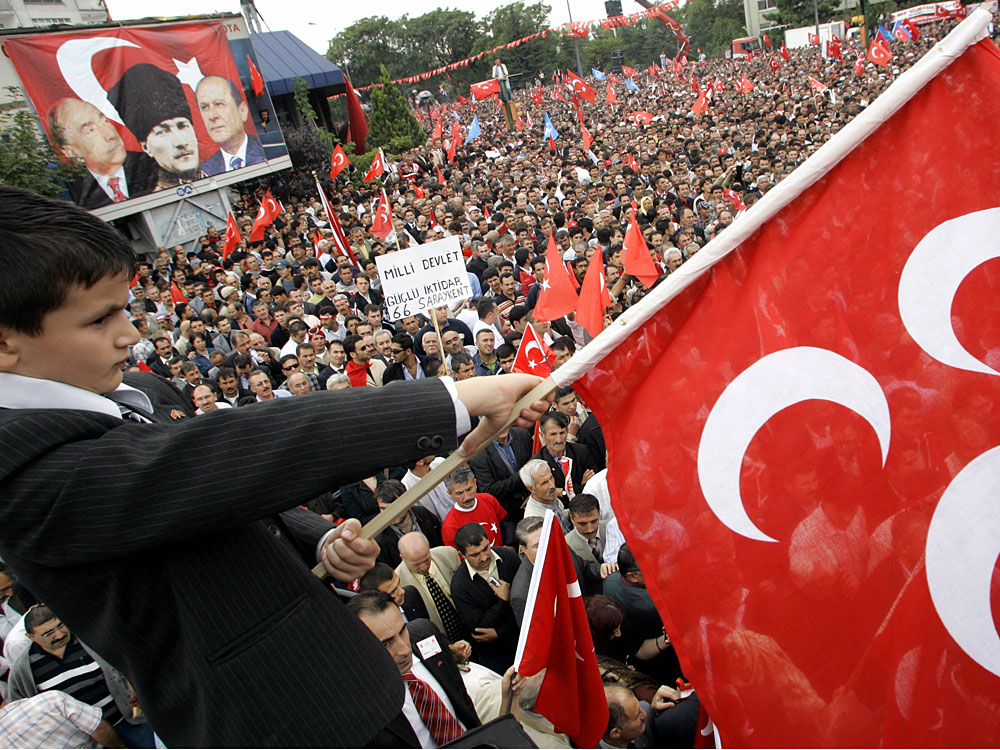 A Turkish boy holds a flag of the far-right Nationalist Movement Party during an anti-EU rally in Ankara, Turkey, in October 2005. Turkey's application for membership into the 27-nation European Union is pending.

Dunker was 14 when the Netherlands gave up its currency, the guilder, and adopted the euro currency, and so has known only the euro throughout his adult life. He doesn't have an issue with using the euro at all.

"With the money, that's not a problem. But if membership of the EU changes the culture, then it's a problem," he said.

Dunker said EU regulations are already starting to make Holland change, as the EU in Brussels tries to enforce its standards on all of the 27 member states.

"We don't want that," said Dunker. "That will cause us to lose our identity, and that's a bad thing."

Eleven years of the euro currency -- which has now been adopted by 16 of the 27 EU members -- and decades of the European Union itself have done little to dampen the fierce nationalism that contributed to so many wars in the past. Neither has it persuaded citizens of European countries to become more European, and less Dutch or German or Irish.

The battles may now be confined to the soccer field, but across the continent, ordinary people are still expressing doubts about moving toward a more political union -- a United States of Europe -- as well as an economic one.

It would be an immense parting of the ways for Europe and a demolition of the European ideal.

David Marsh, a banker, on the potential impact should the 16-nation single currency eurozone break apart

It turns out that it takes more than a few EU treaties and a new currency to overcome centuries of nationalism.

The soccer fan, Dunker, highlighted the second problem, too.

"Our tax money is going to Europe instead of our own countries. It's going to countries like Greece and Portugal. We pay for their mistakes," he said.

In a fully federal system like the United States, citizens can vote for different candidates with different policies on taxation and redistribution of federal tax money. That's not the case in the European Union: Dutch or German voters can't vote for Greek politicians who set Greek economic policy, even though those Greek politicians make decisions that have an impact on German taxpayers' money.

Greater Integration Not In The Cards, For Now

Since the crisis and the threat of the euro's collapse, some EU bureaucrats in Brussels say the only answer is to pursue greater EU integration in financial areas. At the moment, the European Central Bank (ECB), Europe's equivalent of the U.S. Federal Reserve, sets interest rates for lending the euro currency.

But it does not have control over fiscal policy -- how much each of the 16 member states of the eurozone tax their citizens and how much they spend.

The Brussels correspondent for The Economist magazine, David Rennie, says greater integration is not going to happen soon.

"Look at who is getting elected around Europe at the moment, look at public opinion," he said. "There is just not the support for that. So if the EU is saying the stark choice is between disintegration (of the euro) and greater integration, then they had better have a Plan B."

So far, Plan B has involved making informal attempts to harmonize economic policies across the eurozone. But Rennie says that in itself has exposed very different opinions between the Euro's two key members, France and Germany.

"If you speak to someone German or in the Germanic camp, they say it's simple," Rennie said. "They say we need Germanic-style rigor and discipline, and people need to live within their means and not borrow and spend too much."

But those in the southern Europe bloc led by France have a different idea.

"They also say it's simple," Rennie said. "We need redistribution from rich to poor and low borrowing costs to countries being fleeced by evil wicked Anglo-Saxon speculators."

These disagreements have slowed the European response to the Greek crisis, and continue to split the continent in terms of how to move ahead.

But what of the countries that are seen as the problem, known by their unfortunate acronym, the PIGS: Portugal, Italy, Greece and Spain?

South Must Learn From North

In a small restaurant on a cobbled street in the shadow of Lisbon's Se Cathedral, a performer sings fado, the music genre of the traditional Portuguese lament. Though not as profligate as Greece, Portugal still has plenty to lament about its financial predicament, including lax collection of taxes and a bloated public sector.

Miguel Judice, president of the Portuguese Hotel Association, is sitting listening to the music. He loves the euro. It brings so many benefits to the country, he says, and being part of the euro has made it much easier for tourists to come to Portugal.

But he admits things in Portugal need to change. "If you are living in a civilized country you need to pay taxes," Judice said. "They're better at that in Sweden than in Portugal."

Judice says there is no doubt that in financial matters and tax affairs, southern Europeans need to learn from their Northern cousins.

Even so, observers have been encouraged that there have been almost no protests so far at the austerity measures proposed in Portugal, and that demonstrations in Greece have died down.

It seems the PIGS are prepared to take their medicine, but it is likely to be a long haul. As one commentator described it, the patient's life has been saved, but even when he comes off the ventilator, he's going to be in bad shape.

Change Is Needed, But What Exactly? 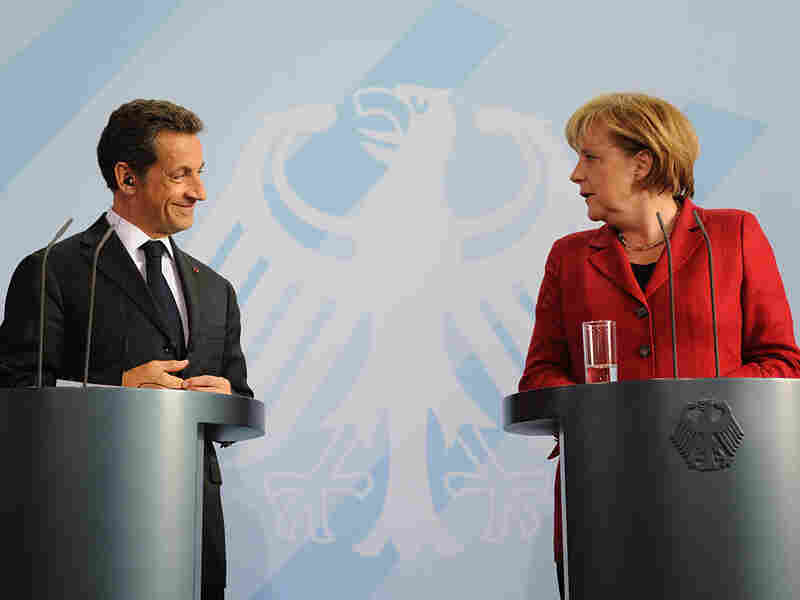 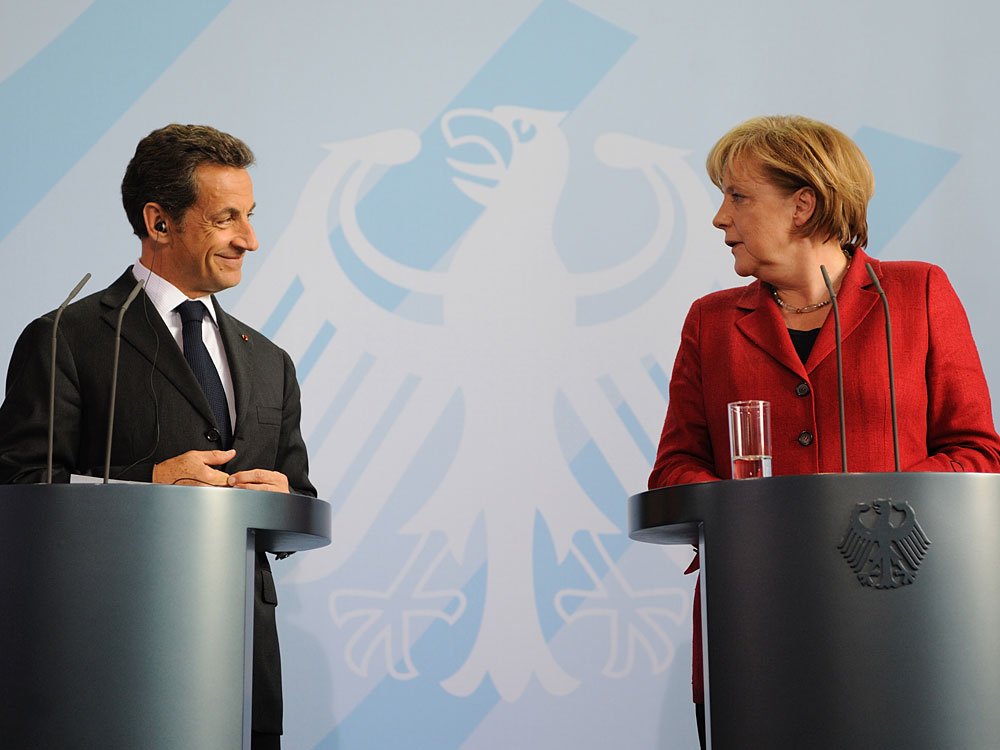 French President Nicolas Sarkozy (left) and German Chancellor Angela Merkel address a press conference in Berlin on June 14. France and Germany are at loggerheads over how to run European economic policy.

Portuguese economist Camilo Lourenco says there is no alternative to radical change in countries like Portugal.

"Either we change or we will be left behind," he said.

Leaving the euro, with its low interest rates and low inflation -- and its higher profile in global financial affairs -- is too dire to contemplate. Lourenco thinks greater EU integration is imperative.

"I do think we need to create an EU treasury, a ministry of finance in Brussels," he said. "A single currency will not survive if you have 16 different countries spending as they please."

An increasing number of economists say the EU needs a regulatory authority to exert more fiscal discipline. But the view isn't shared among the broader populations of European countries.

European leaders reacted with emergency measures this spring and summer to bolster the currency and try to contain the debt crisis. For now, the euro has been saved, and with it the future of the European Union.

How To Move The European Experiment Forward

Many expected that currency union would lead automatically to greater political and fiscal union, but that is clearly not happening. Differences between countries have been papered over for years, but cannot be papered over any more.

Many experts still think that closer economic and political union are possible, and indeed likely. They point to the $1 trillion EU rescue package put together in May to save Greece and shore up the euro as an example of the motivation towards stronger union.

Andre Sapir is a senior fellow at Bruegel, an economic think tank in Brussels.

"Even if you don't write the words 'political union' on the check you are writing for a trillion dollars, to me it sounds like a step towards fiscal union, and what is fiscal union if not the beginning of political union?" Sapir says.

On A Knife Edge

Other experts disagree. David Marsh, a former reporter for the Financial Times, who is now a banker, says there is no doubt that the euro is on a knife edge. Marsh, author of a book entitled The Euro: The Politics of the New Global Currency, says the eurozone could find some way to hold together, and resolve its differences, but he says he wouldn't be surprised if it broke up.

However, he doesn't believe it would necessarily be the weaker economies, such as Greece and Portugal, that would leave. It could be the stronger nations such as Germany who decide they don't want to go on picking up the tab, and opt out of the euro currency.

"Either way, it would be an immense parting of the ways for Europe and a demolition of the European ideal," Marsh says.

Eastern European, Baltic and Balkan nations are still lining up to join the euro, a vote of confidence from some of those smaller countries on the fringes of Europe.

But there is no doubt that the currency and the whole extraordinary European experiment are under threat. They were begun to provide stability and harmony in a continent that suffered conflict and disharmony for much of the 20th century.

Now, the euro is stuck: unable to go backwards because the countries are integrated too far. But also unable to go forward, because of those same deep-rooted national histories that the EU and the euro were set up to overcome.